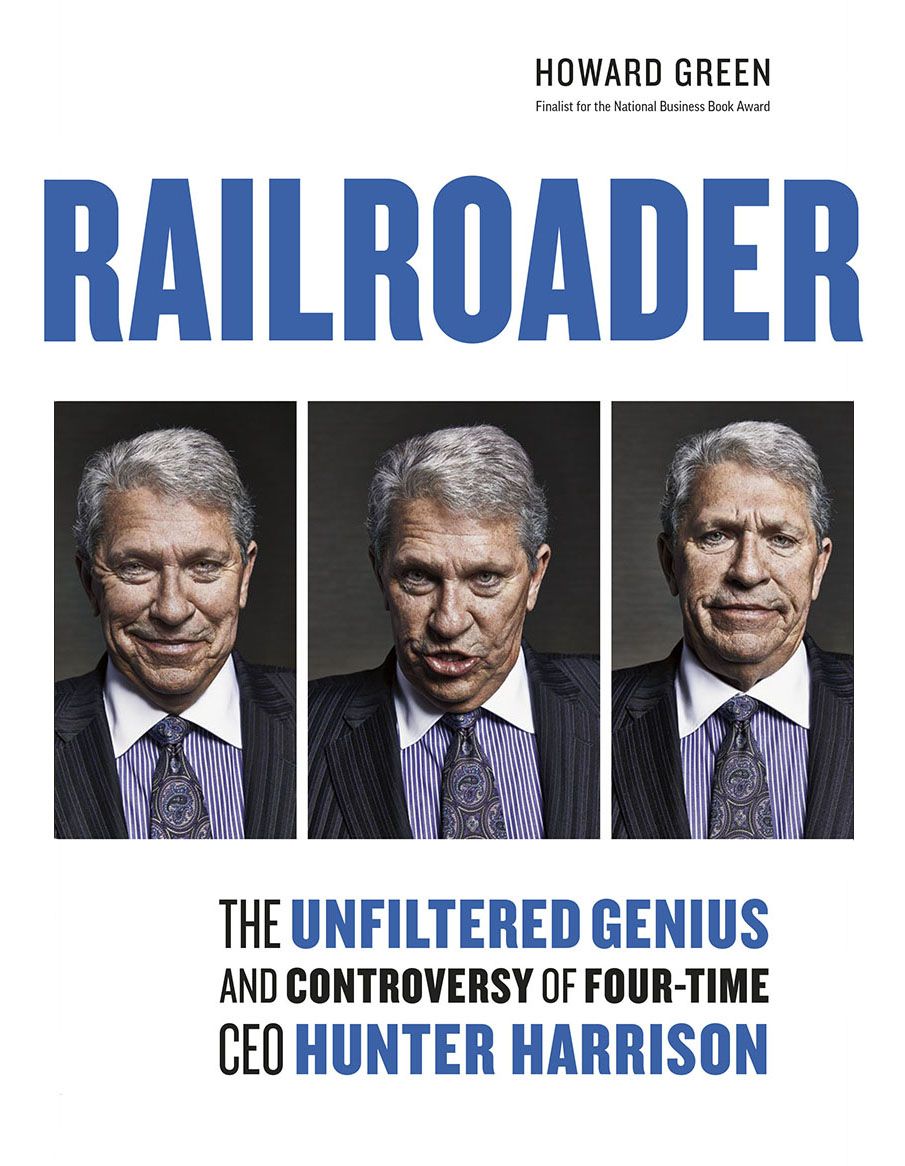 From the bestselling author of “Banking on America: How TD Bank Rose to the Top and Took on the USA” and “Distilled: A Memoir of Family, Seagram, Baseball and Philanthropy” comes the insightful biography “Railroader: The Unfiltered Genius and Controversy of Four-Time CEO Hunter Harrison.”

A deeply perceptive look into the life and personality of one of the most successful, yet polarizing, characters in the railroading business, “Railroader” draws from many extensive conversations that author Howard Green had with not only Harrison, but also more than 70 of his family and colleagues, over the course of several years. Green delves into how Harrison’s youth shaped his life and shares intimate, candid stories from those in Harrison’s professional and personal lives. Green, a 33-year veteran of broadcast news and a deft interviewer and writer, doesn’t shy away from noting Harrison’s flaws as he explores the CEO’s innovative and hard-nosed management style. But he also reveals Harrison’s softer side as a family man and mentor to many. The result is a compelling and deeply personal look into the life of a man of remarkable achievement.

Praise for “Railroader: The Unfiltered Genius and Controversy of Four-Time CEO Hunter Harrison”
“A riveting, up-close profile of one of the most successful and controversial CEOs of the modern era. ‘Railroader’ is a master class in sharp-elbowed management in a fabled industry. Part hard ass, part mentor, part preacher, Hunter Harrison goes from one railroad to another to another, turning them all around and creating conflict everywhere he went. You won’t be able to put this book down.” – Ali Velshi, Anchor, MSNBC and Business Correspondent, NBC News

Green conducted more than 170 hours in interviews with Harrison for “Railroader,” allowing him unique insight into what made the controversial and driven executive tick. The book shows just why Harrison was such a divisive character, inspiring either love or hate in those who worked with and for him. Harrison was famed for producing financial results for shareholders and reshaping companies in dramatic ways, but he was also criticized for his blunt manner and bold decisions.

The book follows Harrison from his early days working on the railroad to his rise to CEO of Illinois Central, CN, CP and CSX, detailing a wayward teenager who found his purpose in the railroad industry and ended up one of the most richly compensated executives of the business. Green focuses on Harrison’s personality and impact rather than the details of business deals and boardroom battles, but he includes plenty of corporate intrigue and discussion of Harrison’s business strategies.

More praise for “Railroader: The Unfiltered Genius and Controversy of Four-Time CEO Hunter Harrison”
"’Railroader’ presents both a fascinating business story with global resonance and a very personal tale of a life fully lived in a 'no-holds barred' fashion to the very end. It is a brilliant profile of an enigmatic, somewhat obsessed, railroad mercenary, who turned his industry on its head, with new benchmarks for future generations of leaders. Lots of juicy learnings throughout."  - Calin Rovinescu, president & CEO, Air Canada

"Revered and reviled, Hunter Harrison was a CEO like no other. He transformed North American railroads. He repriced executive compensation. He ignited debates about safety and competitiveness, and left us all debating the price of precision… In ‘Railroader,’ Howard Green captures the man in full, with an intimate yet nuanced portrait of an uncompromising, compulsive executive whose legacy both endures and confounds."  - John Stackhouse, senior vice-president, RBC, and former editor-in-chief, the Globe and Mail

About the Author
Howard Green was a broadcast journalist for 33 years, best known as founding anchor at Canada's Business News Network, where he hosted the flagship interview program, Headline with Howard Green. During his almost fifteen years at BNN, he conducted more than 14,000 interviews, many with leading CEOs and the biggest names in business and politics, including Sir Richard Branson, Federal Reserve chairman Alan Greenspan, and former British prime minister Tony Blair. Prior to that, Green spent eighteen years as a correspondent, producer, and director making programs for a variety of networks, including the Canadian Broadcasting Corporation and PBS. Green is a two-time Emmy nominee and winner of Canada's top television prize for his documentary work, and his films have been broadcast worldwide. In 2013, Green became a bestselling author with the release of his first book, “Banking on America: How TD Bank Rose to the Top and Took on the USA.” His second book, “Distilled: A Memoir of Family, Seagram, Baseball and Philanthropy,” co-authored with Charles Bronfman, was also an instant Globe and Mail and Toronto Star bestseller and finalist for the National Business Book Award. Howard Green lives in Toronto.