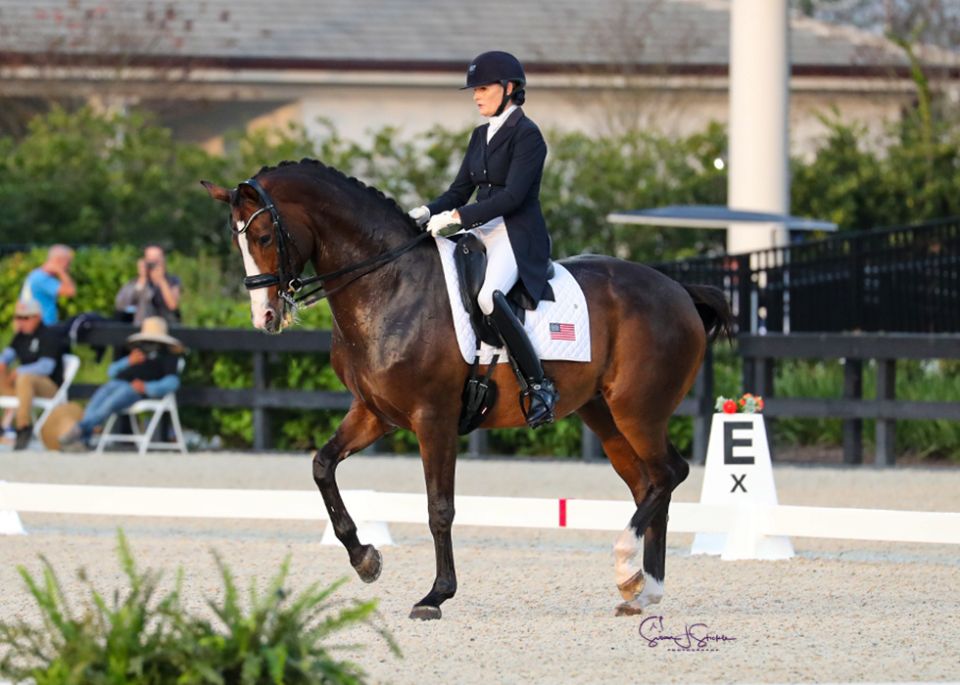 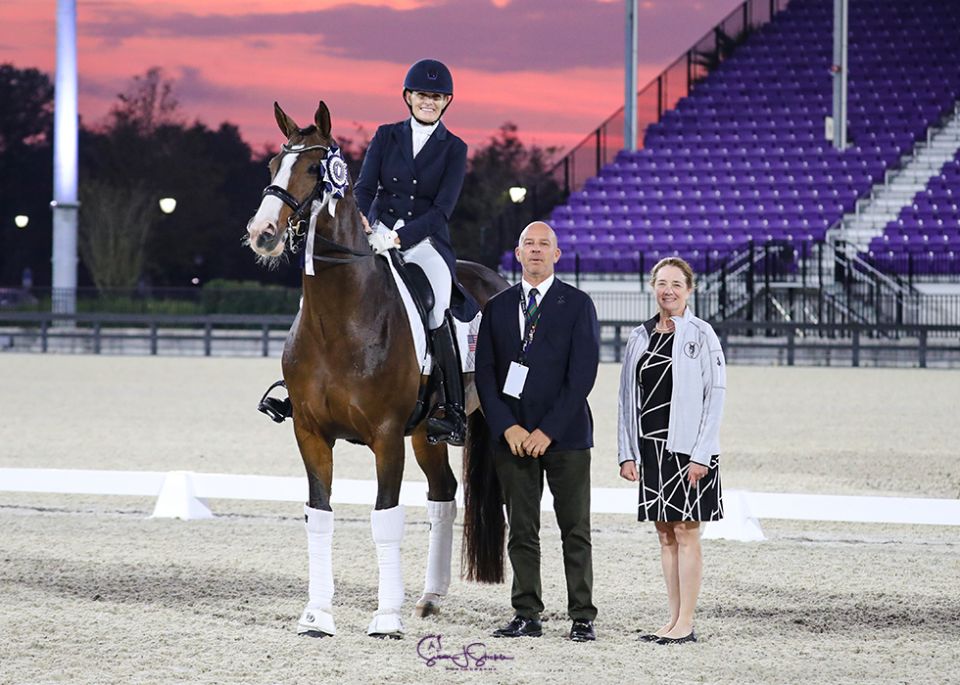 Ashley Holzer and Havanna 145 in their winning presentation with judge at C Peter Storr and show manager Debra Reinhardt.
Photo by SusanJStickle.com 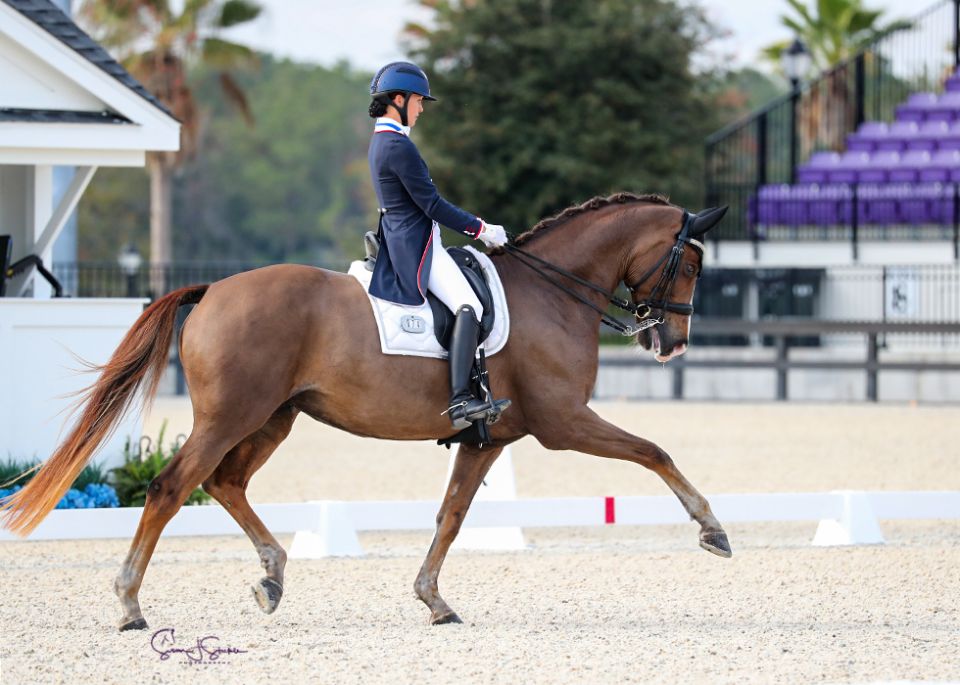 Jessica Howington and Cavalia won the Grand Prix to Special or Freestyle CDI3*.
Photo by SusanJStickle.com 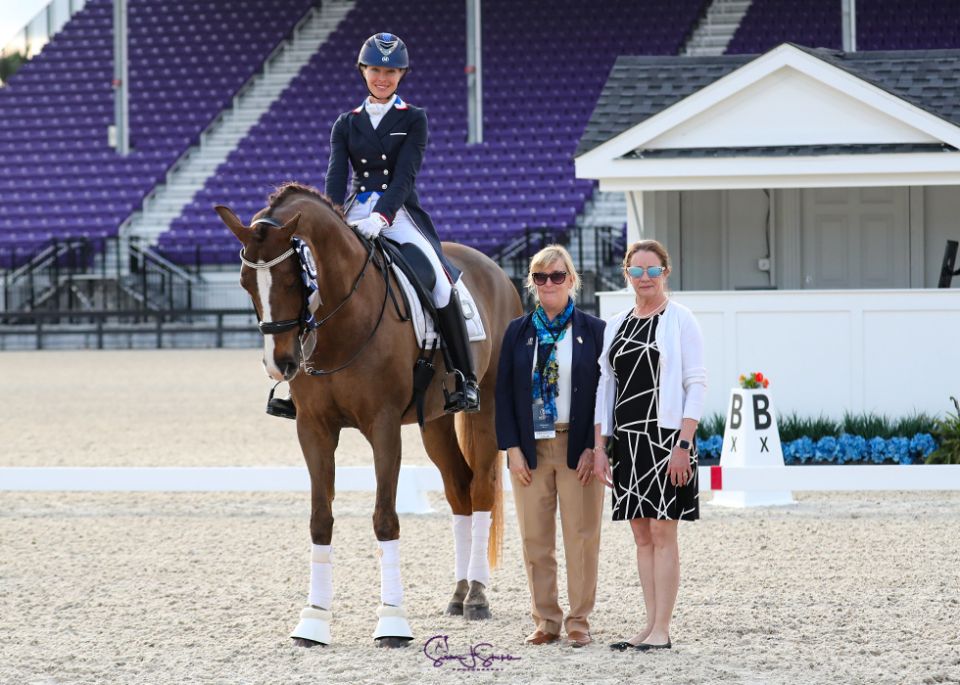 Jessica Howington and Cavalia in their winning presentation with judge at C Sarah Geikie and show manager Debra Reinhardt.
Photo by SusanJStickle.com 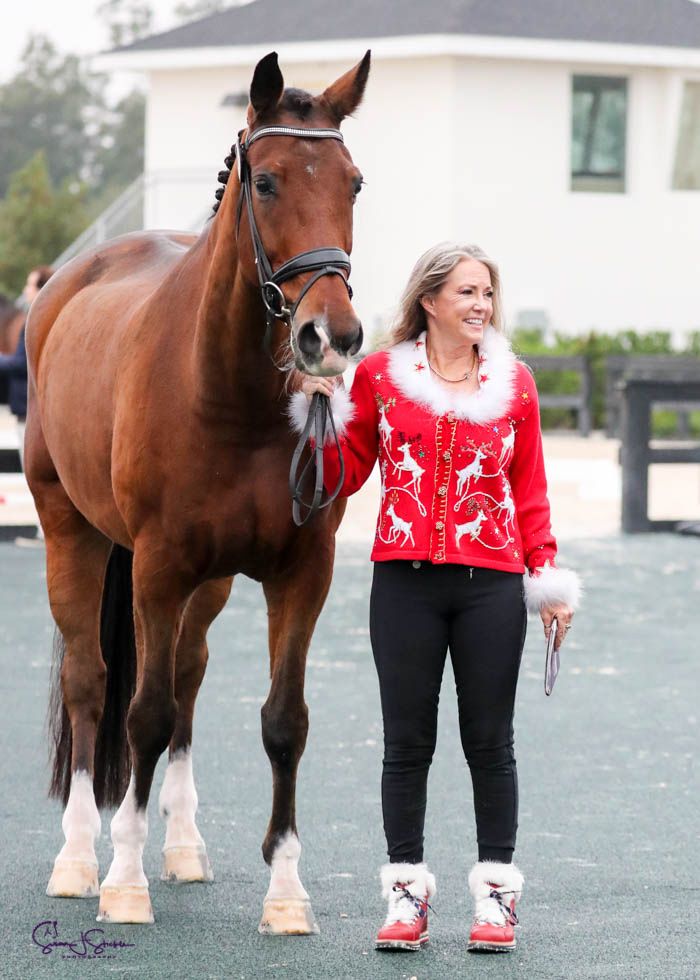 Four-time Olympian Ashley Holzer rode Havanna 145, a 14-year-old Hanoverian mare by Hochadel x Rodgau owned by Dr. Diane Fellows, to the win in the Grand Prix to Freestyle CDI-W with a score of 70.342%. Second place went to Katie Duerrhammer (USA) and Kylee Lourie’s Quartett, who scored 69.000%. With a score of 68.816%, Mikala Munter (USA) and her own Salsa Hit were third.

While the first two CDIs of 2021 were held in the indoor arenas at WEC – Ocala, this week’s competition is being held outdoors in the Derby Stadium. The impressive setting was new for horses and riders and gave the competitors a different experience.

“It was a big difference, and she was much more tense out here,” said Holzer of her horse going from the indoor arena to the outdoor stadium. “But that’s great. This is why we have to get out at horse shows where they have great venues like this, where we can see what our horse will do. Europeans show pretty much every weekend, and we don’t have that luxury here.”

Holzer noted that the experience helped her learn as a rider and a trainer. She recalled, “I came in like gangbusters and then realized, ‘Oh God, I’m on a hot tamale! This is not going to work! I’ve got to tone it down.’ Then you feel the horse come back to you, and it’s an incredible feeling. Every time out there, you learn something.”

Holzer expressed her gratitude for the support of her owner, Dr. Diane Fellows, and her support team, plus the team at World Equestrian Center.

“I’m very grateful for the Roberts family for having this incredible facility and for allowing us to have these great shows to come to, and all the organizers that make it possible for us, especially right before Christmas,” she said.

The winners of the Grand Prix Freestyle CDI-W in October at WEC – Ocala, Holzer and Havanna 145 will return to the ring tomorrow evening for the highlight class of the week.

Second-place finishers Duerrhammer, of Greenwood Village, Colo., and Quartett, a 13-year-old German Sport Horse gelding by Quaterback x Dream of Glory, were competing in their first short Grand Prix test. Duerrhammer has been partnered with the liver chestnut gelding for almost three years and noted that last weekend was the first anniversary of the horse’s first time competing in the grand prix. Tomorrow’s Grand Prix Freestyle CDI-W will be their first time riding their freestyle in a CDI.

“Overall, I was quite happy with him,” said Duerrhammer. “He was very attentive and tried really hard. The quality of things was good; it just needs to get cleaned up a little bit and get some more run-throughs of the actual test. We’re very excited to be under the lights tomorrow night.”

This was also Duerrhammer’s first time competing at World Equestrian Center – Ocala. She was complimentary of the facility for a variety of reasons. “It’s really incredible,” she affirmed. “The stabling is lovely, the footing is incredibly consistent everywhere, and it’s really horse friendly and very spectator friendly. My owner was able to fly in from Colorado and enjoy the amazing hotel, the spa, and the restaurant and have the experience, not just a horse show.”

Howington and Cavalia, a 14-year-old KWPN mare by Sir Donnerhall x I.P.S. Gribaldi, won with a score of 69.196%. Pablo Gomez Molina (ESP) and Cristina Danguillecourt’s Ulises de Ymas placed second on a score of 68.304%, while Maria Alejandra Aponte (COL) and Duke De Niro were third with 66.413%.

Howington was excited to ride in the outdoor stadium but did contend with nerves – both Cavalia’s and her own.

“The stadium is amazing,” she said, “but she’s not used to this. She’s hasn’t been to any big, huge venues ever, other than Global. There was a little bit of tension, but I was really happy with my ride. It was probably on my part too. I get nervous too. I take a deep breath and try to focus, try to imagine it’s just me and her out there and we’re at home riding and nobody’s watching. It’s hard to do that, but I try.”

Howington worked through any nerves and complimented her horse’s ability to achieve a solid test.

“In the trot work, she really stayed with me the whole time, and I was able to ask questions and she answered them,” she described. “Overall, it gave us a little more energy, which was good. The trot work today was amazing. It was some of the best she’s given me because she really stayed with me, and I was really proud of her for that. In the canter work, we had some mistakes, but there’s always the next day.”

Howington and Cavalia will compete next in the Grand Prix Special CDI3* on Saturday afternoon. The passage to extended trot movements featured in the Special test are Howington’s favorite and a place for Cavalia to show off.

“She has such phenomenal passage when she’s really in it,” said Howington. “Her extended trot is amazing. It’s two of my favorite things on her back to back. We get to do it a lot in the Special, so that’s fun. I’m hopefully going to be working on a freestyle for [winter] season, so I might start switching things up, but we’ll see.”