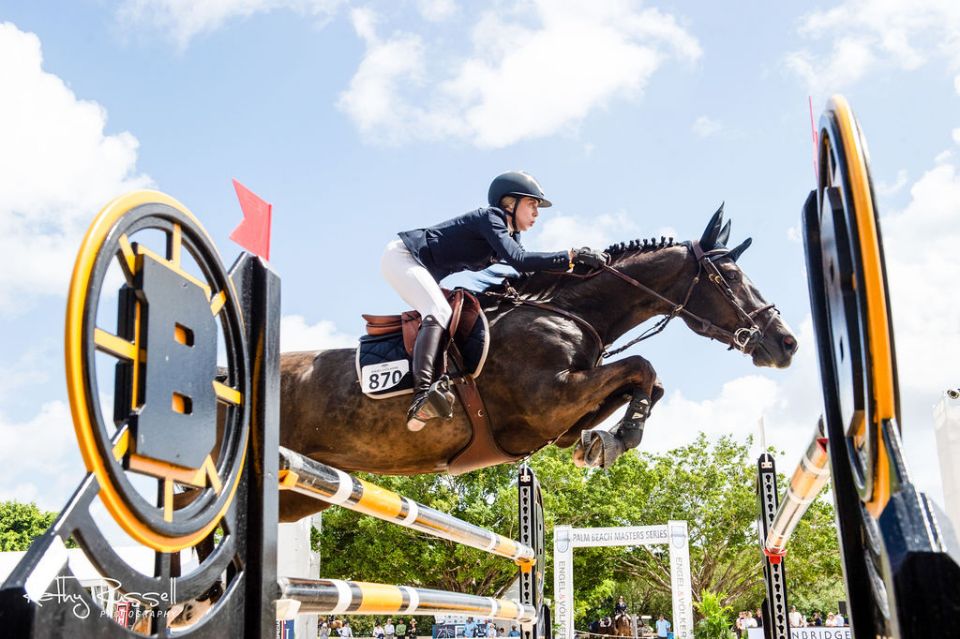 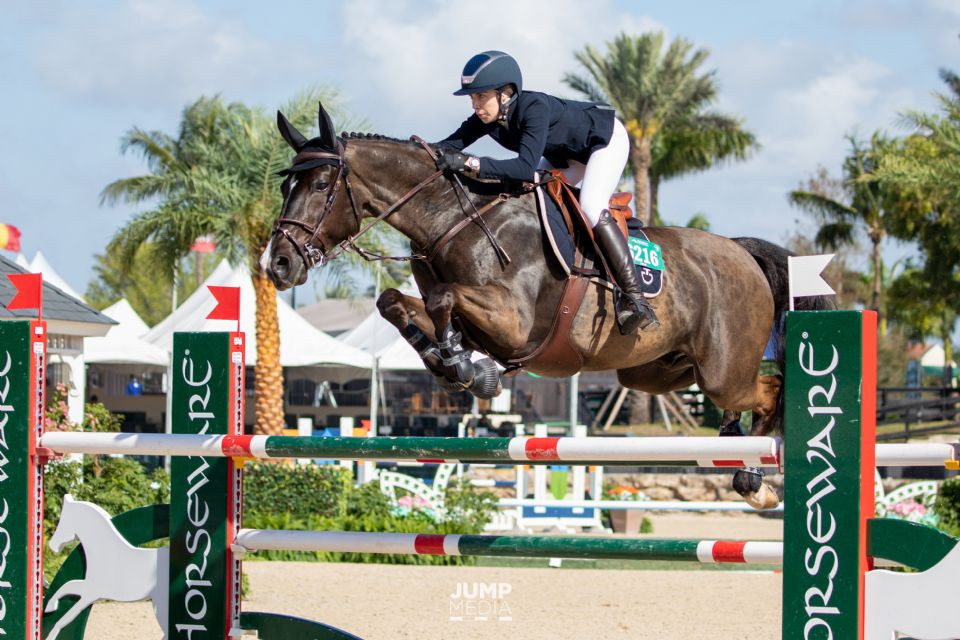 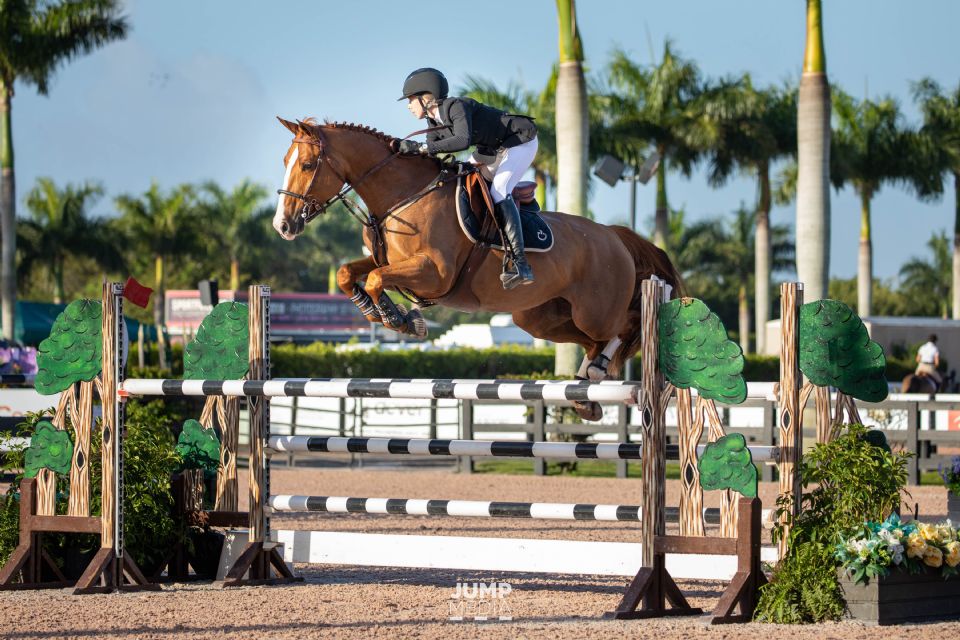 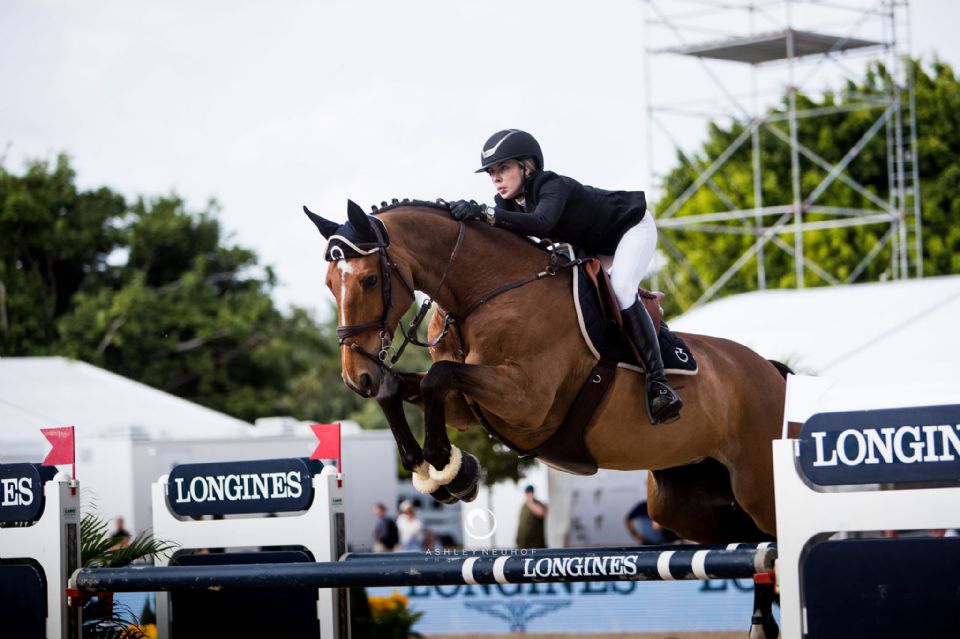 In 2010, show jumper Hannah Selleck launched her own Descanso Farm as a boutique breeding and training operation. Now, following 10 years of success and most recently a strong winter season in Wellington, FL, Selleck and Descanso Farm have begun to transition the focus to the development of top-quality sales horses.

“Now felt like the right time to start to shift the direction of Descanso Farm,” said Selleck, who bases out of Thousand Oaks, CA, and Wellington, FL. “The youngest of our current babies, Corsica DF, is now five, and rather than riding as many young horses, I’m ready to focus on sales horses that are already going but need a little more finesse, need results, or that can improve in the Descanso Farm program.”

During week five of the Winter Equestrian Festival (WEF), Selleck and “Kasper” won the $2,500 1.35m Jumpers, and they followed it up with sixth place finish out of 80 entries in the $8,000 CSI2* Griffis Residential 1.40m Jumpers during WEF week nine.

The pair closed out their season with back-to-back clear rounds and a third-place finish in the $10,000 CSI2* Bruins Tour Qualifier on March 12 during the Palm Beach Open at Deeridge Farms in Wellington, FL. Selleck and Kasper were one of 76 entries to contest the speed class, and, as the 74th entry to jump, they shot to third place with a quick, clear round.

Watch Selleck and Kasper’s round here.

“He’s a really lovely horse; it’s been a great match,” said Selleck of Kasper, who she describes as well-suited for a high junior/amateur-owner jumper or a young rider looking to contest under-25 competitions. “Following a serious injury in the summer of 2018, I had to work hard to develop a relationship with a new horse. Kasper and I have moved up through the jumper divisions easily thanks to his talent and character. I think he could be a perfect match for a competitive junior or amateur.”

In addition to developing Kasper as a sales prospect, Selleck continued to produce and compete promising Descanso Farm seven-year-old mare Rumpleteazer DF (by Flexible). The American Warmblood mare continually turned in clear rounds and accrued top ribbons in the Seven-Year-Old Jumper division at WEF, before concluding the winter season with a successful Fédération Equestre Internationale (FEI) debut at the Palm Beach Open, March 10-15.

“She matured a lot,” said Selleck of Rumpleteazer DF, who jumped clear in both of the CSI2* 1.20m classes that she contested at the Palm Beach Open. “Her six-year-old year, she was navigating the courses with the occasional four faults here or there, but never more than that. She never makes the same mistake twice; she’s really smart, and she seems to be on the same trajectory where she’s getting it done in the seven-year-olds and is ready to keep accelerating through the rest of the year.

“It was unfortunate that we didn’t get to do the young horse finals at WEF because of the show cancellation [due to COVID-19 risks], but Deeridge was a great way to end for both horses. They both came along really well,” said Selleck.

The winter season also marked the beginning of five-year-old Corsica DF’s show career on the East Coast, and simultaneously, the conclusion of an impressive eight-year show career with Selleck for Selleck’s long-time top mount, Barla.

“The plan was to retire Barla at the end of the winter circuit, but the plan is also always to put the care and welfare of my horses first,” said Selleck of the 16-year-old Oldenburg mare. “I first got Barla as an eight-year-old, and for the past eight years, she has taught me so much and has always tried her heart out for me. She's been my most trusted, challenging, and hugely talented partner. While I'll greatly miss having her in the show ring, I'm looking forward to this next chapter of Barla's life and seeing what fantastic foals she will have.”

With Barla retired from the show ring, Selleck now looks to continue to move Rumpleteazer DF up the ranks to be a consistent CSI2* and CSI3* contender in the mare’s eight-year-old year, as well as competing and developing a new small string of sales horses in partnership with Tal Milstein.