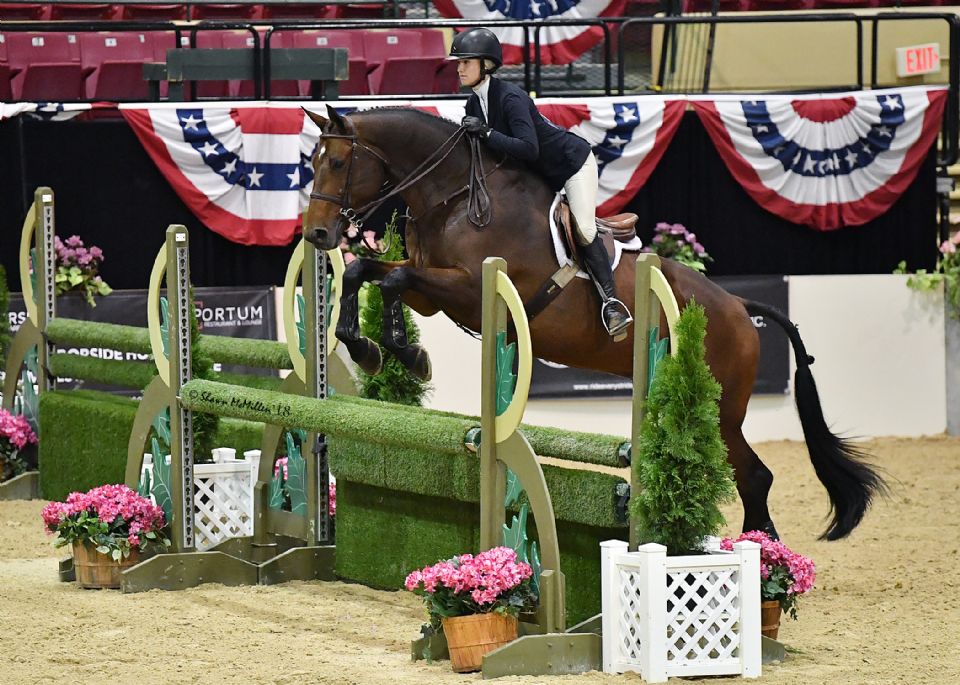 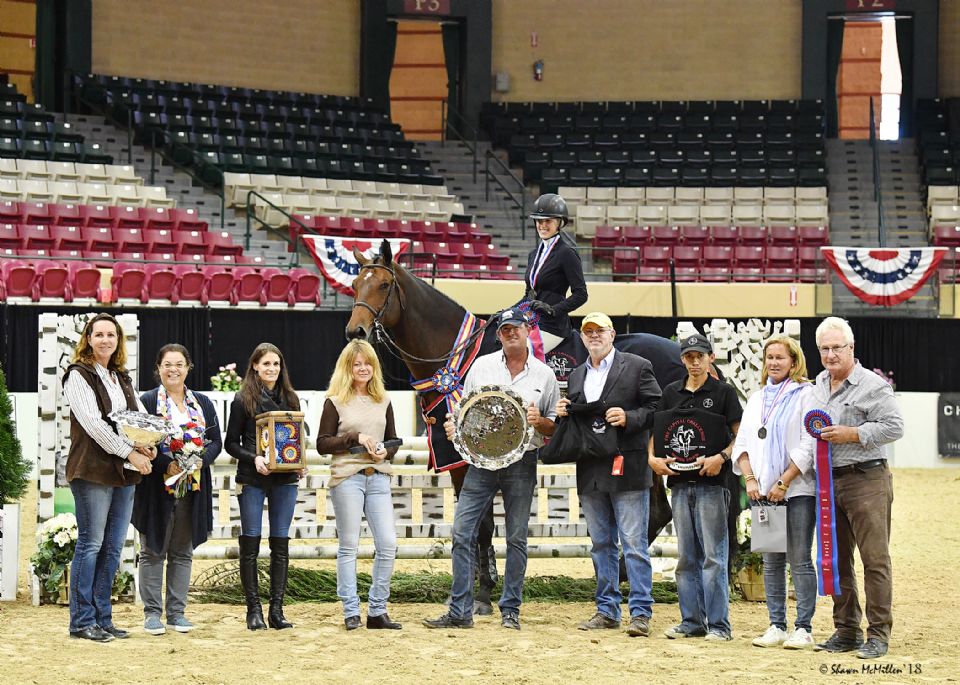 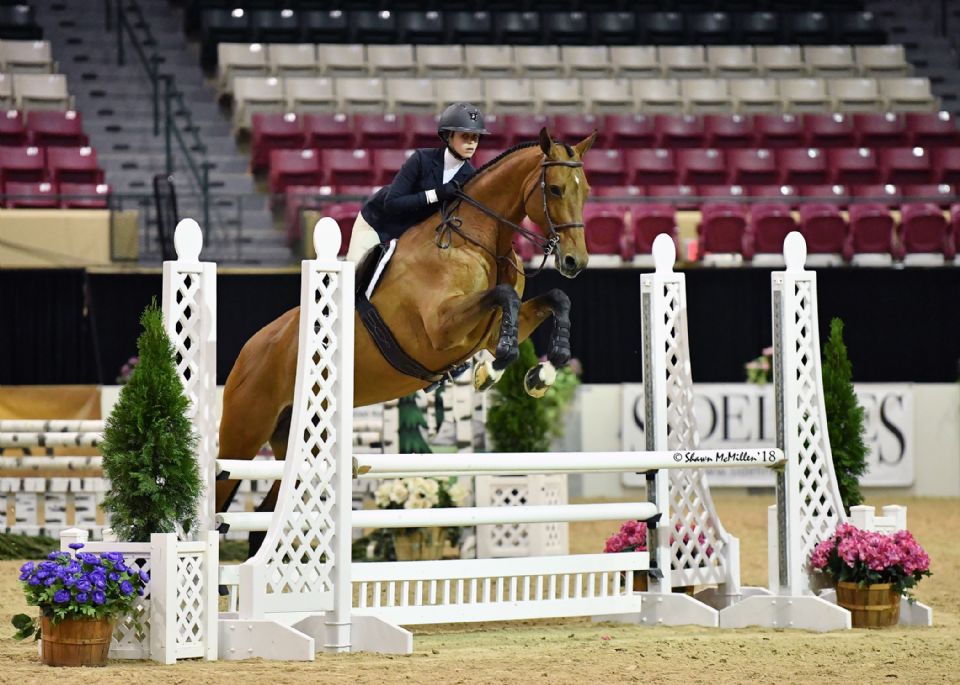 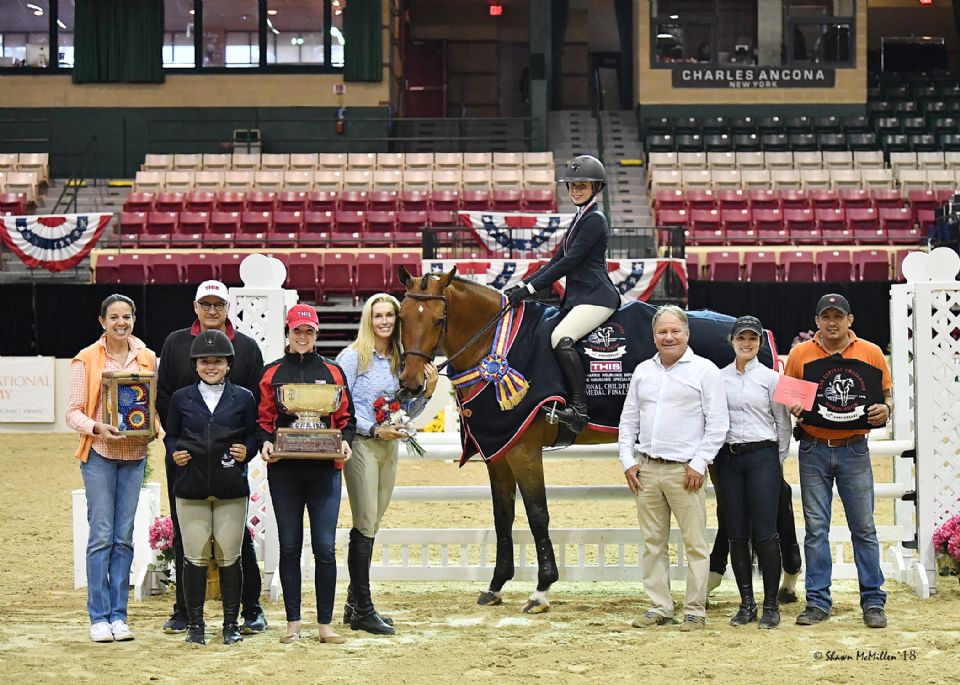 The 2018 THIS National Children's Medal Finals win was presented to Avery Glynn of Petaluma, CA.
Photo by Shawn McMillen Photography

From a field of 138 entries, Lyman was one of the top 20 to return to the ring for a second jumping round in the North American Junior Equitation Championships. When she returned, she executed the highest scoring round of the weekend – earning a 96 from one of the three panels of judges and an average score for the round of 94.66.

“I’ve only scored about a 93 before, so to get a little bit higher than that was really, really nice,” said Lyman, who trains with Ken and Emily Smith of Ashland Farms. “It was really good for my confidence too.”

That score shot her from second place to well into the lead with an overall score of 184.99. With more than two points separating her and eventual second place finisher, Madison Goetzmann of Skaneatles, NY, who earned an overall score of 182.25, no additional testing was deemed necessary, and the win was presented to Lyman. Third place went to Kaitlyn Lovingfoss of Santa Clarita, CA, who finished in third with a score of 179.41.

“The top 20 were all within about eight points; the top four – they just had to keep laying it down,” said course designer Ken Krome. “The girl who won was just flawless.  To me that put a gap on the field, and that was decisive. It’s nice to have a decisive winner.”

“It was amazing,” said Lyman of her win. “I was going to be happy either way, with whatever result I was going to end up with. We’re just gearing up for USEF Finals next week, and I wanted to have a good solid round to learn some more lessons before I go into the rest of the Indoors season.


“I did this class last year; it was my first year doing it, and it did not go as planned, so it felt good to come back here and get some redemption!” continued Lyman, who recently started her freshman year at the University of South Carolina where she competes on the school’s National Collegiate Equestrian Association (NCEA) team.

Lyman’s winning mount for the class was Efendi, a 10-year-old Holsteiner gelding owned by Don Stewart.

“I showed him a couple times this summer,” said Lyman of the gelding also shown by fellow junior competitor Brian Moggre. “Don let me use him for the week so that we could save my other horse, Cohiba VDL, for the USEF Finals next week, and then Brian’s going to gear back up and do him at Harrisburg.

“He’s a really special horse,” continued Lyman. “He’s so graceful across the ground. He has such a big stride that you get to go so slow, and he doesn’t move you that much at all in the air, so you really get to hold your position. He makes me look good; he did all the hard work.”

The EMO Equitation Trip of the Show, sponsored by EMO Insurance Services and presented to the rider with the highest scoring equitation round also went to Lyman.

The top 40 THIS National Children’s Medal competitors from across the country qualified to compete in the final at Capital Challenge, and the top 10 from Sunday’s first round then qualified to come back for the second round.

At the conclusion of the first round Glynn sat in second place with a score of 87.75 behind Katalina Rickard of Sherman Oaks, CA, who carried a score of 88.00. Sitting in third going into the second round was Amber Ayyad of Rancho Santa Fe, CA, on a score of 86.53.

“I was really nervous because I knew I wasn’t on top, but I was in a good place,” said Glynn, 12. “A lot of my friends were in that class, and I’d seen a lot of people be good at the beginning. There were a few inside turns, and I decided to take a few of them. It was a hard decision whether we wanted to or not, but I did what was right for me and my horse and was happy with my decision.”

Glynn had good reason to be happy with how her round played out, as an average score for the round shot her to the top of the leaderboard. When Rickard found a bad distance to the second to last fence on course, the top two came down to Glynn on a score of 175.75 and Ayyad on a score of 174.86. With less than two points separating the top riders, the judges called for additional testing.

Glynn and Ayyad both executed the test well, which incorporated a hand-gallop out of the line-up to an oxer, a trot fence, a halt, and a counter canter to vertical before picking up the sitting trot back into the line-up. While Ayyad earned the slightly higher test score, an 86.33 average, it was not enough to move her ahead of Glynn who scored an 86 on the test to secure the victory.

“It feels amazing to have just won the THIS National Children’s Medal Finals!” said Glynn, who took the win aboard Cocon 4, a nine-year-old Oldenburg mare owned by Glynn’s father, Ned Glynn. “I was so happy with my horse. This is her first time at Indoors ever. We imported her as a jumper. She’s just starting her eq career, and I was just so proud of her. She acted amazing tonight. I was just so excited, and it was amazing.

“We actually imported her as a grand prix horse for my dad,” continued Avery. “I started riding her, and she ended up being quieter than a normal jumper would be. I showed her in some of the small jumpers, and I really liked her, so we slowly started turning her into my eq horse!"

“At Maclay Regionals in Region Eight, they give out this scholarship that’s called the Shelby Drazan Memorial Award, and I was lucky enough to receive it,” said Avery, who trains with her parents, Hope and Ned Glynn out of Sonoma Valley Stables, and as well as recently riding with Elvenstar Farm and trainer Jim Hagman. “It really helped a lot. I’m just so grateful to have gotten it because we were probably not going to be able to bring my own horse here if I hadn’t gotten it.”

“Capital Challenge is one of my favorite shows,” concluded Glynn. “It’s just so special because it really brings the top horses and riders out of the whole country, and it’s just such a special experience to be able to compete with people that I don’t always compete with that are sometimes much better than me. It really challenges me.”

While Sunday marked the conclusion of Equitation Weekend, presented by BigEq.com, competition at the Capital Challenge Horse Show continues on Monday with the professional hunter divisions beginning at 7:30 a.m.

Now in its 25th year, the Capital Challenge Horse Show sets itself apart with a distinct and unique focus on preeminent hunter and equitation competition. Held each autumn at the Prince George’s Equestrian Center in Upper Marlboro, MD, the 2018 edition of the Capital Challenge Horse Show will take place September 28 – October 7. The ten days of competition will include prestigious equitation events and the World Championship Hunter Rider (WCHR) Finals with many of the country’s best horses and riders competing in junior, amateur, and professional hunter divisions. For more information, visit www.capitalchallenge.org.