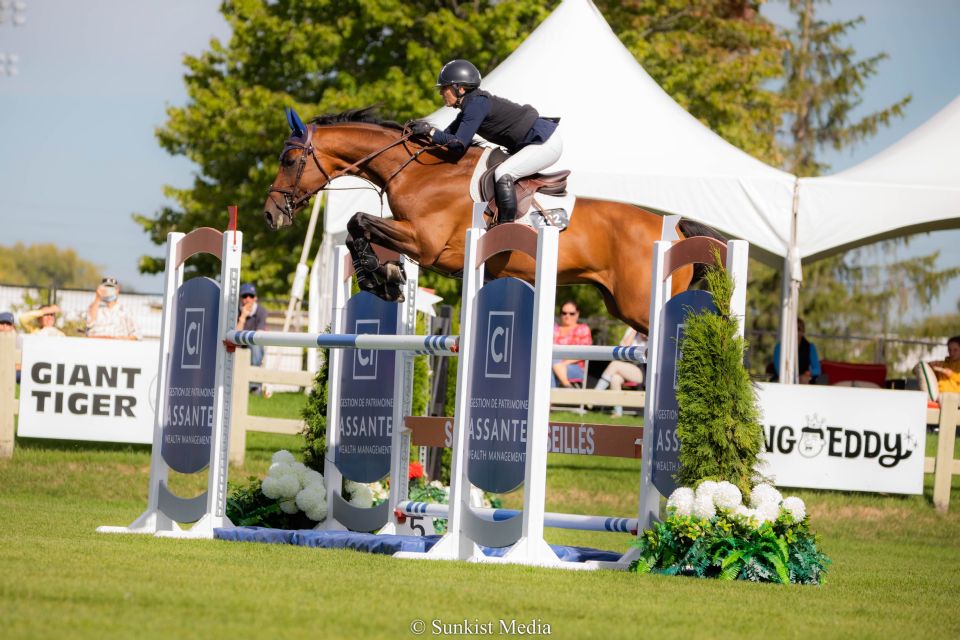 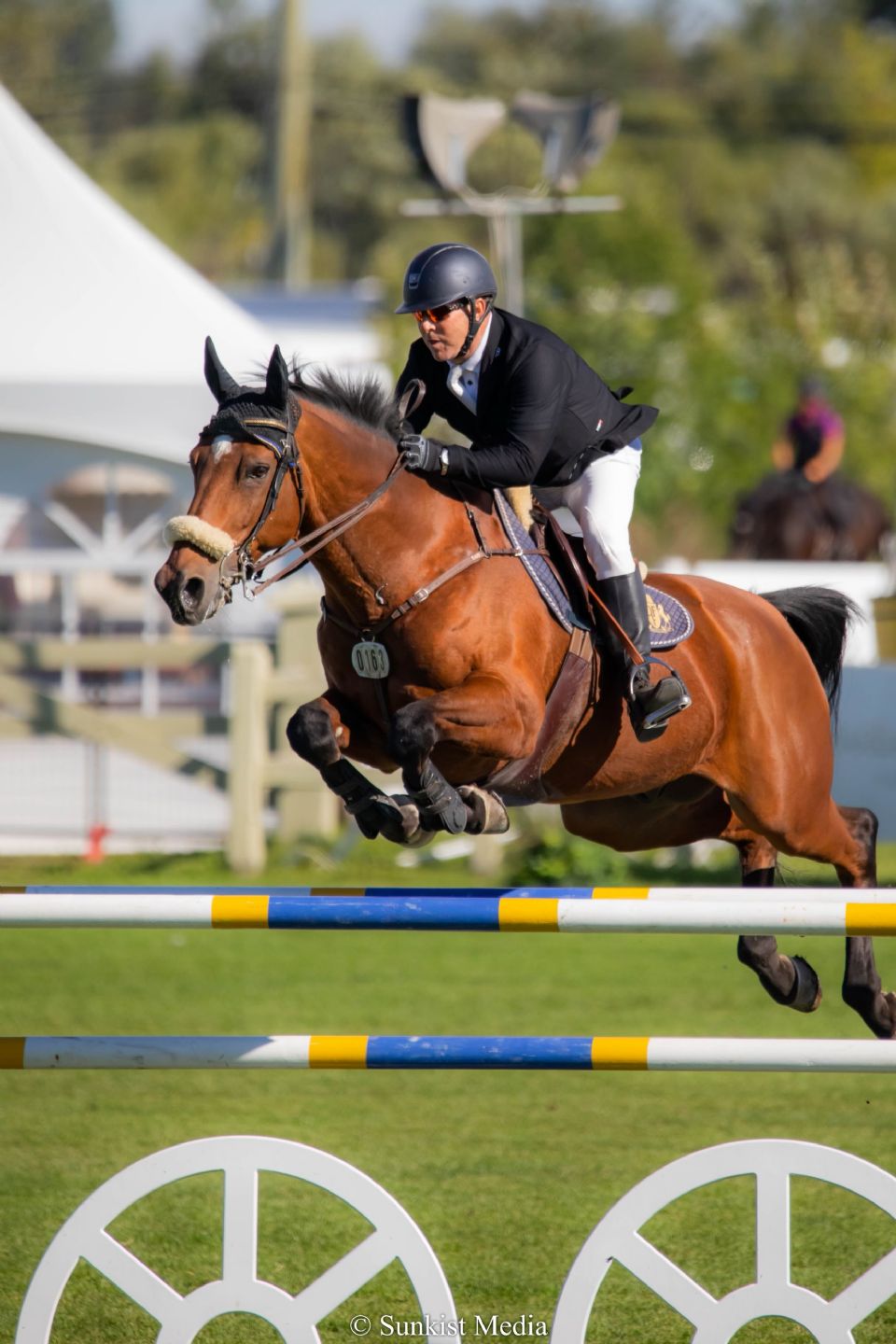 Grant Field of Russell, ON, riding Baffin finished second in the $20,000 Grand Prix held during the Ottawa National show jumping tournament at Wesley Clover Parks in Ottawa, ON.
Photo by Sunkist Media 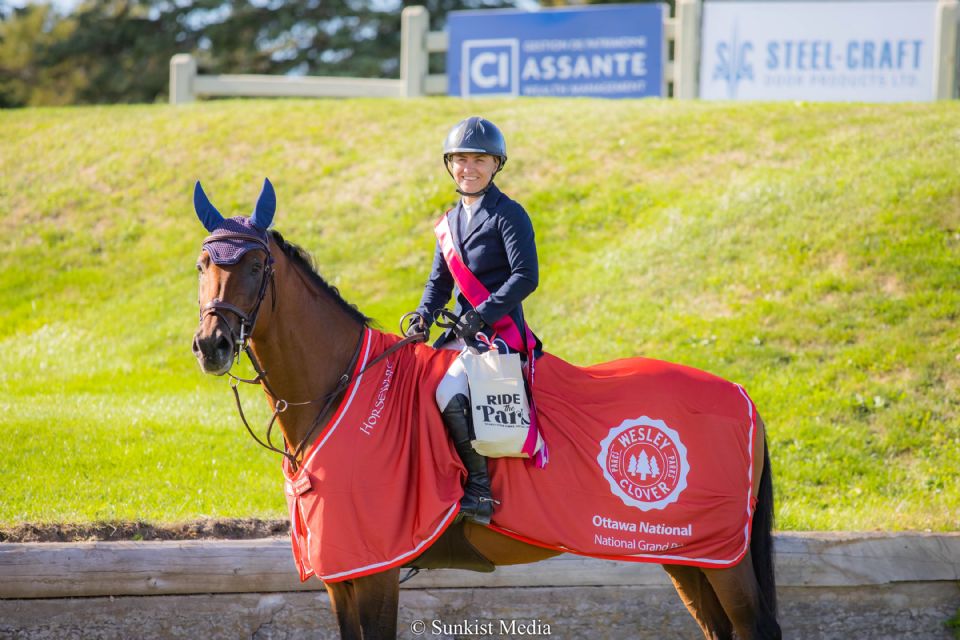 Lauren Hayes and Golden Boy are presented as the winners of the $20,000 Grand Prix.
Photo by Sunkist Media

Lauren Hayes of Mono, ON, riding Golden Boy won the $20,000 Grand Prix at the Ottawa National show jumping tournament on Saturday, September 18, 2021, held at Wesley Clover Parks in Ottawa, ON.

Doubling her chances for victory, Hayes entered two horses in the Grand Prix and qualified both for the jump-off.  She was joined by four other horse-rider combination who also jumped clear over the track set on Wesley Clover Parks’ grass field by Canadian course designer, Pierre Burch.  Five more entries also left all the rails in place but exceeded the tight time allowed of 72 seconds to miss qualifying for the jump-off.

Hayes was first to return for the jump-off with Icon NR, an eight-year-old gelding (Lupicor x Numero Uno) owned and bred by her family’s North Ridge training and sales business.  A tight turn back led to having one rail down, eventually leaving the pair in sixth place with a time of 45.75 seconds.

By the time Hayes returned as the final jump-off challenger with Golden Boy, the lead was held by Grant Field of Russell, ON, with a clear round in a time of 44.31 seconds aboard Baffin, his 16-year-old Polish-bred gelding (For Keeps x Bachus).  Knowing exactly what she had to do to win, Hayes turned on the gas to power over the course and through the finish line in 43.82 seconds to claim victory.

“I didn’t get to see Grant go because I was getting ready, but knew I had to go clean and a touch faster,” said Hayes, 41, on what it took to win.

With the only other double clear effort, 16-year-old Olivia Blaber of Ottawa, ON, finished third riding her 10-year-old Canadian-bred gelding, Mauna Lani, with a time of 44.48 seconds.

Hayes and her winning mount, Golden Boy, have been partnered together since April.  The horse originally came to North America this winter as a sales prospect for the annual VDL Auction held in Wellington, FL.  After sustaining a cut on his leg during the transatlantic flight, Golden Boy was unable to take part in the auction.  Instead, owner VDL Stud of the Netherlands opted to send the horse to Canada with Hayes at the end of the winter circuit.

“They put their faith in us, and the horse has been amazing; every time he walks in the ring he comes to play,” said Hayes whose father, Jay Hayes, represented Canada in show jumping at the 1992 and 2000 Olympic Games.  “Golden Boy loves the grass field at Wesley Clover Parks.  He’s got a big gallop and a big step, and it’s nice to have the big field in to jump in.  The atmosphere was great.”

The Hayes family has also played the role of competition organizers and formerly ran show jumping tournaments on the site which is now known as Wesley Clover Parks.

“They always do such a great job here, it’s kind of like coming back home a little bit,” said Lauren Hayes of being at the Ottawa National tournament.  “We came with 10 horses, and they’ve all had a super week.  It definitely made the trip worthwhile.”

Lauren Hayes also competed at Wesley Clover Parks with her winning mount, Golden Boy, during the two-week Ottawa Summer tournament in July.  The pair enjoyed top 10 finishes in three of the four featured open jumper classes, including a seventh-place finish in the $75,000 RBC Grand Prix on July 24.

The Ottawa National show jumping tournament, held from September 15 to 19, was the final event of the 2021 season counting for the Ottawa Circuit Awards.  All winners and special award recipients can be found at
https://www.ottawaequestriantournaments.com/ottawa-circuit-awards.