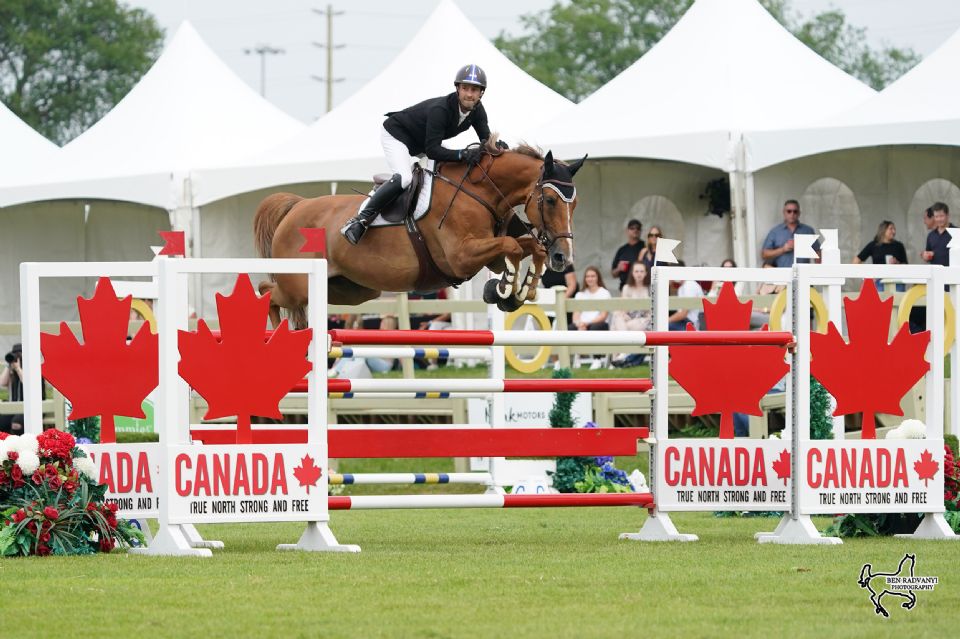 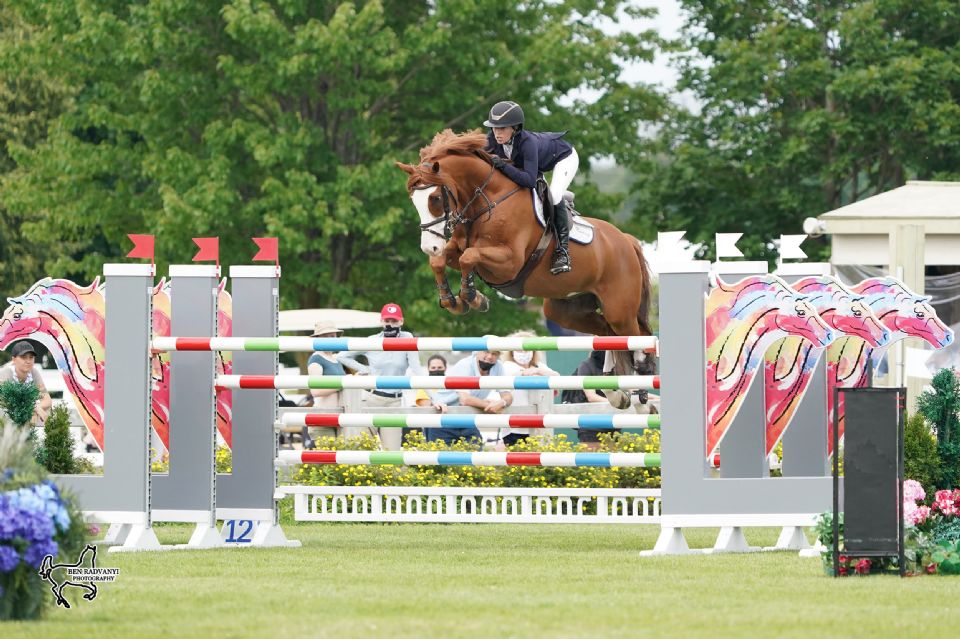 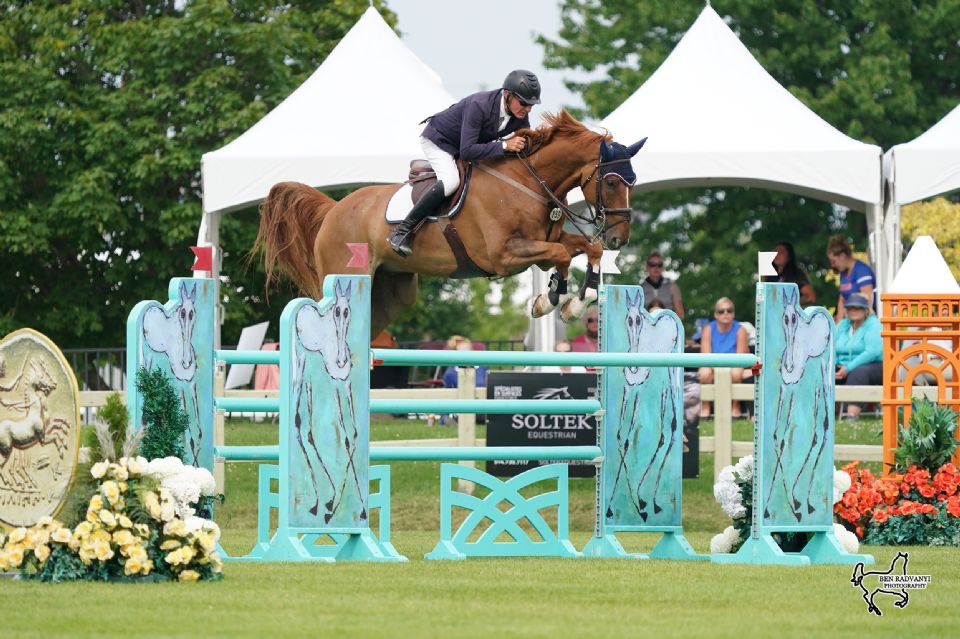 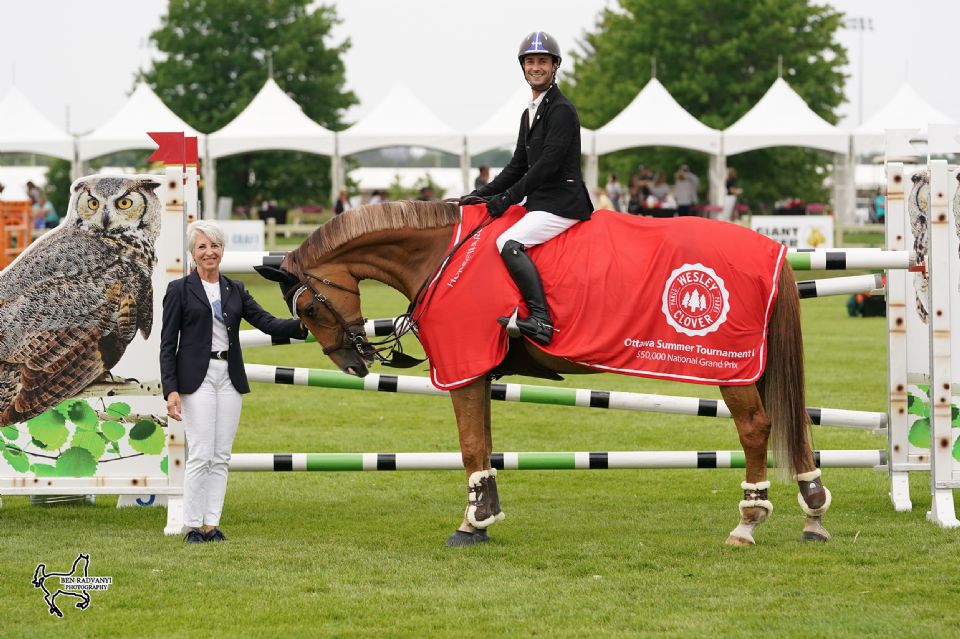 François Lamontagne is presented as the winner of the $50,000 Steel-Craft Grand Prix by Kim Mihalcheon, President of Steel-Craft.
Photo by Ben Radvanyi Photography

The highlight event of the first of two weeks comprising the Ottawa Summer Tournaments, the $50,000 Steel-Craft Grand Prix saw a total of seven riders produce clear performances in the opening round over the track set by Canadian course designer, Mike Pegg of Uxbridge, ON.

As the third rider to return for the tie-breaking jump-off on the expansive grass grand prix field at Wesley Clover Parks, Lamontagne of Saint-Eustache, QC, set the time to beat at 47.26 seconds with the first double-clear riding Chanel du Calvaire.

Ali Ramsay of Victoria, BC, followed suit with a clear jump-off round riding Lutz, a 12-year-old Westphalian gelding (Lordanos x Pilot) owned by Ramsay Equestrian Inc., but fell short of the target time when stopping the clock in 49.39 seconds.

As the last rider back for the jump-off, Mac Cone of King City, ON, had the final say.  Having qualified two horses for the jump-off, the Canadian Olympian had the advantage of having already ridden the shortened track once, but a time of 51.09 seconds left him third in the final standings with Con Couleur, a 10-year-old Mecklenburger gelding (Conthargos x Couleur Rubin) owned by Chadburn Holdings Inc.

The win went to Lamontagne, who had also claimed major victories on his previous two trips to Wesley Clover Parks in 2016 and 2017 with Chanel du Calvaire, his 13-year-old Belgian Sport Horse mare (Luccianno x Kashmir van Schuttershof).  This year, the pair also qualified for the jump-off in Thursday’s $20,000 Open Welcome, where they had four faults to place fifth.

“I made a mistake in the jump-off and I felt really bad about it; I didn’t sleep well, and was really hungry for today!” said Lamontagne, 37.

On his jump-off strategy for the $50,000 Steel-Craft Grand Prix, Lamontange said, “I didn’t want to go crazy.  First, it was important to jump it clear, and I wasn’t expecting the people coming after me to go crazy.  I wanted to go fast enough to put some pressure on, but I didn’t want to lose my head.”

The strategy worked, giving Lamontagne yet another win at Wesley Clover Parks.

“She has always been good on this field; she likes the size of this ring and she likes the grass,” said Lamontagne in praise of his mare.  “With maturity, she’s smarter and she’s better.  She doesn’t need to do so much to be efficient and do her job.

“It’s great to have such a nice horse show; they do such a good job here.  Everyone is excited to be here!” concluded Lamontagne, who will remain in Ottawa for the second week of the Ottawa Summer Tournaments.

As access to the competition site is limited to essential persons only, spectators are not permitted at this year’s Ottawa Summer Tournaments.  Fans can follow the action from the grand prix field via Facebook Live, presented by Mark Motors Group.  Sunday’s highlight, the $10,000 Soltek Modified Grand Prix, begins at 1 p.m. ET.

Week two of the Ottawa Summer Tournaments runs from July 21 to 25, 2021.  Highlights include: