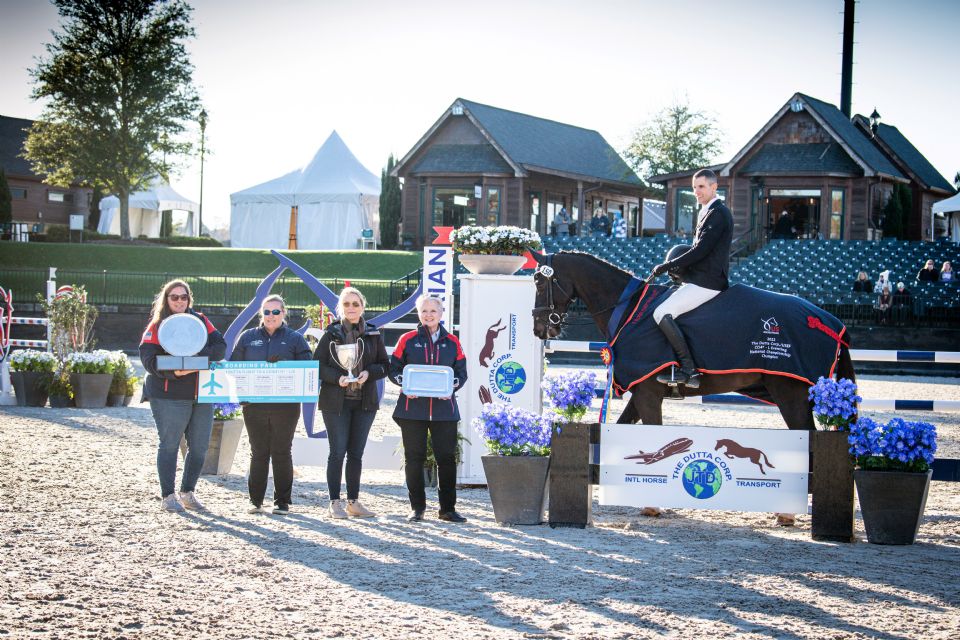 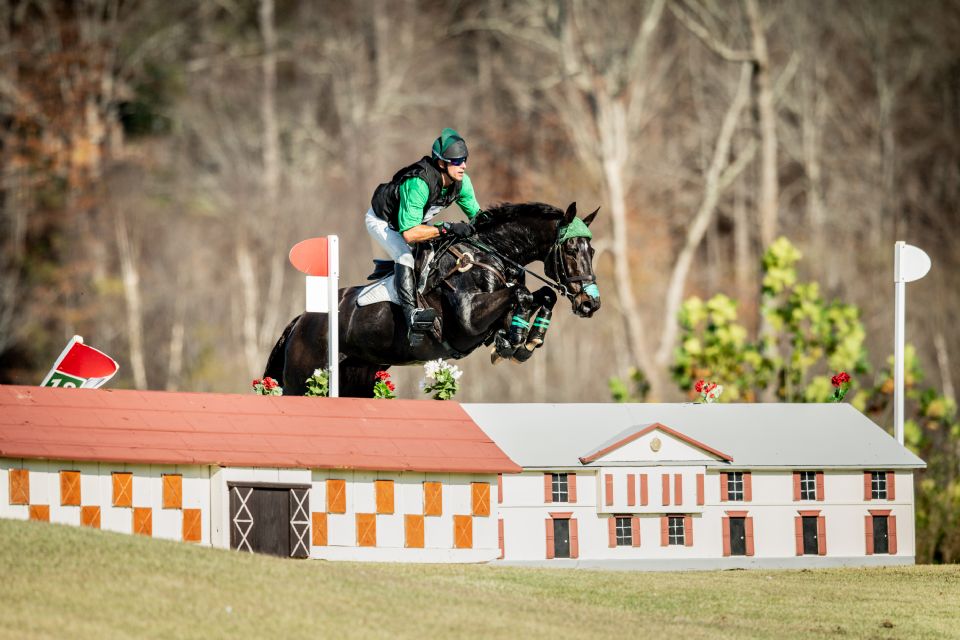 On November 13, 2022, amateur eventing athlete Dan Kreitl of Muncie, Indiana, received the United States Equestrian Team (USET) Foundation’s 2022 Gladstone Challenge Trophy for his win in the Dutta Corp. USEF CCI4*-L Eventing National Championship at Tryon International Equestrian Center in Mill Spring, North Carolina. The Gladstone Challenge Trophy was established in 1963 and is awarded to the winner of the fall four-star long national championship event. The trophy is inscribed annually with the winner’s name and permanently displayed at the USET Foundation’s headquarters in Gladstone, New Jersey.

Not only had Kreitl never competed in a four-star event prior to his win, it was also a first for his mount Carmango, a nine-year-old Westphalian gelding owned by Kay Dixon, known as ‘Fritz’ in the barn.

“I’ve never been prouder of the effort my horse put out,” said Kreitl of Fritz’s performance over the three days. “I pushed him for all he had on the cross-country course, and he gave 110%. There were a few jumps where I didn’t have a good ride, and he totally bailed me out. The thing I love most about this sport is the bond that’s formed with the horse and, with Fritz, the level of trust I have in him. It’s really fun. That bond between us got even stronger through this competition.”

Kreitl, a husband, father of two, and owner of a student housing business near Ball State University in Muncie, Indiana, always considered his riding a hobby. In middle school, he began riding dressage at a farm near his family’s home and progressed up the ranks to ultimately compete at the 2008 CN FEI North American Junior and Young Rider Championships (NAYC) in dressage before going to college. It wasn’t until he was 22 that Krietl first tried eventing and, around that time, he became acquainted with Kay Dixon who offered to sponsor Krietl’s eventing pursuits. As Kreitl and Dixon began to build a small string of horses, Kreitl’s dreams of competing at higher levels started to come into focus.

“Kay [Dixon] made this opportunity possible for me,” explained Kreitl. “I knew my goal [was to compete at the highest levels] but I often wondered if I could actually do it. Kay and I took steps [to acquire and develop young horses], and we thought maybe this isn’t just a pipe dream.”

With his dreams in reach, the 35-year-old rider began adjusting his work schedule to better accommodate his riding. While a majority of his time is still dedicated to his day job, he’s been able to concretely map out his long-term goals. As part of the prize for winning the CCI4*-L National Championship, Kreitl scored a ticket to transport a horse to Europe and back courtesy of The Dutta Corp., so he has just begun to think about what other dreams could become a reality.

“For sure the long-term goal is getting to do five-star events [with Fritz],” he stated. “Kay and I have talked about how fun it would be to compete at [CHIO Aachen in Aachen, Germany]. We didn’t really think it would happen but now with this prize, we’d like to go to Aachen to compete in the four-star if it works out.”

With his name now etched onto the prestigious USET Foundation trophy alongside Olympians and some of the world’s best athletes such as David O’Connor, Bruce O. Davidson, Phillip Dutton, and Boyd Martin, Kreitl has a new aspiration beginning to take shape. “Riding for the [U.S. equestrian] team is a dream, and one I thought wouldn’t happen,” he commented modestly. “But now that we’re getting closer, I’ve had a couple of people encouraging me to go that path. Long story short, if it could be [a realistic] opportunity I’d go for it!”

Kreitl is quick to point out that his eventing journey is made possible by a tremendous team effort from his barn team and coaches. “Liz Carter has been helping me with the horses at home and has been grooming, and I definitely couldn’t do it without her,” he noted. “Julie Miller first introduced me to the sport of eventing, and she comes to different shows and grooms for me, so we’ve been on this journey together. My coaches have helped me dramatically, especially my eventing coach Sharon White and Bonna McCuiston who has been my dressage instructor for 12 years. In the past couple of years, I have also been working with Richard Rinehart for show jumping.”

In addition to his team at the barn, Kreitl spoke to an equally supportive team at home. “I’m married to a non-horse person who is going through stage 4 cancer treatments,” he shared. “My wife Alyssa is super supportive, especially with the trials she’s going through and [being home with our two young children]; it’s incredibly impressive. She’s really the heart and soul.

“Between running our own business, doing the horses as a hobby, and my wife with her health issues, we really could not do this without the help of our extended family,” he continued. “It’s been great that everyone is very excited [about the eventing] and wants to do it.”

Krietl is realistic about the highs and lows of the sport but is taking the time to enjoy his milestone achievement. “It’s been a really fun journey, a lot of days of hard work, and disappointments along the way and thinking [winning at the top level would] never happen. So, it’s sure fun when it all comes together, and to get a big win was totally awesome.”

His advice for other aspiring athletes? “I’d say 100% chase the dream,” he concluded. “You just don’t know [what can happen]. I had no idea when I met Kay that it was a dream of hers to own upper-level horses. Work really hard, and don’t give up on the dream. When I think things aren’t going to come together and I get discouraged, [I keep going and] after a while something good happens.”

2019 Erin Sylvester and Paddy the Caddy

2007 Phillip Dutton and The Foreman

2002 David O’Connor and Custom Made

2001 David O’Connor and The Native

1991 Derek diGrazia and Our Busby

1987 Kerry Millikin and The Pirate

1982 Kim Walnes and The Grey Goose

1970 Lee Thibodeau and Even Steven