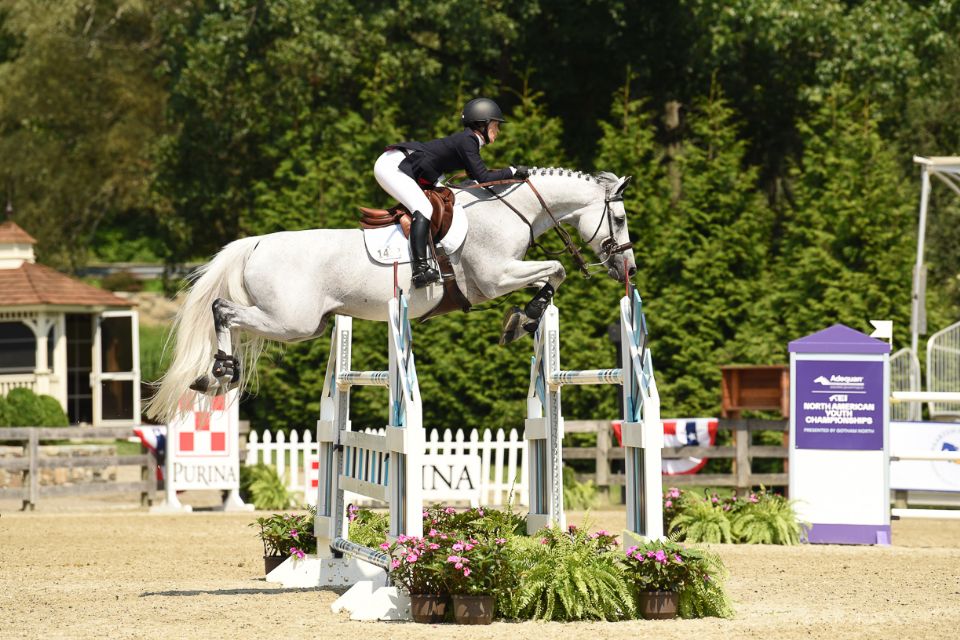 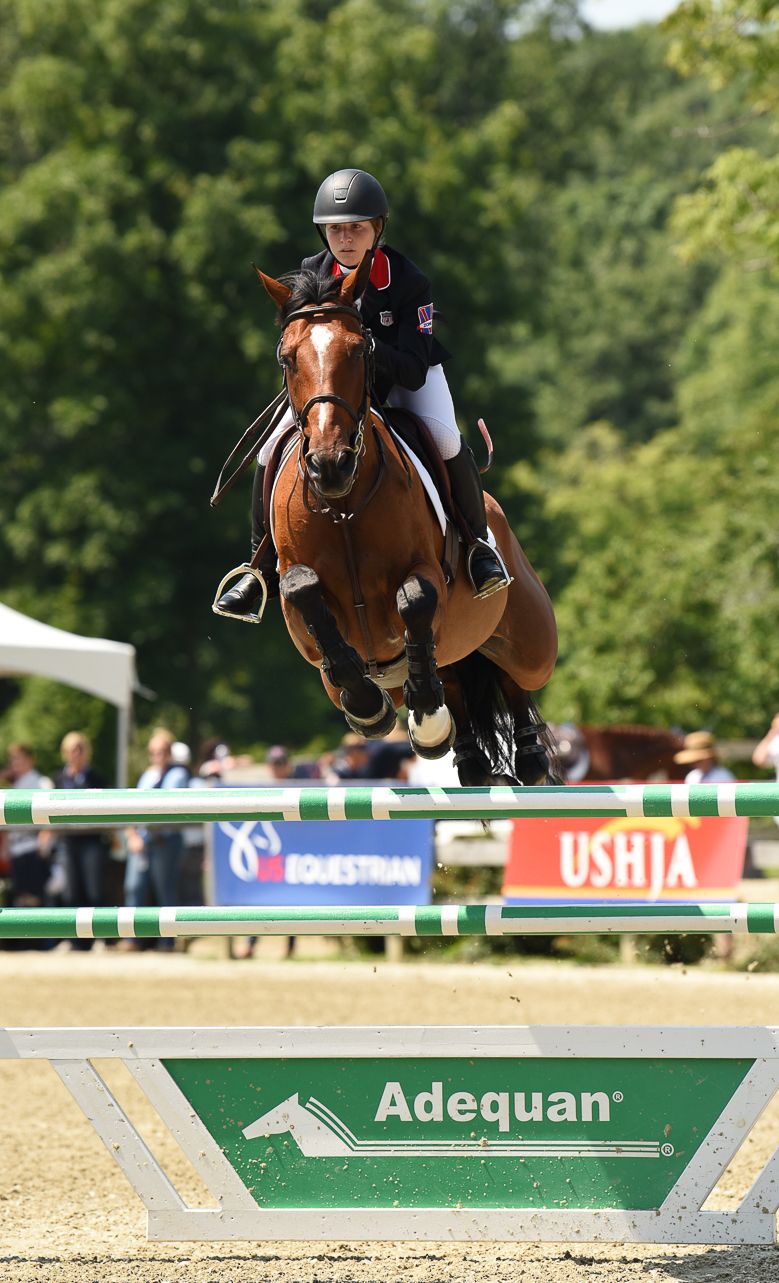 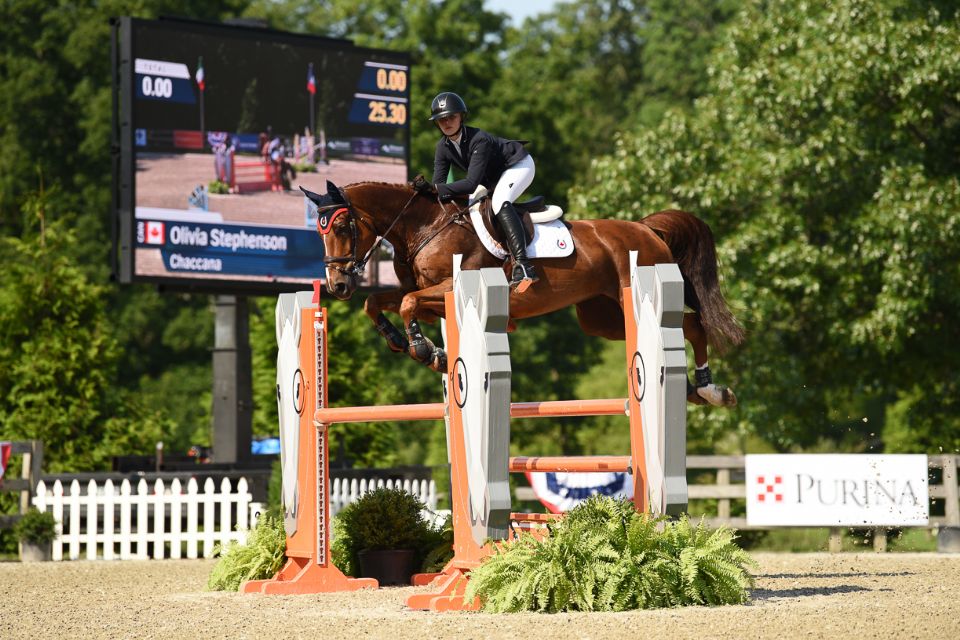 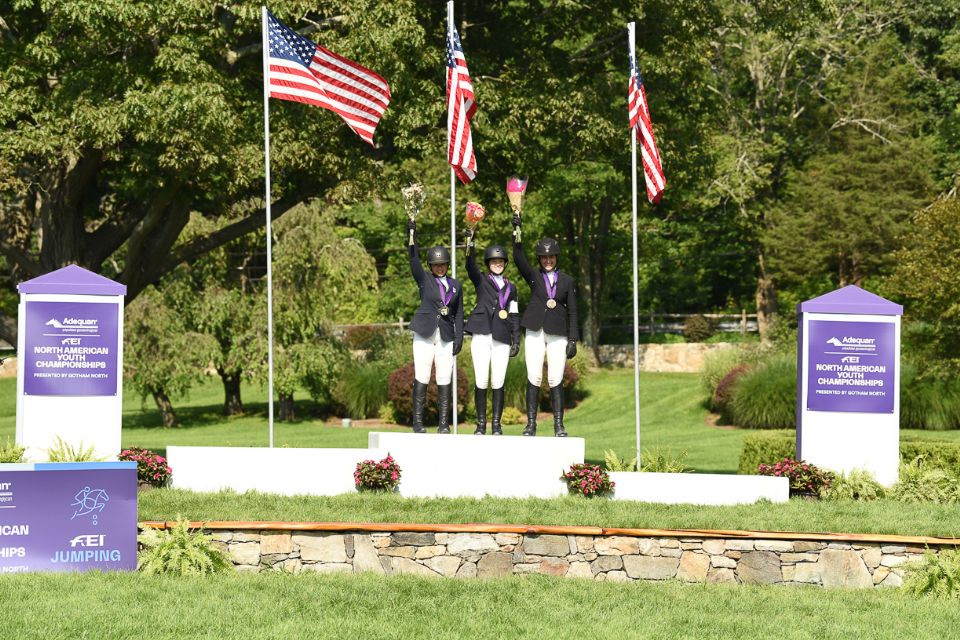 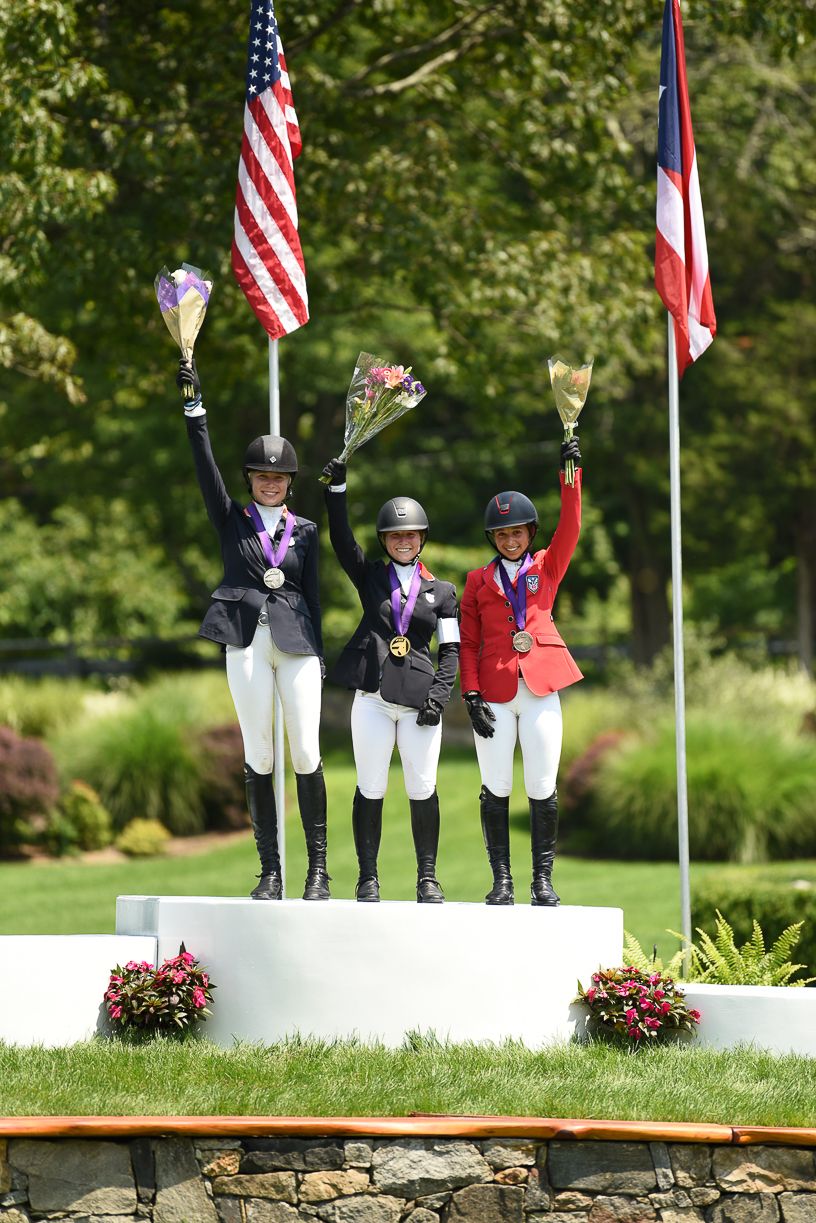 Daisy Farish didn’t have much room for error when she cantered back into the ring for the final round of the United States Hunter Jumper Association (USHJA) North American Young Rider Show Jumping Individual Championship. One rail, and she’d drop out of the medals. But Farish rose to the occasion, piloting Great White to their second faultless round of the day to claim individual gold in the finale of the Adequan®/FEI North American Youth Championships (NAYC) at Old Salem Farm in North Salem, NY, on August 5.

“I think having that pressure helped me a little bit, knowing that I had to get this done,” said Farish, 17 and from Lexington, Ky. “‘Bruce’ rose to the occasion.”

Samantha Cohen and Mckayla Langmeier had put the pressure on Farish with clear rounds of their own, but when she answered the call, they had to settle for silver and bronze.

“I’ve done the Hunterdon Cup, Junior Hunter Finals and Young Riders for several years and I hadn’t won any of them yet,” Farish said. “It’s my last junior year, so it’s a dream come true to add those three titles to my accomplishments. I think it’s a culmination of the team behind me, my horses, my friends, my trainers, and everyone at Heritage Farm. It just came together for me this week.”

Farish started off the week in the lead at NAYC after winning the Individual Qualifying speed round, but then four faults for a foot in the water while competing for Zone 5 during the Team Final put them into third in the individual standings before the two rounds of the Individual Final. “That almost gave me a little bit of ease, not coming back in on top today and having that pressure on myself,” she said. A clear round vaulted her right back into the lead before the final round, however. Farish knew she had to stick to her plan.

“He’s a super brave horse—the more I challenge him, the better he jumps,” Farish said of Great White, a 10-year-old Holsteiner gelding. “If I just canter around softly, he’s more likely to have one down than if I really ride him up to the jumps and challenge him. I think that’s good for me, because going into the last round today, I knew I could be conservative and have a time fault, but then I thought, ‘He’s going to jump better if I ride it like a real round,’ and he did.”

Farish has been riding Great White for 2½ years and has struggled with some rideability issues before discovering that he likes being ridden in a hackamore. “I think the biggest thing for me this week is seeing how far my horse has come,” she said. “He has surprised me in every way. I didn’t think we’d be here today and I definitely didn’t think we’d be winning gold. I’m so proud of him and so thankful to my trainers and everyone who helped him get here and helped me get here. I’m mostly just very proud of my horse.”

Farish also was awarded the United States Equestrian Team Foundation Maxine Beard Show Jumping Developing Rider Award, which includes a trip to an FEI Nations Cup competition. Farish will be able to observe what goes on in the stabling, veterinary inspections, schooling and show office as well as being able to walk the courses with U.S. team riders and the chef d’equipe.

Cohen, 17 and from New York City, N.Y., added the individual silver to the team gold she’d won with Zone 2 earlier in the week riding her Carmen, an 11-year-old KWPN mare. “Coming into today, I was in fifth and I just wanted to put in two of the best rounds that I could,” Cohen said. “My horse felt great. I had complete confidence in her and I thought she jumped amazing in the first round. In the second round, coming back in second, I knew there were a lot of clear rounds before and I couldn’t have a rail. So, there was some pressure coming in, but I know her so well and trust her so much that I felt confident.”

Langmeier, 18, worked her way up from eighth after the Individual Qualifying round to the individual lead headed into the last day, but a rail in the first round on Sunday dropped her down to the bronze medal riding Durosa W, a 10-year-old KWPN mare owned by Linda Langmeier. “My horse is a very hot chestnut mare, so in the speed [class] I didn’t really go that fast,” she said. “Then I was good in the team event and we were double-clear. Today, I had an unlucky rail out of the in-and-out and then she was super in the last round.”

All three individual medalists, by virtue of their NAYC placing, are qualified to compete on the U.S. Show Jumping Youth Team for the FEI Youth Nations Cup Final in Opglabbeek, Belgium on September 6-9.

In a special award presentation, the Ground Jury recognized Taylor St. Jacques with the Style of Riding Award.

Pielet Climbs Back To Gold In Juniors

Alexandra Pielet was the only rider able to keep all the rails up on the final day to take the gold medal of the USHJA North American Junior Show Jumping Individual Championship riding Helene VE. Earlier in the week, Pielet had helped the USHJA Zone 5 team take gold as well.

“To be here and to get two golds is something I can’t quite believe has happened,” said Pielet, 17. “It seems like it’s a dream. I wanted to just come and do my best and put in clean rounds, especially for my team. I didn’t want to let any of my team members down. Luckily, I didn’t and I was able to keep jumping clear and it means a lot to win a championship. All the work I did all year paid off.”

Elli Yeager, 15 and from Wellington, Fla., came into the Individual Final in the lead aboard her Waliba VDL, a 15-year-old KWPN mare, but had two rails in the final round to end up with the silver medal. Puerto Rican rider Claudia Villamil, 15, moved up from sixth place to the bronze in the Individual Final with her Quite Close vd Smis, an 11-year-old Zangersheide gelding.

Pielet’s week didn’t get off the smoothest of starts, as she had a miscommunication with Helene VE in the Individual Qualifying round the first day. “I was really going for it and I had a little drive-by at the last jump, but fortunately I was fast enough to place 11th [in that class]. Then jumping clean rounds helped me climb back up the standings. She really helped me by jumping her heart out,” Pielet said.

Helene VE, an 11-year-old Belgian Warmblood mare owned by Co-Pielet LLC, has been part of Pielet’s life for three years. “She started as my children’s jumper and she’s brought me all the way up to my first U25 classes in Florida,” Pielet said. “I never really had that high of expectations for her, but the bigger the jumps got, the more she just kept jumping her heart out and the more comfortable she was.”

Pielet and Helene VE competed in the junior division at last year’s NAYC, but finished without a medal. “So this is a huge accomplishment,” she said. “Getting a medal at a championship has been a dream of mine. It was just a dream come true to be able to go clear in all my rounds and have it pay off.”

Pielet lives in Highland Park, Ill., but rides with trainer Andre Dignelli in Katonah, N.Y., so she spends the summers in New York and then commutes back and forth on the weekends during the school year. She is planning to start at Auburn University in Alabama in the fall.

The gold medal came down to a three-way jump-off, with Stephenson and McLaughlin racing against one of the first riders from Guatemala to have jumped in the NAYC, Valentina Arenas Saravia. All three had jumped faultlessly over the five preceding rounds. Stephenson ended up with the fastest clean jump-off round to earn gold, while McLaughlin was just a fraction of a second slower for silver and Arenas Saravia had 8 faults for the bronze.

“It’s a dream come true; I never thought it would happen,” said Stephenson of the gold she won aboard Tomboy Farms’ Chaccana, an 11-year-old chestnut mare. “I just wanted to stay focused on what I knew I could do. I feel very honored to represent Canada. It’s been a dream of mine since I started the children’s jumpers. Teamwork makes the dream work! I think all the support from all our parents and supporters really made it fun for us.”

Stephenson, 12, has only been riding Chaccana since May, when she was a last-minute replacement mount for Stephenson to ride on the Canadian Children’s Nations Cup team at the Odlum Brown BC Open CSIO5* in Langley, British Columbia. Despite the short partnership, Stephenson, of Calgary, Alberta, and Chaccana jumped two clear rounds in Langley to help Canada take second place.

“We’ve been to a lot of horse shows since then and I’ve gotten to know her around the barn,” Stephenson said. “She’s a very sweet mare. Everyone says chestnut mares are hot and spicy and maybe opinionated, but that’s not her at all. I know she’s always got my back and she’s lovely to be around.”

McLaughlin, 14 and from Ottawa, Ontario, rode her own Bronan, a 10-year-old KWPN gelding, to the silver medal. Arenas Saravia, 14, traveled from Guatemala to ride Enrique Arenas’ Belina, a 12-year-old mare, to the bronze.