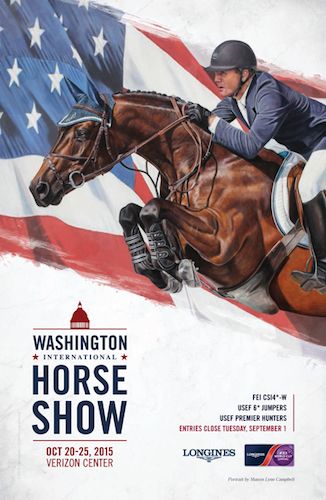 The highlight event of WIHS, the $125,000 President’s Cup Grand Prix, presented by Events DC, has been selected as one of seven events to comprise the East Coast division of the all-new Longines FEI World CupTM Jumping North American League.

“It is an incredible honor to have the President’s Cup Grand Prix as a leg in this elite international league,” said Victoria Lowell, WIHS President. “We look forward to welcoming Longines to our nation’s capital as the new title sponsor of this world cup qualifying event along with top horses and riders from the U.S. and abroad who compete for coveted points towards a spot in the World Cup Finals, and a chance to be presented with the President of the United States Perpetual Cup, commissioned and donated by First Lady Jacqueline Kennedy in 1961.”

“WIHS will also introduce all-new footing this year based on rider feedback and FEI request. We have enlisted an FEI footing specialist and will utilize a new limesand with fiber mix footing, similar to the footing used at the World Cup Finals in Las Vegas this year,” said David Distler, WIHS Show Manager. “We continue to examine areas where we can make improvements to the safety and quality of the show and provide the best possible experience for horses and riders.”

2015 WIHS Official Artist, Sharon Lynn Campbell, has created a dramatic portrait featuring McLain Ward and HH Carlos Z, winners of the 2014 President’s Cup Grand Prix. The art will appear on the prize list cover, social media and in advertising. Ward is a two-time U.S. Olympic gold medalist and is currently ranked #5 on the FEI/Longines World Ranking List. He has won the President’s Cup an incredible four times, first in 2004 with Goldika 559, twice with his superstar horse, Sapphire, in 2008 and 2010, and last year with Double H Farm’s HH Carlos Z.

“I have always enjoyed this event. I love it being downtown, and it has always been a very special week,” said Ward, a fan favorite at Washington. “It has always had a great audience for the grand prix and Puissance night traditionally. It is a logistically difficult horse show on many fronts, just like Madison Square Garden was in New York years before, but that is what makes it special. Having it in the heart of the city is what gives it the atmosphere and it is something that you cannot recreate in venues not downtown.”

This year’s prize money tops half a million dollars including several special cash bonuses to the leading hunter and jumper riders. WIHS will award $15,000 to the leading International Jumper rider, and a $10,000 bonus and the Juliet Weber Reid Trophy, sponsored by Sleepy P Ranch, will go to the leading rider 25 years of age or under.

A $5,000 cash bonus will be awarded to the hunter rider accumulating the most points in the professional hunter divisions.

In addition, the WIHS Young Jumper Championship Incentive Bonus Program, which encourages investment in developing young horses, will return with up to $20,000 at play, thanks to SHF Enterprises.

WIHS offers several sponsorship and hospitality packages including tables on our custom-built Ringside Dining Platforms and in the sky box-level Acela Club, as well as tickets to evening social events. Sponsorships are available at all levels with a wide range of benefits and amenities. For more information, call Nicky Meyer, WIHS Sponsorship Director, at 202-525-3679 or email nicky@wihs.org.

“We’re pleased to present a show like no other,” said Bridget Love Meehan, WIHS Executive Director. “We have more than 26,000 enthusiastic spectators, 500 of the best horses in the world, great dining, shopping and entertainment experiences and spectacular hospitality all in the heart of our nation’s capital city. We would like to thank our exhibitors and our sponsors and look forward to hosting everyone in 2015.”

About WIHS wihs.org
Established in 1958, the Washington International Horse Show is one of the oldest and most prestigious equestrian sporting events in the U.S. More than 26,000 spectators attend the six-day show, which includes Olympic-level competition along with community and charity events. More than 500 top horses and riders come to D.C. from all over the globe to jump for more than a half a million dollars in prize money. Event highlights include $125,000 Longines FEI World CupTM Jumping Washington, the President’s Cup Grand Prix, presented by Events DC, (Saturday night), The Boeing Company Puissance high jump competition on Military Night (Friday) and Kids’ Day (Saturday), a free, fun and educational community event. The Washington International Horse Show Association, Ltd. is a 501(c)(3) nonprofit charitable organization headquartered in Washington, D.C. WIHS is an official USEF Heritage Competition and is recognized as a Top 25 Horse Show by the North American Riders Group. WIHS is rated CSI4*-W by the Fédération Equestre Internationale, the world governing body for horse sports.