Equestrians Can Learn from “Railroader: The Unfiltered Genius and Controversy of Four-Time CEO Hunter Harrison” 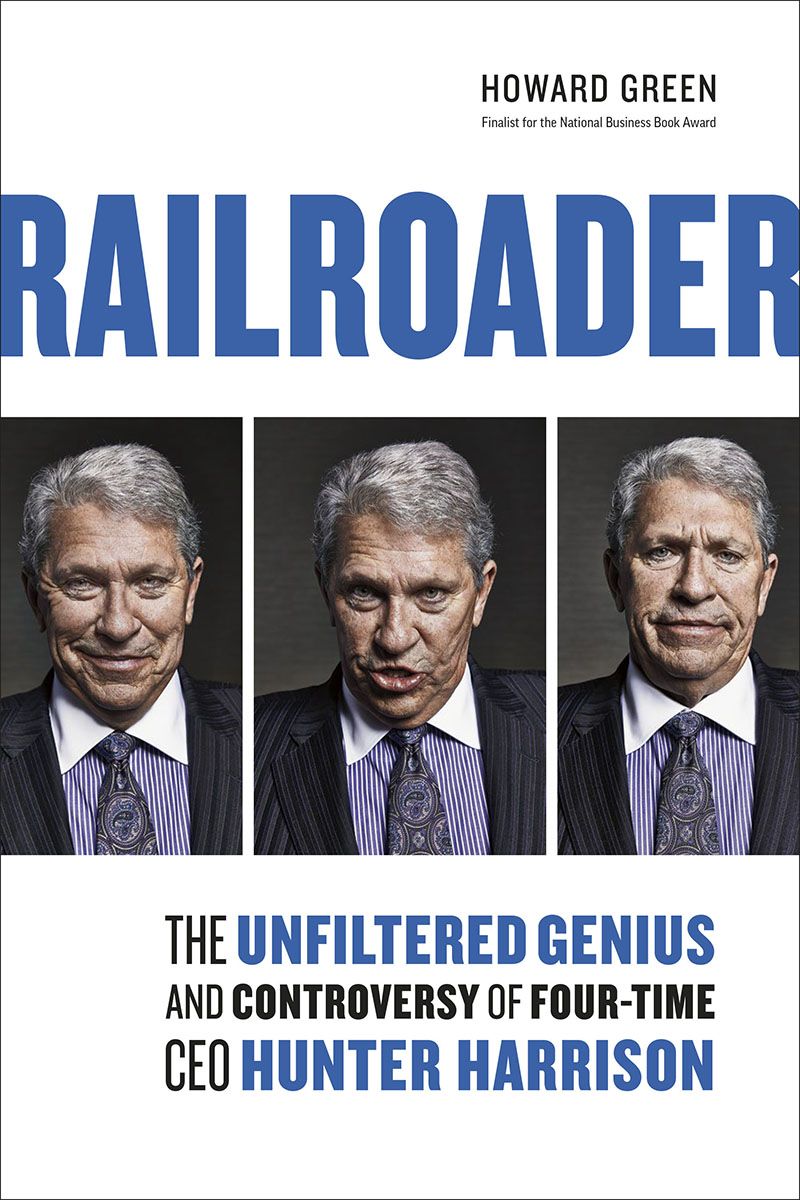 "Railroader" is an insightful look into the life of show jumping owner and sponsor Hunter Harrison. 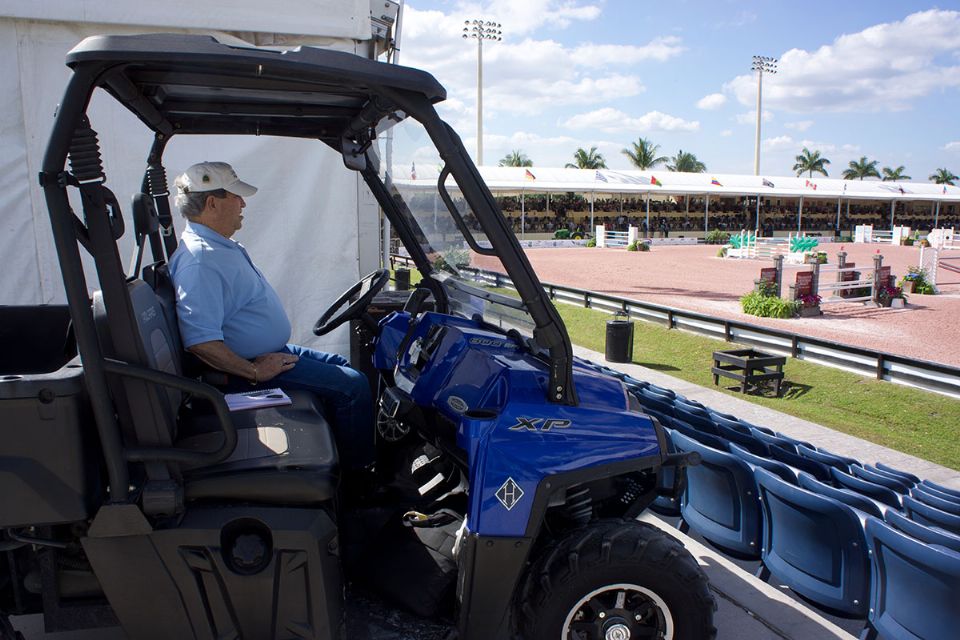 Hunter Harrison watching one of his horses jump at the Winter Equestrian Festival. ﻿
Photo courtesy of Howard Green

Show jumping fans know Hunter Harrison of Double H Farm as the owner of superstar horses with the HH prefix, like 2017 Longines FEI Jumping World Cup® Jumping Final winner HH Azur, and as the force behind the extensive corporate sponsorship of CN and CP in the horse show world. But there’s so much more to Harrison, as detailed in the engaging biography “Railroader: The Unfiltered Genius and Controversy of Four-Time CEO Hunter Harrison.” Harrison will be posthumously awarded one of the US Equestrian’s 2018 Richard E. McDevitt Awards of Merit at the Pegasus Awards Ceremony on January 10 during the 2019 US Equestrian Annual Meeting.

“‘Railroader’ is the definitive story of the life and career of Hunter Harrison,” said two-time Olympic gold medalist McLain Ward, who has ridden for Double H Farm for years. “Not only does it give unique insight into who he was as a CEO and as a railroader, but it also gives a view of who Hunter was as a man. Many aspects of my life have been heavily influenced by this special and truly one-of-a-kind man. To know him was a privilege, to work for him a challenge, to impress him an honor, and to have him by your side a comfort. There are not many men left in the world like Hunter Harrison.”

“Railroader” paints an intimate portrait of Harrison not only as a businessman, but also as a devoted husband, father, and grandfather. Harrison’s involvement in the horse world appears briefly in the book, but the story of Harrison’s rise from railyard worker to Chief Executive Officer offers lessons in how attention to detail, leadership, and bold decision-making can lead to success in any endeavor.

Harrison, who passed away in December 2017, was known for not only his brusque style but also his kind and generous mentorship. Riders who rode for Double H Farm spoke not only of Harrison’s support of their riding, but also of his wise counsel in professional matters. Harrison was introduced to the horse world when his daughter, Cayce, began riding, but quickly became a force to be reckoned with in show jumping through his horse ownership and event sponsorship.

“I think the essential point of the book is that Hunter, when he got involved in anything, did it in the best possible way he could,” said the book’s author, Howard Green. “He was really about excellence in whatever he did, whether it was railroading or golf or show jumping.”

Harrison’s work ethic in the railroading world was legendary. He was never not working, Green makes clear. But Green also notes Harrison’s dedication to his farm, horses, and riders. During one of their interviews for the book, Harrison cut their conversation short to drive them from Double H Farm’s Wellington, FL, farm to the Winter Equestrian Festival showgrounds to watch his son-in-law, Quentin Judge, show a horse.

Green believes that reading about Harrison’s life can be instructive and inspiring for anyone, not just businessmen or those in the railroad world. In fact, he points to Harrison’s own reading habits as evidence of how learning about great leaders in other parts of life can help shape your own success.

“I’ve interviewed a lot of CEOs in my life, and a lot of them are great history buffs. They read about great leaders like Winston Churchill or Teddy Roosevelt,” Green said. “Their libraries are full of those kinds of books. If you looked at the shelves of Hunter’s office, the books were about great sports coaches like Vince Lombardi or Bear Bryant. These were coaches who were very tough, but highly respected. Hunter drew a lot of leadership lessons from reading about those types of people. In the book, McLain Ward talks about how demanding Hunter was, that he expected great things from people. And it seemed that people who wanted to do great things gravitated towards Hunter because he was one of those people who could make you reach for the stars.”

“Railroader” has been received with great acclaim in the business world.

"This book energized me to approach business and life just a little more like Hunter Harrison… Howard Green masterfully puts you up close and personal with a man who's both utterly straightforward yet complicated, all while giving a great perspective on what was happening in business at the time… This is one of the best books I've ever read."
Nicole Verkindt, founder and CEO, OMX

" ‘Railroader’ presents both a fascinating business story with global resonance and a very personal tale of a life fully lived in a 'no-holds barred' fashion to the very end. It is a brilliant profile of an enigmatic, somewhat obsessed, railroad mercenary, who turned his industry on its head, with new benchmarks for future generations of leaders. Lots of juicy learnings throughout."
Calin Rovinescu, president & CEO, Air Canada

Review copies of “Railroader: The Unfiltered Genius and Controversy of Four-Time CEO Hunter Harrison” are available upon request and the book is available for purchase at Amazon.

“Railroader: The Unfiltered Genius and Controversy of Four-Time CEO Hunter Harrison” is an unflinching biography of the railroad CEO Hunter Harrison, who also made a lasting impact on the world of show jumping through his ownership of top horses at his Double H Farm and by bringing corporate sponsorship from CN and CP to multiple venues such as the venerated Spruce Meadows and the Winter Equestrian Festival. The author, Howard Green, was a broadcast journalist for 33 years and is best known as founding anchor at Canada's Business News Network. During his almost 15 years at BNN, he conducted more than 14,000 interviews, many with leading CEOs and the biggest names in business and politics, including Sir Richard Branson, Federal Reserve chairman Alan Greenspan, and former British prime minister Tony Blair. Green is a two-time Emmy nominee and winner of Canada's top television prize for his documentary work, and his films have been broadcast worldwide. In 2013, Green became a bestselling author with the release of his first book, Banking on America: How TD Bank Rose to the Top and Took on the USA. Howard Green lives in Toronto.