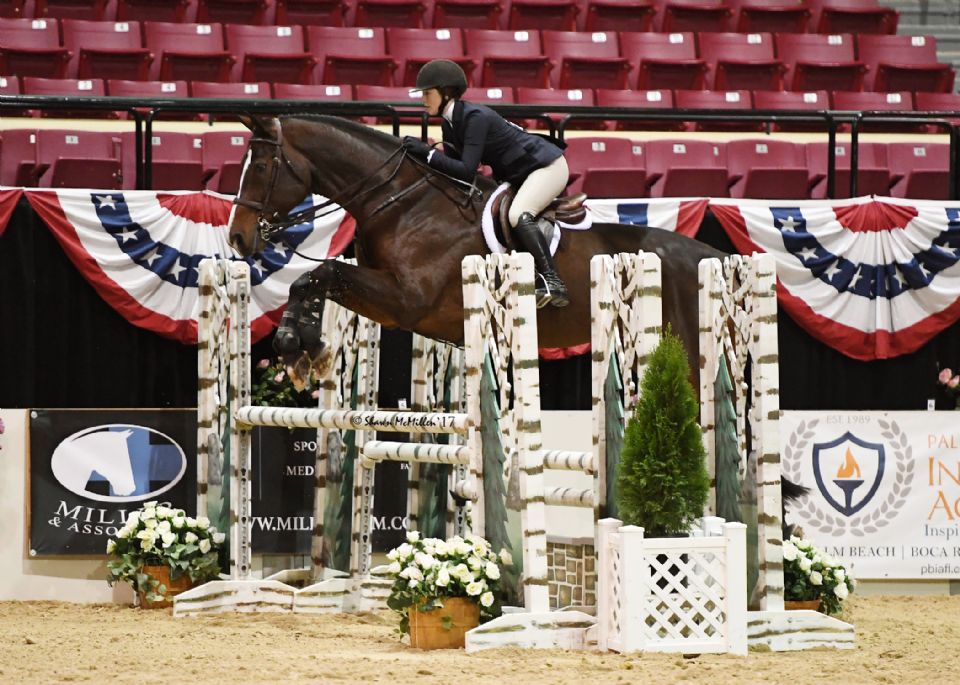 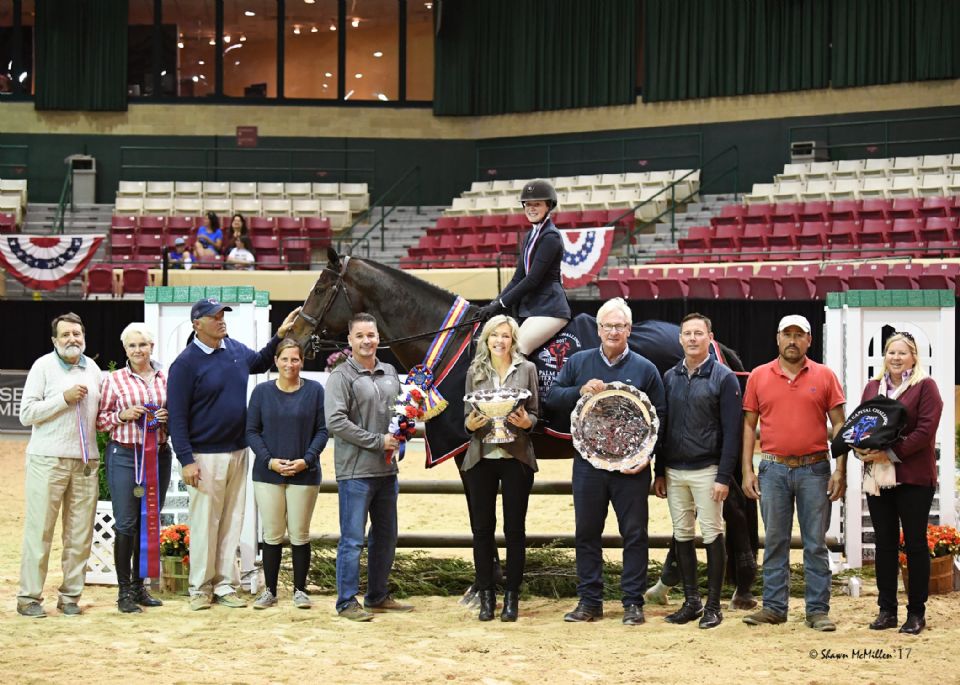 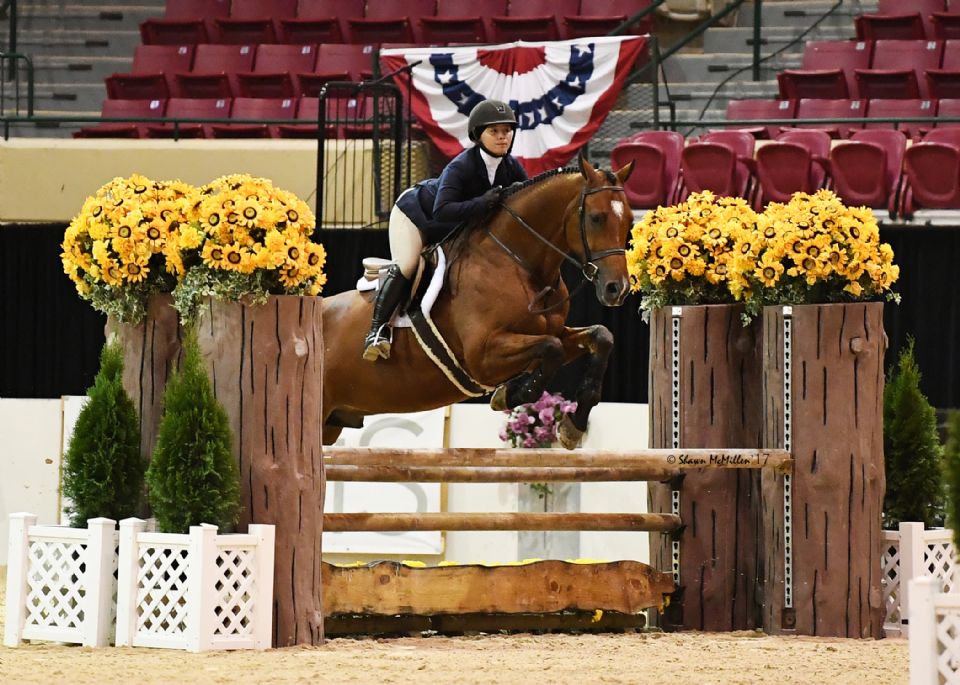 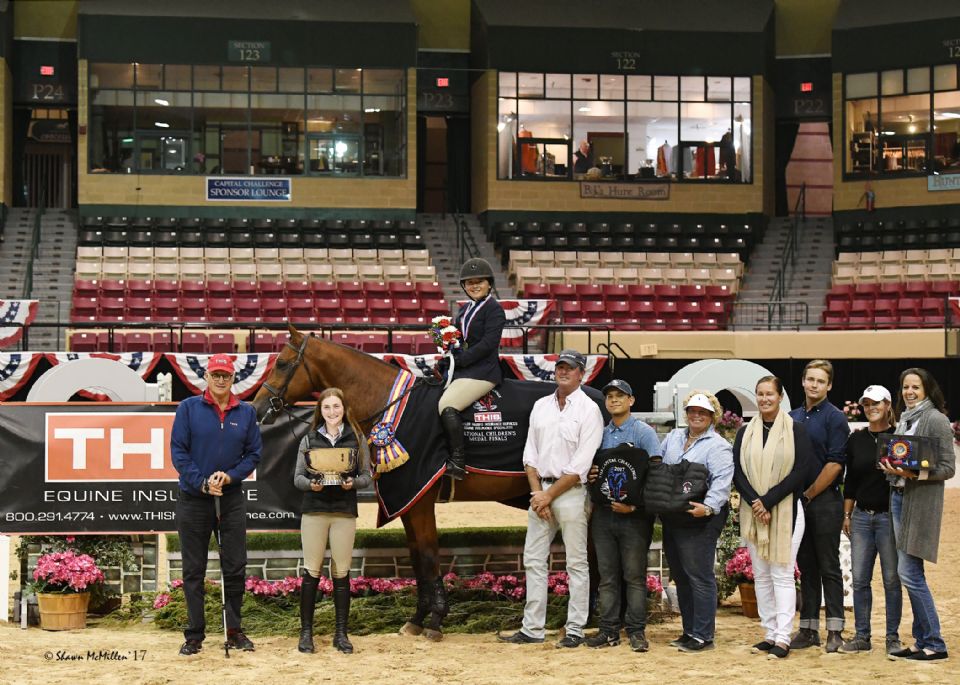 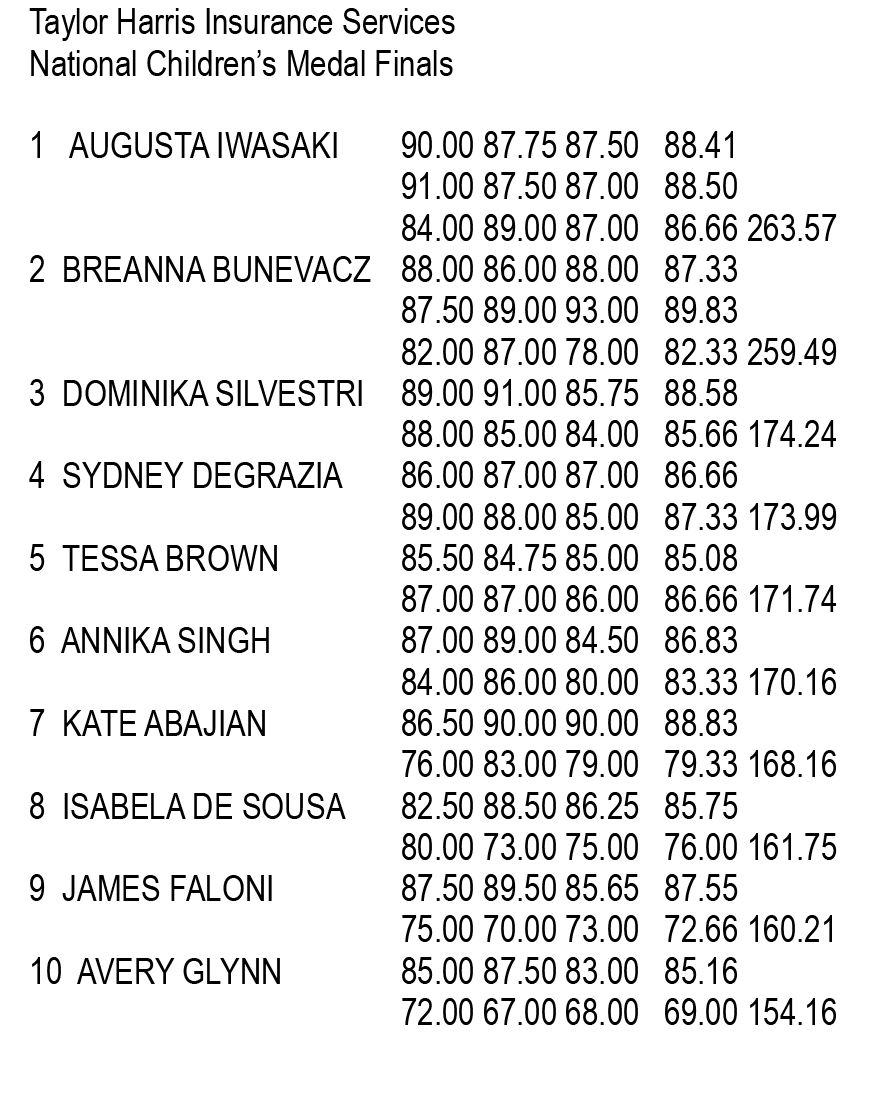 The final results of the THIS National Children's Medal Finals. 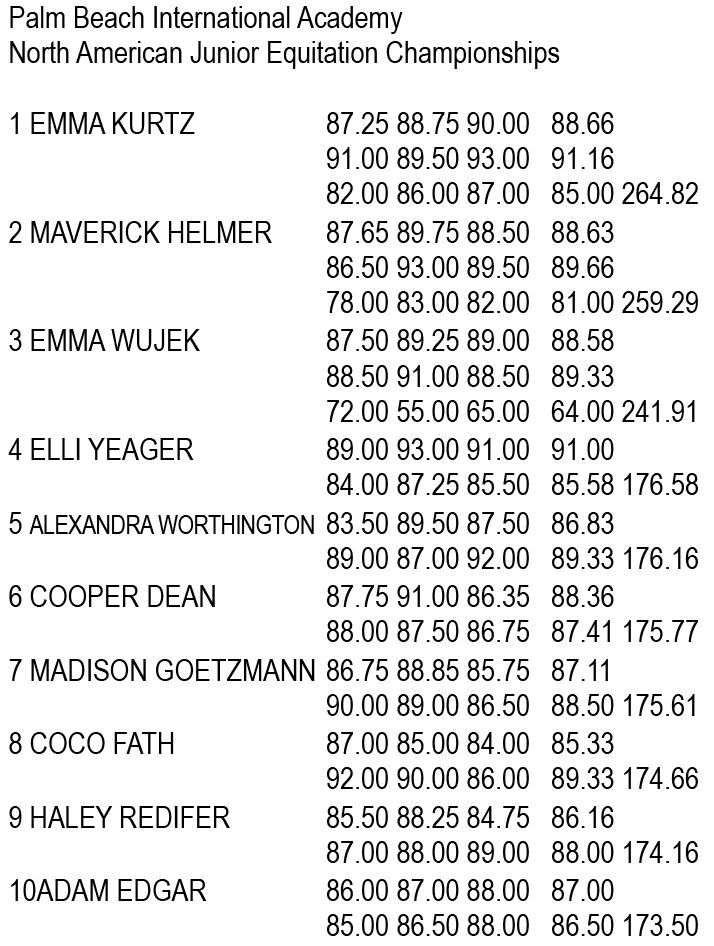 Kurtz was one of 110 talented junior riders from throughout the U.S. who contested the PBIA North American Junior Equitation Championships first round course set by Kenneth Krome.

Following the conclusion of the first round of competition, the field was narrowed to the top 20 riders, as determined by the six-person judging panel that included Linda Andrisani, Chance Arkelian, Brian Lenehan, Bobbie Reber, Danny Robertshaw, and Steve Wall.

Heading into the second round, Elli Yeager of Westlake Village, CA, held the lead with a score of 91, while Kurtz sat in second place with a score of 88.66. Saturday night’s winner of the United States Hunter Jumper Association (USHJA) 3’3” Jumping Seat Medal Finals – East, Maverick Helmer, sat in third on a score of 88.63, and Emma Wujek of Grosse Pointe Farms, MI, rounded out the top four on an 88.58 score.

Riders returned in reverse order of their standings for the second course, and a second-round score of 91.16 – for a two-round total of 179.82 – quickly shot Kurtz to the top of the leaderboard. For Yeager, a score of 85.58 for a two-round 176.58 total moved her from the lead to the eventual tenth place finish.

With Helmer and Wujek close behind Kurtz at the end of the second round, with scores of 178.29 and 177.91, respectively, the judges asked the top three back for additional testing. The test asked riders to go directly from the in-gate to a triple bar and featured a trot jump, a highly difficult angled line, and a counter-canter to the final oxer.

Wujek of Grosse Pointe Farms, MI, was the first to return and finished the test with a score of 64; Helmer of Roanoke, VA, earned an 81, and it was Kurtz who turned in the top score of 85 to cement her place at the top, leaving Helmer in second and Wujek in third.

“It was a very difficult test, so I just wanted to go in and play it safe and have as nice a round as I could. It all worked out,” said Kurtz, who trains with Amanda Lyerly, Mike Rheinheimer, Scott Stewart, and Ken Berkley. “In my first round, I went in and just had a solid round like I was planning. Then in the second round, I picked it up a little more and took some more risks, and I thought it was more impressive to watch.”

Kurtz earned the victory aboard Carl, an 11-year-old Warmblood gelding leased by Dr. Betsee Parker, that lives at home with Kurtz and her family.

“I get to ride him every day, and I know him really well at this point,” Kurtz said. “He’s such a good horse. He tries so hard. He’s a perfectionist for sure. If he ever screws up, he gets really nervous, and you have to tell him he’s perfect. That’s probably the trickiest part about him. If he ever makes a mistake, you just have to pet him and tell him he’s perfect. You can never really reprimand him.”

Kurtz and Carl will next contest the Dover Saddlery/USEF Hunter Seat Medal Final in Harrisburg, PA, but Kurtz is quite happy to have gotten her first equitation championship victory under her belt at Capital Challenge.

“I’m very happy; I love it here because it’s a good set-up for the rest of indoors,” Kurtz said. “You get to have one day inside and one day outside; the horses can kind of ease into the indoors feeling.”

As part of the victory, Kurtz and her trainers Lyerly, Rheinheimer, and Stewart, were presented with the George H. Morris Equitation Championships Trophy, donated by Frank Madden and Stacia Madden. Kurtz also received the Best Equitation Rider Award, sponsored by Karen Healey and Amanda Hood, and Lyerly, Rheinheimer, and Stewart were given the Leading Equitation Trainer Award, sponsored by Leslie Steele, Acres West, and Amanda Hood.

The EMO Equitation Trip of the Show award, sponsored by EMO Insurance Services and presented to the rider with the highest scoring round on Saturday, went to Paige Matthies of Lake Leelanau, MI, who earned a score of 91.5 while competing in the 15-Year-Old Equitation division.

The win in Sunday’s THIS National Children’s Medal Finals was presented to Augusta Iwasaki of Calabasas, CA, riding Vanderpump, owned by Ashland Farms.

The top ten riders were then called back for a second round of jumping, and with a second-round score of 88.50 for a cumulative 176.91 total, Iwasaki moved in the ranks to second place, while Breanna Bunevacz took over lead with a second round average of 89.83 and overall score of 177.16.

With Bunevacz and Iwasaki separated by less than a point, the judges invited both riders back to the ring for a third and final round of testing, before ultimately awarding Iwasaki the championship honor.

Iwasaki, 13, is in her very first year competing in the equitation division, but the young rider has already earned major victories, including the USHJA Hunterdon Cup Equitation Classic – West.

“I was just really excited to be able to compete in such an amazing class,” said Iwasaki. “I think everyone works all year to compete here, and it’s very competitive.

“I loved doing the test,” Iwasaki continued. “I liked being able to do all of the inside turns. I do a lot of handy courses with my hunters, so I practice super inside turns a lot and I was able to use what I had already known.”

With Iwasaki taking the win, Bunevacz of Valencia, CA, finished in second and Silvestri of Andover, MA, took third.

While Sunday marked the conclusion of Equitation Weekend, presented by Bigeq.com, competition at the Capital Challenge Horse Show continues on Monday with the professional hunter divisions beginning at 7:30 a.m.