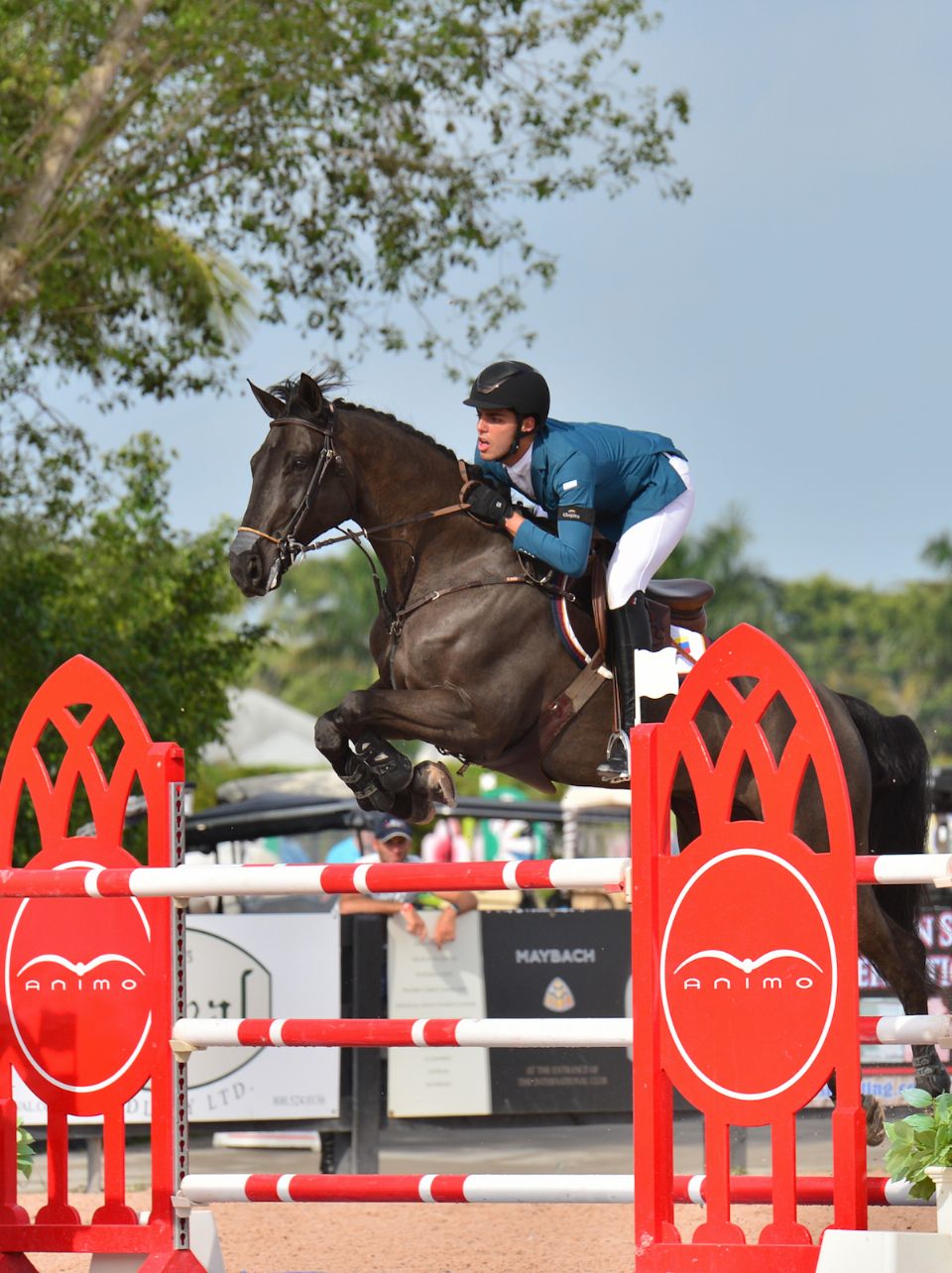 Emanuel Andrade and Walter 61 on their way to victory and the overall championship title in the $15,000 Maybach – Icons of Luxury High Amateur-Owner Classic on March 5 at the Winter Equestrian Festival in Wellington, FL.
Photo by Mancini Photos 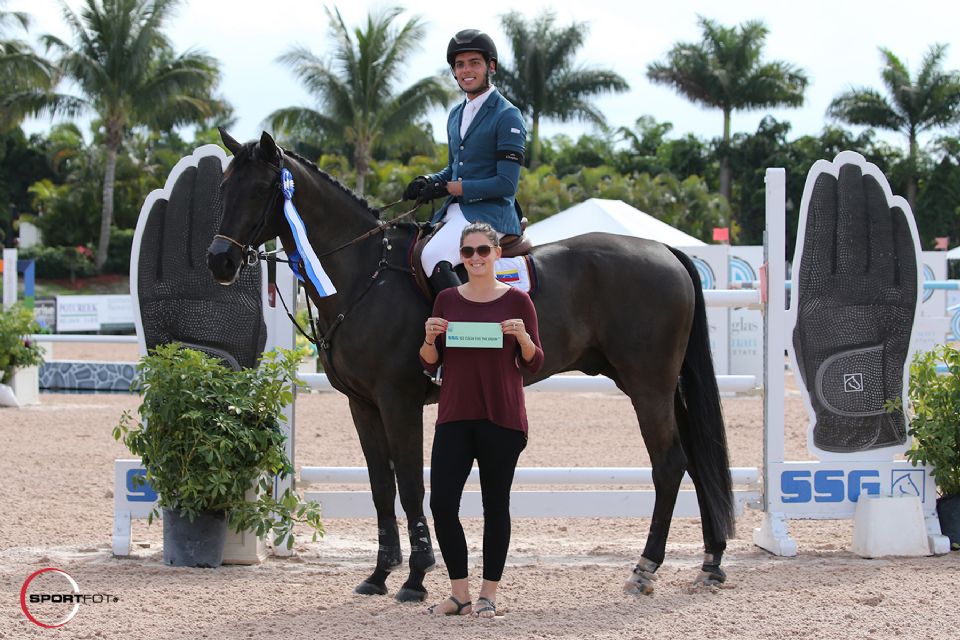 SSG Gloves “Go Clean for the Green” promotion representative Lindsay Brock presents Emanuel Andrade with a $1,000 bonus for wearing SSG ‘Digital’ riding gloves on his way to victory in the $15,000 High Amateur-Owner Classic.
Photo by Sportfot 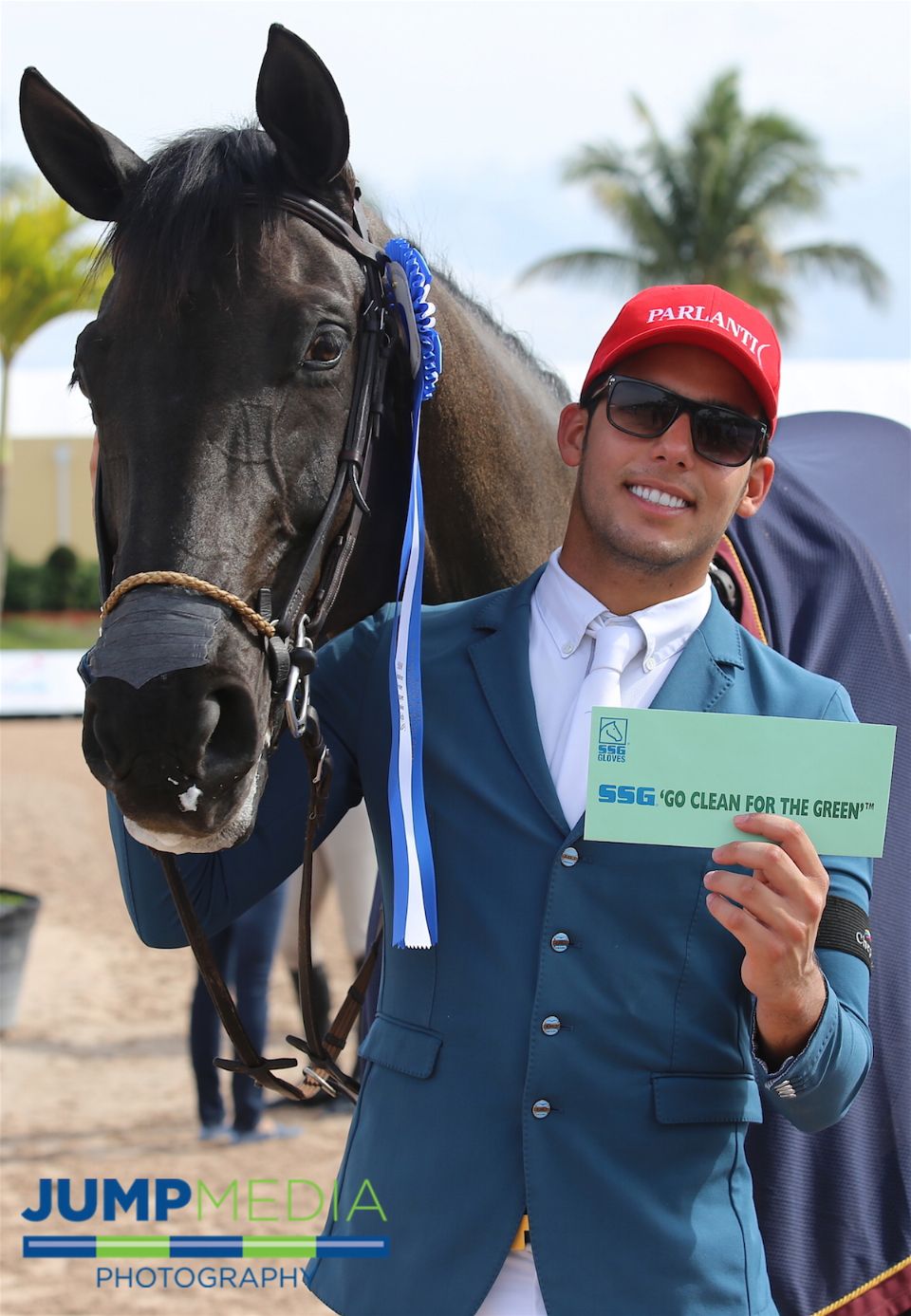 Emanuel Andrade of Venezuela, pictured with Walter 61, displays his $1,000 SSG Gloves bonus, which the 19-year-old rider gives to his grooms at Hollow Creek Farm in recognition of their hard work.
Photo by Jump Media

Venezuela’s Emanuel Andrade won the $15,000 High Amateur-Owner Classic on Saturday, March 5, and picked up a $1,000 bonus from SSG Gloves along the way in the SSG Gloves “Go Clean for the Green” promotion running throughout the 12-week Winter Equestrian Festival (WEF) in Wellington, FL.

A total of 44 horse-rider combinations contested the tracks set by Ireland's Alan Wade in the $15,000 Maybach – Icons of Luxury High Amateur-Owner Classic, with eight advancing to a jump-off.  Riding Walter 61, Andrade returned midway through the jump-off and posted the fastest double-clear effort by more than two full seconds, stopping the clock in 35.09 for the win over Brazil’s Karina Johannpeter, who was clear in 37.12 riding Vanilla di Villagana.  As Andrade was wearing SSG ‘Digital’ style riding gloves on his way to victory, he was awarded a $1,000 bonus for his loyalty to the Canadian brand.

“It's great for the riders to be able to wear nice gloves and win extra prize money,” said Andrade after collecting his second SSG Gloves bonus so far this season.

For Andrade, the SSG Gloves “Go Clean for the Green” promotion represents a perfect opportunity to give back to his Hollow Creek Farm team.  Each time he collects a bonus check, he gifts the money to his grooms in recognition of their hard work.

“I love this promotion,” said Andrade, 19, who also placed ninth in the Classic riding Belita.  “This is one of the most exciting classes for my grooms because I always give them the money.  They are very happy today!”

“Walter has been with me a long time and I know him very well,” said Andrade of his old friend.  “He's a trier and he still wants to win.  He is great for this level.  Today was pretty big and difficult, and I'm very proud of him.”

It was a great result for Andrade on a day that Hollow Creek Farm welcomes the world to Wellington, FL, for the annual Children, Junior and Young Rider Nations’ Cup competitions.  Held throughout the day on Saturday, March 5, the Nations’ Cup events gives many up-and-coming riders their first taste of competing at the international level in a team environment.