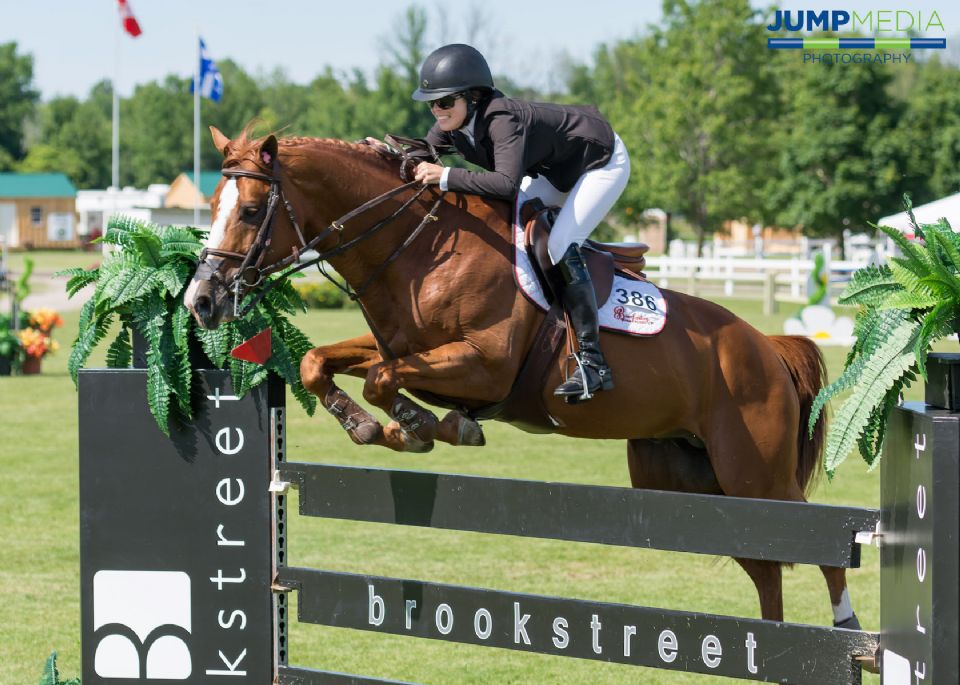 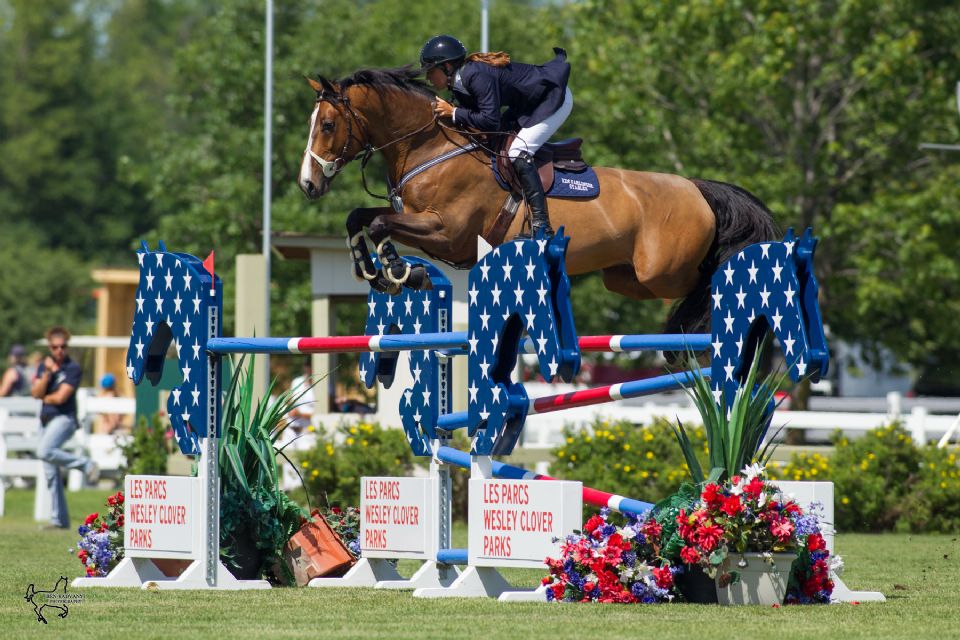 Kim Farlinger of Orangeville, ON, and Caprice vd Brouwershoeve on their way to second place in the $35,000 Brookstreet Grand Prix at the Ottawa International.
Photo by Ben Radvanyi Photography. 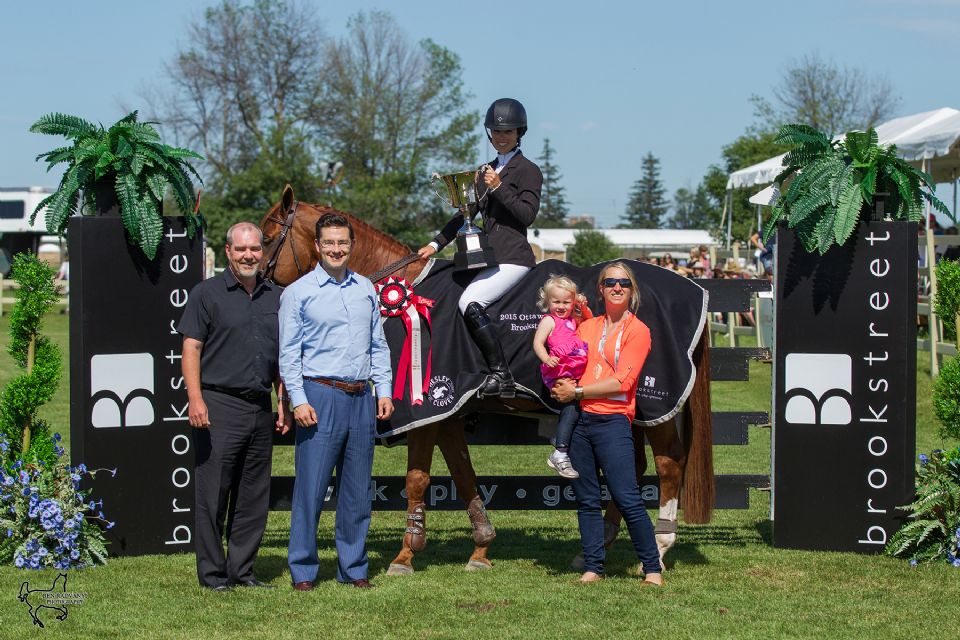 The Honorable Pierre Poilievre, National Capital Commission (NCC) Minister and Minister of Employment and Social Development, Mark Nisbett of Brookstreet Hotel, and Karen Sparks of Wesley Clover Parks and her daughter Summer, present Elizabeth Bates and Wildfire as the winners of the $35,000 Brookstreet Grand Prix at the Ottawa International.
Photo by Ben Radvanyi Photography.

Elizabeth Bates of Toronto, ON, claimed her first grand prix victory, winning the $35,000 Brookstreet Grand Prix on Saturday, June 20, at the inaugural Ottawa International Horse Show running June 17 to 21 at Wesley Clover Parks in Ottawa, ON.

The grandstands were full for the Ottawa International’s marquee event, proudly sponsored by Brookstreet Hotel, while many others tuned in to watch the free live webcast. Spectators were treated to incredible sport, as six of the original 26-horse starting field jumped clear over the course designed by Guilherme Jorge of Brazil to advance to the jump-off. Only two riders were able to once again leave all the jumps intact, with Bates’ time of 42.86 seconds giving her the win over Kim Farlinger of Orangeville, ON, who stopped the clock in 43.41 seconds riding Caprice vd Brouwershoeve.

The win in the $35,000 Brookstreet Grand Prix came two days after Bates and her small but mighty chestnut stallion, Wildfire, placed second in the $10,000 Karson Open Welcome on Thursday.

“I've been second a lot and never won, and it’s his first win, too, so this is nice for both of us,” said Bates, 26, who picked up the winner’s purse of $10,500. “We've been going through some stages of normal young horse rideability, but something has clicked in the past couple of months. He's been so responsive in the ring and we are really together.”

Now eight, Wildfire was purchased by Bates as a yearling.

“He was in a field, basically wild, and had never been touched,” said Bates of the Canadian-bred stallion that stands less than 16hh. “He's little and is the sweetest stallion you'll ever meet, but has a big heart and a lot of personality. It has been nothing but baby steps up for us. I know he's got everything it takes to be a top horse, but I like to take my time with my horses.”

Wildfire is sired by Quidam de Revel and his mother is Jade, a horse that Bates' trainer and four-time Canadian Show Jumping Champion Yann Candele piloted at the grand prix level several years ago. Candele, who is competing at Spruce Meadows in Calgary, AB, in preparation for next month’s Pan American Games, made the trip east to coach Bates in the $35,000 Brookstreet Grand Prix.

“If it didn't go well, I was going to tell Yann that he's not allowed to come anymore and I'm just going to show him videos,” laughed Bates. “I called him on Thursday before the jump-off in the $10,000 Open Welcome and he told me to go for a nice, efficient, double clear and we were second. He was a good luck charm then and again today.”

The only other double clear performance in the $35,000 Brookstreet Grand Prix belonged to Farlinger and her 12 -year-old Westphalian mare, Caprice vd Brouwershoeve.

“It was a great class and a tough course, but my horse was fantastic,” said Farlinger of her mount for the past six years. “The course designer, Guilherme, is known for being tough and the oxer-oxer combination off the gate posed a scope and bravery test, but my horse doesn't often let me down and she was no different today.”

Both Bates and Farlinger showed at previous events held at the venue before it was taken over by Wesley Clover Parks and were impressed with the recent changes. Both riders are planning to be back at the Ottawa International next year.

“I was surprised at the level of competition we saw this week since it was the first show here in many years,” said Farlinger. “It's a strong starting point and only says good things about the future.”

Darrin Dlin of Calgary, AB, had three entries in the $35,000 Brookstreet Grand Prix for owner Susan Grange. With Tennyson, Dlin had Bates' time beat, but the pair had a rail down to finish third in 41.31 seconds. He also placed sixth riding Ridley with four faults in the jump-off.

Melissandre Lincourt of Outremont, QC and Just Stella L, owned by Gabrielle Pelchat, took fourth after incurring four faults in the jump-off in a time of 42.48 seconds while Billie Derouet of Bromont, QC, and her own Bonaparte VP Wisbecq rounded out the top five with four faults in 46.79 seconds.

The Honorable Pierre Poilievre, National Capital Commission (NCC) Minister and Minister of Employment and Social Development was joined by Mark Nisbett of Brookstreet Hotel to present the awards to the top 12 finishers.

To conclude the inaugural Ottawa International Horse Show at Wesley Clover Parks, the $10,000 Canadian Hunter Derby will welcome hunter competitors to the grass Grand Prix Field on Sunday. A live webcast of Sunday's events is available for horse-sport fans by clicking here.