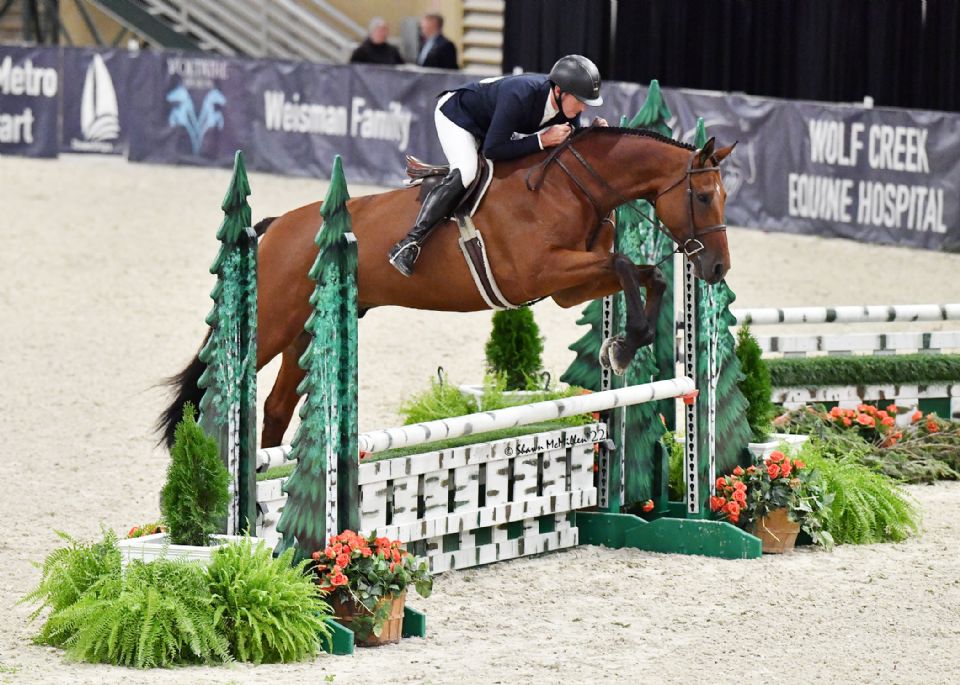 Duke of Argyll and Hunt Tosh scored 87.41 in the first round of the $25,000 KASK/Vogel Green Hunter 3’ and 3’3” North American Championship to earn the award and reserve champion honors at the 2022 Capital Challenge Horse Show.
Photo by Shawn McMillen Photography

Betsee Parker of Middleburg, Virginia, is no stranger to the hunter ring winner’s circle as an owner and breeder of top horses, but having a horse earn the 2022 Connaway & Associates Equine Insurance Services, Inc. High Point American-Bred Horse Award at the Capital Challenge Horse Show (CCHS) marked a first for her. Duke of Argyll, a five-year-old Belgian Warmblood gelding bred and owned by Parker and registered BWP/NA, scored an 87.41 in the first round of the $25,000 KASK/Vogel Green Hunter 3’ and 3’3” North American Championship with Hunt Tosh in the irons to capture the award and reserve champion honors.

“It’s a thrill to have a horse win this award because it speaks loudly about the importance of Americans retaining the ability to breed top-tier high performance horses for this country,” stated Parker.

“I am honored to sponsor the High Point American-Bred Horse Award for the fourth year at Capital Challenge,” said Connaway & Associates President Laura Connaway of Little Rock, Arkansas. “Congratulations to Duke of Argyll and Hunt Tosh as well as to Betsee Parker and her team, all of whom are dedicated to the careful breeding and development of top hunter horses in the U.S. As the breeder of my mounts, I appreciate the time and commitment it takes to produce successful horses and I hope our community will continue to acknowledge North American homebreds and the efforts of the people that have played a role in their successes.”

Duke of Argyll is sired by Lordanos and out of Everlychin de la Pomme, a mare owned by Parker that had an illustrious career initially in the 1.50-meter jumpers with Olympian Shane Sweetnam and later as a high performance hunter with Scott Stewart, winning the championship at the 2013 CCHS.

“The breeding of Everlychin de la Pomme was done in Virginia and was planned by me and my fantastic barn manager, Faith Fort,” explained Parker. “She and I decided to start harvesting the mare’s eggs because — from my background in breeding — I thought she was the most spectacular mare I had ever owned.

“I realized you never know what you’re going to get when you breed; it’s a roll of the dice,” continued Parker. “All you can do is breed for potential. That’s what we did and, much to our delight, Duke of Argyll has had a sensational year. I have to give special kudos to Faith [Fort] because she spent his early years taking wonderful care of him and making sure that he was mannerly and well behaved on the ground.”

In addition to playing a role in Duke of Argyll’s breeding and upbringing, Fort was instrumental in pairing the young gelding with Tosh. According to Parker, Fort felt the top hunter rider would be a good fit because of his gentle and soft way with horses.

“He’s very brave, has a balanced canter, a huge stride, and is very scopey,” Tosh, who is based in Milton, Georgia, said of the horse. “With the cold, rainy days we had this week, it was a lot for the young horses, but he was very straight forward. It’s always a test to go indoors but he went in and had two great trips. It’s nice to have a horse that can walk into a class like that and not have to worry about them being overwhelmed or nervous.”

Tosh, who is familiar with Duke of Argyll’s dam, has also enjoyed seeing the young horse come into his own and recognizes the thoughtfulness that Parker puts into breeding.

“[When you breed], you hope to get a quality horse,” Tosh stated. “A lot of people breed in [high] numbers to get one good horse. For Betsee [Parker] to breed minimally and for him to be this successful shows the strong lineage and quality of his dam. It’s been exciting to watch him come along. I knew his mother and then to see him progress from a foal to competing at the Capital Challenge Horse Show has been a fun process.”

While Duke of Argyll is done showing for the season, Parker and Tosh are looking forward to easing him into the 3’3” Green Hunter division next year — and he’ll have a very special fan rooting for him from across the Atlantic Ocean. Parker is a Baroness of Scotland through Scotland’s Duke of Argyll, Torquhil Ian Campbell. Campbell is the gelding’s namesake and enjoys following his career. “He watches our videos to see how the gelding is doing,” laughed Parker.

For Parker, awards like this are integral to demonstrate the type of horses that can be bred in North America. She notes that when the hunter/jumper community moved away from competing Thoroughbreds, breeding in North America took a back seat with many athletes choosing instead to import warmbloods from Europe. “I think it’s very important that our country [renews its focus on] breeding for the sake of truly understanding the relevance of bloodlines, the limitations, and also the spectacular foals that we can produce ourselves,” she concluded.