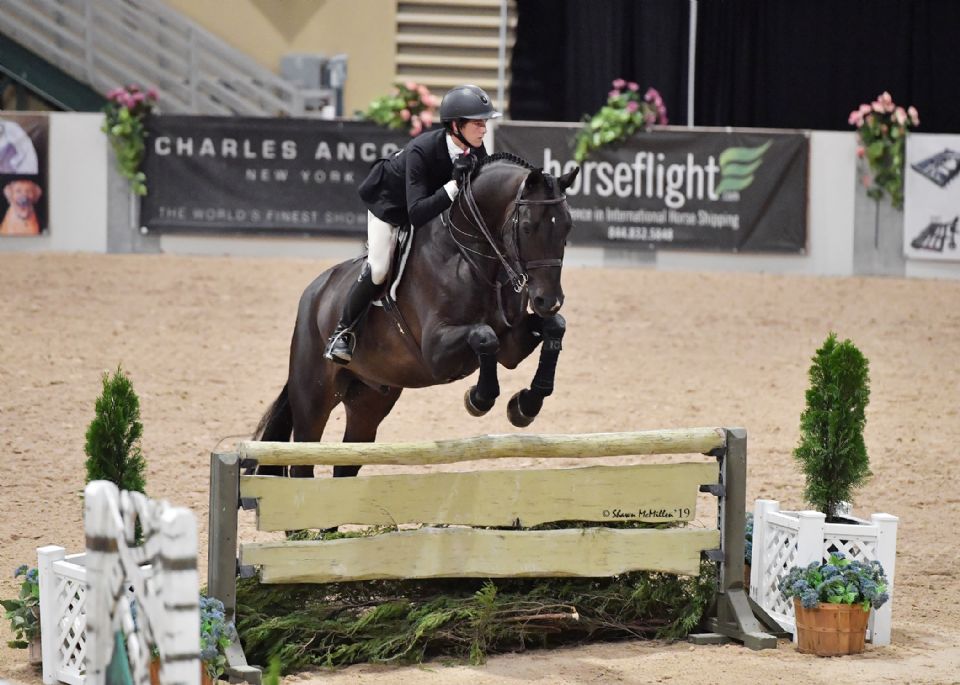 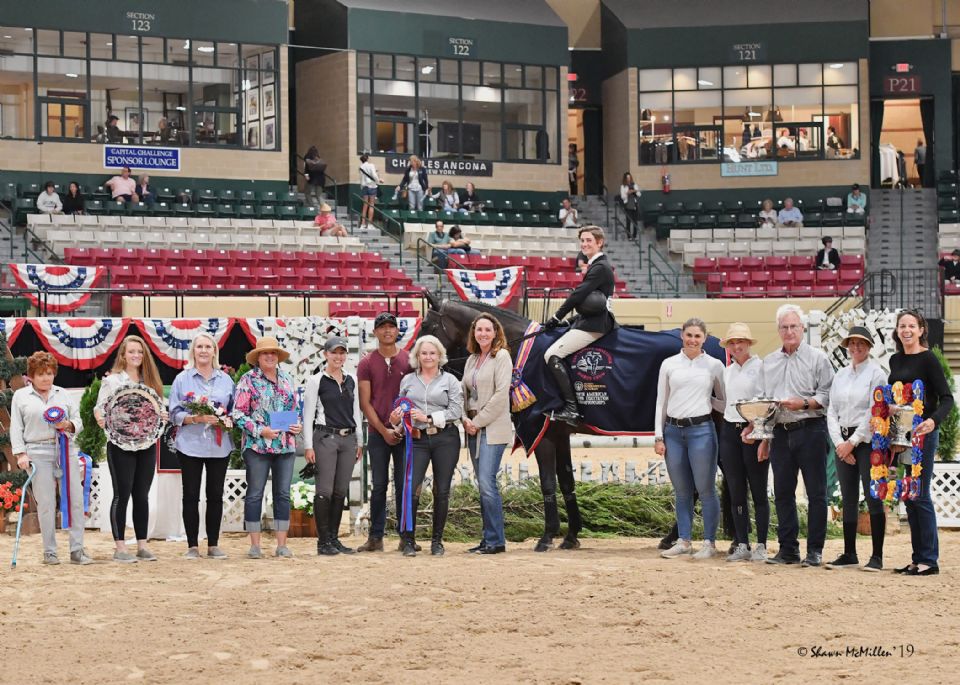 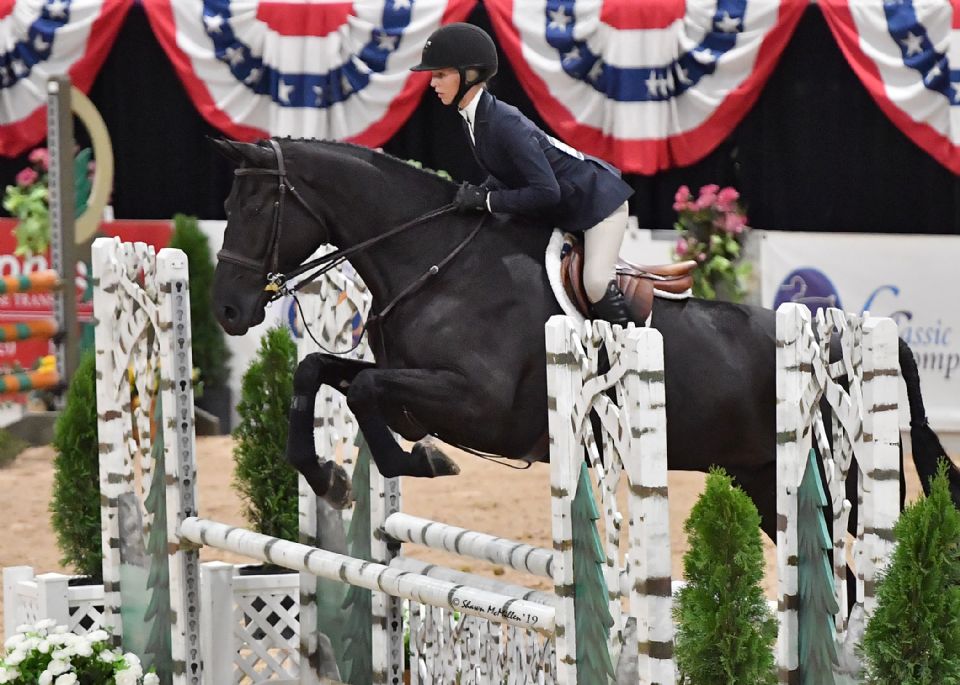 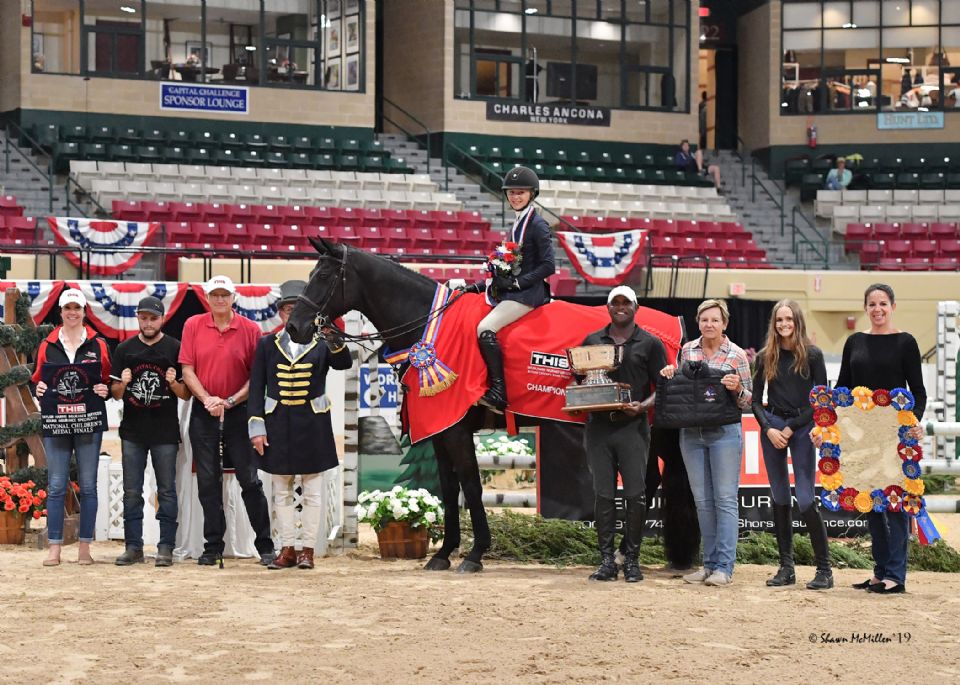 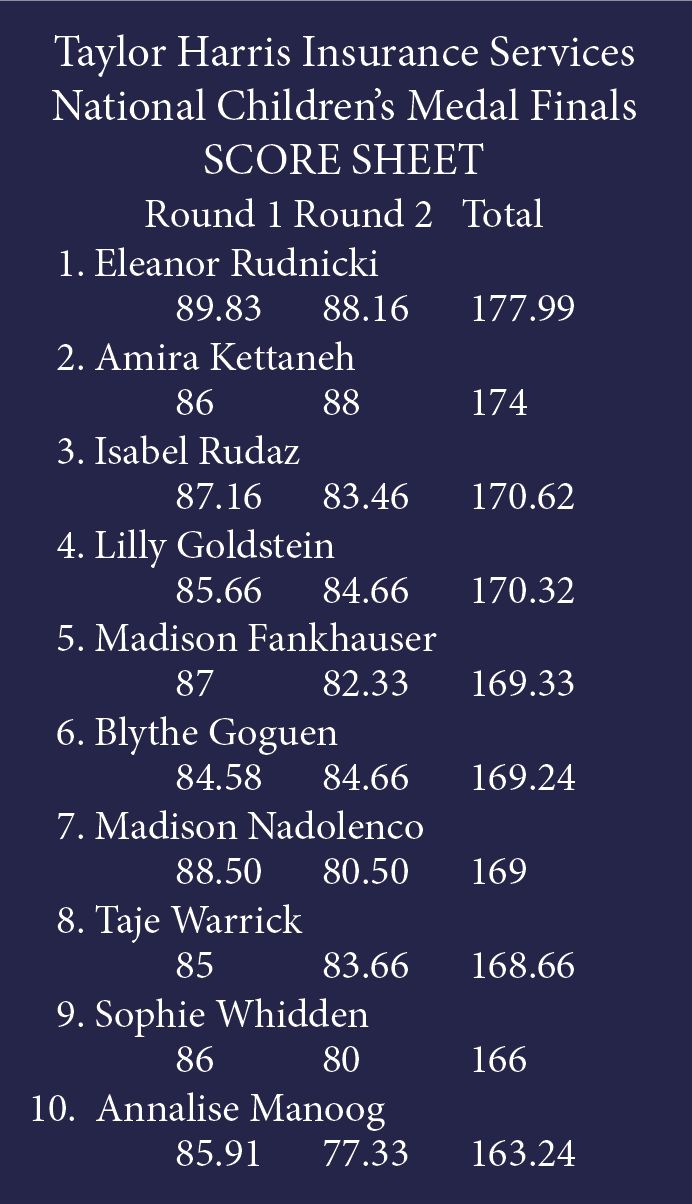 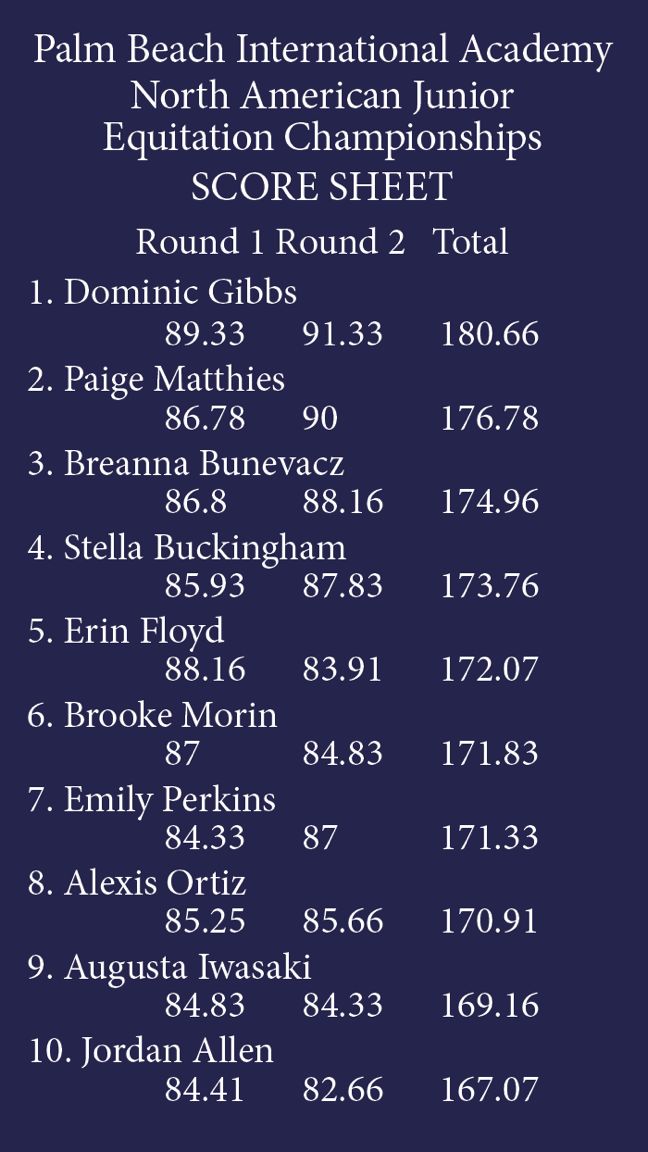 The final national championships of the BIGEQ.com Equitation Weekend at the Capital Challenge Horse Show were awarded to Dominic Gibbs and Eleanor Rudnicki on Sunday, September 29, at the Prince George’s Equestrian Center in Upper Marlboro, MD.

From September 27-29, more than 450 riders contested the three days of equitation competition that mark the start of the Capital Challenge Horse Show, which runs through October 6, and on Sunday, Gibbs bested a field of 116 of those riders to win the Palm Beach International Academy (PBIA) North American Junior Equitation Championships.

Following an opening jumping round, the top 20 riders in the PBIA North American Junior Equitation Championship were invited back to jump a second round in reverse order of their standings.

With a score of 89.33 earned over the first-round course designed by Ken Krome, Gibbs sat atop the leaderboard coming into the second round.

“The first round was amazing,” said judge Rob Bielefeld, who presided over the course alongside Linda Andrisani, Brian Lenehan, Jimmy Torano, Steve Wall, and Sissy Wickes.

“If you weren’t in the mid 80s you weren’t coming back,” continued Bielefeld, referencing the cut-off score of 84.78 needed to qualify and return for the top 20.

For Gibbs, returning last as the top-ranked rider was nerve-wracking, but he never let it show as he executed a seamless round to earn a score of 91.33 for a 180.66.

“I was saying to my mom earlier, before my second round, that I hate coming back in first!” said Gibbs, who trains with Stacia Madden and the team at Beacon Hill Show Stables in Colts Neck, NJ. “It’s so much pressure on the rider. I have been having to deal with nerves a lot lately, and I just had to really cool it all down and take the pressure off and ride the best that I can. I think just focusing on other things and not putting the pressure on really helps a lot.”

That approach worked on Sunday, with Gibbs’s final total of 180.66 putting him nearly four points ahead of the rest of the field, which eliminated the need for any additional testing. Finishing in second place with scores of 86.78 and 90.00 for a 176.78 total was Paige Matthies of Lake Leelanau, MI, riding Blurred Lines, owned by Barbara Smith. Third place was awarded to Breanna Bunevacz of Calabasas, CA, who earned an overall score of 174.96 aboard Vondel DH Z, owned by Epic Performance LLC.

“The horse [Gibbs] rides is a match made in heaven,” continued Bielefeld in speaking of Gibbs’s winning mount, Cent 15, an 11-year-old Hanoverian gelding owned by Mountain King Ranch LLC, that Gibbs began competing in February of this year.

“[Cent 15] is unbelievable. He’s one of the nicest horses that I’ve ever ridden,” said Gibbs, who has been living in New Jersey in order to train with Beacon Hill and who also trains with Harriet Bunker when he is at home in Colorado.  “I’m just so thankful for the amazing horses that I have and the amazing coaches. It feels really great, and I never thought I would be doing something this amazing. I don’t even know how to put the feelings into words.”

The EMO Equitation Trip of the Show, sponsored by EMO Insurance and presented to the rider with the highest scoring equitation round over the course of the week, went to Ellie Ferrigno of Newtown, CT, who earned a score of 90 in the 16-Year-Old Equitation.

The top 40 THIS National Children’s Medal competitors, qualifying from across the country, were invited to compete in the final at Capital Challenge, and the top 10 from Sunday’s first round then qualified to come back for the second round.

Finishing in second place with scores of 86 and 88 for a 174 total was Amira Kettaneh of Hollis, NH, aboard Automatic, owned by Leigh Kettaneh. Third place was awarded to Isabel Rudaz of Westport, CT, who earned scores of 87.16 and 83.46 for a 170.62 total with Ullrich, owned by Donald Stewart.

“To win the Taylor Harris Medal means a lot because my trainer and I have been working all year just to get here,” said Rudnicki, who trains with Berry Porter at Brookside Pine Farms in Conroe, TX. “This is my first year being at Capital Challenge, so it means a lot. This is my favorite horse show that I’ve been to so far. It’s just such a cool environment. It’s really fun.”

As the third-ranked rider in the THIS National Children’s Medal national standings, Rudnicki knew she wanted to con          test the final, but she was uncertain what horse she would compete on at Capital Challenge – until her best friend, Sophia Cady, made a kind offer.

“I was unfortunately hospitalized and unable to make it to ride this week,” said Cady, who intended to compete during BIGEQ.com Equitation Weekend as well. “So, we thought that we would like Eleanor to ride Cosmic for us, and we’re eternally grateful that she did!”

While Cady did not get to show herself, she was released from the hospital and able to be there on Sunday to watch her best friend win aboard her eight-year-old Oldenburg gelding CF Cosmic. For Cady, Rudnicki and CF Cosmic’s victory was an exciting silver-lining in an otherwise negative situation, and for Rudnicki, it made the win a little extra special.

While Sunday marked the conclusion of BIGEQ.com Equitation Weekend, competition at the 2019 Capital Challenge Horse Show continues on Monday, September 30, with the professional hunter divisions beginning at 7:30 a.m.

About the Capital Challenge Horse Show
Now in its 26th year, the Capital Challenge Horse Show, presented by the World Equestrian Center, sets itself apart with a distinct and unique focus on preeminent hunter and equitation competition. Held at the Prince George’s Equestrian Center in Upper Marlboro, MD, the 2019 edition of the Capital Challenge Horse Show is taking place now through October 6. The 10 days of competition include prestigious equitation events, jumper divisions, the World Championship Hunter Rider (WCHR) Finals, the $25,000 3’ and 3’3” Green Hunter North American Championships, and more, with many of the country’s best horses and riders competing in junior, amateur, and professional divisions. For more information, visit www.capitalchallenge.org.
Tweet