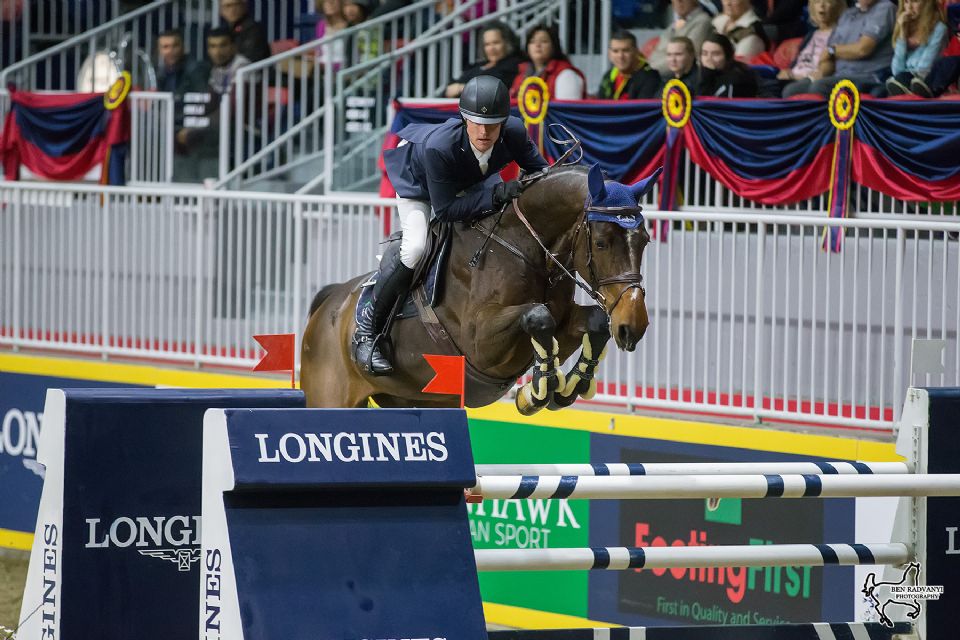 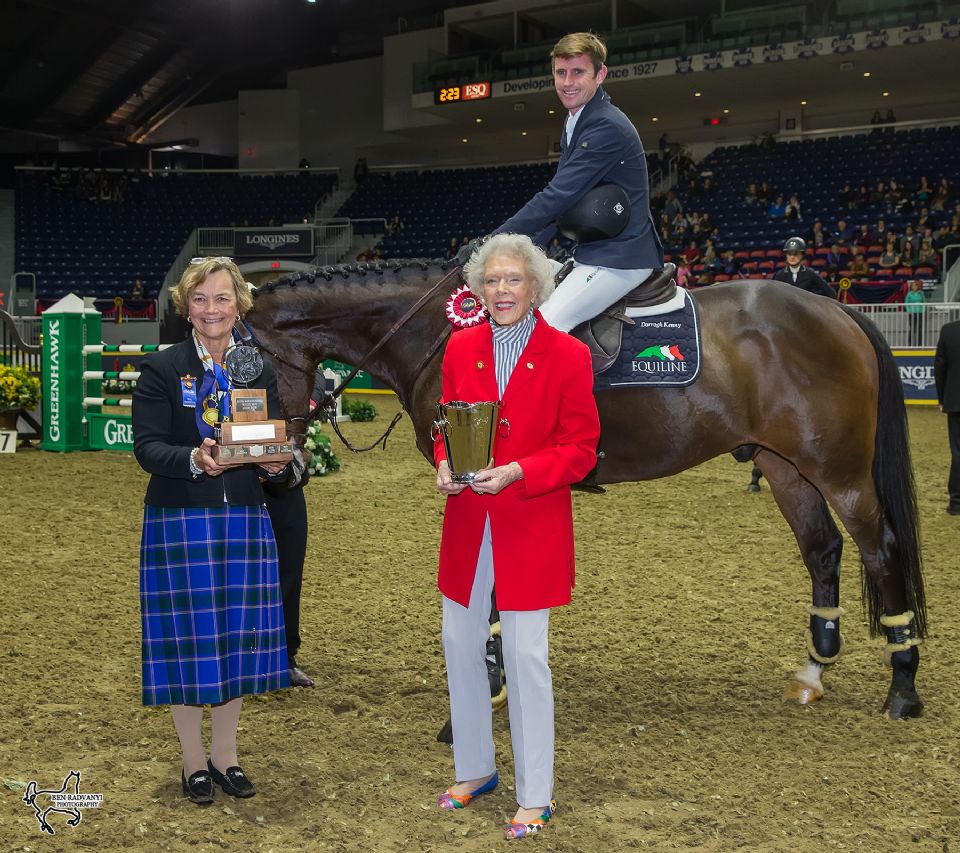 Darragh Kenny, mounted on Charly Brown, is presented with the Brickenden Trophy by longtime Royal Horse Show supporter Dorinda Greenway (right), who is still riding at the age of 96, accompanied by Fran McAvity.
Photo by Ben Radvanyi Photography 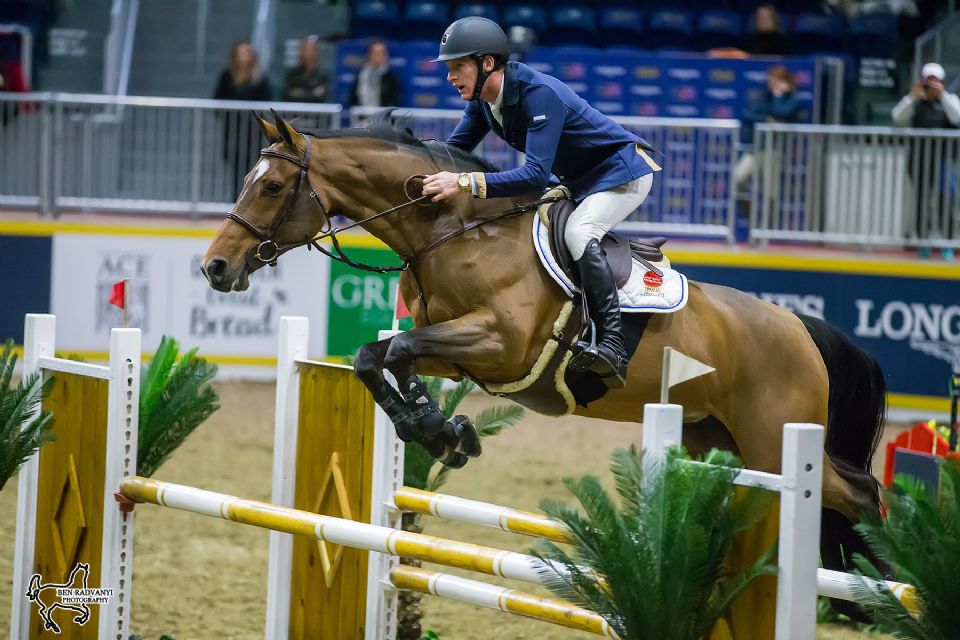 Another Irishman, Daniel Coyle, rode Fortis Fortuna to victory in the opening phase of the Alfred Rogers Uplands Under 25 National Championship at the Royal Horse Show on Thursday, November 10, in Toronto, ON.
Photo by Ben Radvanyi Photography 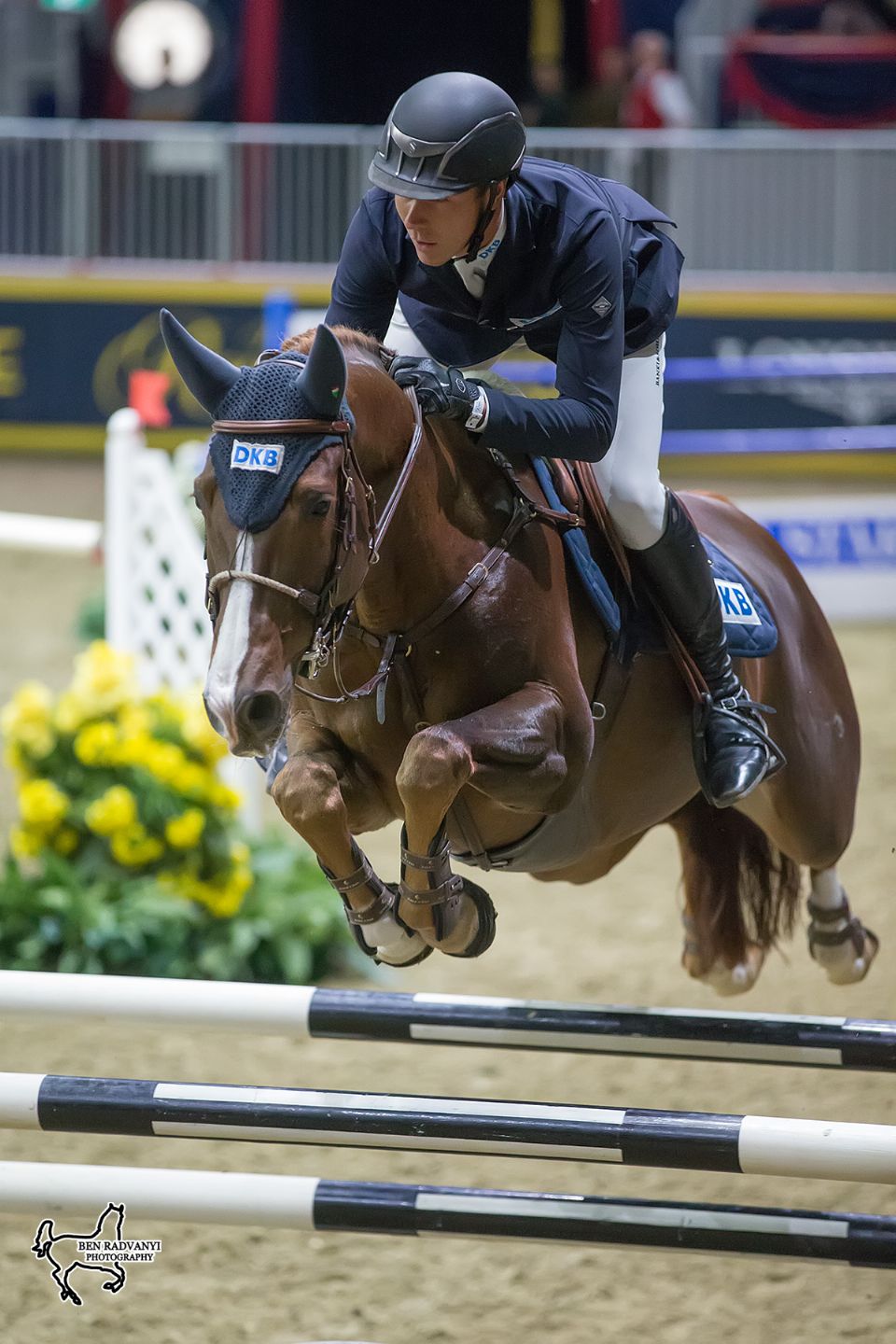 Ireland’s Darragh Kenny won the $35,000 Brickenden Trophy on Thursday, November 10, at the CSI4*-W Royal Horse Show, held as part of the 94th Royal Agricultural Winter Fair in Toronto, ON.

A total of 12 horses jumped clear over the track set by course designer Bernardo Cabral of Portugal to qualify for the jump-off.  Kenny, 28, was the final rider to return and laid down the fastest time of the day, 33.23 seconds, riding Charly Brown, an 11-year-old Belgian Warmblood gelding (Diamant de Semilly x Burggraaf).

“This is a very good horse,” said Kenny of Charly Brown, a horse acquired two months ago by Vlock Show Stables.  “He is intended for Teddy Vlock to ride, but I borrowed him for these two weeks while my horses are in Europe.  He is very experienced, has jumped a lot of big classes, and is really capable of doing anything.”

Canada’s own Vanessa Mannix of Calgary, AB, took fourth with a time of 35.67 seconds riding Winslow High while 1996 U.S. Olympic silver medalist Leslie Howard rounded out the top five with the fastest four-fault effort in the jump-off riding Donna Speciale, owned by Peter Howard and Laure Sudreau.  Her top placing allowed Howard to retain the blue armband for the Leading Lady Rider Award supported by Tiffany & Co., which she has held since winning the $35,000 International Jumper Power and Speed on opening day of the international division.

“The course was very good and it suited me,” said Kenny.  “A lot of people didn’t do the inside turn from one to two but this horse has a lot of experience so I could do it quite easily.  I knew I was up a little on the clock at that stage so I didn’t have to rush the rest of the course.

“Bernardo did an excellent job last night with the World Cup qualifier,” continued Kenny, who piloted Cassini Z to a top ten finish in the $130,270 Longines FEI World Cup Jumping Toronto for fellow competitor Mac Cone of King City, ON, and Southern Ways.  “It was perfectly done.  He got the perfect amount of clear rounds, and it was a super jump-off.”

“I love this show,” said Kenny, who last competed at The Royal in 2014.  “It’s very much an old-style show, and they run it brilliantly; the organization is super and the crowds are amazing.  To be honest, I don’t have a bad word to say about the show; I think they do everything perfectly.”

The luck of the Irish was evident in the Ricoh Coliseum as 21-year-old Daniel Coyle, also of Ireland, rode to victory in the first phase of the Alfred Rogers Uplands Under 25 National Championship.  Coyle secured the win riding Fortis Fortuna for owners Susan and Ariel Grange of Lothlorien Farm based in Cheltenham, ON, whose horse, Dixson, won the Greenhawk Canadian Show Jumping Championship on opening weekend with ten-time Olympian Ian Millar.  Quincy Hayes, 25, of Aurora, ON, placed second with Calgary 56 while 17-year-old Kathryn Dafoe of King City, ON, rounded out the top three riding Eos van de Donkhoeve, owned by KD Lan Solutions.

David Will of Germany broke up the Irish domination by winning the $35,000 International Accumulator on Thursday evening.  In his first-ever trip to Canada, Will scored an international victory riding Cento du Rouet by accumulating the most points in the fastest time.  Ireland settled for second with Shane Sweetnam and Cobalt placing ahead of Belgium’s Jos Verlooy riding Caruso 472.  Two-time Canadian Olympian Tiffany Foster of North Vancouver, BC, took fourth place riding Chesney for owners Artisan Farms while Calgary’s Vanessa Mannix rounded out the top five with Chemas.

Tickets for the Royal Horse Show can still be purchased by visiting royalfair.org or ticketmaster.ca.