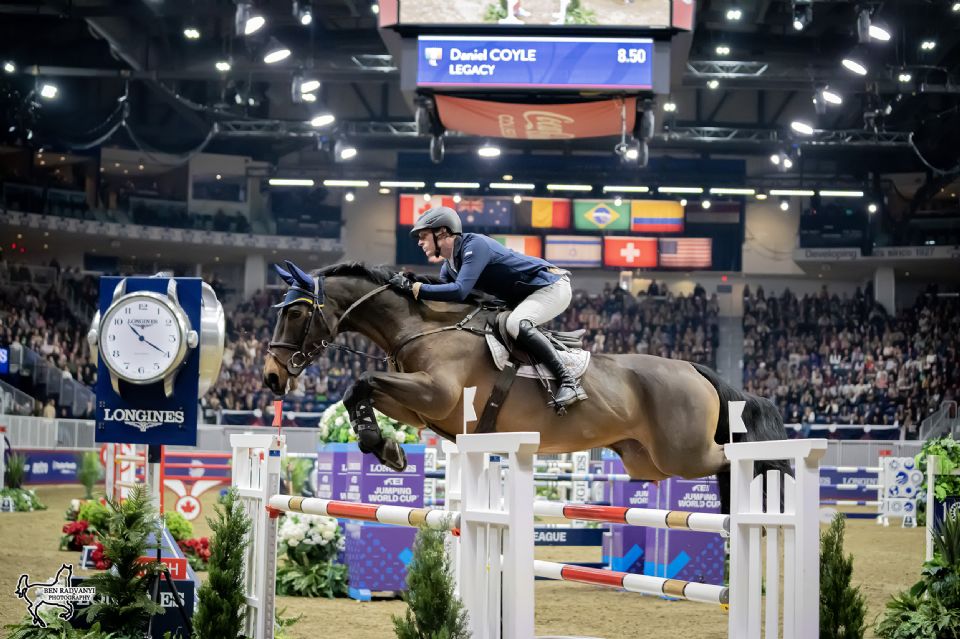 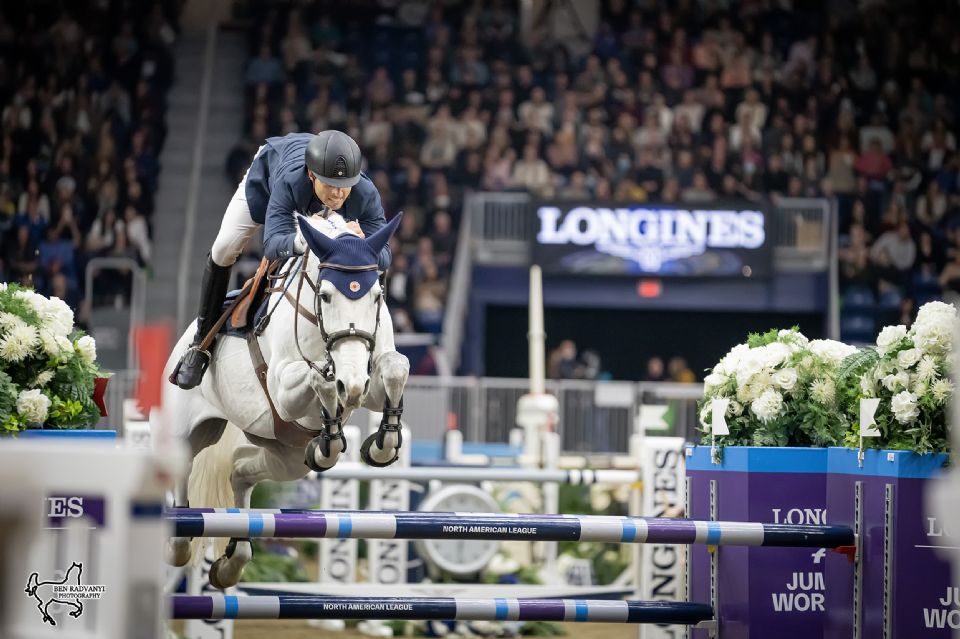 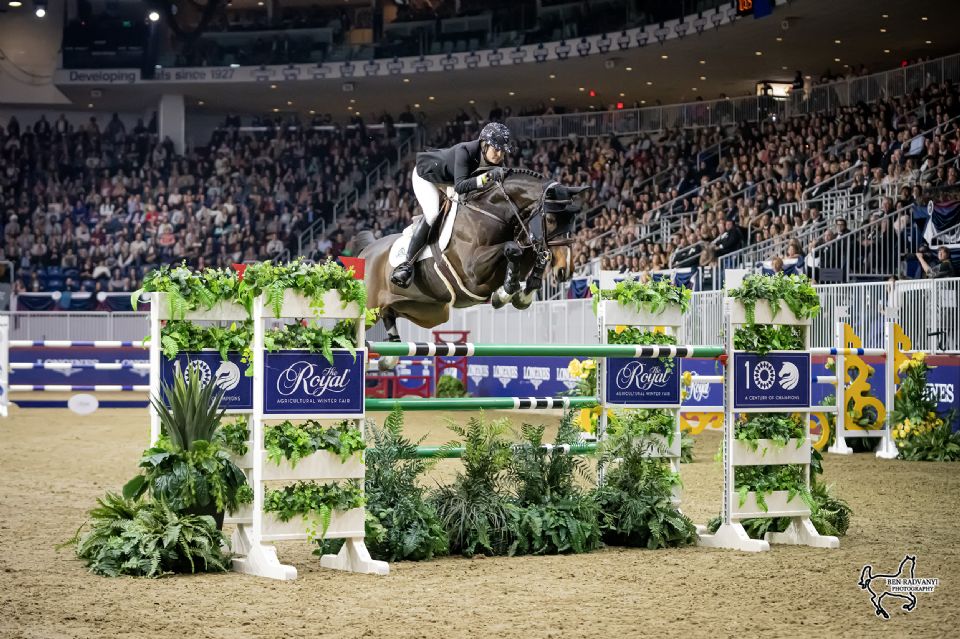 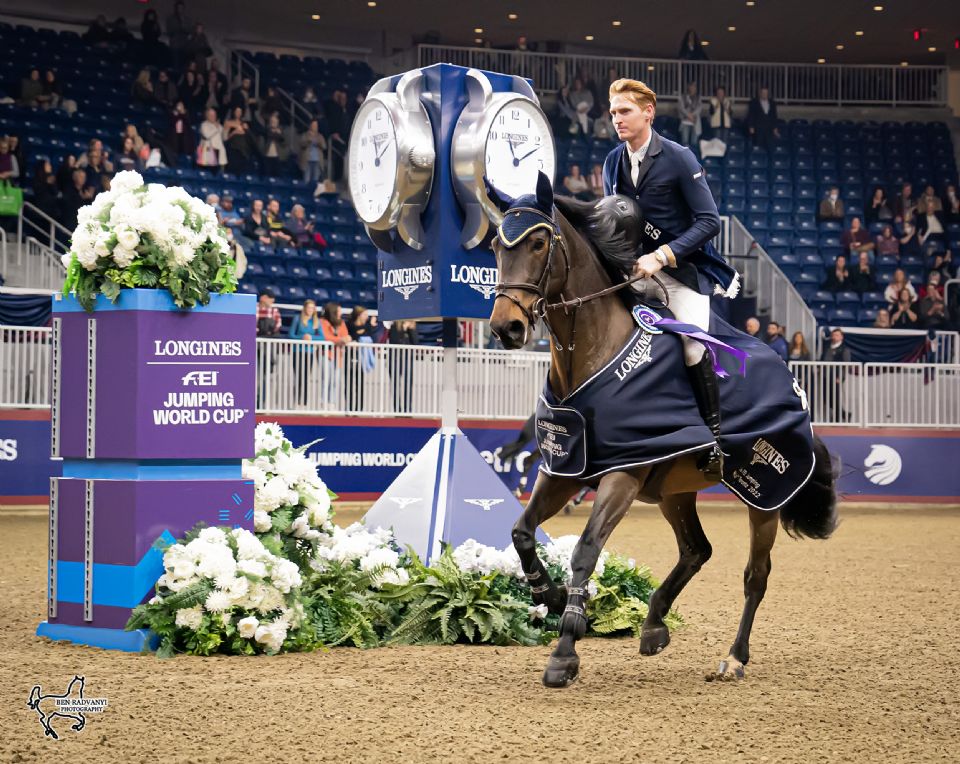 Ireland’s Daniel Coyle claimed a resounding victory in the $250,000 Longines FEI Jumping World CupTM Toronto on Saturday night, November 12, in front of a sold-out crowd to close out the Royal Horse Show, held as part of the 100th anniversary of the Royal Agricultural Winter Fair in Toronto, ON.

Canadian course designer Michel Vaillancourt set a challenging track and as rails fell around the course, it became evident riders and horses would have to be in perfect form to advance to the jump-off.  Two-time Canadian Olympian Tiffany Foster thrilled the home crowd with a brilliant clear performance aboard Northern Light, an 11-year-old Swedish Warmblood mare (Plot Blue x Contender) owned by Artisan Farms LLC.  Six rounds later, Coyle made it a jump-off by producing the second fault-free effort riding Legacy, a 12-year-old Zangersheide mare (Chippendale Z x Bon Ami).  As the penultimate rider, Israel’s Daniel Bluman made it a three-horse race when he piloted Gemma W to the final clear first-round.

Foster was the first to return to tackle the jump-off, picking up eight faults and exceeding the time-allowed of 44-seconds to to incur an additional time fault.  Next into the Coca-Cola Coliseum, Coyle and Legacy threw down the gauntlet, stopping the clock with a clear round in 37.02 seconds.  Bluman tried his best to catch Coyle’s time but paid the price with one rail down, leaving him in the runner-up spot.

“For sure it was not a simple course, and later on in the course was where the course designer was trying to test us the most,” explained Coyle, 28, who competed for Ireland at this year’s World Championships in Herning, Denmark.  “In the jump-off, Legacy can be very fast but I haven’t done that many where I’ve been really asking her to go as fast as possible.  I saw the distance early to the last fence and that gallop is something that I haven’t done much with her, but she went all the way."

In addition to hoisting the Hickstead Trophy presented to the winner, Coyle was also named the Leading International Rider and Legacy, owned by Canada’s Ariel Grange, was named the Leading Canadian-Owned Horse.  It was a triumphant finale for Coyle, who was just on the cusp of a top finish all week.

“The Royal is an extremely great show for a lot of reasons,” said Coyle. “It’s Ariel’s hometown, she’s from Toronto, and that’s where the home farm is, so it’s a really special show for that reason.  That’s maybe why I was trying too hard to have a good result this week and nothing was happening, but thankfully tonight it was good.”

“When you only have three riders for the jump-off course, things are a little complicated and you want to have some sort of strategy,” shared Bluman, 32.  “My plan was simple; I had to take risks.

“Gemma is a special horse for me and for the whole team,” he continued of the 11-year-old Dutch Warmblood mare (Luidam x Unaniem) owned by Blue Star Investments.  “She’s been very consistent and she’s a great warrior inside of the ring.”

To the delight of the audience, Foster was named the Leading Canadian Rider after her impressive results throughout this year’s Royal Horse Show.

“This show is something that all Canadian riders are so proud of,” expressed Foster, 38, who made her Royal Horse Show debut in 2001 when she won both the Jump Canada Medal and the Running Fox CET Medal national finals.  “A huge part of that is the organization and everything that goes into making this such a special event.  The most important thing, though, is the crowd and the energy that they give.  I can’t help but smile.  I love it and I’m so proud that they all come out.”

Charlie Johnstone, CEO of the Royal Agricultural Winter Fair, echoed Foster’s sentiment saying, “We are very, very excited about what happened here all week celebrating a century of bringing champions to Toronto with our partners from the FEI and Longines.  For 100 years, The Royal has really been about bringing the country to the city and being best in class.  Clearly what we saw tonight was best in class, and that is what we have stood for for the past century and what we will continue to stand for in the next century.”