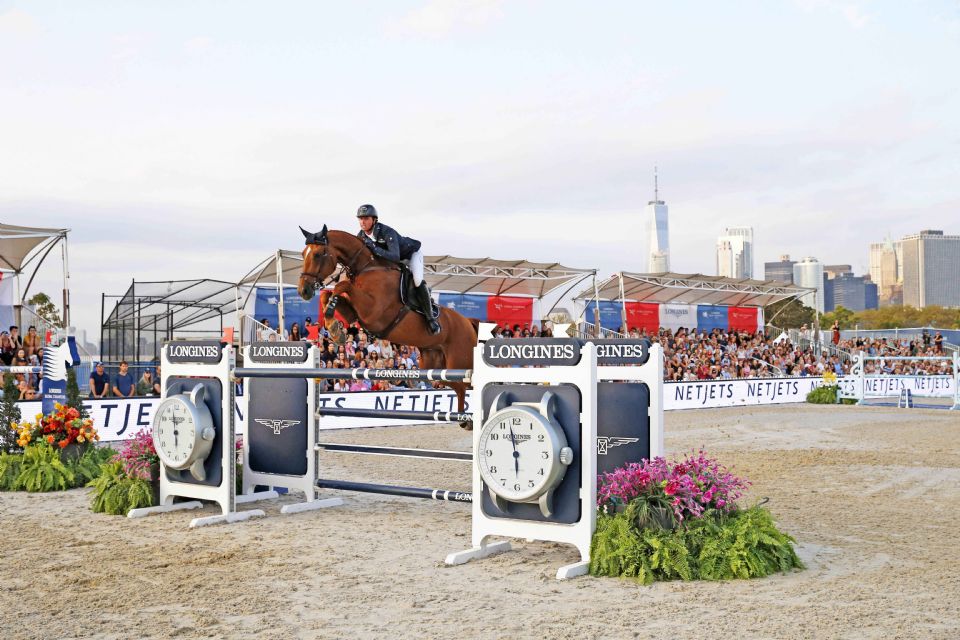 It was ‘game, set and match’ today after Ben Maher (GBR) wrote history aboard Explosion W in an extraordinary Longines Global Champions Tour Grand Prix of New York, taking the LGCT Grand Prix win and the 2019 Championship title just hours after helping to secure the GCL team series crown for the London Knights.

In the city that never sleeps it would turn out to be a superlative showdown with a script that sporting dreams are made of. With spectators filling the rafters of the grandstand and positioned in every inch of space, the equestrian world watched as the knife-edge Championship reached its conclusion on Governors Island.

Devos (BEL) led the overall ranking by just one point, but with pressure reaching fever pitch it was Ben Maher (GBR) who kept a cool head in a seven-rider jump-off to catapult himself to the title win - his second after taking the 2018 Championship.

A beaming Ben said: “I knew it would be a tough weekend - the dream was to win the team [title] and the individual. It doesn’t happen often. What a horse - he’s incredible. He understands me, I understand him, we have a great connection and it’s a pleasure to be in the sport like this.

"It's incredible [to win the title for a second year running]. Last year was unexpected, this year I’ve used Explosion a little less, I’ve used Concona, Madame X and F One USA, so I’m lucky to have so many great horses and great owners."

In a touching sporting moment Maher praised his rival Pieter Devos, who was just beaten into second place in the Championship. “[Pieter] gave a great fight, it was a push all the way to the end. I’m sure he’s going to come back strong.”

Pieter Devos (BEL) was awarded a well-deserved runner up place in New York today, just shy of the win he so hungered for. Speaking in the press conference he said: "I am proud to be second after one of the best combinations in the world. I am proud of my horses and what they have achieved for me - they did an incredible job and I want to thank them for that. It has been great sport all season, not just this weekend. I want to congratulate Ben and Daniel, Ben did an incredible job."

Third place went to Daniel Deusser (GER), the first time the German rider has rounded out the top three in the Championship race. Deusser said: "Ben and Pieter this year have been in a totally different league. You see how much closer everything got and it has been a tough Championship throughout the whole season. There are multiple different places on the Tour - grass arenas, sand arena, small and big arenas. I tried my best but couldn’t reach Ben and Pieter."

In the breathtaking display of top sport and entertainment, the Finals of the 2019 Longines Global Champions Tour season hit the ‘big apple’ in New York for the first time ever. Set against unprecedented views of downtown Manhattan, the 18-event Championship race came to its climax under clear blue skies and balmy September weather.

LGCT President and Founder Jan Tops highlighted the calibre of competition: "It has been super exciting all season. It was down to the last round and we had great riders in the jump-off. This is the highest level of sport you can see.

"It is important for us to be in New York. America is an important horse nation and we have a strong footprint in the States. We found a good place for the horses and riders [on Governors Island]. We have started a fantastic tradition for years to come."

Maher took the win today on the Poden Farms owned Explosion W, ahead of Marcus Ehning (GER) who secured the final golden ticket to the LGCT Super Grand Prix with his second place result today. Third went to Martin Fuchs (SUI) after a tantalising jump-off saw drama down to the final fence.

Speaking about the talented 10-year-old chestnut gelding, Maher said: “[A horse like Explosion] only comes around maybe once in a lifetime. I’m so thankful to Poden Farms to be able to ride a horse like this and Cormac, his groom."

Fans filled every space possible around the arena, packing into the bustling shopping village to catch glimpses of their show jumping heroes competing under the watchful eye of the Statue of Liberty. The chic hospitality was full to the brim with high profile guests, including former New York Mayor Michael Bloomberg, Bruce and Patti Springsteen, Donna Karan and Christy Turlington.

All enjoyed a passionate rendition of “New York, New York” performed by the Sing Harlem choir, before the National Anthem rang out around the arena, giving all goosebumps and heightening the anticipation for the action to come.

Uliano Vezzani produced a masterclass of a course, making full use of the large sand arena. A hefty Longines triple combination made its first appearance of the weekend, and a bush-filled green and white double set by the VIP tent caught the eye of a few horses. The spectacular Statue of Liberty and Empire State Building flanked vertical took centre stage in the ring, and gappy NY silhouetted vertical gave the riders plenty to think about.

First round
There was plenty of hard luck stories to start the competition, with two early retirements from Leopold van Asten (NED) with VDL Groep Miss Untouchable and Harry Charles (GBR) with Borsato showing this was one Grand Prix course worthy of a Final. The green and white oxer fell for Edwina Tops-Alexander (AUS) with her 10-year-old gelding Casquell, as did the yellow water tray oxer and the Longines triple, meaning last year’s LGCT Super Grand Prix winner would not qualify for the GC Prague Playoffs this year.

However the crowd were in for a treat after Alberto Zorzi (ITA) and his 11-year-old black mare Ulane de Coquerie pulled off a jaw-dropping round, the crowd cheering in appreciation as they flew across the finish line with a flick of the tail. Marcus Ehning (GER) brought out his experienced stallion Cornado NRW - the magnificent one-eyed horse responding beautifully to the German rider’s requests. They brought home the second clear of the day, meaning there would be a jump-off, with the crowd roaring their approval from the stands.

With the 2019 Championship title hanging in the balance, all eyes were on leader heading into this event Pieter Devos (BEL), the Belgian rider trotting smartly into the arena with his top mare Claire Z. With his blue leader armband tight on his right arm, the pair set off with determination, Devos allowing the mare as much time to the fences as possible. They survived a lucky rub of the NY silhouetted vertical and pulled through, delivering the much needed clear and keeping their dreams of the 2019 Championship alive.

Another big name to fall short of a place at the LGCT Super Grand Prix was Scott Brash (GBE), the British rider electing to retire Hello Mr President after they rolled an early pole. Other stars to be out of the running this year included Simon Delestre (FRA), Harrie Smolders (NED) and Daniel Deusser (GER) who agonisingly had the final fence down with Killer Queen VDM.

Hopes of an American name to join the jump-off were raised as Jessica Springsteen (USA) took to the track with her top mare RMF Zecilie, the 12-year-old horse floating over the fences in her unique style. But two fences down would dash that dream, the pair out of the running for back-to-back LGCT Grand Prix wins.

But there were smiles aplenty after Malin Baryard-Johnsson (SWE) and H&M Indiana rocketed around the arena to add their names to the jump-off line up. They would be joined by Marc Houtzager (NED) and Sterrehof's Dante after they too pulled off a breathtaking clear.

The other big contender in the Championship title fight, Ben Maher (GBR) was next to enter with his formidable chestnut gelding Explosion W. With the big horse’s ears pricked and alert, they took to the track, Maher letting Explosion find his natural rhythm. They would pull out all the stops, clearing the fences with plenty of air and bring home the much needed clear. It would be game on between Devos and Maher for the 2019 title.

Martin Fuchs (SUI) continued his form, piloting The Sinner clear to add their names to the jump-off. The final rider to go in the first round was also the final hope of an American win, former World Number 1 Kent Farrington (USA) with his 11-year-old mare Austria 2. But the first part of the green and white double fell, meaning it would be a superlative 7-rider jump-off.

Jump-Off
First to return would be Alberto Zorzi (ITA) and Ulane de Coquerie, the Italian rider keen to add his name to those qualified for the LGCT Super Grand Prix and bragging rights of the debut LGCT Grand Prix of New York. The naturally agile horse powered around the course, Zorzi allowing the mare to travel across the ground and fly to the fences. They stopped the clock in 35.11s, throwing down a tough gauntlet for the rest to follow.

Marcus Ehning (GER) and Cornado NRW took out a stride to the GC vertical, and rocketed down the final line, just inches away from the Empire State Building statue to fly over the last in 34.65s - there was a new time to beat.

Championship contender Pieter Devos (BEL) returned with Claire Z, the Belgian rider galloping from the off. But there was drama after Claire stopped at the second part of the Longines double - a gasp from the crowd matching the dismay etched on Devos’ face as they finished the round.

Malin Baryard-Johnsson (SWE) put in a brave try with H&M Indiana - slicing the fences on the angle to try make up time. They finished clear but had to settle for 35.68s, behind Zorzi on time.

Marc Houtzager (NED) and Sterrehof's Dante gave it all they had, but couldn’t match the speedy time - finishing in 35.31s.

Knowing he had the Championship in the bag, Ben Maher (GBR) let the brakes off Explosion W - the formidable chestnut horse loving the challenge and leaping every fence clear. They powered to the finish, stopping the clock in 34.08s and taking the lead.

Final rider to go Martin Fuchs (SUI) had the last chance to better Maher’s time with The Sinner, but despite a valiant try they had to settle for third fastest, stopping the clock in 34.95s.

So it would be back-to-back titles for Ben Maher (GBR) securing both the 2018 and now 2019 LGCT Championship. The focus will now be on Prague, and the GC Playoffs, where the Longines Global Champions Tour Super Grand Prix and the GCL Super Cup will play out this November.

For more information, or to Tune in LIVE via GC TV, visit www.gcglobalchampions.com.