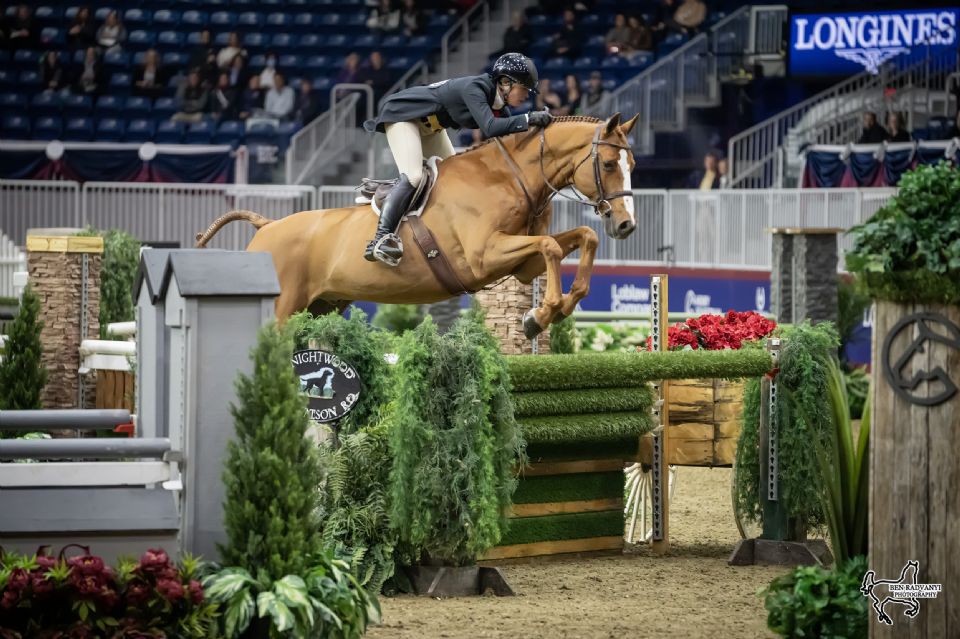 Carly Campbell-Cooper of Omemee, ON, and Capriati on their way to capturing the Canadian Hunter Derby Championship title on Tuesday, November 8, at the Royal Horse Show in Toronto, ON.
Photo by Ben Radvanyi Photography 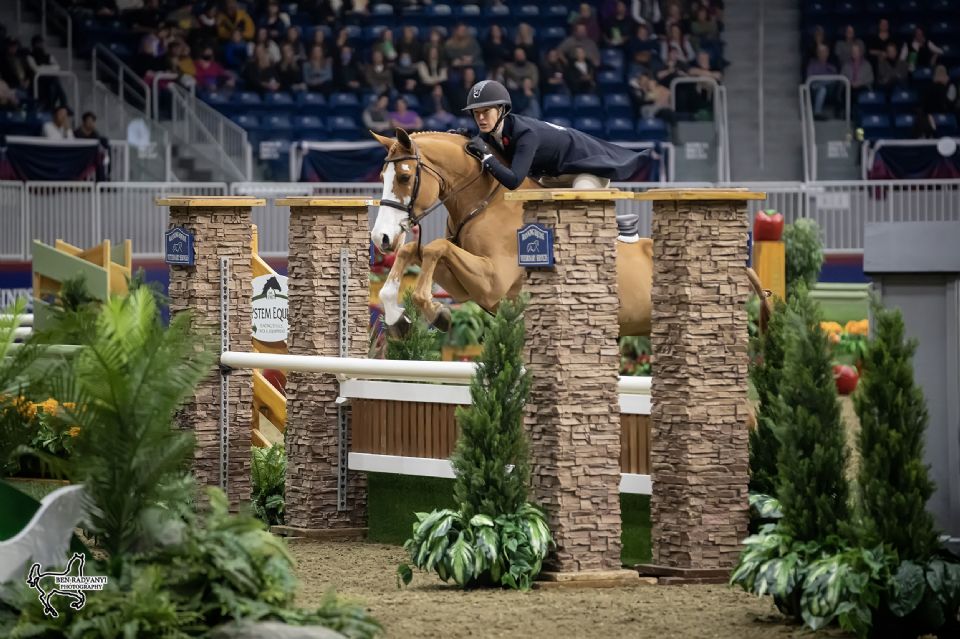 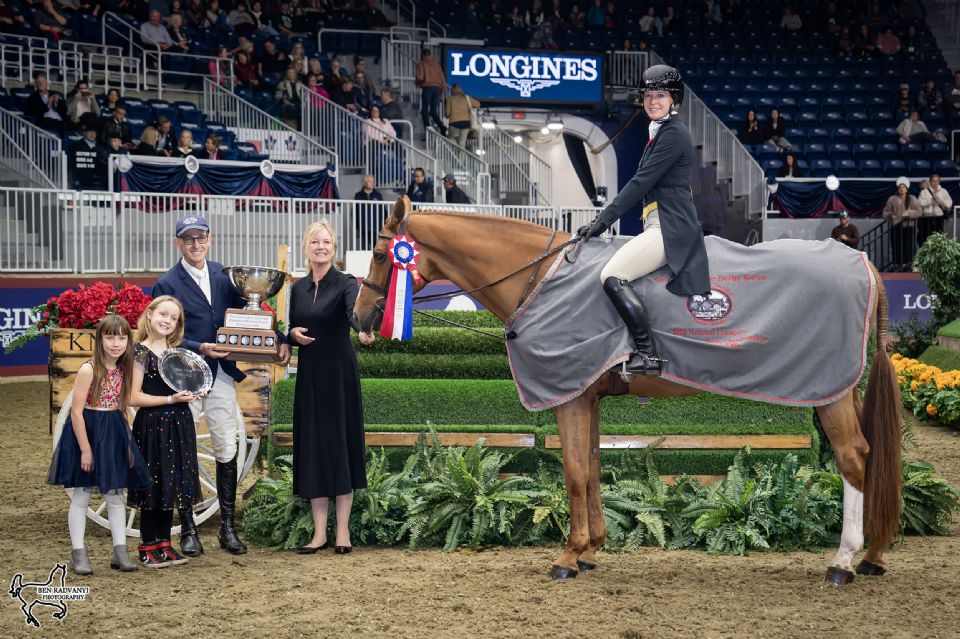 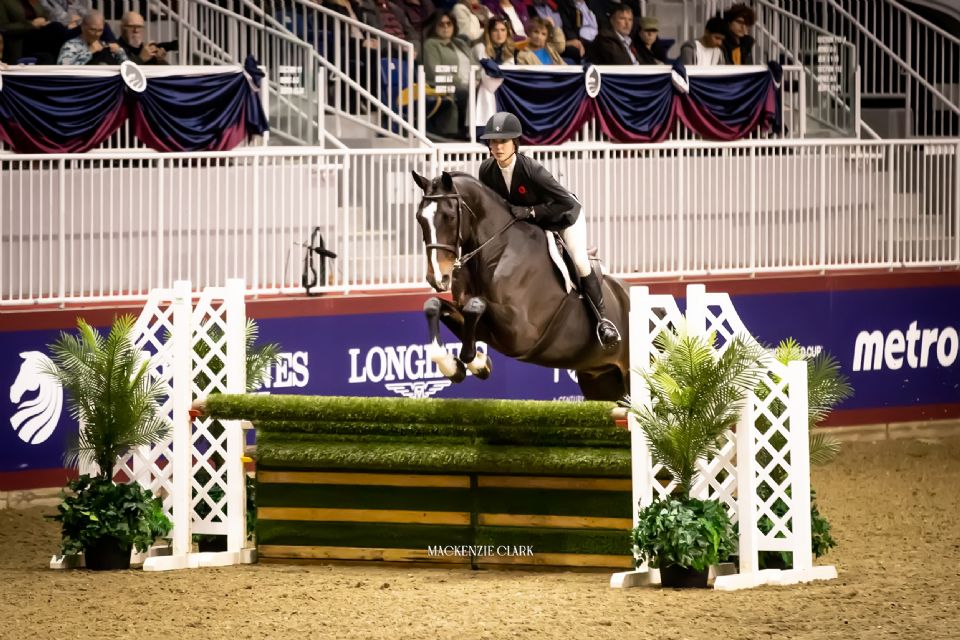 Carly Campbell-Cooper of Omemee, ON, was presented with the Lorna Jean Guthrie Challenge Trophy as the overall 2022 Canadian Hunter Derby Champion on Tuesday evening, November 8, during the Royal Horse Show, held as part of the 100th Royal Agricultural Winter Fair in Toronto, ON.

In the $25,000 Knightwood Hunter Derby, Campbell-Cooper and Capriati were the penultimate combination out of a starting field of 20 competitors to take on the impressive derby track designed by Canada’s Meghan Rawlins.  Campbell-Cooper received a base score of 79.75 with eight handy points and 10 high option points for an overall score of 97.75 from the judges.

“I thought tonight’s course was hard,” said Campbell-Cooper, 40, who has been competing at The Royal since she was 12 years old.  “I loved the gallop to the last jump.  That’s one of my favorite things to do.  The derby on Sunday was nice and welcoming; it flowed nicely and let the horses get in the ring for a softer first day.  Tonight certainly felt like a step up.  There were a lot of tests and there were a lot of places you could show your handiness or be a little more conservative depending on the level you and your horse were at.”

Campbell-Cooper has been partnered with Capriati, a 14-year-old Dutch Warmblood gelding (Carembar de Muze x Continue), for the past two years.  Together the pair have checked off many “firsts,” including earning the Canadian Hunter Derby Championship title.

“Tonight is my first time being derby champion at The Royal,” said Campbell-Cooper, who has competed in the hunter, jumper, and equitation divisions over the years.  “We’ve been here a lot, but it’s such a special atmosphere and such a special venue, so I still get the butterflies every year I come.  It’s a special feeling to win.

“The Guthrie family has been such a great sponsor of horse sport for so many years,” continued Campbell-Cooper.  “I’m really excited that Muffie Guthrie and Jeff Brandmaier are involved in the derby series.  It’s really important for Canada to keep having these classes and showcasing the hunters.”

The overall 2022 Canadian Hunter Derby Reserve Champion was Taylor Brooks, of Ashton, ON, and Spectre, a nine-year-old Zangersheide gelding owned by Taylor Bond.  The pair earned fourth place in the $15,000 Braeburn Farms Hunter Derby on Sunday before winning the $25,000 Knightwood Hunter Derby on Tuesday.  Brooks and her mount earned a high base score of 87 with eight additional handy points and 10 high option bonus points for an impressive total score of 105.

The Royal also offers numerous hospitality experiences that sell out quickly.  The Royal Terrace is available for VIP and corporate hosting while the Coliseum’s Sky Suites offer stables and groups their own private suites.  New for 2022, the Tanbark Club offers an upscale luncheon buffet on select days.  Visit www.royalfair.org/hospitality/ for more details.