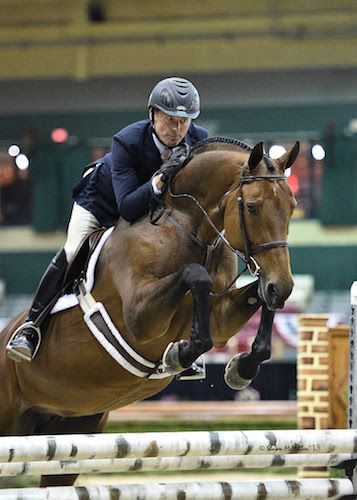 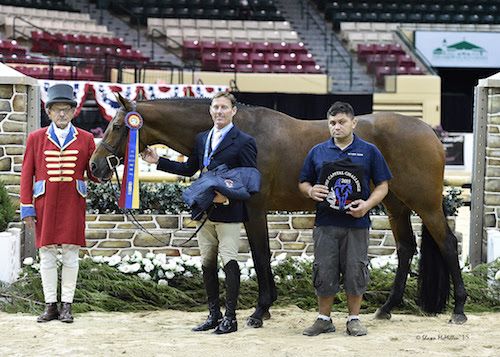 Scott Stewart and A Million Reasons in their presentation ceremony.
Photo by Shawn McMillen Photography 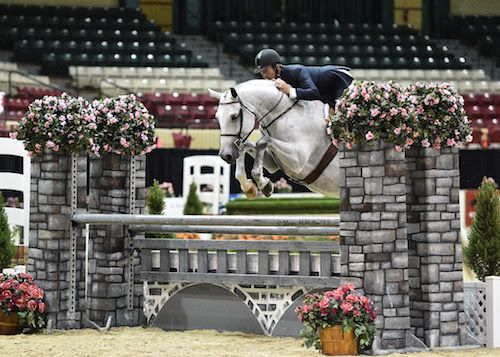 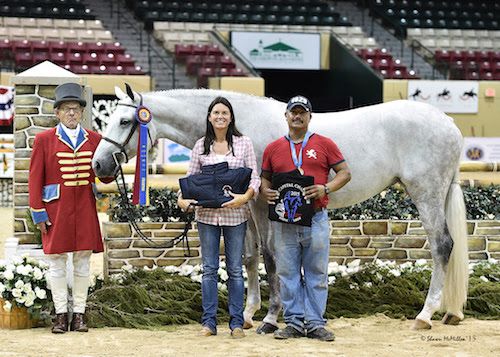 Pandora and Mandy Tosh in their presentation ceremony.
Photo by Shawn McMillen Photography 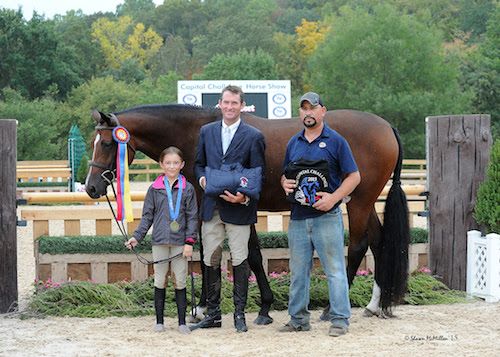 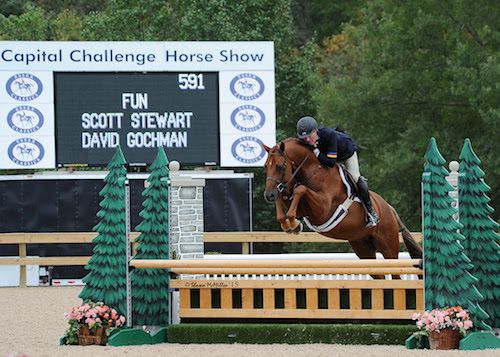 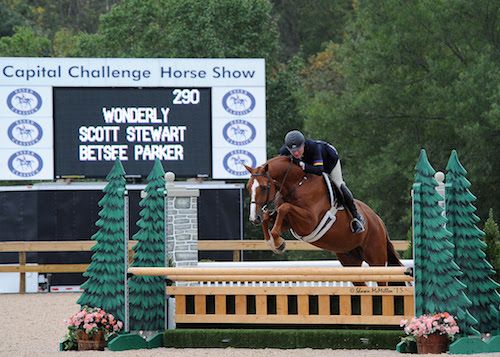 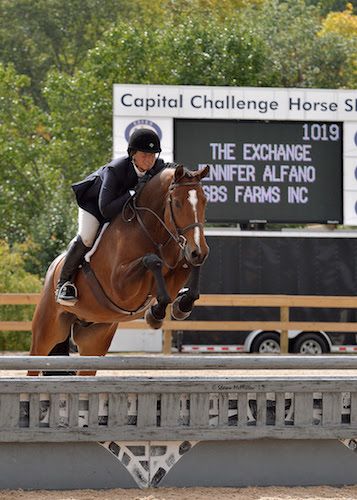 Jennifer Alfano and The Exchange.
Photo by Shawn McMillen Photography 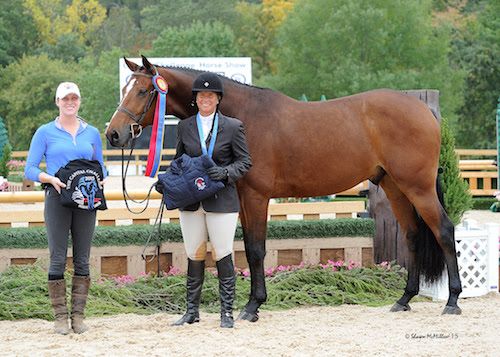 Jennifer Alfano and The Exchange in their presentation ceremony.
Photo by Shawn McMillen Photography 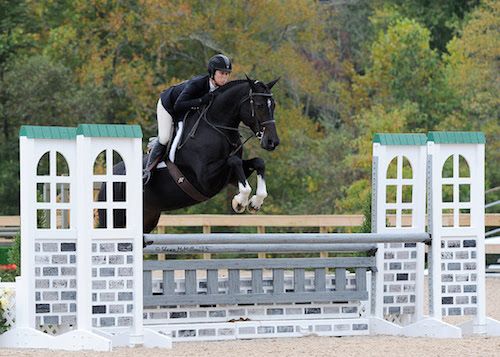 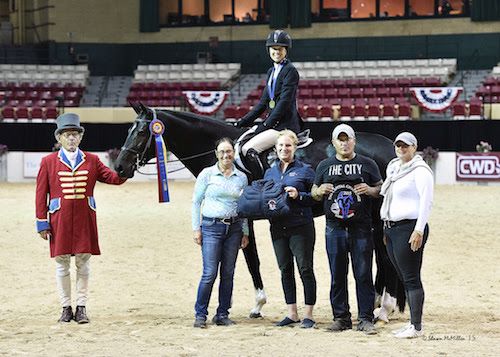 Liza Boyd and Gala in their presentation ceremony.
Photo by Shawn McMillen Photography 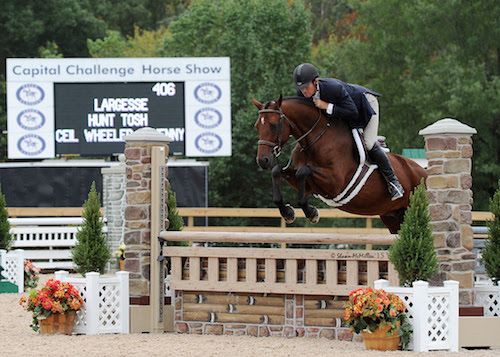 Scott Stewart of Wellington, Florida, made a strong statement in the ring today, piloting several of his mounts to divisional championships throughout the day. From horses in the Future Hunter 5 & Under Division to mounts competing against the best in the High Performance Hunters, Stewart made the most of his day at CCHS, laying down consistent rounds well received by the judges.

A Million Reasons, owned by Dr. Betsee Parker, captured top honors in the High Performance Hunter division presented by Sherre Sims and Rendezvous Farm, collecting scores of 89.25, 91.00, 85.00, and 83.25 in their respective four over fences classes in the division, as well as going on to earn the winning ribbon in the under saddle portion of the division. Stewart and A Million Reasons sealed the High Performance Hunter Championship honors in front of Kelley Farmer and Mindful, who followed with reserve honors.

“She’s really been great all year, and she honestly seems to do better in the indoor atmosphere,” said Stewart. “The first time I ever showed her was last year at Washington [International Horse Show] and she was very good.”

The 2005 Holsteiner mare (Coriano x Inema) has become a major presence in Stewart’s talented and ever-growing string of top hunter mounts since he took over the ride last fall and she continues to add winning trips in many of the largest hunter classes offered in the United States. The duo was rewarded for their nearly perfect round yesterday, receiving a 91.00, which was the division’s overall highest score.

“Yesterday she just went unbelievably. We tried to match that today and didn’t quite get there but it was still very good. She has a very big stride, and it’s easy to ride and stay smooth,” he explained. “When she broke into the 90’s yesterday I thought it was just flawless on her part. She’s so pretty in between the jumps and is just the true definition of a hunter."

A familiar face around the CCHS grounds for a number of years, Stewart returns to the show because of the quality of competition and the opportunity to compete a variety of horses. He will continue the week contesting the WCHR Pro Challenge and Pro Final classes hosted at CCHS on Wednesday, September 30, and Friday, October 2.

“I think everyone always brings their top horses here and always aims to do their best. It is really one of the most competitive shows of the year in my opinion,” he commented. “It’s just everyone’s A-game and the conditions are always great, the jumps are good, and I think the horses are always well-behaved. It’s the start of indoor season and that is always a very important time for everyone. I think this show is a special kick-off.”

Hunt Tosh of Alpharetta, Georgia, also had a banner day, collecting divisional titles in the Second Year Green Working Hunters, Performance Hunters 3’6” presented by Nicole Kane and South Shore Farms, and the Future Hunter 3’3” division sponsored by Tosh and his wife Mandy. Tosh, who brought a number of talented horses to Capital Challenge this year, rode Pandora, owned by Teton Farms, LLC to a tricolor in the Second Year Green Working Hunter division, after only taking the ride on the 2007 grey Warmblood mare last week in Lexington, Kentucky.

“I just started riding about a week ago so she’s still pretty new to me. She held it together in the first class yesterday and she was definitely pretty fresh, but today she just went beautifully and I thought she was incredible in the first class today,” said Tosh. “She had a great round in the handy, and it was nice to pull that back together after a small miscommunication yesterday.”

“She just jumped beautifully in the schooling ring and the first trip of today was by far her nicest trip. She’s very scopey and rangey. Just very straightforward and a solid and easy ride,” he continued.

Tosh added to his early success with a solid performance from Cold Harbor, owned by Dr. Betsee Parker, who took divisional honors in the Performance Hunter 3’6”. Tosh is eager to return to Capital Challenge each year and believes the show highlights the best of the hunters and the foundation of the sport. “It’s really special here and they do such a great job with presentations and make such a big deal out of the horses and riders, which is incredibly nice,” he noted. “Everyone is geared up here, and we all know that we’ll be seeing a lot of each other through the indoor season. It’s an important show for everyone heading in that direction.”

The Future Hunter divisions at Capital Challenge have quickly become the most heavily entered classes throughout the competition week. With five separate divisions, professionals and amateurs alike are able to showcase their young hunter talent on a national stage.

Liza Boyd, who competed several horses throughout a number of Future Hunter classes, commented on the success of the program and how she hopes it will progress, “I think the Future Hunter division is amazing, and I’m truly impressed with how it has grown over the past few years. I think it is the best thing that has happened to our industry because it has made people want to go out and buy young horses. I’m incredibly excited to watch the finals tomorrow because horses from this class have always gone on to be famous horses and that is something really amazing for the sport.”

“The Future Hunter division is just great. These are going to be the horses that are here next year doing the big classes and that is always a highlight to see how they progress throughout the year,” commented Stewart.

As for his string of world-class talent, Stewart commented that he feels privileged to compete such a gifted group of young horses. “They’re all just incredible horses and different in their own ways. They’re extremely nice rides and I am lucky to have them,” he said.

Jennifer Alfano of Buffalo, New York, was delighted when she and The Exchange, owned by SBS Farms Inc., topped the Future Hunter 6 & Over division presented by David Belford, Christopher Payne and Susan Moriconi, receiving consistent scores from the judges throughout the two-day division, which is part of The Exchange’s charm. According to Alfano, “He is absolutely the sweetest horse and I just love him. He felt great and is just so smooth and consistent to every jump. He jumps them all the same.”

Sourced by Sherre Sims of Houston, Texas, The Exchange started his career with Sims before changing hands to Alfano this past May. Full of character and personality, The Exchange captured Alfano’s heart and she decided to purchase the gelding after Sims teetered with the idea of putting him up for sale.

“Sherre started him herself, and she did an absolutely incredible job. I happened to be in Houston this spring and she asked if I would take the ride on him and I was just honored and thrilled,” she explained. “I owe her a very special thank you for a, making a great horse and b, giving me the opportunity to ride him.”

The Exchange will head to Harrisburg after Capital Challenge to test the Pre-Green Hunter division with Alfano in the irons but the Future Hunter division offered this week has given the duo the last bit of confidence they needed before taking on another big indoor stage. “I love this Future Hunter concept and all of the divisions included within it. It’s really nice place to offer it and having the big class inside tomorrow makes it a great place to have Pre-Green horses,” she pointed out.

After taking an unprecedented third USHJA Derby Finals Championship aboard longtime partner Brunello earlier this summer, Liza Boyd, of Camden, SC, continued to showcase a number of up-and-coming mounts this week at CCHS, who will hopefully, in the near future, aim to one day be as successful as their celebrated barn-mate.

“She is just so beautiful in almost a handsome way. She’s just gorgeous and refined, but really sturdy which I think sets her apart,” said Boyd. “I’m just so happy to be on her and to have the Hallman’s ask me to ride her for them. They have done all of the hard work, and I was just able to get on and have fun.”

Gala, brave by nature and stature, is uncharacteristically calm for a young mare and Boyd was impressed with her ability to handle the large atmosphere of The Show Place Arena at Prince George’s County Equestrian Center. She recalled, “She just marched into that ring and even though the jumps were bright and there was a lot to look at, she showed me that she has so much scope for the future and will definitely be a true 3’6” horse and shine.”

“I remember watching her this summer, and I thought she has all of the scope in the world and is also just really quiet. She has the ability and the attitude and sometimes that’s really hard to find because normally you can find the quality, but you can’t always find the right attitude. But this mare has it all.”

Capturing another divisional title at CCHS this week, Hunt Tosh and Largesse owned by Ceil Wheeler, were crowned in the Future Hunters 3’3” division. Largesse has steadily improved this season, and Tosh was pleased with his performances so far this week.

“He really only just started this past year in Florida, but he’s gotten so relaxed and easy. He has a beautiful canter and jump and he’s just super careful,” he explained. “He’s come into his own the past few months and just like he did here, continues to ride like a made horse. He’s very simple, and I think he just tries his hardest in every class.”