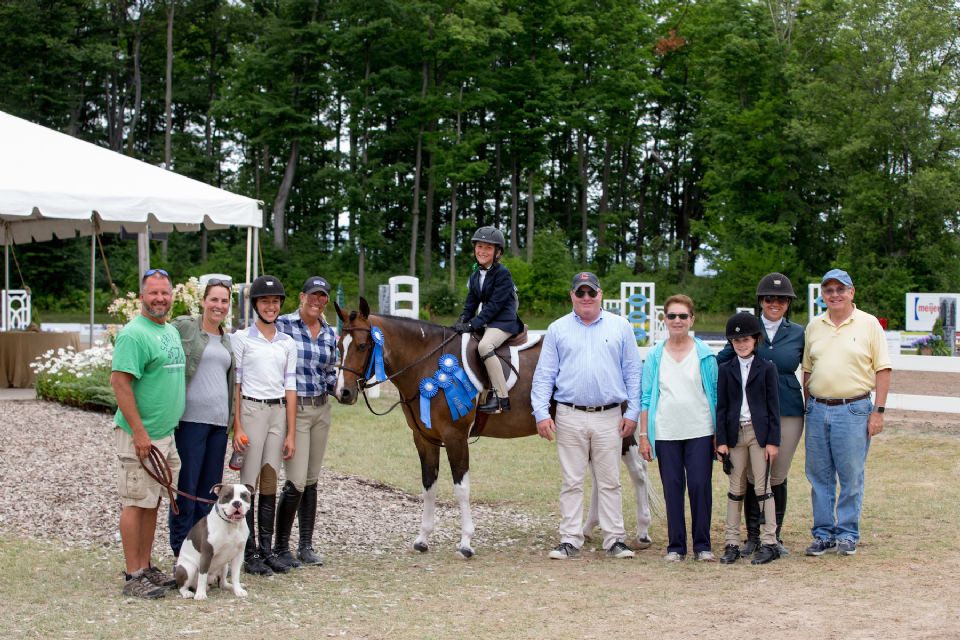 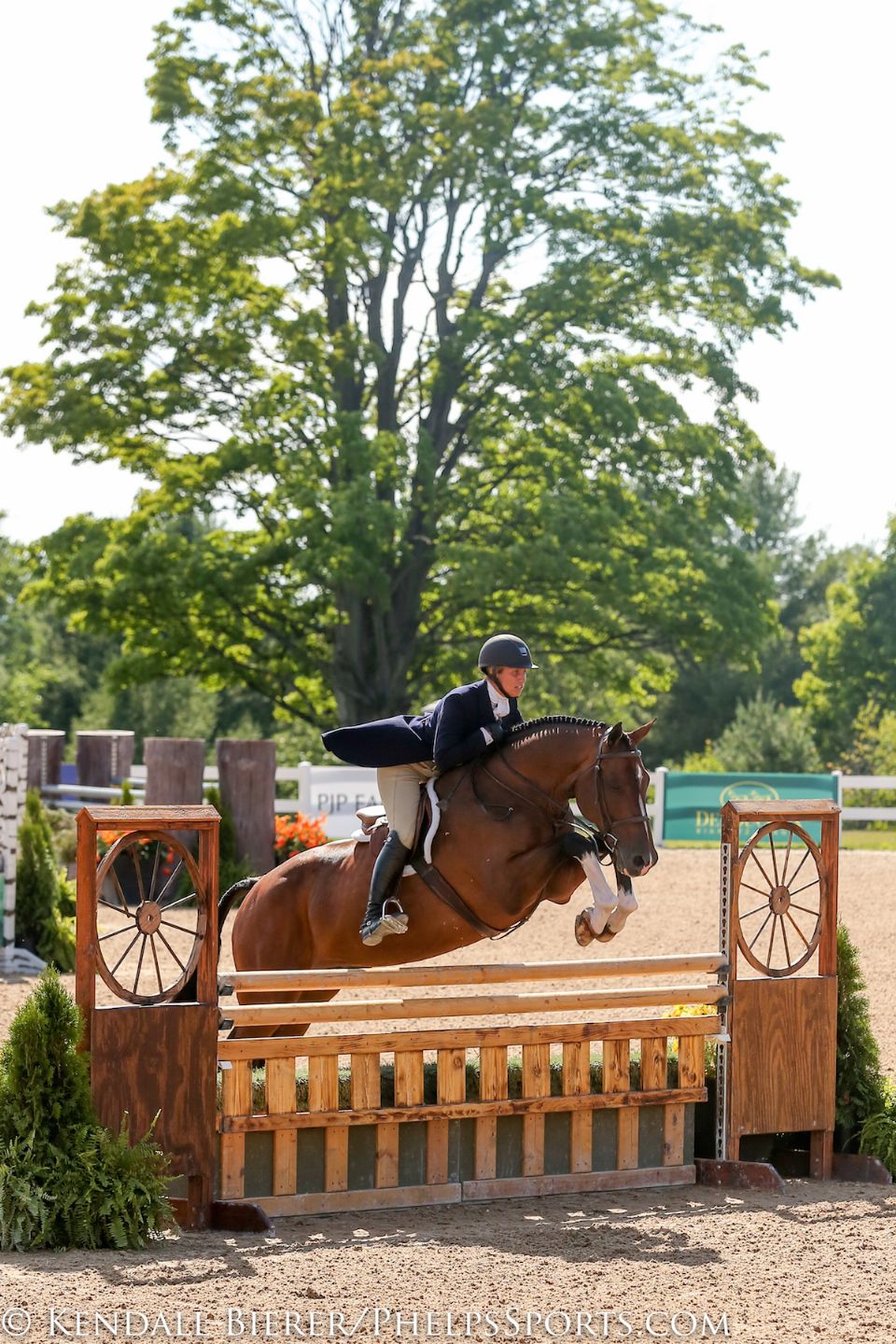 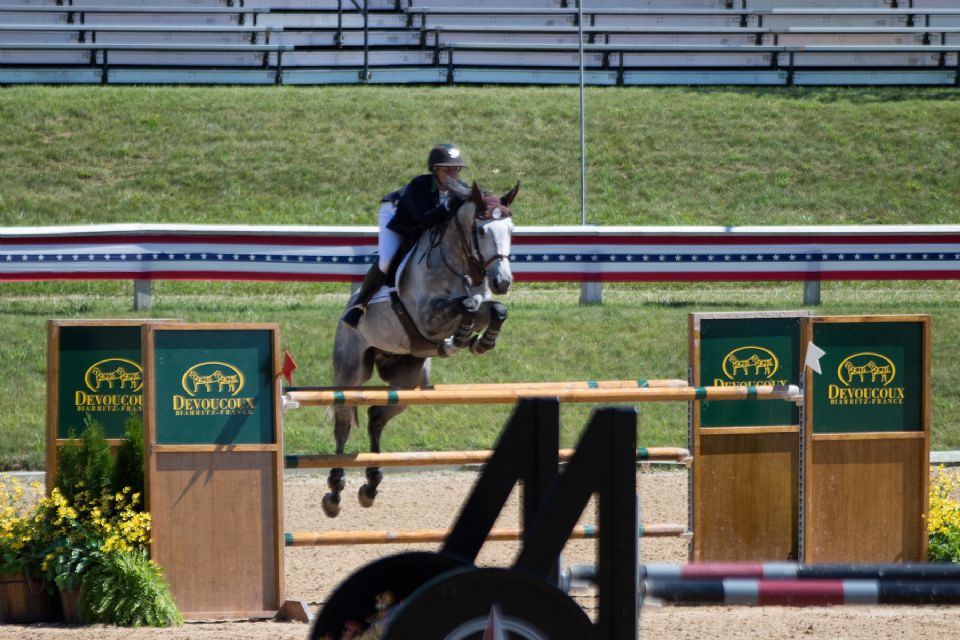 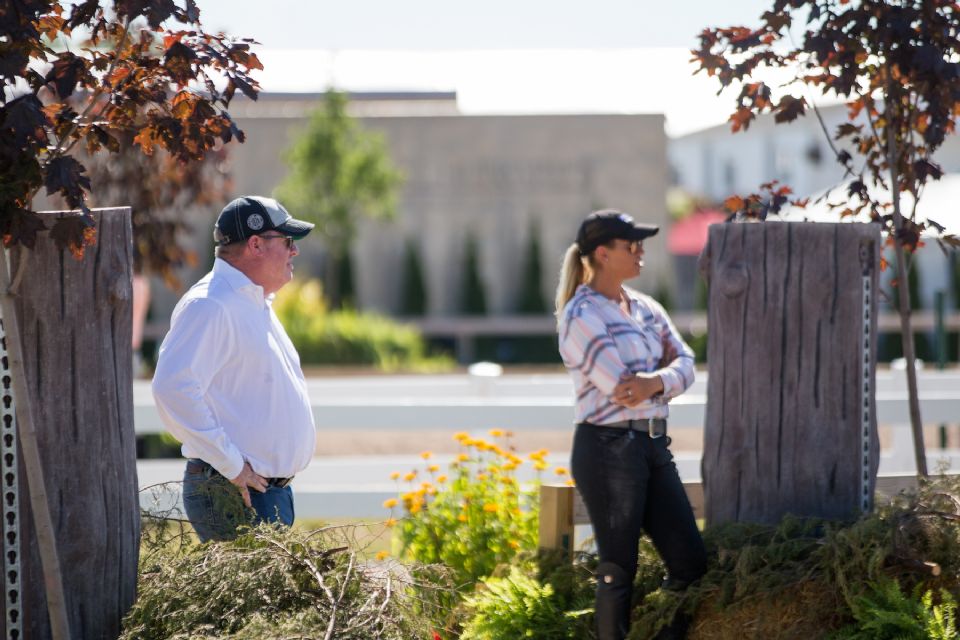 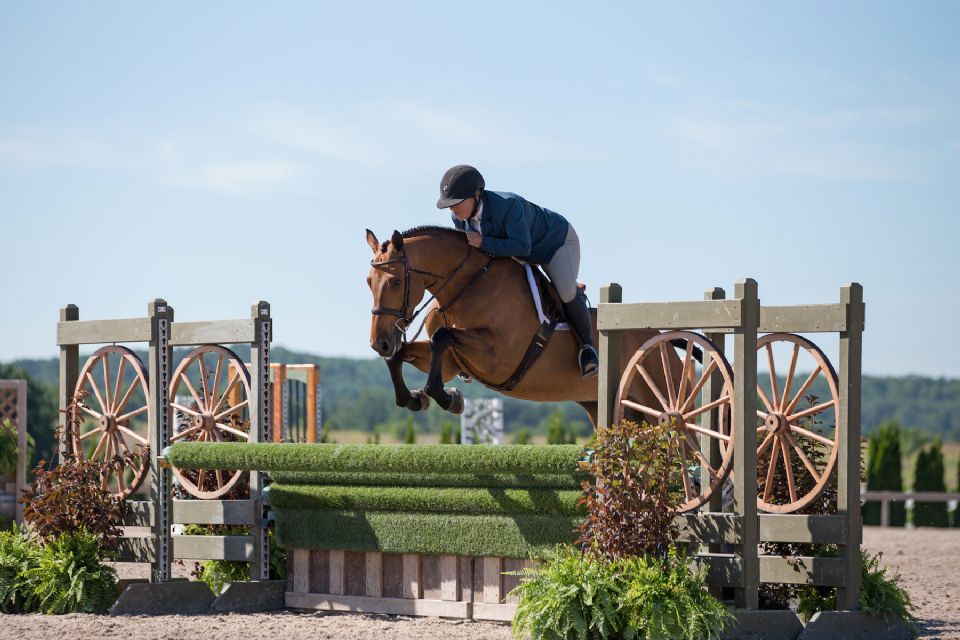 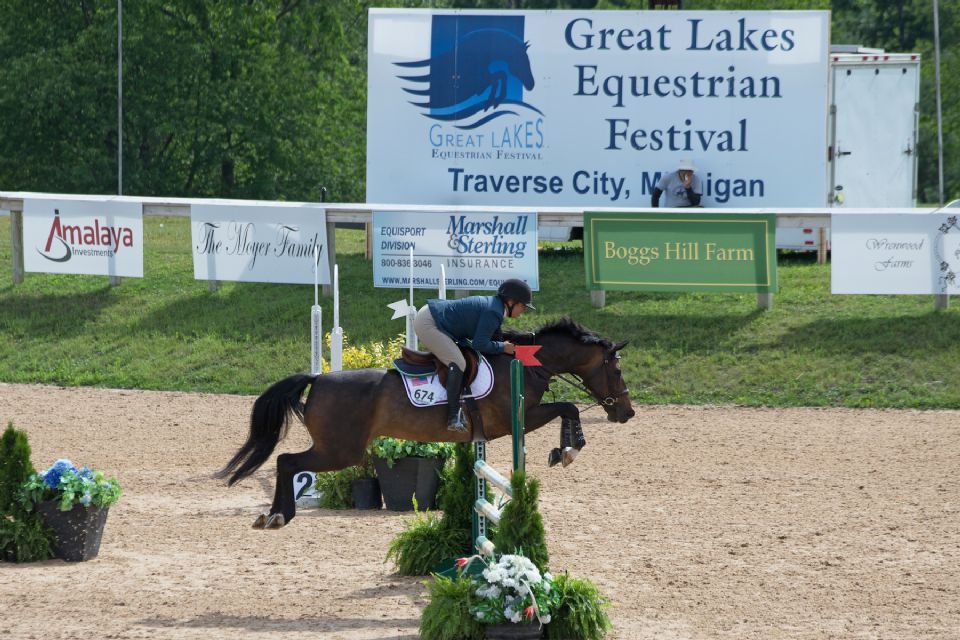 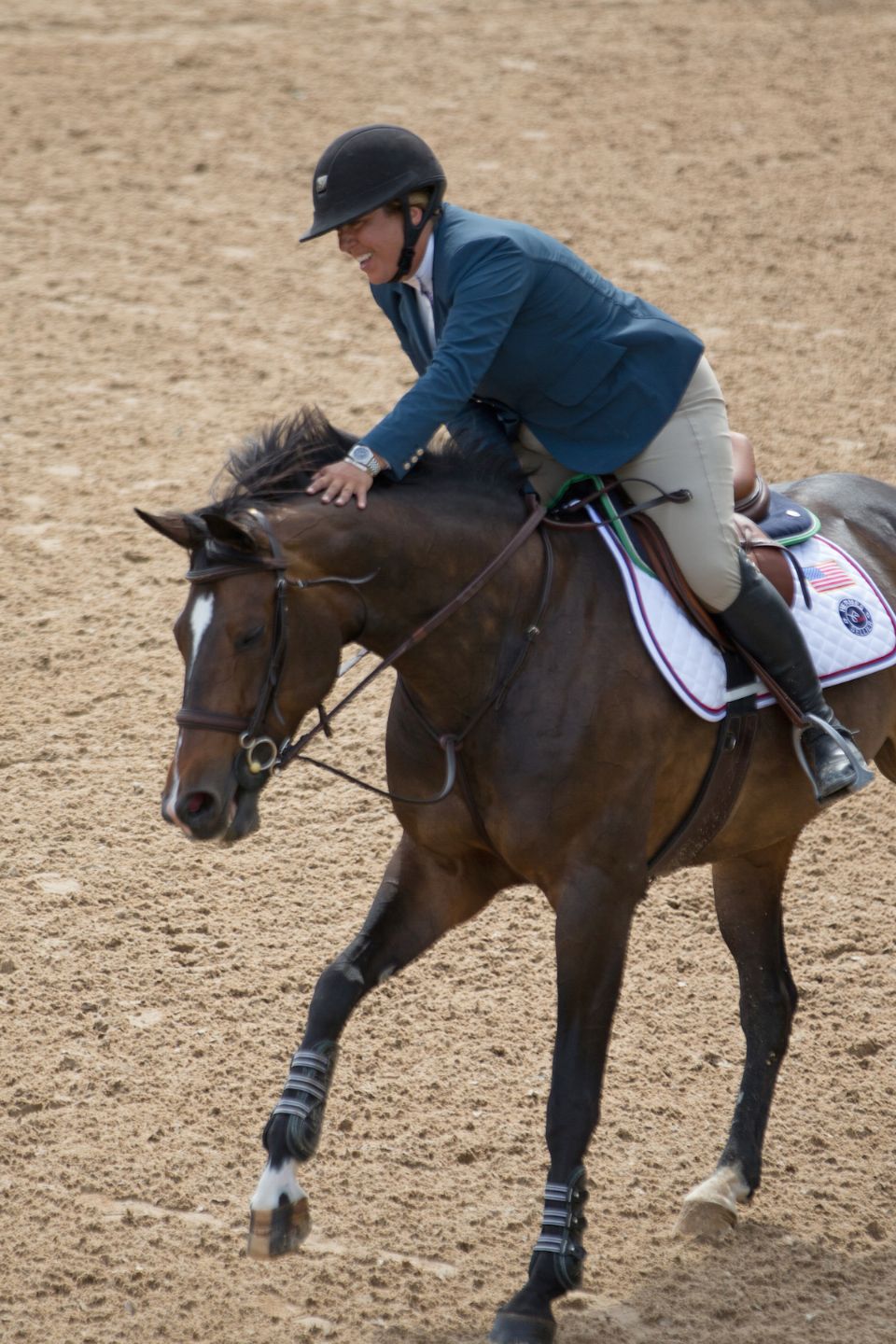 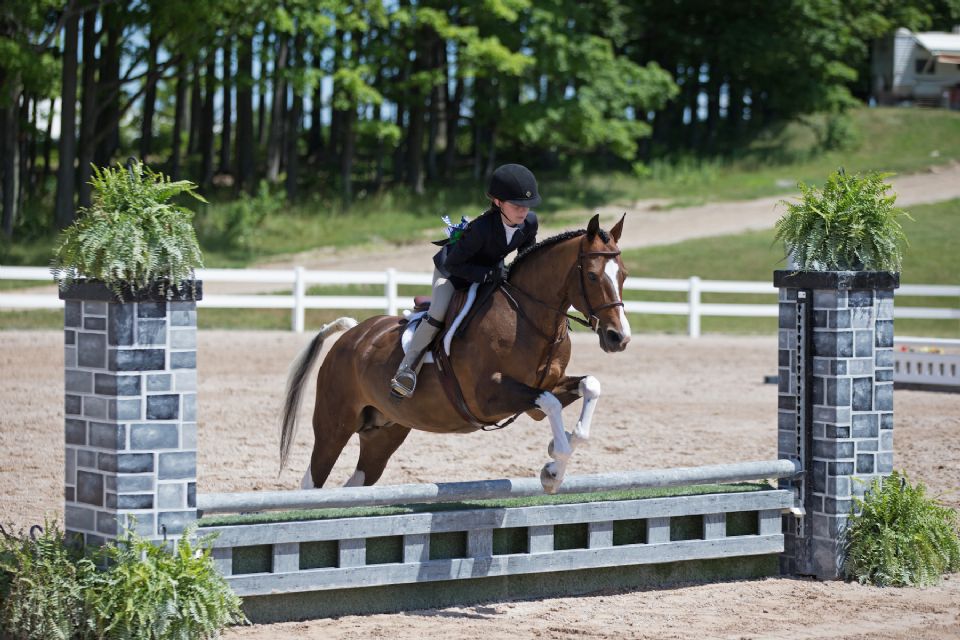 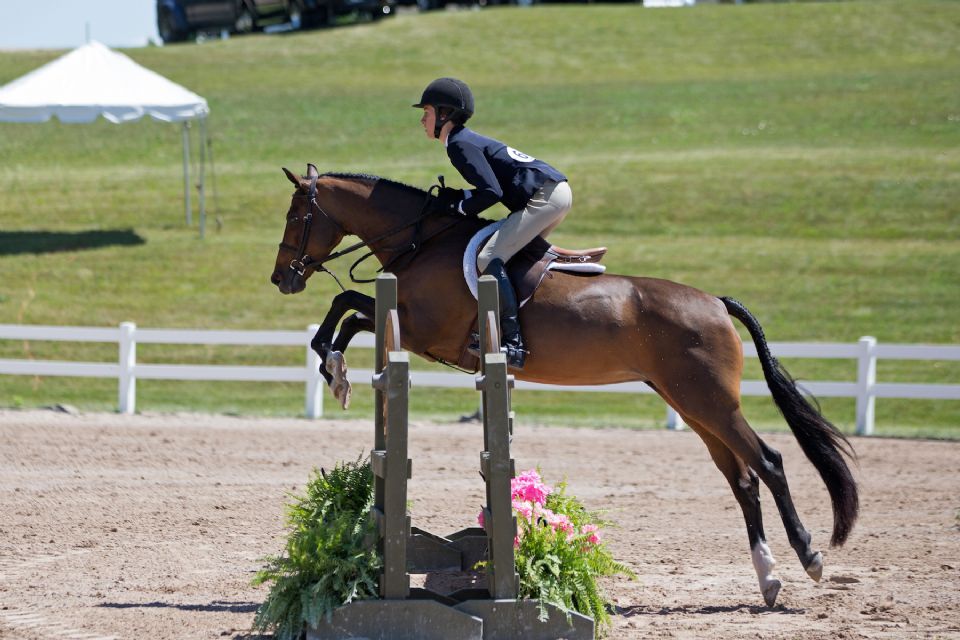 Canterbury Farm is a full-service hunter/jumper training and show facility located in Hampshire, IL. Led by trainers Greg Franklin and Caitlyn Shiels, Canterbury Farm participates and triumphs in both local and nationwide hunter/jumper competitions. The Great Lakes Equestrian Festival is a favorite summer destination for the Canterbury team each year.

The star of GLEF for Canterbury Farm was Cassius, a beautiful seven-year-old Warmblood gelding owned by Don Stewart, that Caitlyn Shiels rode to great success throughout their time in Traverse City. During the first week, Cassius jumped to great ribbons in the Second Year Green Working Hunter division, including a win in the handy round. The next week, the young gelding finished second in the $5,000 National Hunter Derby. In his third week of competition, Cassius earned the Second Year Green Working Hunter championship with two wins and two second-place finishes over fences and a third place under saddle. He then also stepped up to compete in the $25,000 USHJA International Hunter Derby that week and finished 12th overall.

For a young horse that was just starting in the Pre-Green Hunters in May, Cassius has really come into his own this summer and continues to shine.

Shiels detailed, “We brought him home from Ocala to get sold for Don Stewart, and he has been really cool. We brought him to Maffitt Lake, and he was very consistent in the Pre-Green Hunters. Then we decided to play around with him a little bit more at the Spring Spectacular Horse Shows, and we ended up showing him in the International Hunter Derby there. We also jumped the 3’6” Performance Hunters there, and he really stepped up to the plate, and we realized that he might be a lot more than what we originally thought.

“We have just been working on getting him more consistent, doing more handy rounds, and jumping the bigger jumps,” Shiels continued. “His stride is so big, and he is so scopey and smooth. His jump keeps getting better and better every horse show we go to, so he has been a really fun project. The big goal for him is to qualify for derby finals next year.”

A fun addition to her time in Traverse City, Shiels had the help of past trainer and mentor Andre Dignelli of Heritage Farm during the final week of competition. Shiels rode with Dignelli throughout her junior years and went on to win team and individual gold medals at the North American Young Rider Championships under his tutelage. While Greg Franklin was back in Illinois working with other clients, Dignelli stepped in to lend Shiels his guidance once more.

“It was really special for me to be able to work with Andre for the week,” Shiels noted. “He helped me a lot with Cassius in the Second Years. He was also very helpful in the derby. We discussed the consistency of the rhythm, keeping it all very even, and riding up out of the turns. It was like working on the basics from my junior years, which was fun. It was a blast from the past. We worked together for so many years, and we won Young Riders together, and it was great to catch up. I got some of his insight on how I have been doing, and it was really fun.”

Shiels showed her young jumper, Cavalier II, throughout the time at GLEF as well and had great results. The nine-year-old Warmblood gelding (by Whitesnake) jumped in the 1.35m to start and then moved up to the 1.40m classes with a second place finish in the second week.

“He is producing really nicely, and we are really excited about him making that next step,” Shiels stated. “He has been very competitive in the 1.35m and 1.40m classes this summer.”

Along with working on her own riding and developing young horses, Shiels helped coach many of Canterbury Farm’s horses and riders to great ribbons throughout the three weeks in Traverse City.

Michelle Durpetti earned great ribbons in the Amateur-Owner Hunter 3’3” division with her six-year-old Warmblood gelding Lucca during her weeks at GLEF. The pair was very consistent showing against some tough competition in their division.

Durpetti and her nine-year-old Dutch Warmblood mare Serafina (by Verdi) also got a win in the .95m Jumpers during their final week in Michigan, along with other great ribbons in the Low Adult Jumpers.

"Showing at Great Lakes Equestrian Festival is something I look forward to all year long,” Durpetti said of her experience. “The facility is both beautiful and horse-friendly. I loved riding in that field this year! The city itself has some spectacular restaurants, shopping, outdoor experiences and wine. I mean, that is a win-win for everyone!

"I am incredibly proud of what Caitlyn and Greg are continuing to build here at Canterbury,” Durpetti added. “It sets a fantastic example to those of us riding at Canterbury that Caitlyn goes back to Andre Dignelli to continue to grow and learn as a rider. It is immensely inspiring to hear Greg remark on how he was inspired by his time spent with Andre as well. I have had some great opportunities over the last few years to meet, learn, and be inspired by some really well-respected and accomplished riders because of the constant commitment that Caitlyn and Greg have to continue their own education. That is one of the best things that separates their program from other programs in the area, and it is something I am really proud of."

Another great pair at GLEF includes Madeline Pogorzelski’s Pumpkin Pie and Greg Franklin’s niece, Molly Zygmont, who had fantastic results during their time at the competition. The pair earned the Children’s Small/Medium Pony Hunter Championship two weeks in a row and finished as reserve circuit champions in the division. Pumpkin Pie and Zygmont also showed in the Equitation 11 & Under division with a championship win in their second week of competition. The steadfast pony then carried Samantha Pogorzelski to blue ribbons in the Opportunity Walk, Trot classes as well.

Madeline Pogorzelski showed Canterbury Farm’s Hillcrest Songbird in the Large Pony Hunters throughout GLEF competition and is now headed to the USEF Pony Finals to represent Canterbury Farm with the best in the country. The young rider also showed Marcia Franklin’s Cydelle to solid ribbons in the Children’s Hunter Horse 14 & Under.

The horses and riders of Canterbury Farm compete next at the Equifest II and III competitions at the Lamplight Equestrian Center in Wayne, IL.

About Canterbury Farm
Canterbury Farm maintains a horse show schedule on a local, regional, and national level that is created with their customer’s competitive goals in mind. For over 35 years, Greg Franklin has ridden hunters and jumpers to numerous championships nationally and has brought home numerous Zone 5 ‘Horse of the Year’ awards. Franklin has qualified horses and riders for the Pennsylvania National, Washington International and the National Horse Shows including the Medal and Maclay Finals. He has also shown internationally at Canada’s Spruce Meadows in the 1.40m and 1.45m divisions and is a certified trainer with USHJA. Additionally, Franklin holds his ‘R’ card in Hunters, Hunter Seat Equitation, and Jumpers, and judges throughout the country.

Born and raised in Sheffield, Massachusetts, Caitlyn Shiels began riding at the age of eight. A highlight of Shiels’ early career was being a team and individual gold medalist at the 2004 North American Young Riders’ Championship. Shiels went on to apprentice under such professionals as Andre Dignelli, Mclain Ward, Ken Smith and Kate Stoffel-Oliver. Almost immediately after she joined the Canterbury team in 2013, Shiels and Franklin both began earning championships at major shows. Their partnership is an excellent balance of training both on the horse and from the ground.