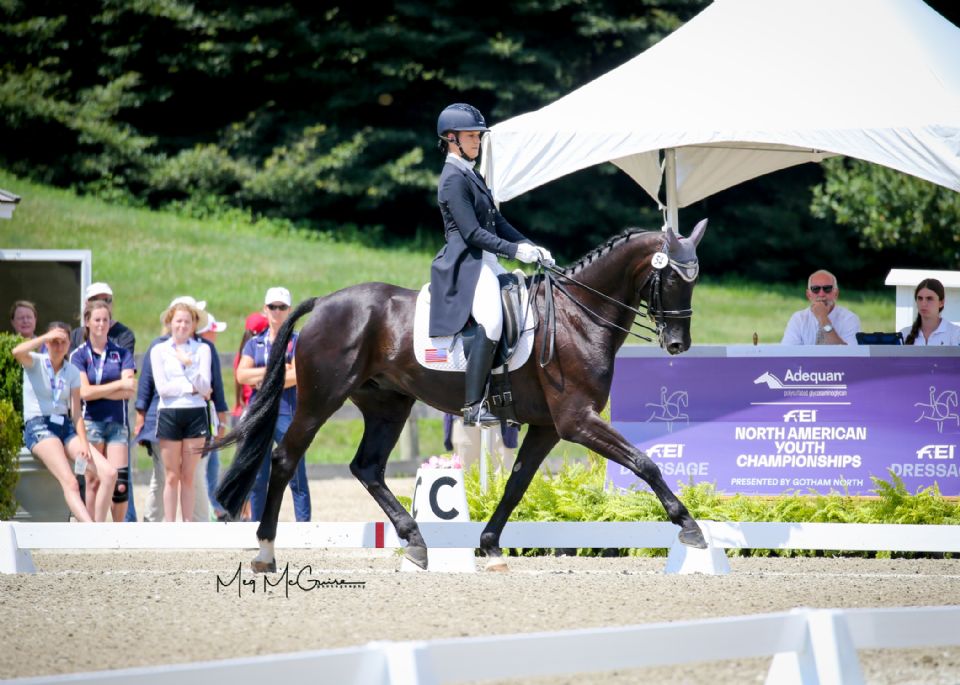 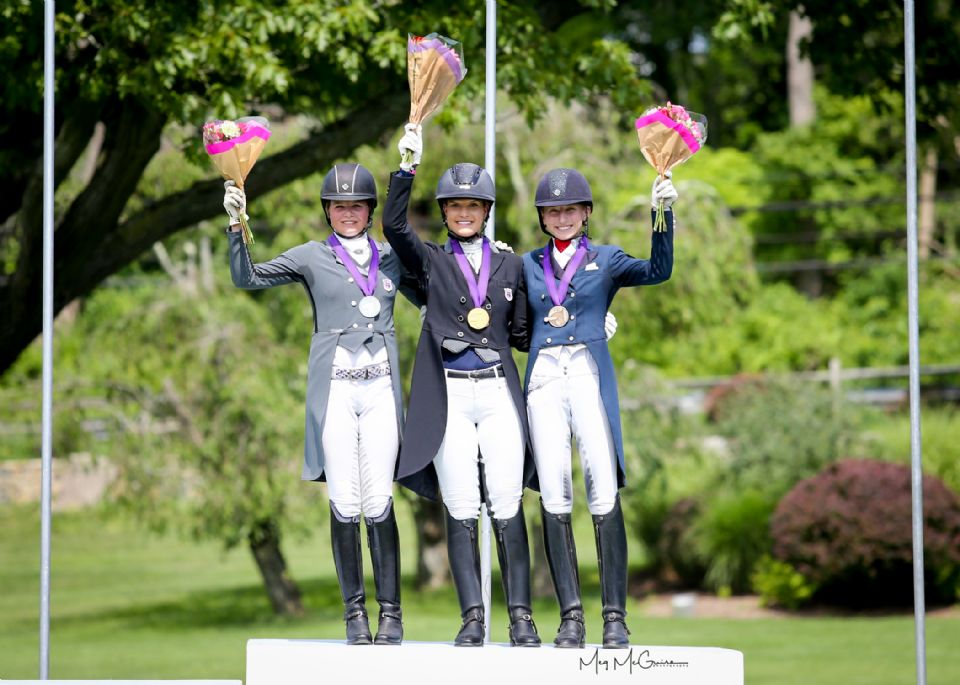 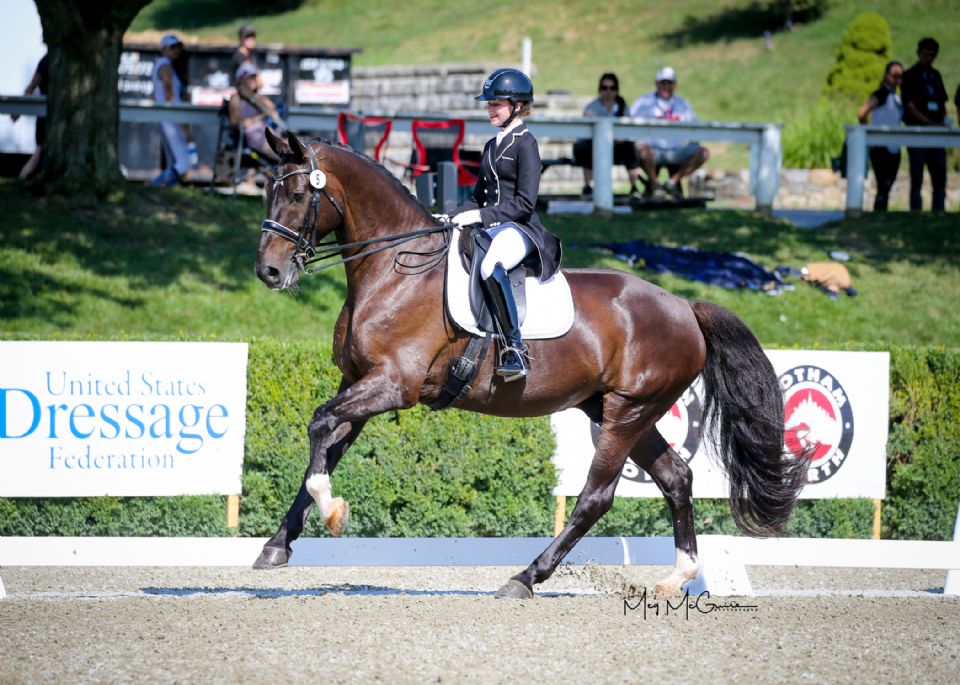 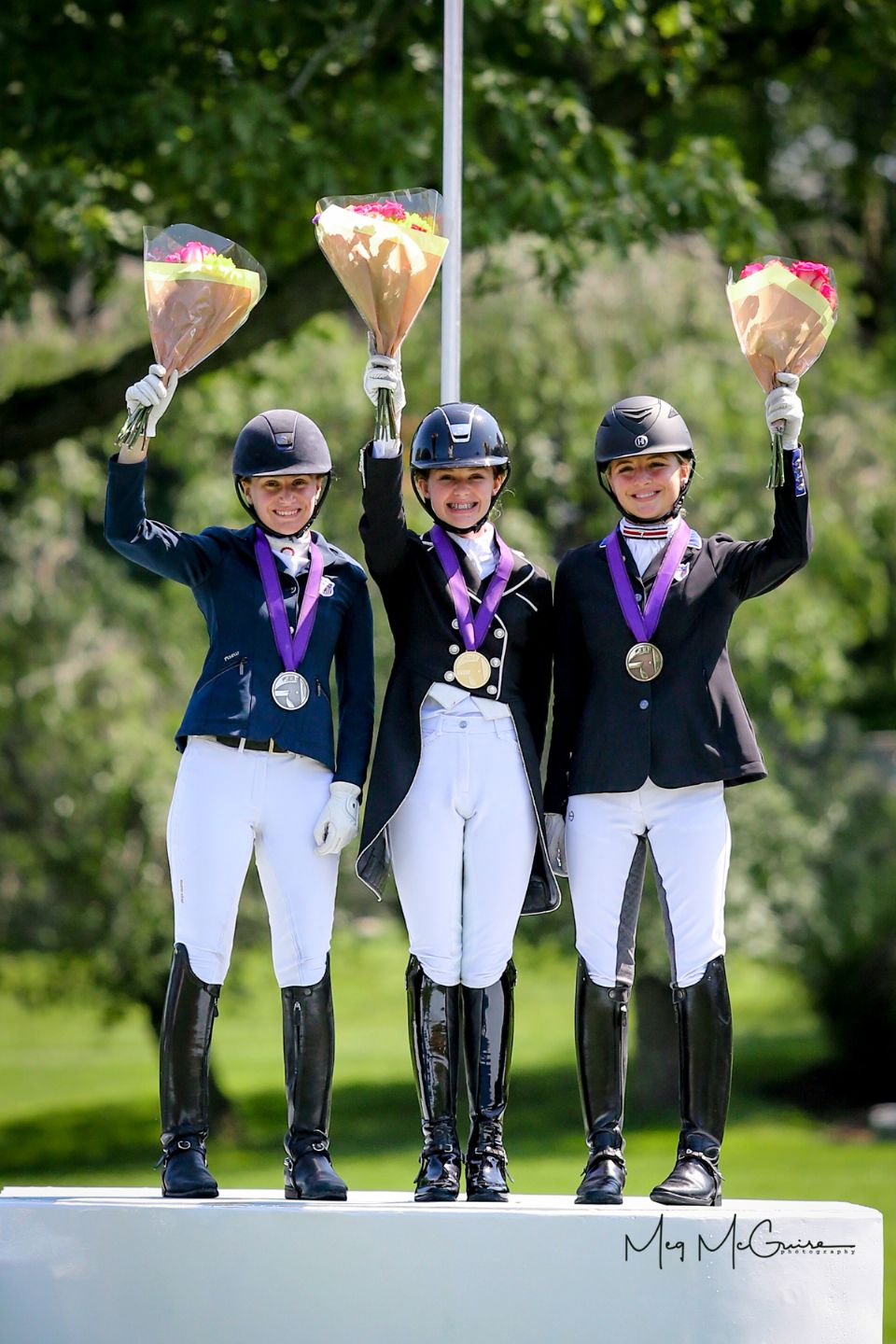 “It’s truly just a bittersweet moment because I’m aging out and that’s the last time I’m going to do that freestyle,” said Jones, who choreographed and worked on the music with Cynthia Thomas. “I’m just really happy and so proud of my horse because he gave me his all this week.”

While they won the bronze medal in the Freestyle in 2018, Jones chose not to adjust her choreography, instead focusing on improving each movement.

“I debated changing it, but I ended up not,” she explained. “I think because I learn so much from doing this freestyle each time. I just always strive to do better. The choreography is not the most difficult, but I know if I can nail each move, then I’m going to be rewarded for it. I always have so much fun riding it and love the music.”

The silver medal in the Young Rider Freestyle went to Kayla Kadlubek (19, Fairfax Station, Va., a member of the Discover Dressage™ USEF/USDF Emerging Athlete Program) on Perfect Step, her 18-year-old Hanoverian gelding. They received a score of 73.505 percent. The pair also won the bronze medal in the Individual Championship this week and helped USDF Region 1 to the team gold medal.

“I was extremely happy with my test today,” said Kadlubek, who designed the choreography and picked the music herself. “There were still a couple bobbles in there, but he was so much more energetic today. I went in there with the mindset of, ‘I’m just going to have fun and go for it.’ This freestyle means so much to me. I made it myself and it’s from ‘The Greatest Showman.’ The lyrics mean so much to me. I love riding it. He was just on fire today. I couldn’t be happier with him.”

Adding a bronze along with her two previous silver medals to her medal haul this week, Vanessa Creech-Terauds (19, Caistor Centre, Ontario) rode Fleur de Lis, Louise Leatherdale’s 10-year-old mare to the podium with a 73.490 percent.

“Up until this year, I’ve actually taken a different horse to the championships every year,” said Creech-Terauds, who was competing at her fifth NAYC. “This is my first time taking the same horse. This championship is always one of the best weeks of the year, so I just really look forward to it. This year, having taken Fleur for the second time, this time in the Young Riders, I was extremely motivated. I’m so proud and happy to say that she exceeded my expectations.”

Klepper (14, McCutchenville, Ohio) performed a borrowed Freestyle from fellow barn mate Patty Keene, who coached her on the test leading up to the NAYC. This was the first time Klepper performed this Freestyle, and she made it count with the 12-year-old Oldenburg gelding owned by Shannon Klepper.

“I’m really proud of my horse and how well he was with me today. He saved me a couple of times, especially on the changes,” said Klepper, who is the first junior NAYC competitor to win double individual gold since Jenna Upchurch (USDF Region 4) did so in at the 2016 NAYC. “I’m happy with my test today and thankful to Patty and everyone who has helped me with this Freestyle to polish and nail it down.”

Dupell (17, Wilsonville, Ore.) and Fiderprinz had only been working together for six months prior to the 2018 NAYC. Although they gained experience, they left without a medal. The situation was much different this year as her growth with the 10-year-old Oldenburg gelding contributed to their podium advancement.

“It’s awesome to finally stand [on the podium]. Last year, we had some bobbles, and today we did, too, but he covered me a lot,” said Dupell. “It was the first time performing this Freestyle, and it really suits him. We tried to keep it simple and him happy and supple throughout the work.”

Rogers (16, Thousand Oaks, Calif.) and the 14-year-old Danish Warmblood mare owned by Dorriah Rogers will head back west with two medals in their first NAYC appearance, having earned the silver medal in Friday’s Individual Test.

Both Dupell and Klepper will look to add to their achievements when they compete at the 2019 U.S. Dressage Festival of Champions later this month.

The NAYC organizing committee recognized three athletes, one horse, and a chef d’equipe with special dressage awards on Sunday. They include:

The Dressage Style Award is presented to the rider that has shown “style” throughout the competition, not only when mounted, but also in the form of manners and overall demeanor. The panel of judges that voted on the winners included Ground Juries from both disciplines, veterinarians, Technical Delegates, FEI Stewards, Appeals Committee, and the NAYC Organizing Committee.

The Albers Award is presented annually to the dressage Chef d’ Equipe, named in honor of long time Region 1 Chef d’Equipe, supporter and good friend, Patsy Albers, who best demonstrates the same level of dedication, enthusiasm and team spirit that Patsy has shown throughout the years. This award is open to all of the dressage Chefs d’ Equipe to be nominated by fellow Chefs d'Equipe by submitting a written explanation as to why that chef deserves to win the Albers Award.

The Fiona Baan Memorial Trophy is awarded to the Young Rider in the championships who receives the highest combined average percentage score from the Team, Individual and Freestyle dressage rides. The award is to honor a remarkable woman who dedicated more than 30 years of her life to the United States Equestrian Team and the Young Riders Championships. This award recognizes hard work and the pursuit of excellence in the sport Fiona dearly loved.

Started in 2011, the HorsePower Trophy is given to the horse that stands out from their peers at the NAYC. This award recognizes an outstanding horse, from any of the championship disciplines, who best demonstrates determination, courage, class, heart and the ability to inspire athletes and spectators alike throughout the competition.

Each year at NAYC, the Captain Andrew B. de Szinay Memorial Sportsman Trophy is given to the athlete across all disciplines who best personifies the high standards and virtues of integrity, sportsmanship, honor, courage, team spirit, good temper and unselfishness. This award is presented annually by the U.S. Equestrian Federation in honor of Captain Andrew B. de Szinay who was a teacher, dressage judge, technical delegate and long-time supporter of the Young Rider’s program. His dedication and support has helped the championships become what it is today.