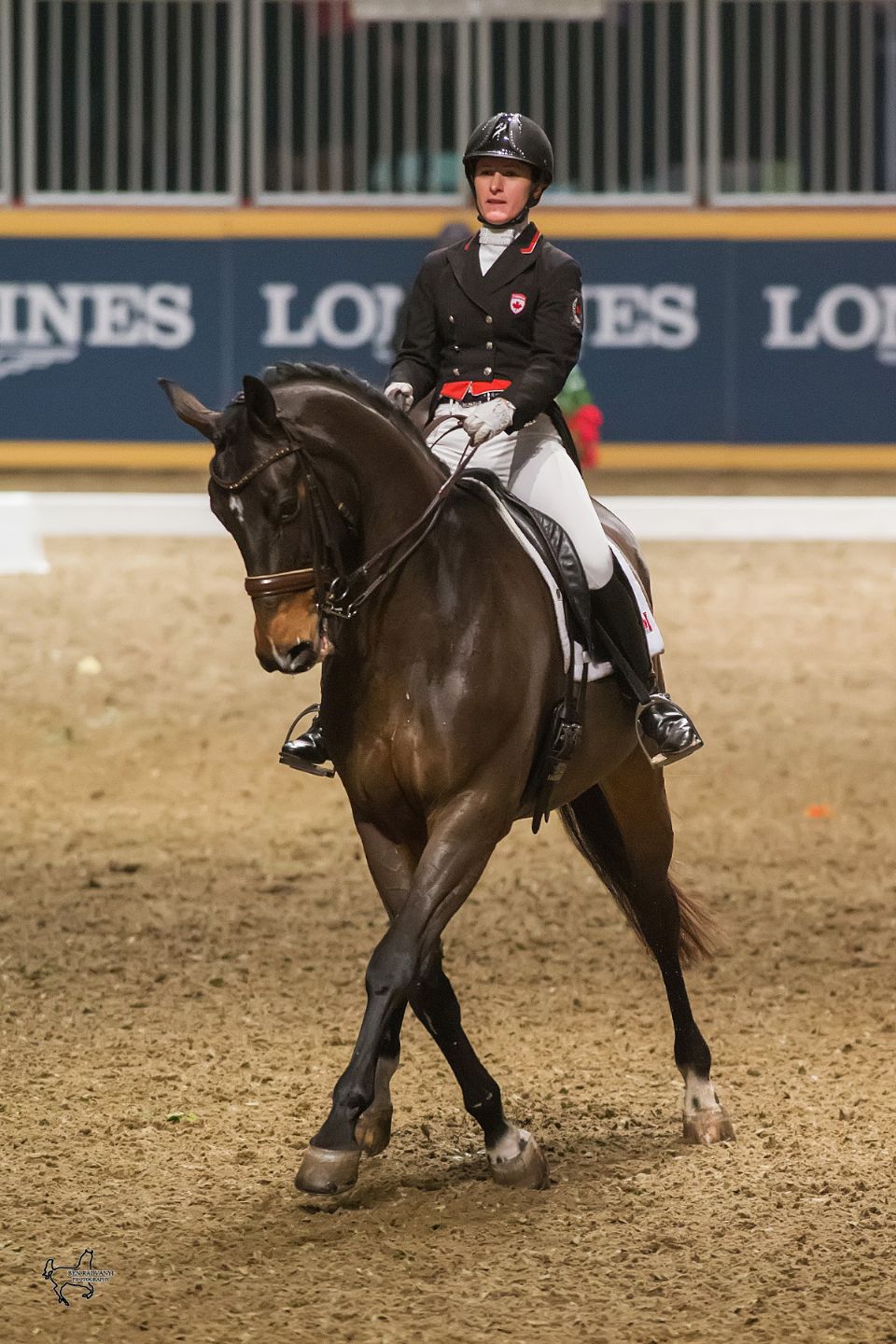 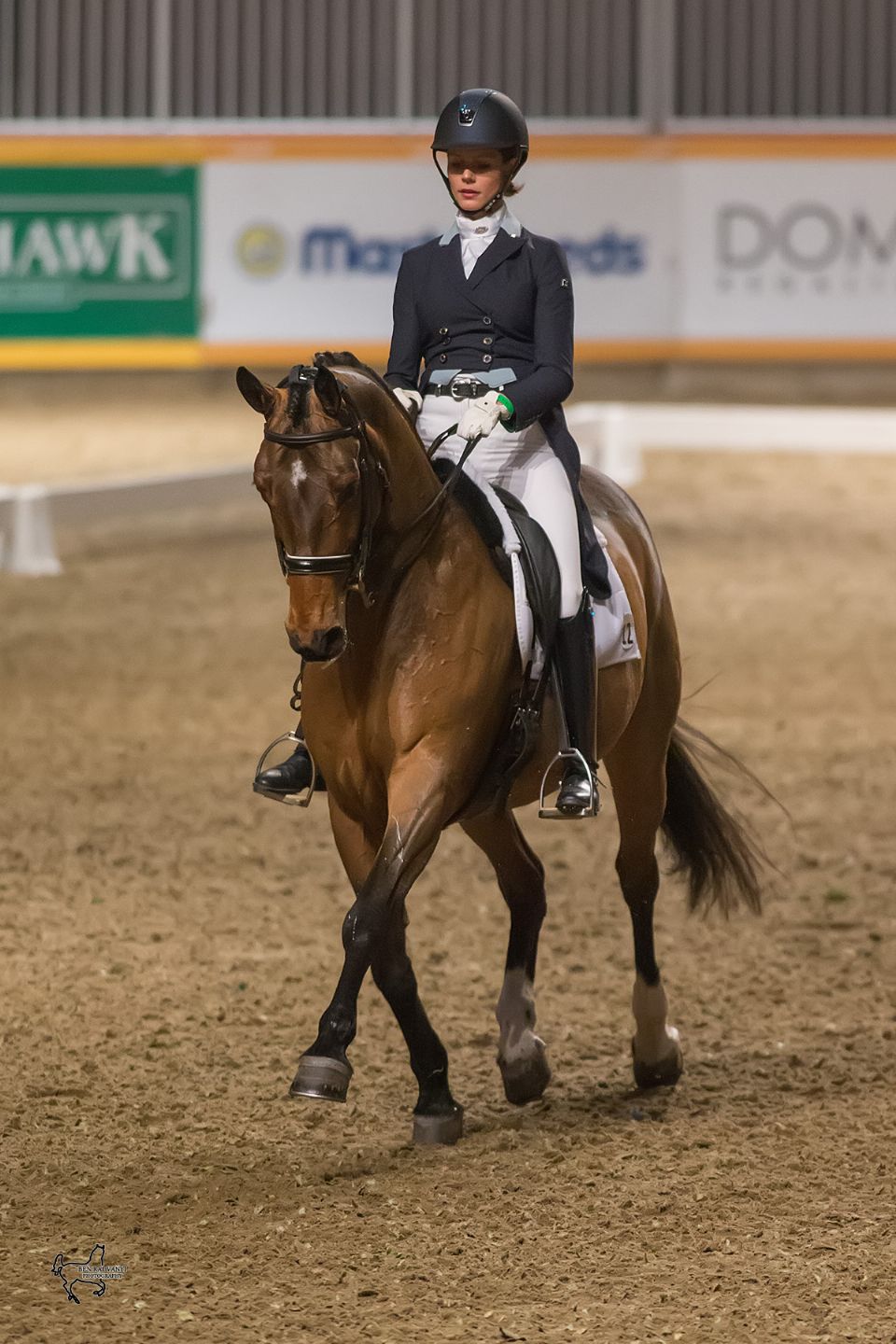 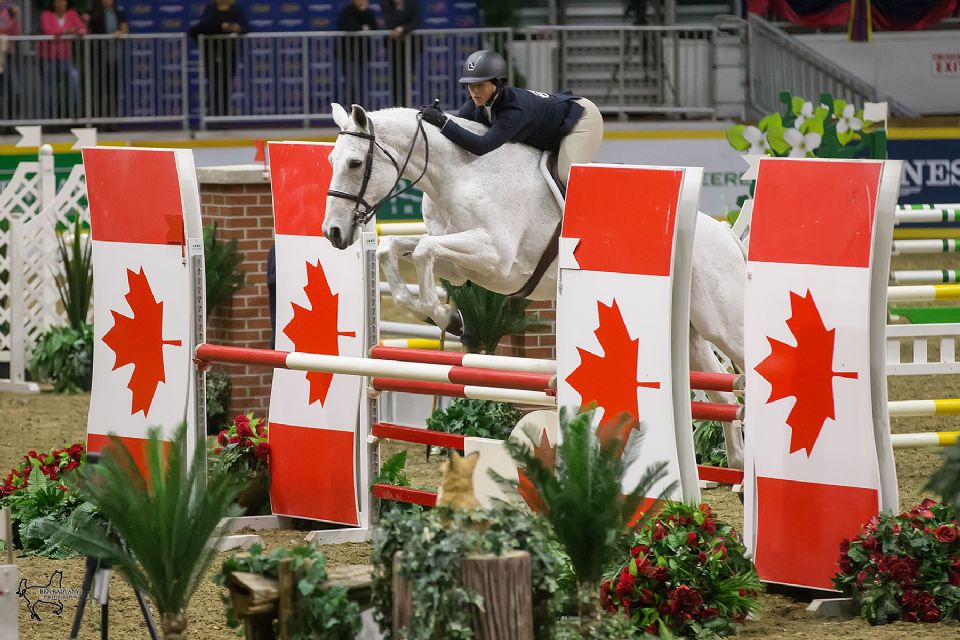 Kassidy Keith of Duncan, BC, scored an overall victory in the 2015 CET National Medal Finals on Thursday, November 12 at the 2015 Royal Horse Show®.
Photo by Ben Radvanyi Photography 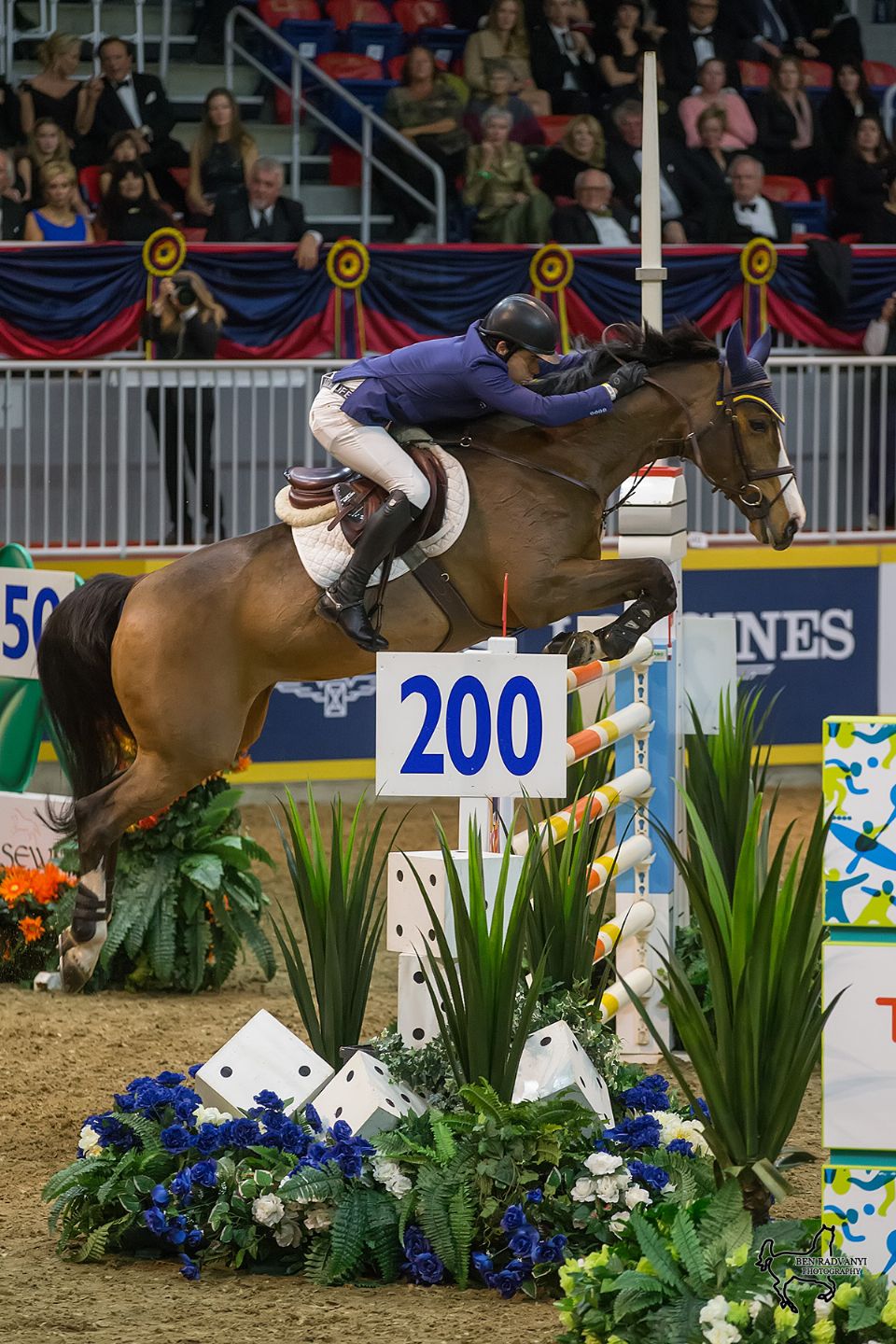 Belinda Trussell of Stouffville, ON, won the $20,000 Royal Invitational Dressage Cup, presented by Butternut Ridge, on Thursday night, November 12, at the Royal Horse Show®, held as part of The Royal Agricultural Winter Fair in downtown Toronto, ON.

Hot off a team silver medal appearance at the TORONTO 2015 Pan American Games in July, Trussell and Anton returned to the competition arena to win in front of a home crowd. With a technical program highlighted by a difficult one-handed piaffe-pirouette, the pair earned the top score of 77% from a panel of international judges to earn the title.

“Anton was great!” said Trussell of the 15-year-old German-bred gelding owned by her mother, Robyn Eames, and her husband, Mark Trussell. “He was very electric, but he was with me. It was so much fun!”

Having competed in front of a hometown crowd at the Pan American Games, Trussell was thrilled to once again perform in Toronto. It also marked her second appearance at the Royal Horse Show®, having last competed in 2003 with Royan.

“I always want to win, and I really wanted to support the sport of dressage at The Royal,” said Trussell, 44. “Being a medalist and being in front of a home crowd was important to me, and it felt really great!”

Trussell was especially thrilled to be riding Anton, as the horse has returned to the sport following a two and a half year break due to a bone lesion. She explained, “My veterinarian, Dr. Usha Knabe, brought him back for me. He is better than ever! At 15, he is reaching his prime.”

As the winner, Trussell was presented with the Butternut Ridge Trophy, generously sponsored by Deborah Kinzinger Miculinic.

“To have Deb Kinzinger and Butternut Ridge supporting our sport is huge,” said Trussell, who is now aiming for a berth at the 2016 Rio Olympics with Anton. “They are making it exciting for us to come and compete.”

Leah Wilkins, 28, of Amaranth, ON, impressed in her Royal Invitational Cup debut, and used powerful and dramatic music to highlight her Freestyle performance. Riding Fabian J.S., a 16-year-old Hanoverian gelding owned by Maria Simpson, Wilkins earned a score of 73.375% to finish as the runner-up. Canadian Olympian and 2013 Royal Invitational Cup competitor David Marcus flew in from Wellington, FL, to coach Wilkins at the Royal Horse Show®.

Crowd favourite Jacqueline Brooks of Mount Albert, ON, thrilled the audience with a moving freestyle performance aboard her 2012 Olympic Games partner, D Niro. Owned by Mary Brooks and Brookhaven Dressage Inc., D Niro is a 16-year-old grey Swedish Warmblood gelding. Brooks, who has been competing at the Royal Horse Show® since dressage was first introduced, finished third on this occasion with a final score of 73.208%.

Rounding out the top four was yet another Canadian Olympian, Evi Strasser of St. Adele, QC. With a freestyle test highlighted by floating, expressive trot work, Strasser earned a final score of 70.667% riding Renaissance Tyme. The 12-year-old grey Oldenburg gelding recently made headlines when reigning Olympic and World Champion Charlotte Dujardin of Great Britain rode him during a dressage demonstration at the Central Park Horse Show in September.

Equitation was also on the agenda at the Royal Horse Show® as the CET Medal Final, presented by Running Fox, took center stage on Thursday afternoon. Having claimed the Jump Canada Medal Final on Tuesday, November 10, Kassidy Keith of Duncan, BC, returned to the Ricoh Coliseum to dominate the 2015 CET Medal Final. Keith was sitting second following the opening flat and gymnastic phase held Wednesday before topping the final jumping phase on Thursday afternoon. She piloted Wallabee, owned by Jolene Benham, to the top jumping phase score of 89 awarded by judges William Ellis of Ocala, FL, and Mike Rosser of Southern Pines, NC. The top four riders were then called back for additional testing where Keith impressed yet again to claim the national title. Arora Peters of Aldergrove, BC, finished as the runner-up, Briana Ballard of St. Lazare, QC, took third, and Megan Champoux of Aldergrove, BC, rounded out the top four.

To cap off the evening, Ireland’s Conor Swail executed the best course to take the win in the $35,000 International Jumper Top Score Challenge. Riders formulated their own plan, earning points for each obstacle successfully cleared before deciding whether to jump the joker fence for an additional 200 points. Riding Ariana, a 14-year-old Dutch Warmblood mare owned by Susan Grange of Cheltenham, ON, Swail successfully cleared the joker to earn a total of 1230 points and take his second victory of the week in the international division.