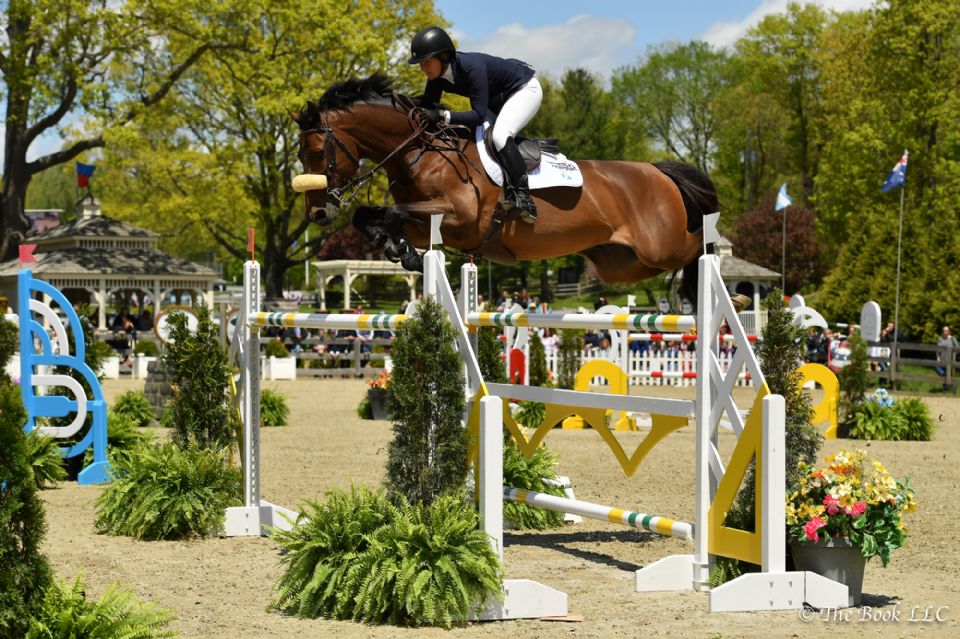 Beezie Madden and Breitling LS won the $50,000 Old Salem Farm Grand Prix, presented by The Kincade Group, on Sunday, May 14, during the 2017 Old Salem Farm Spring Horse Shows at Old Salem Farm in North Salem, NY.
Photo by The Book 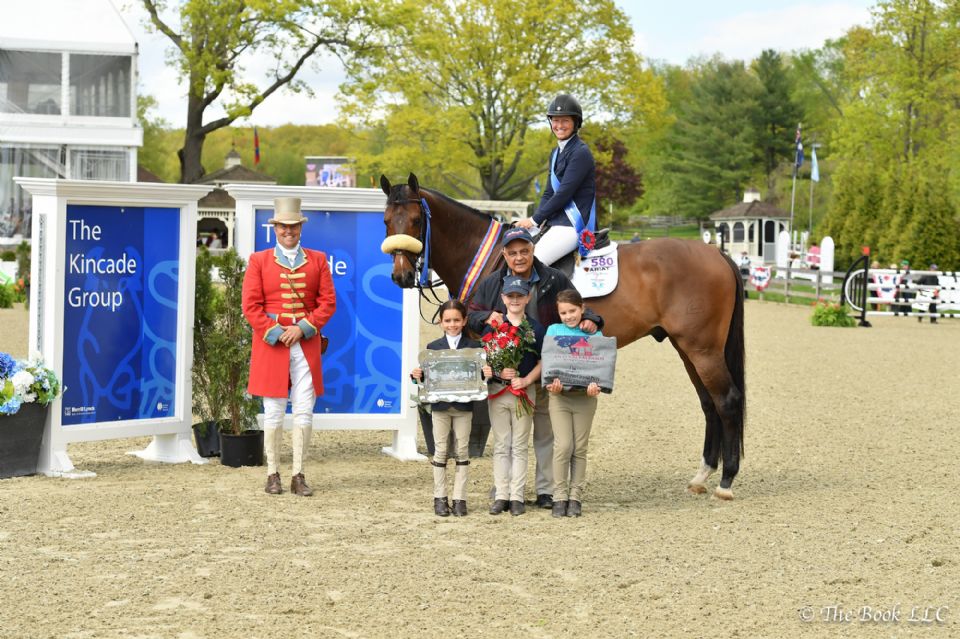 Beezie Madden and Breitling LS are presented as winners of the $50,000 Old Salem Farm Grand Prix, presented by The Kincade Group, by ringmaster Alan Keeley (left) and Kamran Hakim (right) of Old Salem Farm on Sunday, May 14, during the 2017 Old Salem Farm Spring Horse Shows at Old Salem Farm in North Salem, NY.
Photo by The Book 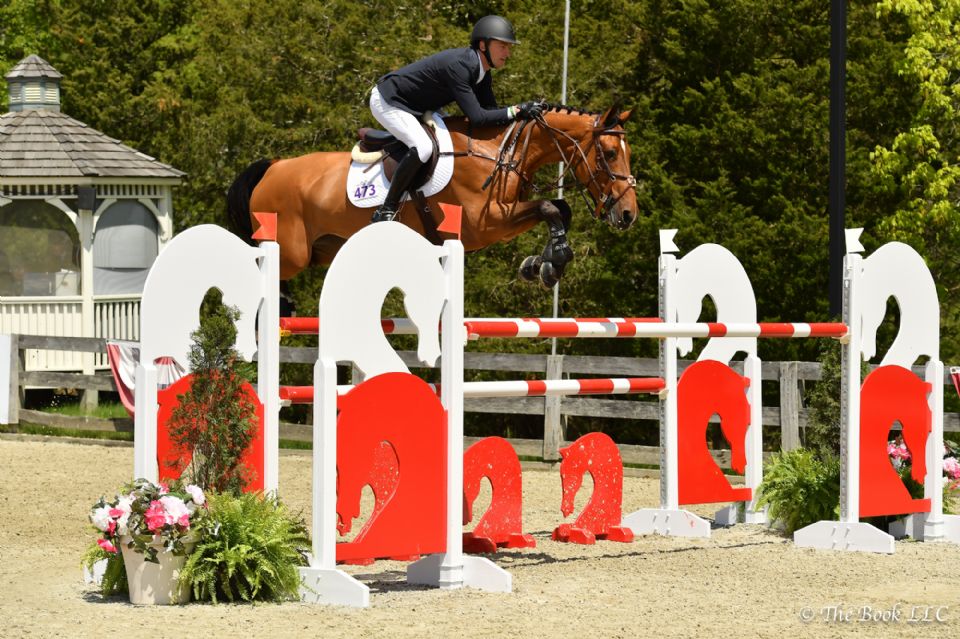 Andrew Ramsay and Cocq a Doodle took second place in the $50,000 Old Salem Farm Grand Prix, presented by The Kincade Group, on Sunday, May 14, during the 2017 Old Salem Farm Spring Horse Shows at Old Salem Farm in North Salem, NY.
Photo by The Book 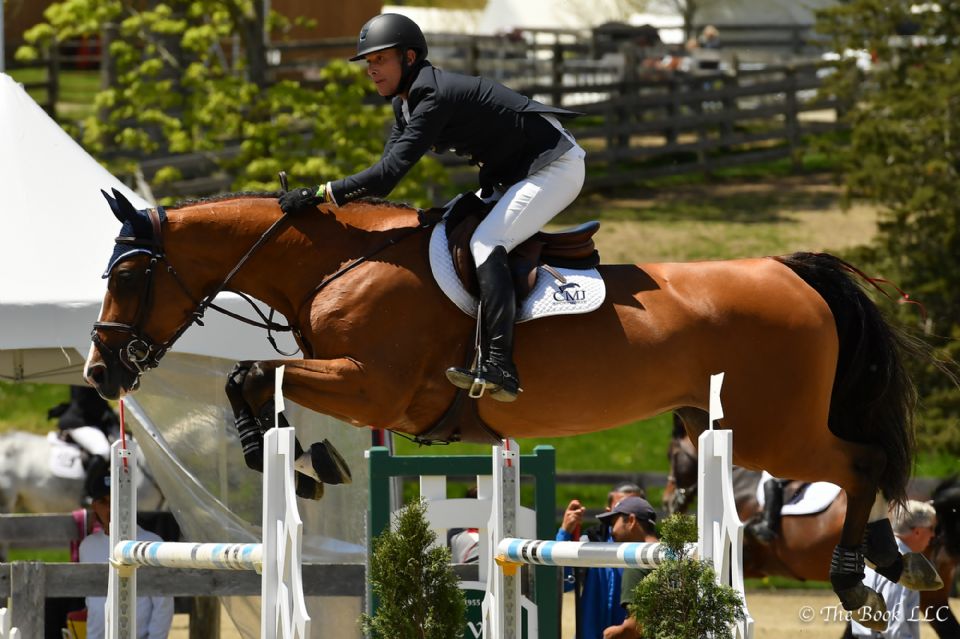 Charlie Jacobs and Cassinja S were third in the $50,000 Old Salem Farm Grand Prix, presented by The Kincade Group, on Sunday, May 14, during the 2017 Old Salem Farm Spring Horse Shows at Old Salem Farm in North Salem, NY.
Photo by The Book 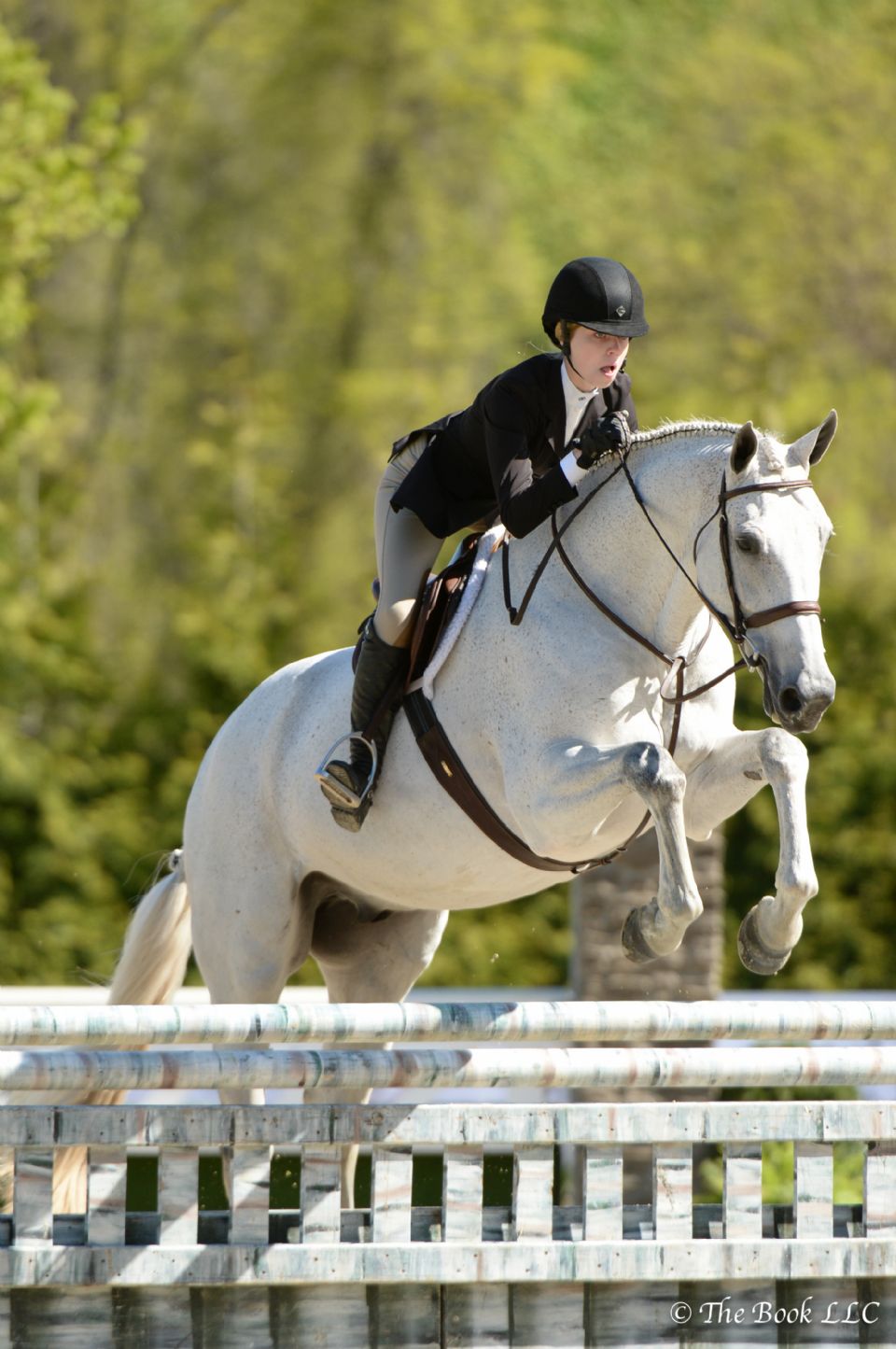 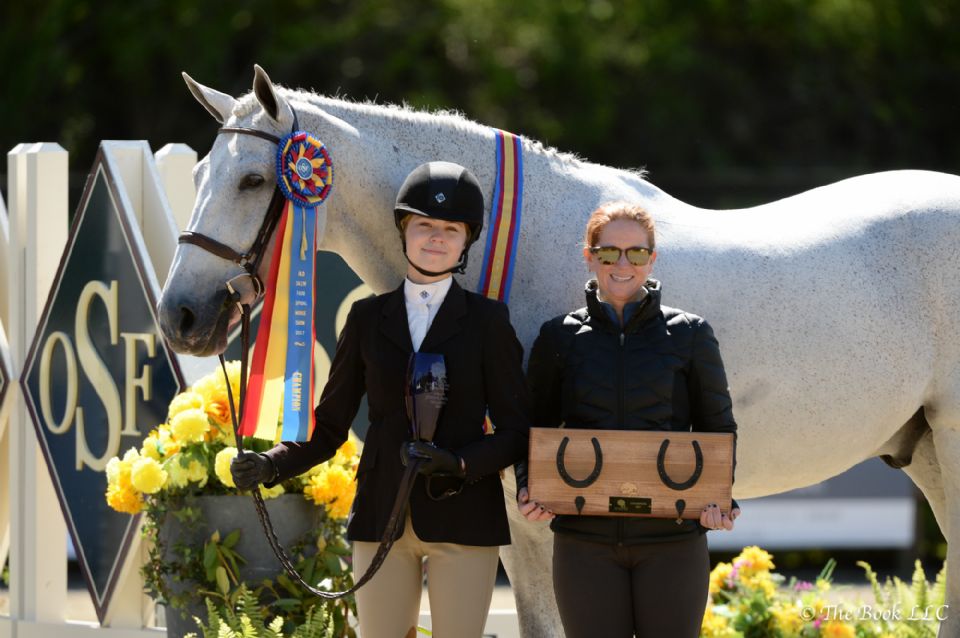 Aubrienne Krysiewicz-Bell Early Winter, pictured with trainer Dottie Areson of Heritage Farm, were champions in the Large Junior Hunter 16-17 Division, and earned the Grand Junior Hunter Championship on Sunday, May 14, during the 2017 Old Salem Farm Spring Horse Shows at Old Salem Farm in North Salem, NY.
Photo by The Book

Madden, who hails from Cazenovia, NY, bested a field of 48 horses for the win over a course designed by Ken Krome of Westminster, MD. Riding Breitling LS, an 11-year old Dutch Warmblood stallion (Quintero x Accord II) owned by Abigail Wexner, Madden was third to return in a ten-horse jump-off and crossed the timers clear in 37.34 seconds, which eventually stood for the win.

Andrew Ramsay (USA) piloted Cocq a Doodle to a double-clear effort and finished in 38.55 seconds to earn second place for The Doodle Group. Charlie Jacobs (USA) was third aboard Cassinja S, owned by CMJ Sporthorses, LLC, just fractions of a second behind Ramsay in 38.77 seconds. Adrienne Sternlicht (USA) was fourth riding Toulago for Starlight Farms, LLC, in 40.08 seconds, while Georgina Bloomberg (USA) rounded out the top five riding Manodie II H, owned by Gotham Enterprizes, with a jump-off time of 43.79 seconds.

“Anytime you win it is special because this is quite a humbling sport; you can win one day and be on the ground the next,” said Madden, who was a member of the 2016 silver medal-winning team at the Rio de Janeiro Olympic Games. “Last year, I concentrated a lot on the Olympics and didn’t try to win many grand prix events, but this horse has picked up two wins already this year and it feels great.”

Breitling LS joined Madden’s string as a seven-year-old and is now one of her top horses. Madden is on U.S. nations’ cup teams at Aachen and Dublin later this year, with Breitling LS as one of her planned mounts.

Of Krome’s tracks, Madden noted, “I thought they were really nice. It is difficult to build a two-star when you have these top riders here, but he had ten clear, which was excellent. We are usually coming off a break this time of year with a lot of these horses, and it is nice to come here where there is a two-star this week and a three-star next week. You can gradually build them up.”

For Ramsay, Sunday’s second-place finish aboard Cocq a Doodle is a step in the right direction towards the ten-year-old Dutch Warmblood mare (Tolan R x Niagara) becoming a top grand prix mount. Ramsay has had Cocq a Doodle for about a year and is competing at Old Salem Farm for the first time this year.

“She is a great horse – really fast and competitive,” said Ramsay. “She gave it her all, and in the end it wasn’t quite quick enough today, but we will keep on trying. The track posed some good questions with some options, so you weren’t locked into the numbers and it allowed us to adjust for our different horses.

“I am from California, so I have never been in this part of the country at this time of the year,” continued Ramsay. “I love jumping here, and I am thrilled to be here for two weeks.”

The Old Salem Farm Spring Shows is the first competition for Jacobs and Cassinja S after competing at the Longines FEI World Cup Final in Omaha, NE, earlier this spring. Cassinja S, an 11-year-old Dutch Sporthorse mare (Carinjo x Cassini I), is coming off a month-long rest and has quickly bounced back.

“I am debating whether or not to show her next week because of how nicely she went,” said Jacobs, who has owned Cassinja S for four years. “As with most great horses, as they get older they tend to mature and develop in terms of their repertoire and ability, and she really showed that here. I could not be more proud of how she is jumping.”

As Week I of the Old Salem Farm Spring Horse Shows comes to a close, FEI riders will now turn their focus to CSI3* competition during Week II, which offers the $130,000 Empire State Grand Prix, presented by The Kincade Group.

Krysiewicz-Bell, 16, is a sophomore at Marymount School of New York at when she isn’t training with Andre Dignelli and Patricia Griffith at Heritage Farm in Katonah, NY. She added Early Winter to her string as an equitation mount, but competes him in hunter and jumper classes as well.

“He can do anything,” she said. “We won the handy at Junior Hunter Finals together two years ago, went to Pessoa Medal Finals last year, and I have done schooling jumper classes with him. He is the perfect horse.

“He is probably the horse that has improved my riding the most,” continued Krysiewicz-Bell. “He is so versatile, and I can get so much experience on him. He helps me learn and is the reason I moved up to the bigger equitation classes and the junior hunters.”

While earning a grand championship is a highlight for Krysiewicz-Bell, her focus now turns to qualifying for year-end equitation finals with Early Winter.

The reserve champion tricolor in the Large Junior Hunter 16-17 Division was presented to Lorenzo, owned by Karen Hao and ridden by Caroline Dance. Dance and Lorenzo collected third, fourth, and sixth-place ribbons over fences, were second in the handy, and won the under saddle.

The Old Salem Farm Spring Horse Shows continue on Tuesday, May 16, with another week of hunter, jumper, and equitation competition featuring the $130,000 Empire State Grand Prix CSI3*, presented by The Kincade Group, on Sunday, May 21.

Spectators are welcome at the Old Salem Farm Spring Horse Shows. General admission to Old Salem Farm is free Wednesday through Friday. On the weekend of May 20-21, admission is $15 for adults and $10 for seniors and children under 12. Tickets are available at OldSalemFarm.net.