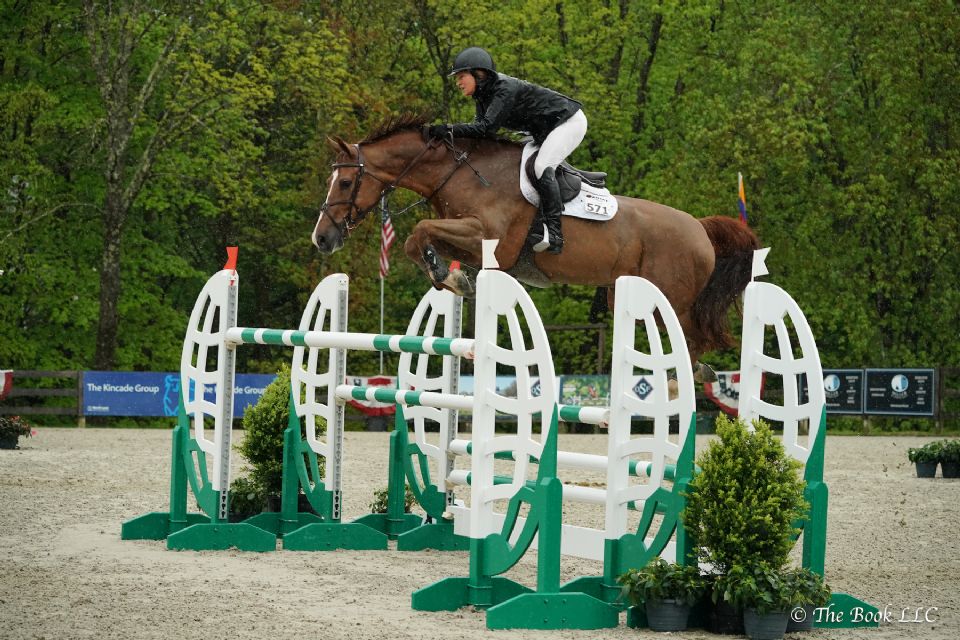 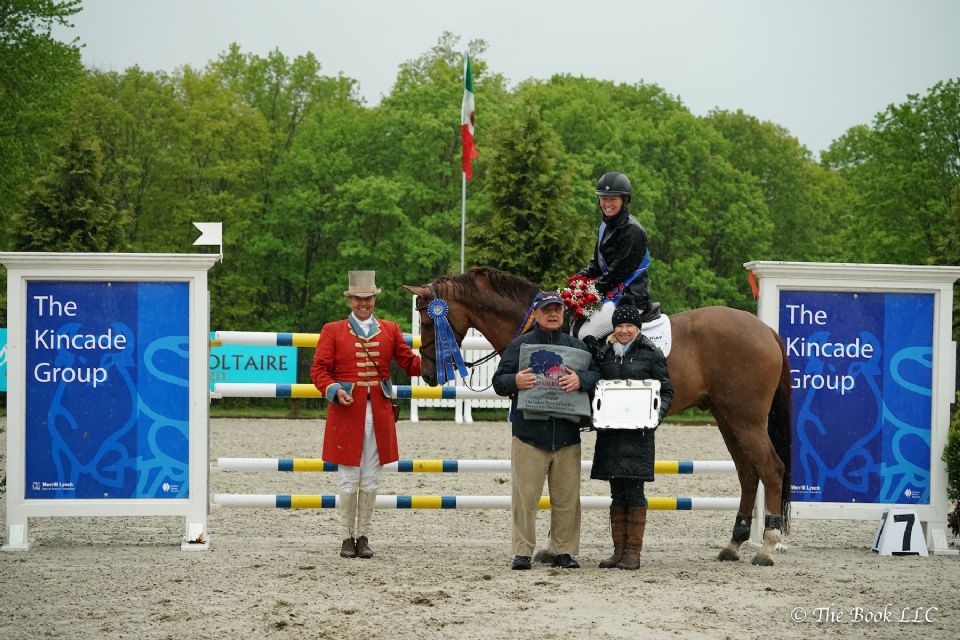 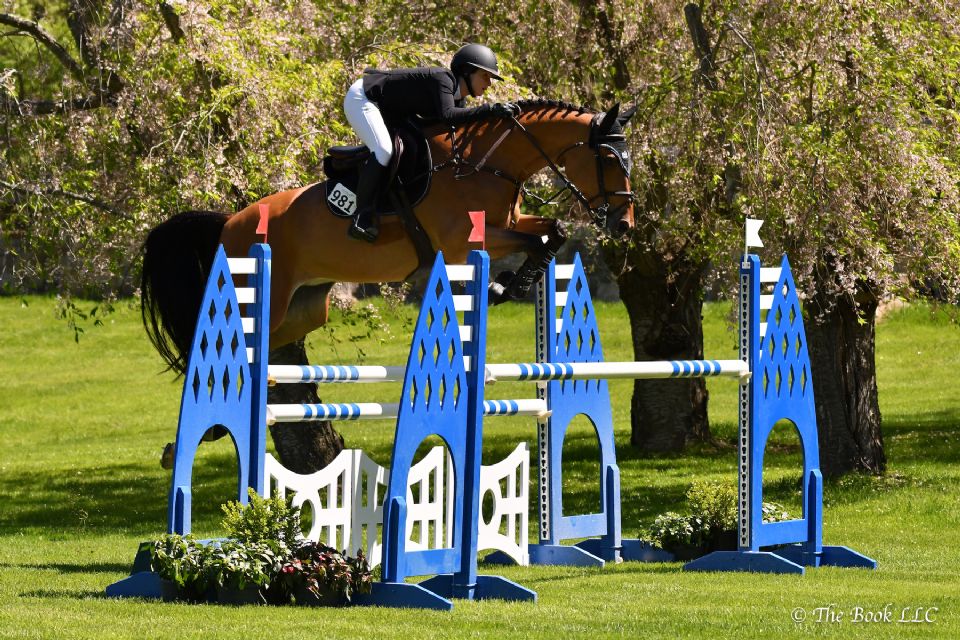 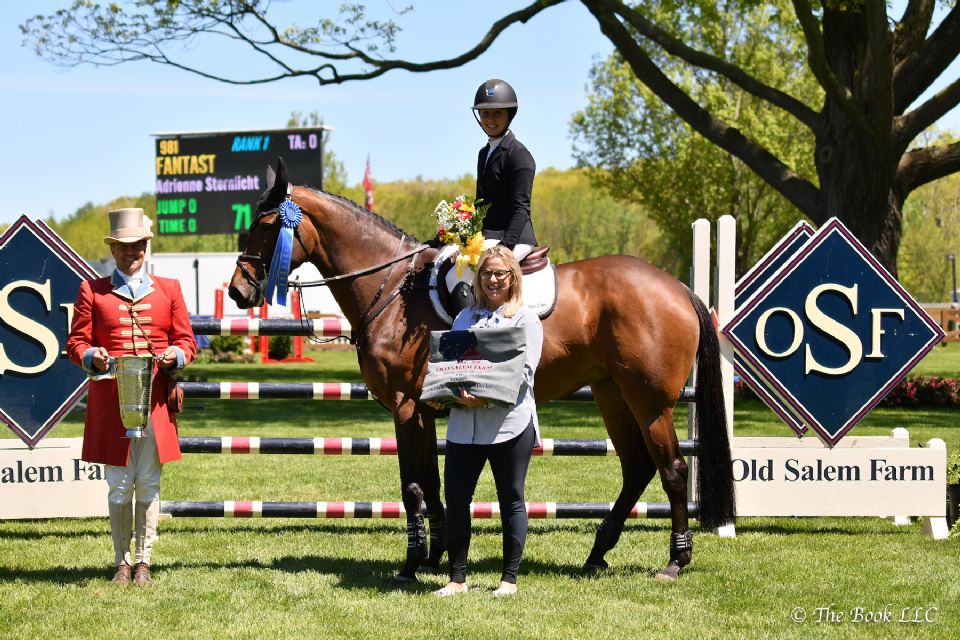 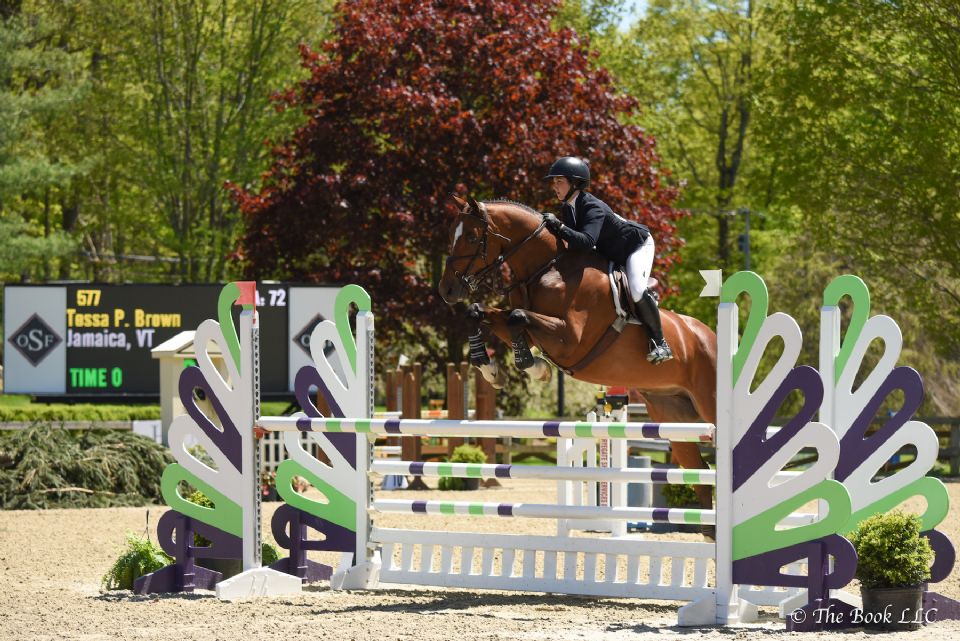 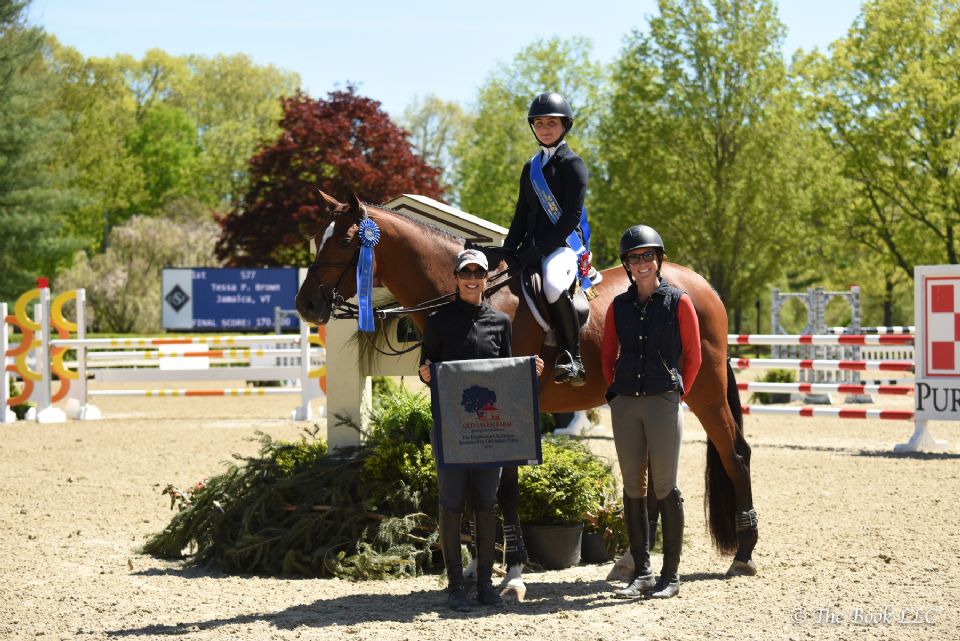 Tessa Brown of Jamaica, VT, and Davide are presented as winners of the Equitation Challenge with trainer Kyla Makhloughi (left) at the 2019 Old Salem Farm Spring Horse Shows at Old Salem Farm in North Salem, NY.
Photo by The Book

Nine horses advanced to the jump-off over Eric Hasbrouck’s (USA) course and Madden put her horse’s speed to the test to post the fastest tie-breaking time by nearly two full seconds in 33.84. Mändli settled for second riding Simba for Grand Road Partners in 35.46 seconds.

“He is just an eight-year-old, but I got him during the fall of his six-year-old year, so we have gotten to know each other a little,” said Madden, 55. “He has done some ranking classes, but never a grand prix and I was so pleased with him.”

Before joining the John Madden Sales string, Garant, owned by Abigail Wexner, was competitive in young horse competition and won the 2016 FEI World Breeding Jumping Championships for five-year-old horses in Lanaken, Belgium, under the direction of Dutch rider Willem Greve.

“He’s one we have a lot of hopes for!” said Madden. “He will move up to the 1.50m consistently this summer and by the end of the year we have some smaller grand prix classes planned for him again.

“Today, I saw Daniel [Bluman] and Beat go and I thought they were excellent in the turns,” continued Madden. “I wasn’t sure I could do the same, but he has a big stride. I galloped up the first line in six [strides], was pretty quick to the double, caught a long one to the next, and nailed the last jump off the turn. He was really good to me there because I don’t think he really knew where he was going at that point. He made a great effort.”

As the first week of the Old Salem Farm Spring Horse Shows comes to a close, FEI riders will now turn their focus to CSI3* competition during week two, which offers the $133,700 Empire State Grand Prix, presented by The Kincade Group, on Sunday, May 19.

Adrienne Sternlicht of Greenwich, CT, has jumped the Old Salem Farm Speed Derby, presented by TownVibe, every year she has competed at the Old Salem Farm Spring Horse Shows, but this year she introduced a new mount to the spectator-favorite event. Fantast, a 14-year-old Belgian Warmblood (Toulon x Rubes du Ri d’Asse) owned by Starlight Farms, carried Sternlicht to a quick clear in 71.63 seconds for the win.

After celebrating her 26th birthday on Thursday, Sternlicht showed off her horse’s speed on the Old Salem Farm Grand Prix Field, noting, “This is typically my FEI speed horse. He’s really quick across the ground and I really enjoyed this class because I think my horse really had fun out there. He got to jump a bit smaller and gallop around that beautiful field.
“Probably my greatest advantage is my horse’s natural foot speed,” continued Sternlicht, who rides under the tutelage of Brewster-based U.S. Olympian McLain Ward and recently relocated to work out of her own farm in Greenwich, CT. “He doesn’t spend a ton of time in the air, and he’s quick across the ground. I felt like I was prompt everywhere, particularly the turn on the bank, and I just tried to fly everywhere.”

Fourteen-year-old Tessa Brown of Jamaica, VT, put on an exhibition in perfect style to win the Equitation Challenge at the Old Salem Farm Spring Horse Shows. After competing throughout the week in the Low Junior Jumpers, Medium Junior Jumpers, and 3’6” Junior Hunters, Brown focused on her equitation over the weekend riding Davide, owned by Equipearl, LLC.

Davide carried Brown to score an 81 in the first round and they returned to impress with an 89, which totaled to a 170, just one point ahead of runner-up Sophee Steckbeck, who score an 82 and 87 riding Crossbow, owned by Redfield Farm. Alexandra Pielet and Common Sense, owned by Co-Pielet, LLC, rounded out the top three on scores of 83 and 85.5 for a 168.5 total.

“I chose to do this class because it’s great practice for the upcoming equitation events this summer and indoor finals in the fall,” said Brown, who has been in the saddle since she was four years old and trains with Kyla Makhloughi. “It’s a good setup and was good exposure for me and the horse.

“Leading up to this, it’s been a lot about the connection with the horse,” continued Brown. “I have an amazing horse and trainer and we do a lot of practicing at home. Next, I will head to Devon and my most immediate goal is to do well there and have a consistent summer.”

Spectators are welcome at the Old Salem Farm Spring Horse Shows with free general admission to Old Salem Farm Tuesday through Friday. On the weekends of May 11-12 and 18-19, admission is $15 for adults, $10 for seniors and children 10-15, and free for children under 10.