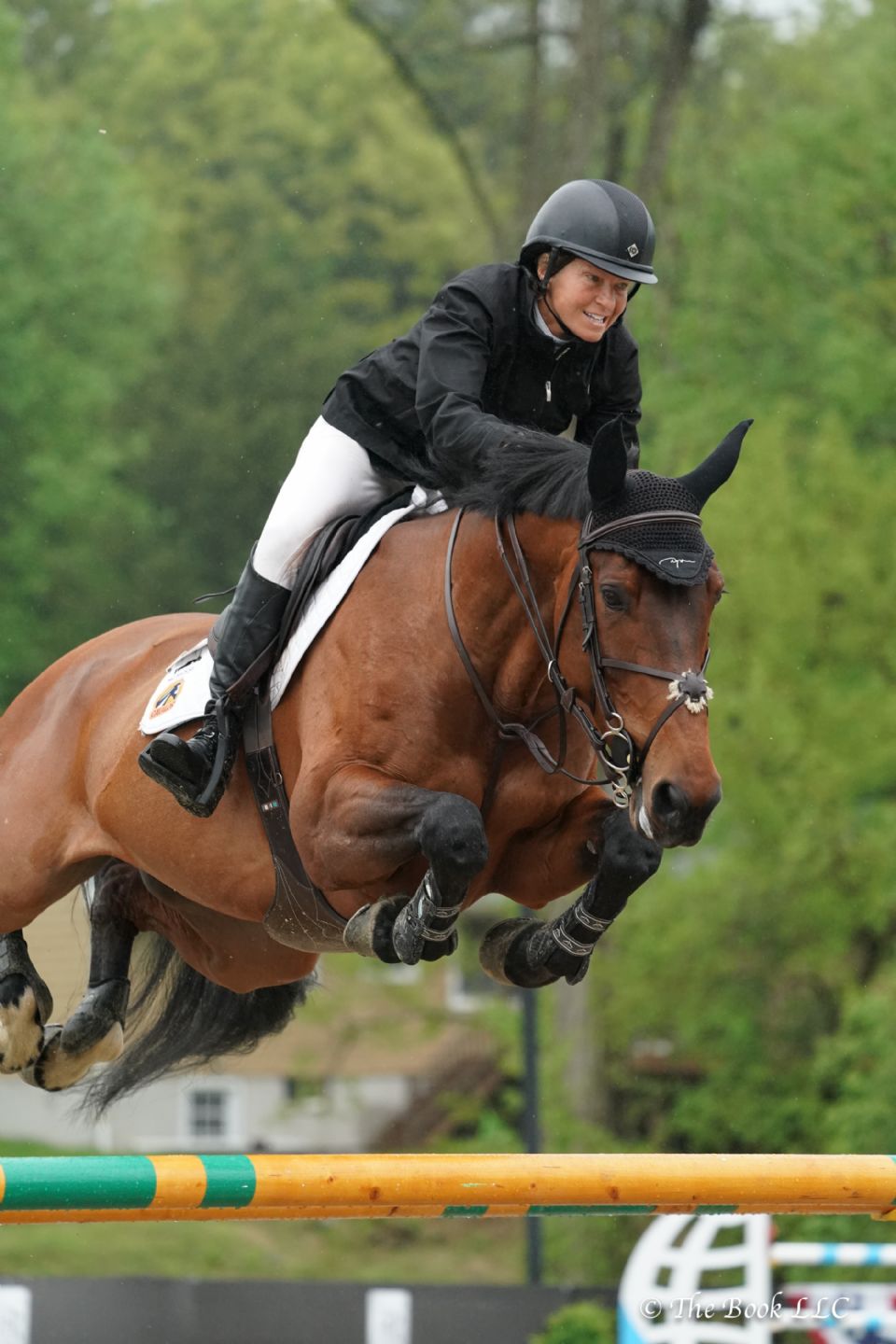 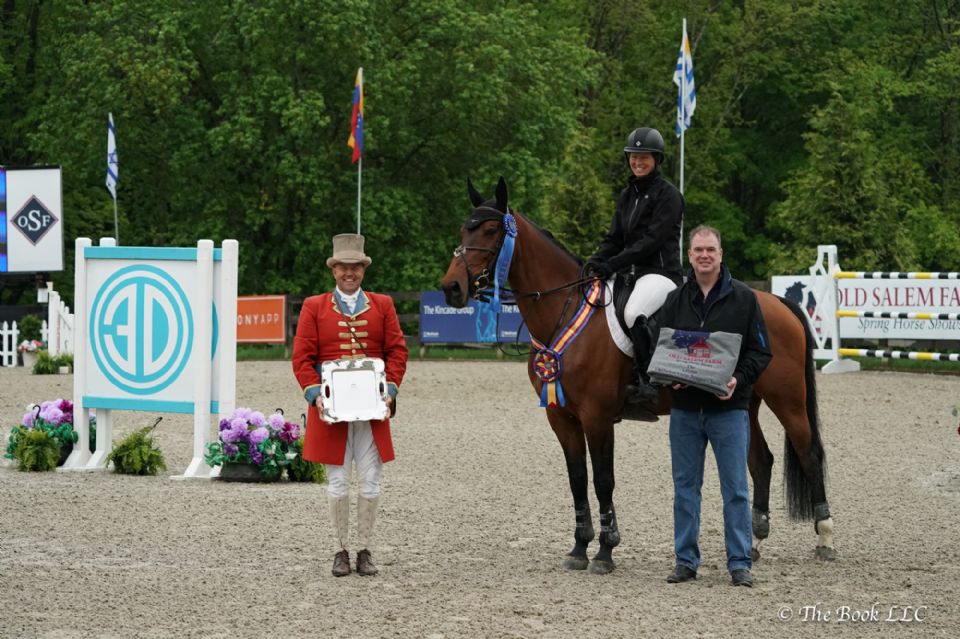 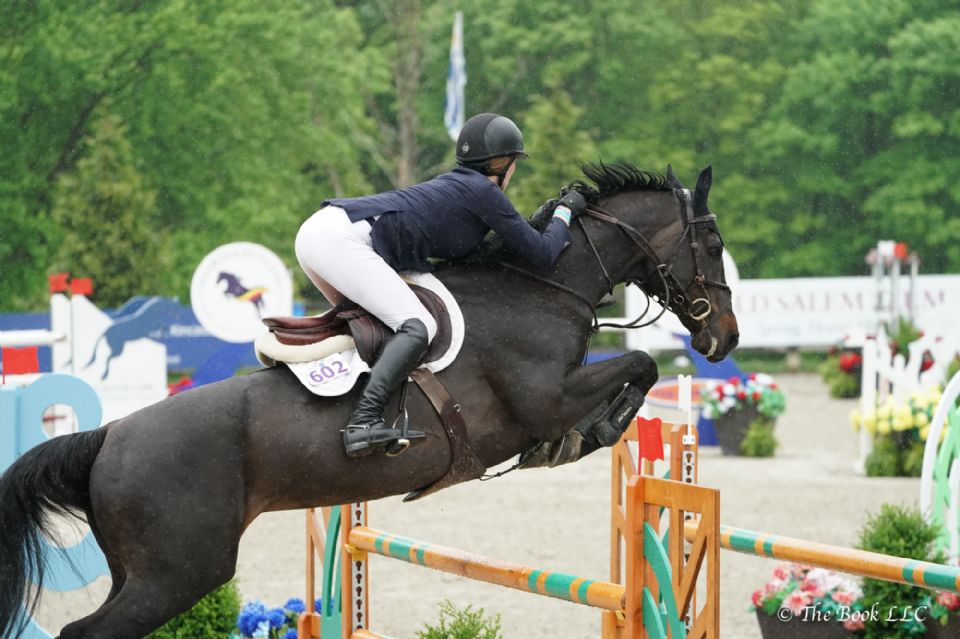 Katherine Strauss won the $15,000 Under 25 Grand Prix, presented by Miller Motorcars, riding All In on Saturday, May 19, during the 2018 Old Salem Farm Spring Horse Shows at Old Salem Farm in North Salem, NY.
Photo by The Book 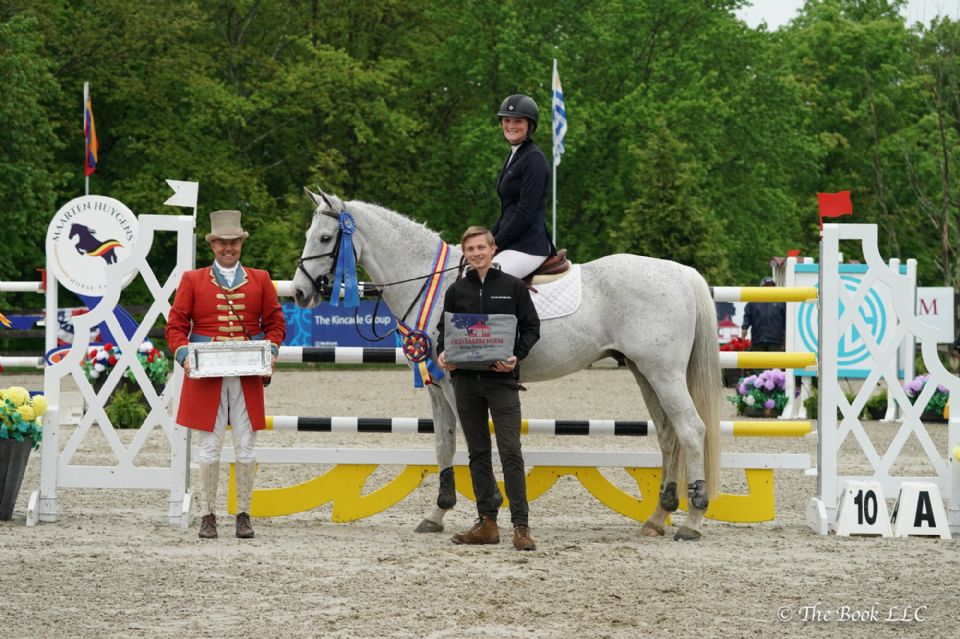 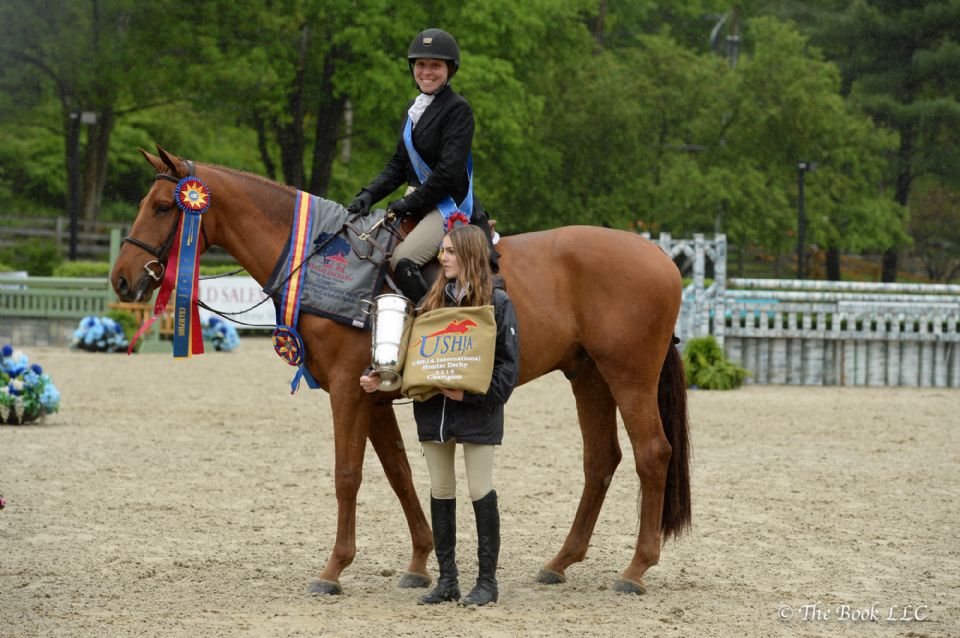 Keirstin Johnsen, owner Summer Witherspoon, and Aster de la Cense are presented as winners of the $15,000 USHJA International Hunter Derby, presented by The Gochman Family, on Saturday, May 19, at the 2018 Old Salem Farm Spring Horse Shows at Old Salem Farm in North Salem, NY.
Photo by The Book 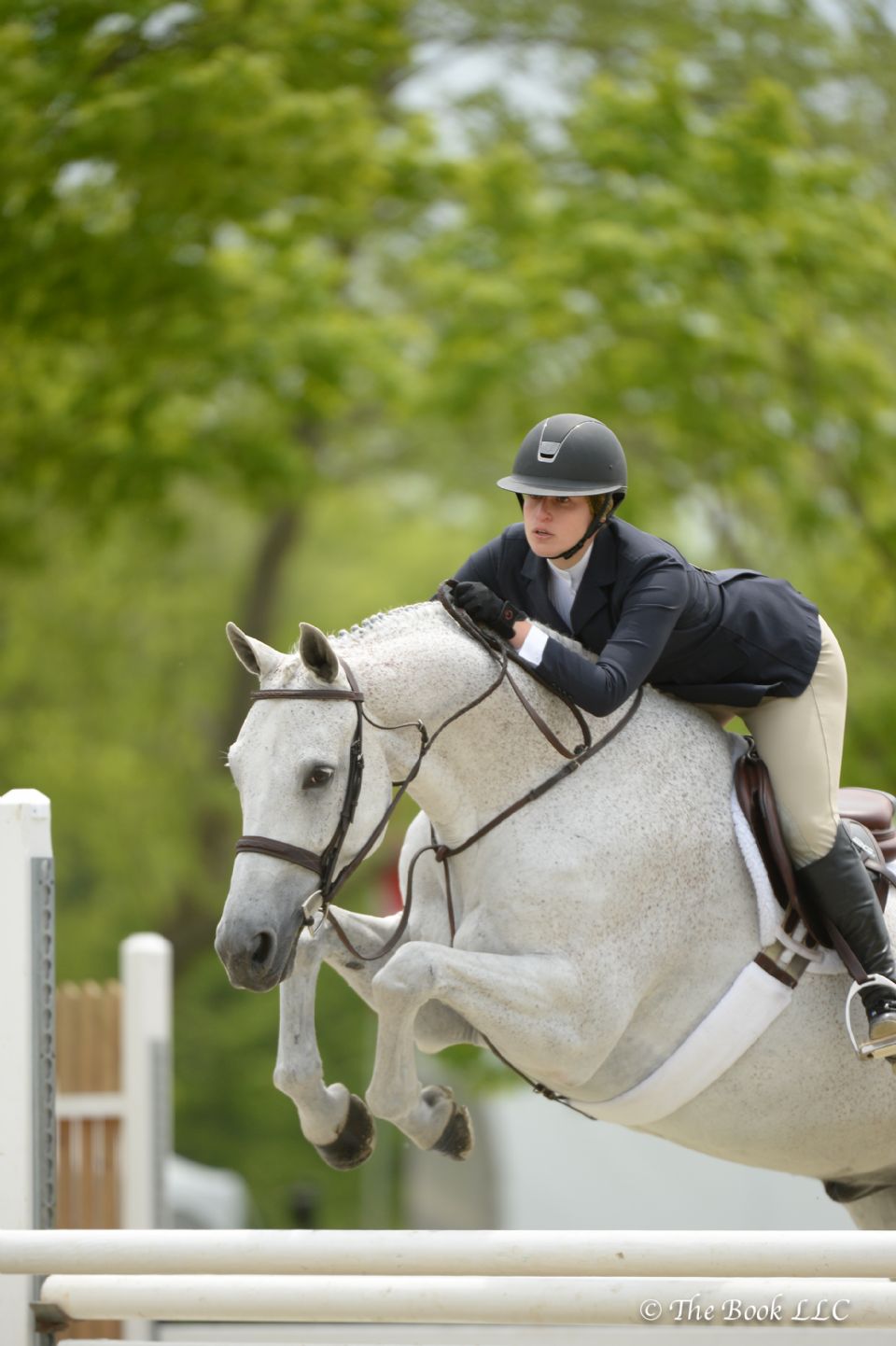 Madden utilized the speed of Jiva, a nine-year-old BWP mare to score the win in a 12-horse jump-off over courses designed by Ireland’s Alan Wade. She crossed the timers double clear in 32.90 seconds for owner Abigail Wexner, while fellow U.S. rider Amber Harte settled for second-place honors in 33.10 seconds riding Austria 2, owned by Take The High Road, LLC.

Madden got the ride on Jiva at the start of 2017, saying, “She was a pretty green eight-year-old at the time and I didn’t get her in time to show in Florida last year, but she started to catch up to the nine-year-olds. She is super careful, so we have to take a little time with her because we don’t want to get her in trouble anywhere.”

Saturday’s win was Jiva’s best FEI ranking class finish to date and Madden has high hopes for the mare.

“She has some all-around foot speed between the fences,” said Madden. “Today, from one to two she was really quick and I did six down to the last [jump], which not everybody did.

“We love showing on the grass here but when it does rain, luckily we have a good place to show in the sand,” continued Madden of competing at Old Salem Farm. “It’s nice to be able to rely on being able to show when it does rain.”

Madden will compete in the $131,000 Empire State Grand Prix CSI3*, presented by The Kincade Group, on Sunday with her other top mount Darry Lou.

Katherine Strauss, 19, of New York, NY, claimed a win in the $5,000 Under 25 Grand Prix, presented by Miller Motorcars, in a three-horse jump-off riding her own All In. Strauss piloted two horses over the short course with the only challenger being Brianne Link of East Islip, NY, in her Under 25 division debut.

Strauss crossed the timers clear in a blazing 29.991 seconds for the win aboard All In, while Link, 19, finished second riding her own Dobalia in 32.093 seconds. Strauss rounded out the top three aboard her own Capacity with a time of 33.320 seconds.

“I really like the Under 25 division because it is a great stepping stone between the high amateurs and high juniors to the FEI classes,” said Strauss, who has had success in the division under the direction of her trainers John Madden and four-time U.S. Olympic medalist Beezie Madden.

All In, a 13-year-old Dutch Warmblood gelding (Aachen x Indoctro), has not competed since late July 2017 and made a return to the show ring at the Old Salem Farm Spring Horse Shows.

“I just finished my first year at Vanderbilt and we thought that would be a good chance to give All In some time off,” said Strauss of the mount she’s had for four years. “I’m so happy we did. It seems to be paying off and he’s done so much for me, so I want to do everything I can to help him. In these first few weeks before stepping up to the FEI division, the Under 25 gave us a chance to seriously get going without risking anything with his fitness and confidence.”

All In was turned out at the home base of John Madden Sales in Cazenovia, NY, along with other accomplished equine athletes, including San Remo, the 2017 ASPCA Maclay Final winner, owned by Strauss’s barn mate Madison Goetzmann.

“The cold weather is so good for their legs, health, and happiness,” continued Strauss. “I am lucky to have a team at John Madden Sales that is excellent at developing horses and helping rehab horses. As soon as I got done with my finals, I went to Cazenovia and he was ready to start jumping again.”

Victoria Birdsall, 24, of Frenchtown, NJ, finished fourth riding her own Doman with the fastest four-fault ride from the first round in 69.150 seconds. Lucy Deslauriers, 18, of New York, NY, rounded out the top five riding Kaspara for owner Luja, LLC, with a rail and a time fault in the first round.

Keirstin Johnsen of North Salem, NY, captured victory in her first-ever USHJA International Hunter Derby on Saturday during week two of the Old Salem Farm Spring Horse Show. The class offered $15,000 in prize money and was sponsored by The Gochman Family. Johnsen and Aster de la Cense, owned by Kimberly Witherspoon, were crowned the winners.

In the first round, Johnsen and Aster de la Cense scored 164 and added a score of 189 in the handy for a total of 353 for the win. Second place went to Early Winter, ridden and owned by Aubrienne Krysiewicz-Bell, who had a total score of 344.5. With a final score of 344, Amber Harte and Style, owned by Take the High Road LLC, placed third.

“He’s super fabulous,” she said of the eight-year-old Selle Français gelding by Mylord Carthago. “I couldn’t say enough things about him; we joke that he is the total unicorn. He’s kind of like an old soul, and he hasn’t done that much.”

The decision to compete in the derby was last-minute, and Johnsen also decided to forgo the high options to “play it safe.”

“I thought the ring footing held up nicely,” she said. “He actually went better in the rain; he had a little more life and extra pizazz.”

The pair won the handy round, which Johnsen said was a nice change of pace for the gelding.

“He almost rises to the occasion when he doesn’t know what’s coming, I’m learning,” said Johnsen. “He gets a little bored when it’s simple and he knows the drill. As he’s getting a surprise, he seems to rise up and be a little extra special. I could not have asked him to be better. There is nothing I would have changed about my handy.

“It feels great!” continued Johnsen of her first derby victory. “It’s really nice. [His owners] were very excited to watch him. They said they wanted to see him do [a derby], but that opportunity just never worked out before. They were super excited, and it was nice they let me do it and we had a nice result.”

International jumper competition comes to a peak on Sunday with the $131,000 Empire State Grand Prix CSI3*, presented by The Kincade Group. In the hunter ranks, the Grand Pony, Children’s and Junior Hunter Champions will be crowned.

Spectators are welcome at the Old Salem Farm Spring Horse Shows. On March 20, admission is $15 for adults and $10 for seniors and children under 12.