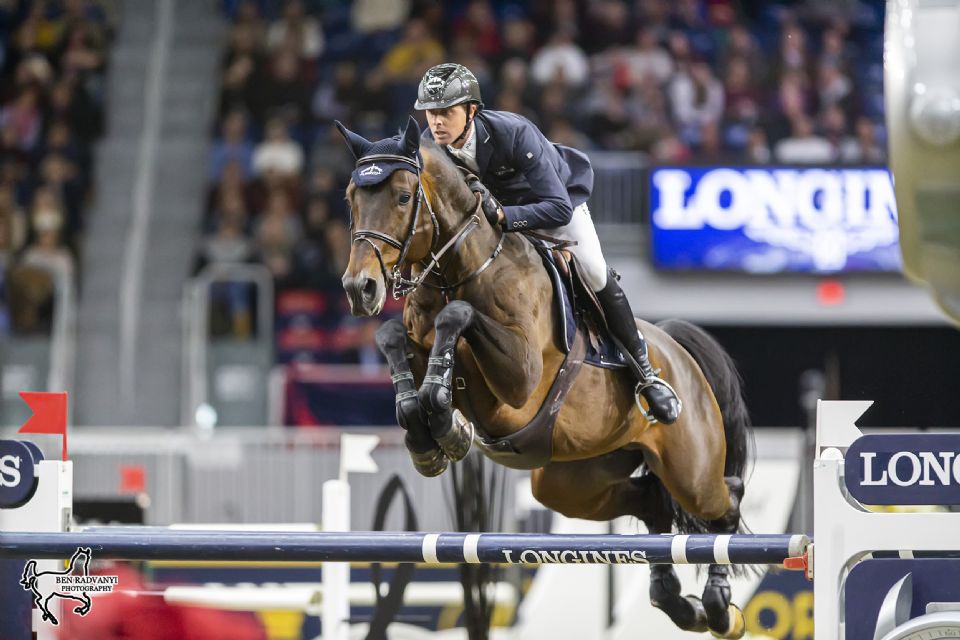 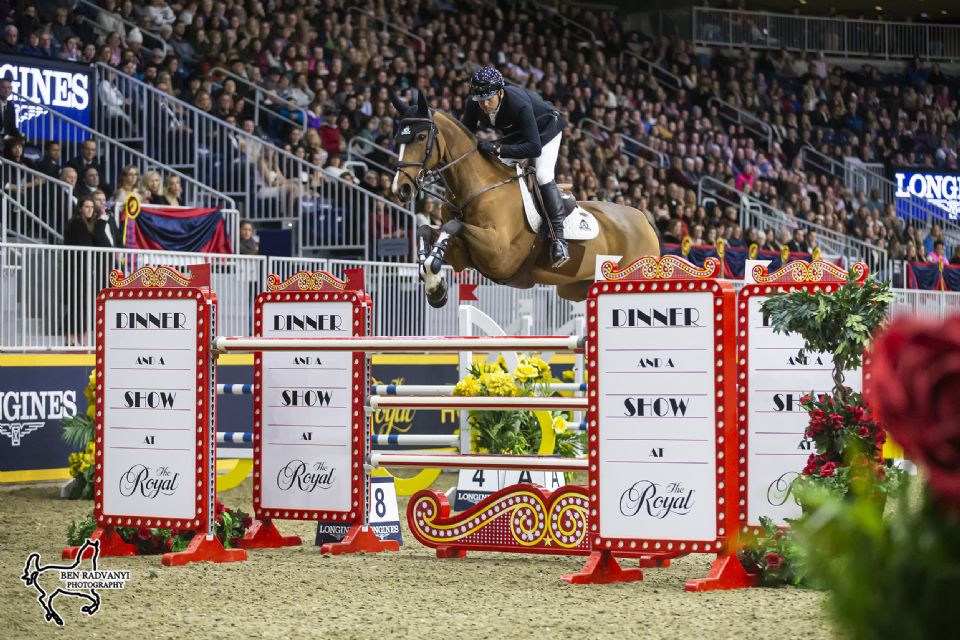 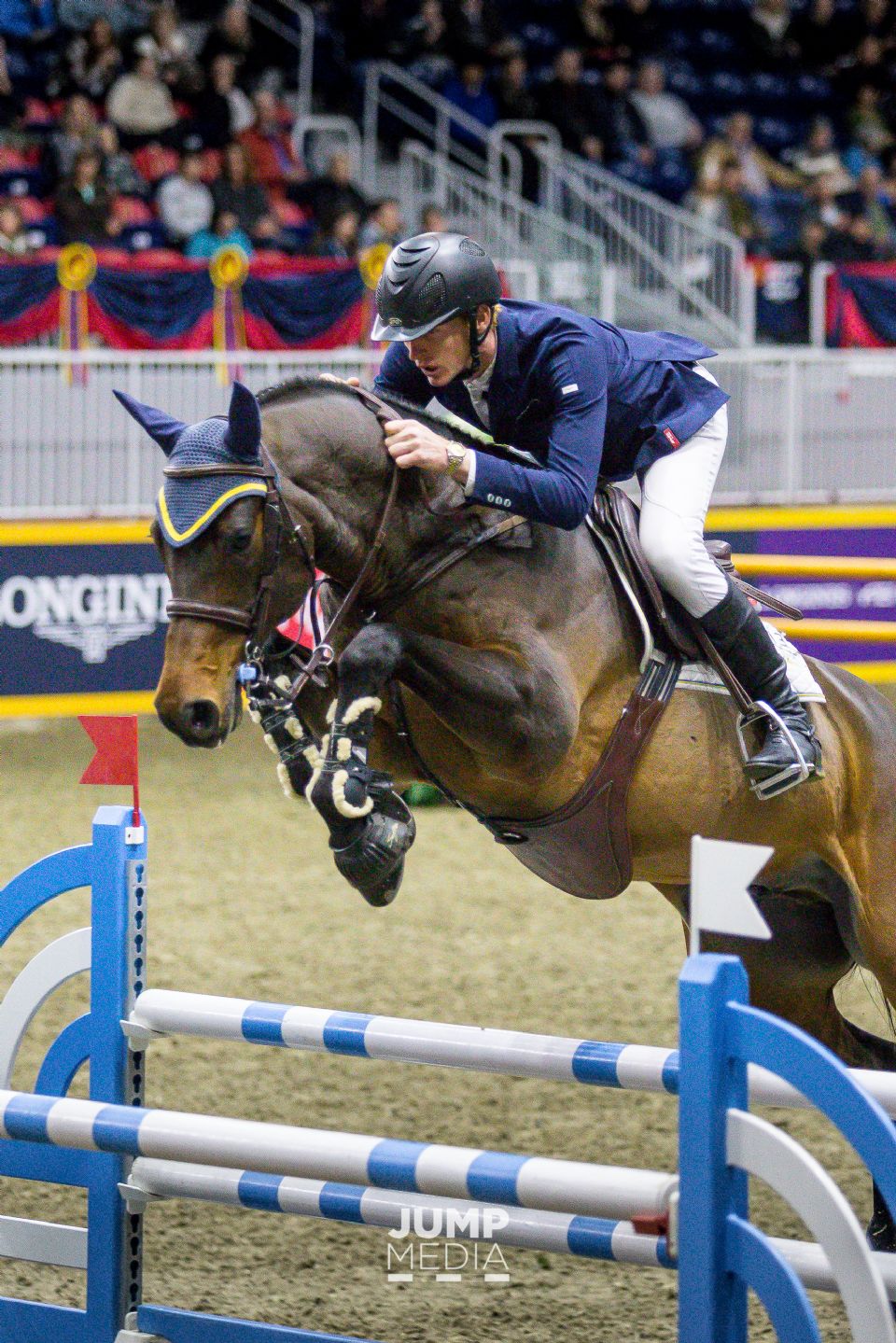 Daniel Coyle of Ireland raced to victory riding Farrel in the $37,000 Brickenden Trophy on Thursday afternoon, November 7, at the Royal Horse Show.
Photo by Jump Media

It was a true battle of excellence as Olympic team gold medalist Ben Maher of Great Britain nudged Canadian Olympic individual gold medalist Eric Lamaze for victory in the $85,000 Big Ben International Challenge on Thursday night, November 7, at the Royal Horse Show, held as part of the 97th Royal Agricultural Winter Fair in Toronto, ON.

Canadian course designer Michel Vaillancourt set a testing track that allowed the best horses and riders in the world to showcase their skills in front of a packed house in the Coca-Cola Coliseum.  A total of 15 riders qualified for the jump-off, setting the stage for a battle of epic proportions.

As the 10th rider back for the jump-off, Lamaze set a blistering pace in front of the home crowd, slicing and dicing around the shortened track before galloping through the timers in 37.17 seconds.  Next to challenge, Maher used Tic Tac’s huge stride to his advantage. When the clock flashed 36.75 seconds, Maher moved to the top of the leaderboard and remained there to take the win for owner Jane Clark.

“I think a lot of people didn’t like me in the stadium here this evening to beat Eric, but it’s sport; I always try my best!” said Maher, 34, who won a team gold medal as a member of the British team at the 2012 London Olympics.

“[Tic Tac] deserved this win,” continued Maher of the 16-year-old Belgian Sport Horse stallion.  “He’s been knocking at the door.  He didn’t jump many shows, but he had a couple of second places, so it’s nice to win a class with importance like this this evening.”

While Lamaze, 51, was forced to settle for second with Fine Lady 5, he currently leads both the GroupBy Leading International Rider and Leading Canadian Rider standings, helped by a win in the $37,000 McKee Family International Challenge on Wednesday, November 6.

Earlier in the day, Daniel Coyle of Ireland claimed the win in the afternoon’s featured $37,000 Brickenden Trophy. Riding Farrel for owner Ariel Grange, Coyle topped a 12-horse jump-off after posting the winning time of 31.85 seconds.  Next into the Coca-Cola Coliseum, 18-year-old Brian Moggre of the United States made a valiant attempt to catch the leading time riding MTM Flutterby, but he settled for second place when the clock flashed 32.28 seconds.  Australia’s Rowan Willis took third place with a time of 33.29 riding Calisto 26, while Lamaze and his mount, Chacco Kid, were fourth with a time of 33.68 seconds.