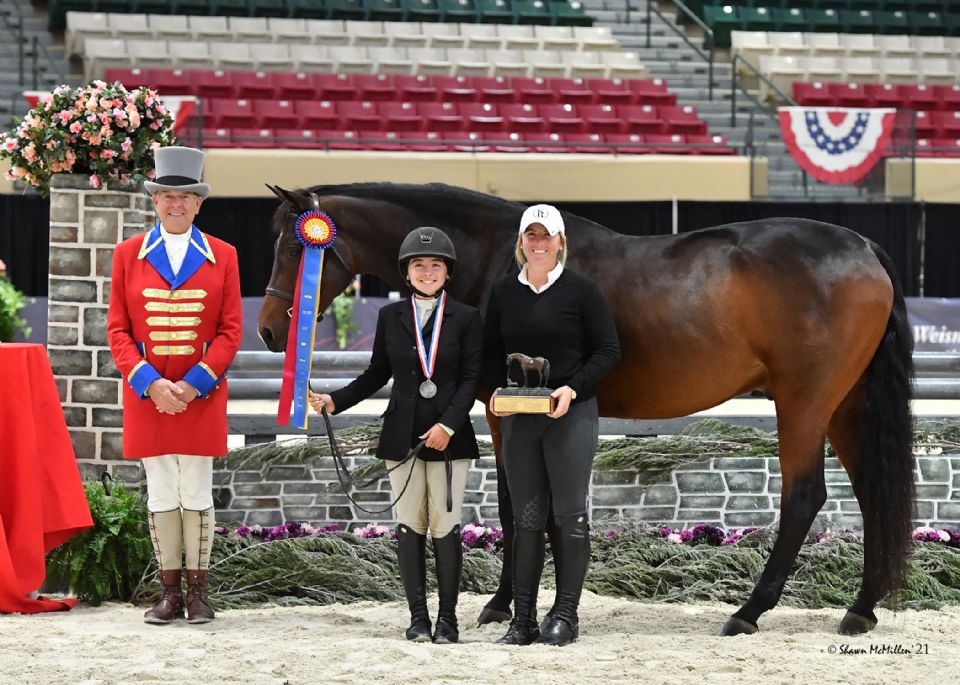 In their first show together, Augusta Iwasaki and Commentary won the Grand Junior Hunter 3'6 Championship. 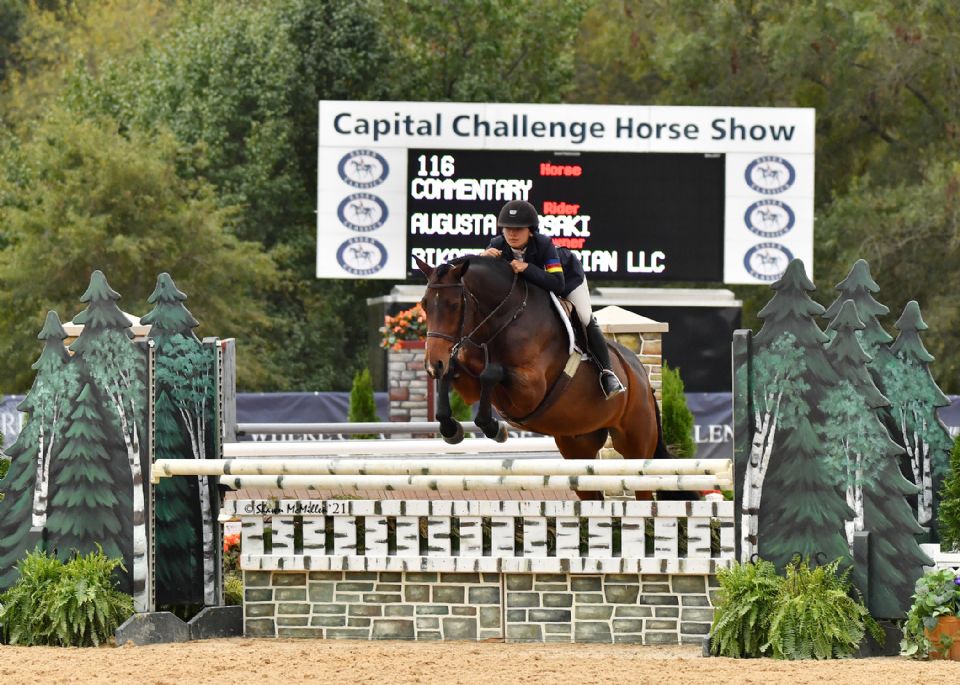 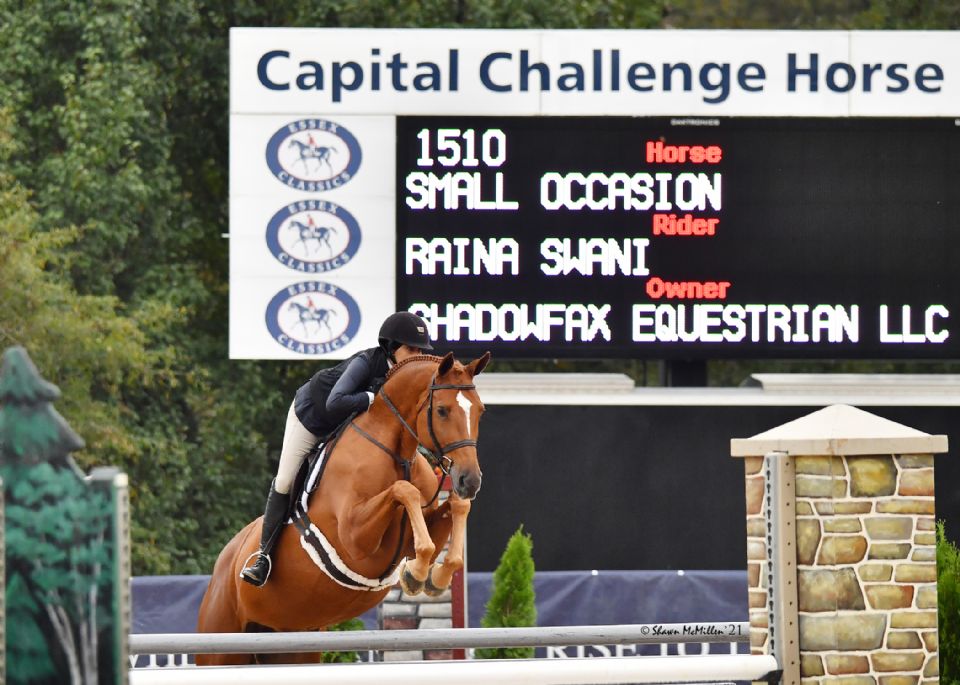 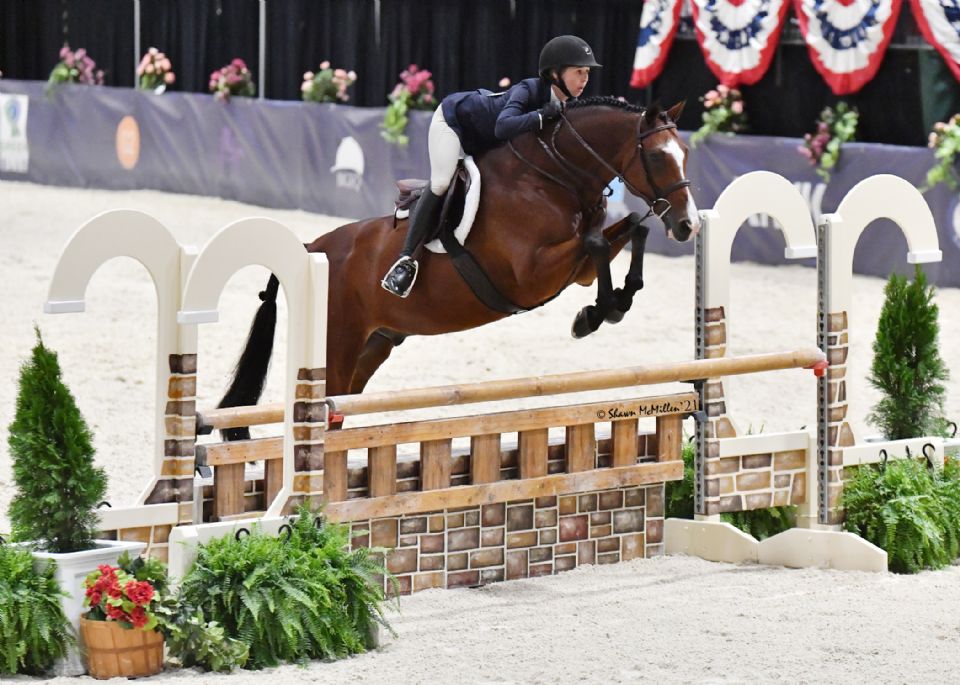 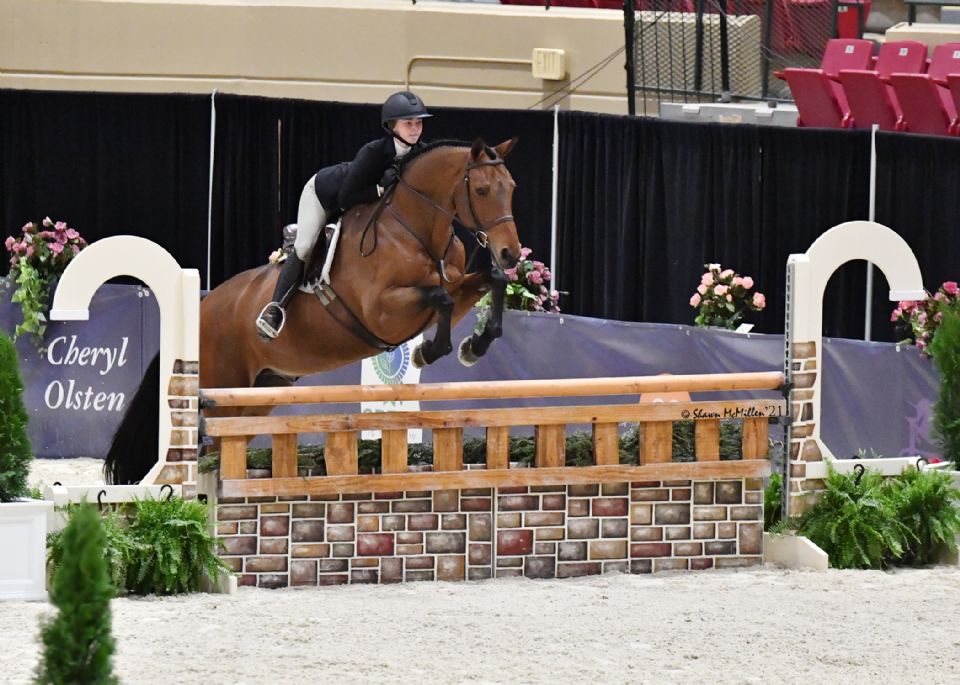 Brooke Morin and For Fun were the Large Junior Hunter 16-17 champions.
Photo by Shawn McMillen Photography 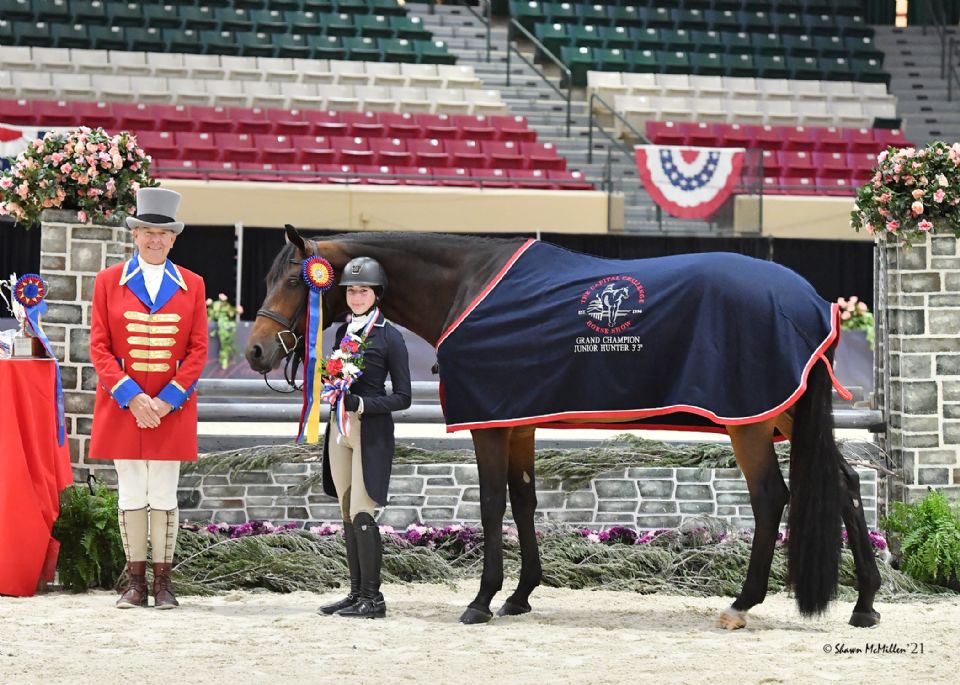 Clara Propp and Arabesque won the Grand Junior Hunter 3'3 Championship in their first time at an indoor final together.
Photo by Shawn McMillen Photography 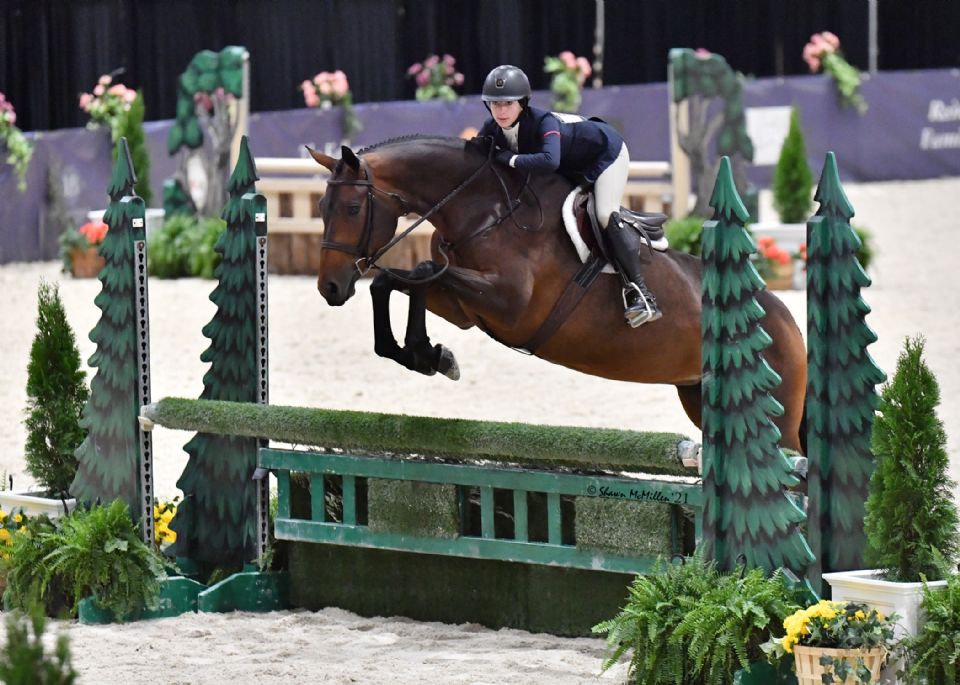 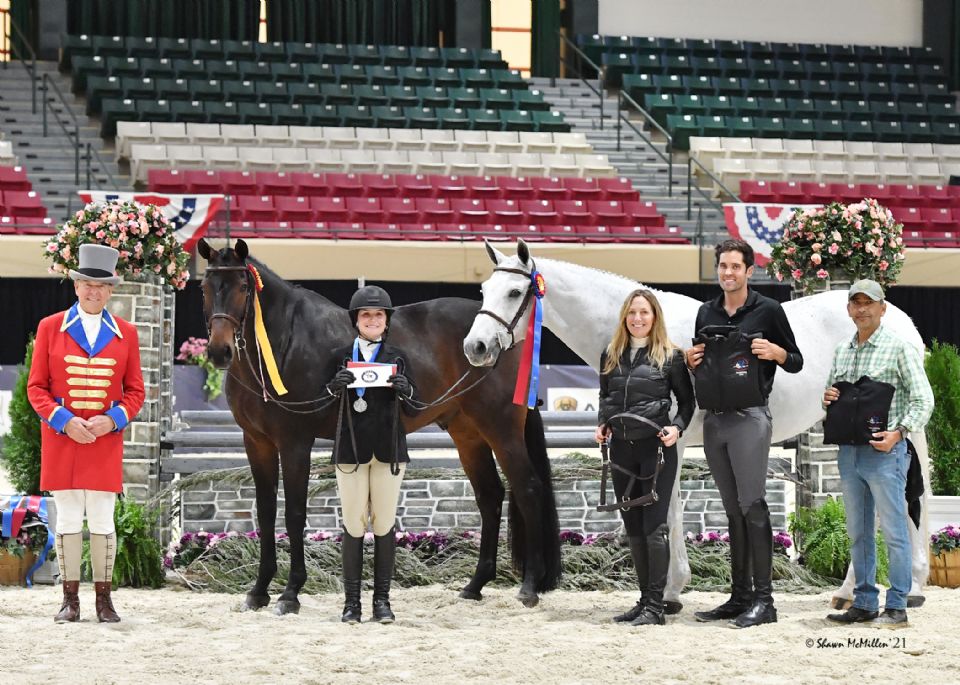 Lauren Little swept the Junior Hunter 3'3 15-17 division, taking the championship with Surf's Up and the reserve championship on Belgravia.
Photo by Shawn McMillen Photography 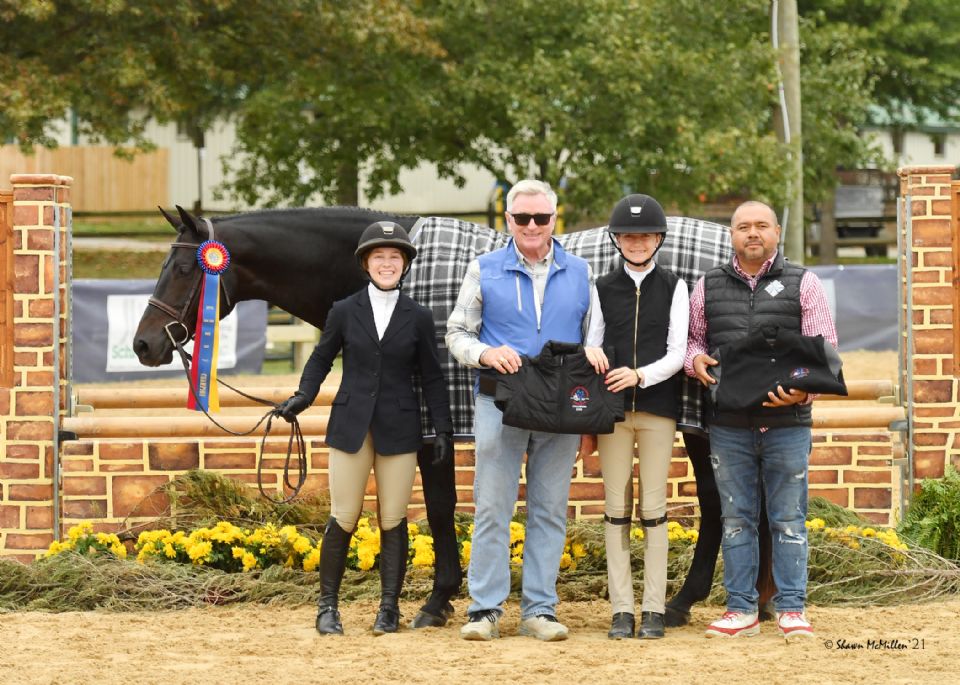 Alexa Karet brought home another grand championship for her family, this time in the Children's divsiion with Catbird.
Photo by Shawn McMillen Photography 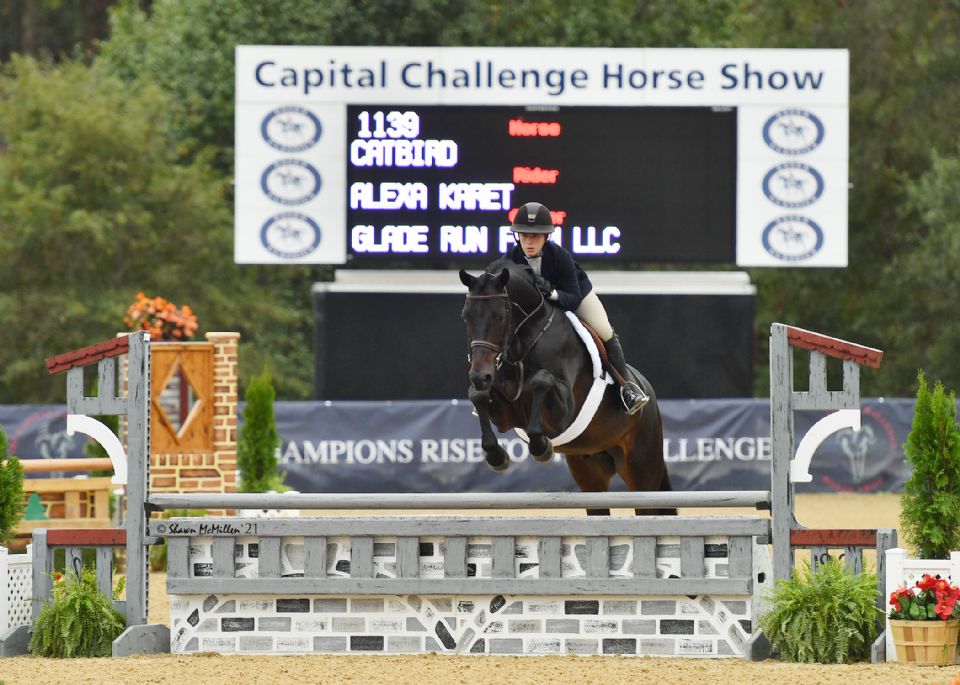 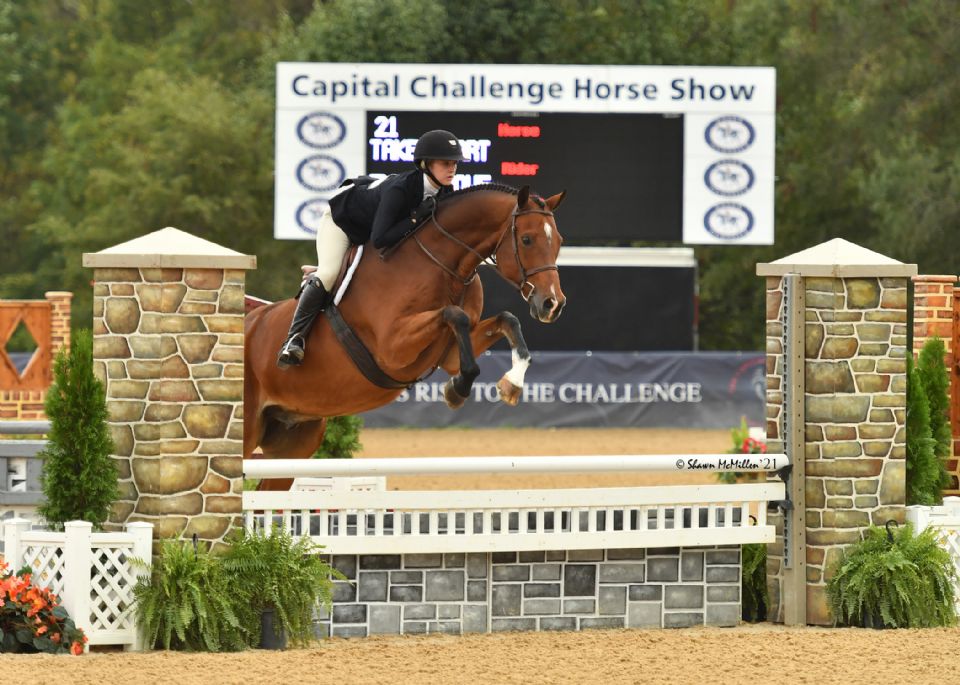 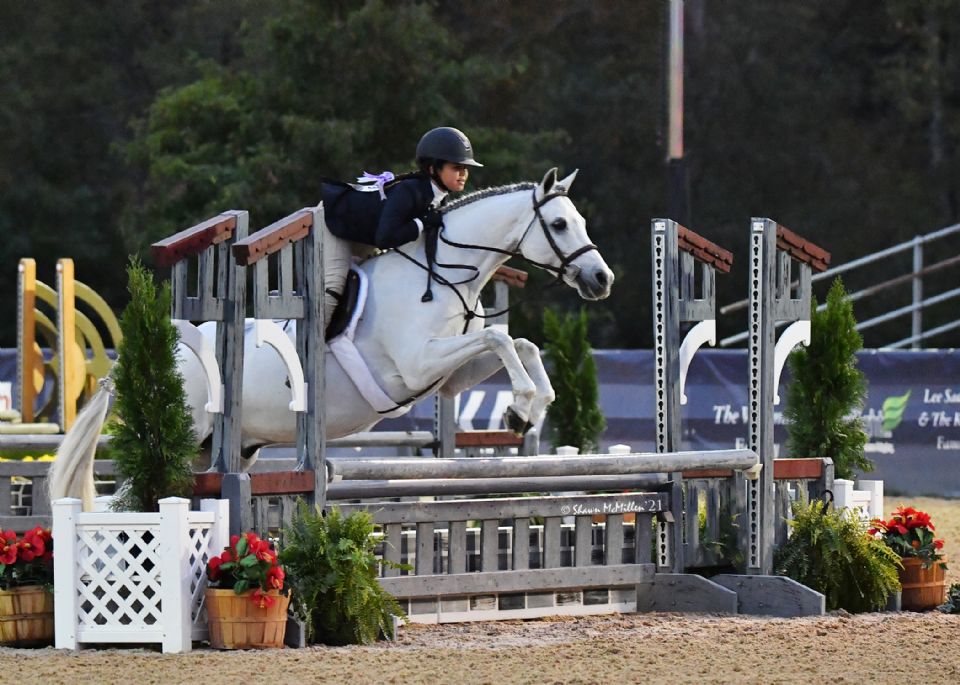 Iwasaki and Commentary first earned the Small Junior Hunter 16-17 championship, sponsored by Three Ships LLC, before being crowned Grand Champion. The pair earned two blue ribbons over fences, a second place in the stake class, and an additional first place in the under saddle.

“I thought my rides were really solid and consistent,” explained Iwasaki. “I think it’s important in these types of competitions because you only have three jumping classes, so I just really wanted to be consistent.”

This week was Iwasaki’s first time showing Commentary, and the pair proved to be a beautiful match. Iwasaki piloted Commentary to scores of 86.5, 88.5, and 90.5 over fences.

“He was so fun to ride,” said Iwasaki of the 10-year-old Warmblood gelding. “He put his best foot forward every time we went into the ring. I actually just rode him for the first time earlier this week. I’ve seen him show a few times with his owner, Ella Bikoff, and I’ve always really liked him.

“It’s challenging to get on a new horse and try to do the best that you can,” she continued. “I think that only makes you a better rider, to be able to get on different horses and ride them the way they need to be ridden.”

Iwasaki is no stranger to Capital Challenge and the winner’s circle. The rider has successfully been competing at this event since she was riding ponies.

“I think it’s super special to win here,” commented Iwasaki. “To be the overall grand champion is an amazing award. I’ve seen a lot of people that I really look up to get that award, so I’m really excited.”

For the Grand Junior Hunter 3’6” Championship, sponsored by Shadow Ridge, Iwasaki was presented with the Spontaneous Perpetual Trophy, donated by the Listrani Family. Iwasaki was also given the Best Junior Rider Award, sponsored by Karen Healey.

Finishing as the reserve champion in Small Junior Hunter 16-17 was Libbie Gordon aboard her own High Society.

The champion of the Small Junior Hunter 3’6” 15 and Under division, sponsored by New England Farm, was Sterling Malnik on her own Coronation. Ariana Marnell piloted Ocean Road, owned by Marnell Sport Horses, to the reserve champion title.

The EMO Best Trip of the Show for the Junior Hunter 3’6” went to Sterling Malnik and her own In Writing with an impressive score of 92.

Later in the day, Iwasaki also topped the $5,000 WCHR Junior 3’6” Challenge on Bikoff Equestrian LLC’s Cabrio. The pair won with a high score of 87.33.

The pair earned two blue ribbons and one second place in the division. Propp piloted Arabesque to a high score of 87.25 to win the handy stake on the second day of competition.

“We won the under saddle on the first day which was really positive,” explained Propp. “I felt a little pressure the second day, but I wanted to go easy on myself and she ended up being really awesome. Her attitude when she gets to the ring is great. She never has a bad attitude about anything. She is always excited to work and do her job, which I think are really special qualities to have in a horse.”

“This is such a prestigious show, so it means a lot to win,” said Propp. “This is Arabesque’s first indoors, and she really rose to the occasion and jumped super. I stuck to my plan, and it all went better than I could have expected. Arabesque is only eight years old, so I was really proud of her. Earlier in the year we also won at Junior Hunter Finals, and that was her first Junior Hunter Finals. There were a lot of firsts this year!”

Reserve champion in the Junior Hunter 3’3” 14 and Under division went to Olivia Sweetnam aboard Sunset View Farm LLC’s Hobbs Lane.

Little’s success continued with Belgravia when they earned the top prize in the $2,500 WCHR Junior 3’3” Challenge. The duo earned a score of 88 to win the class.

The Stewart-Warner Cup, given in memory of Laurie Gilbert Stewart and Mary Warner-Brown by Donald E. Stewart, Jr. and Louise W. Serio, was awarded to Djuna Lauder.

Grand Champions Run in the Family for Alexa Karet

After watching her mother Laura Karet win the Grand Adult Hunter Champion award with Per Se on Thursday, Alexa Karet of Pittsburgh, PA, took home the top prize of her own when she and Catbird, owned by Glade Run Farm LLC, finished as Grand Children’s Hunter Champions, sponsored by Mary Jane King, on the final day of the 2021 Capital Challenge Horse Show.

Alexa Karet, 14, and Catbird won an over fences class and the under saddle to finish as Children’s Hunter 14 & Under champions, sponsored by Mr. & Mrs. Gary Duffy and Little Brook Farms, Inc. as well as Grand Champions. Karet was presented with the Laura Pickett Memorial Trophy donated by Julie Karpan, and she also won the Best Children’s Hunter Rider Award, sponsored by Wild Sky Farm & The Nelson Family. Payton Flanders rode her own Conlaro to the reserve championship, as well as the win in the WCHR Children’s Hunter Challenge, sponsored by Stephanie Bulger and MeadowView.

Karet only got the ride on Catbird in March 2021, but she fell in love with the striking 11-year-old Warmblood gelding by Hochadel immediately. The pair also started winning right away, taking championships in Aiken, Traverse City, and Middleburg.

“He is one of the most amazing horses to ride. He is so smooth, and his jump is really soft, so it feels like you’re floating,” she described. “What I like most about him is his personality. His barn name is ‘Cookie,’ which is perfect for him because he is so sweet. He is also really smart, and you can tell that he studies and thinks through things.”

Karet last showed at Capital Challenge Horse Show in 2019, when she won the Medium Pony Hunter championship with Astro Boy, but this is her first grand championship.

“To be grand champion here feels almost unreal, like a dream!” she exclaimed. “That’s especially because I get to share the experience with my mom, who was also grand champion in her division. I am beyond grateful to her, and the amazing team that pushes me to be my best and made this all possible: Tom Wright, Mitchell Robinson, David Laks, and our grooms Gus, Pica, and Omar. I also want to say thank you to the Ingram family for connecting me with Cookie. And of course, I am so grateful for Cookie who has taught me so much, and always brightens my day.”

The Children’s Hunter 15-17 champion was Exceptional, ridden by Caroline Hoover for Kristie Parciak. They also won the Best EMO Children’s Hunter Trip of the Show with an 86.5, and Hoover was presented with the Stewart-Warner Cup for Children’s rider. It is given in memory of Laurie Gilbert Stewart and Mary Warner Brown by Donald E. Stewart, Jr. and Louise W. Serio. The reserve championship went to Captured, owned by ridden by Skylar Sneathern.