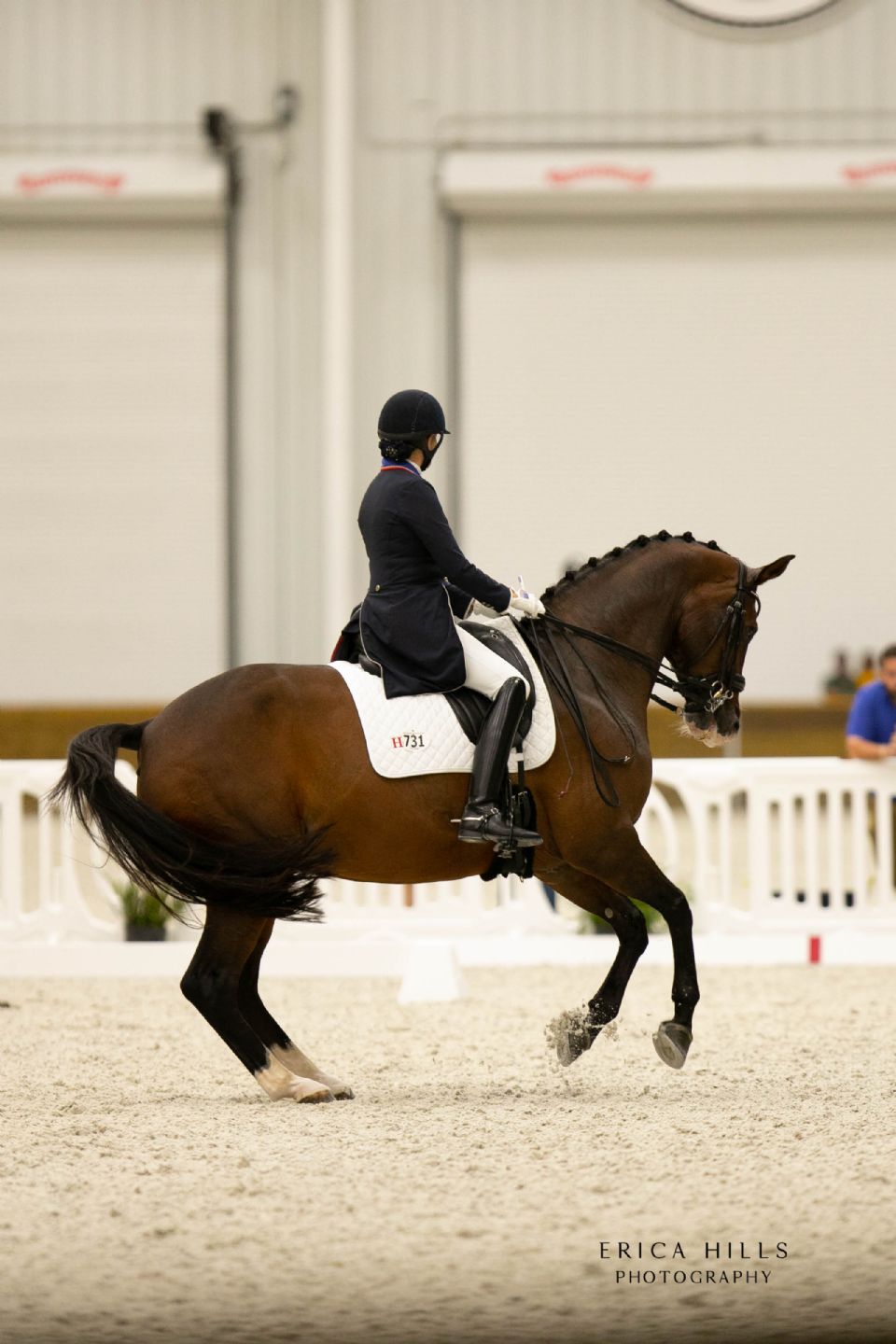 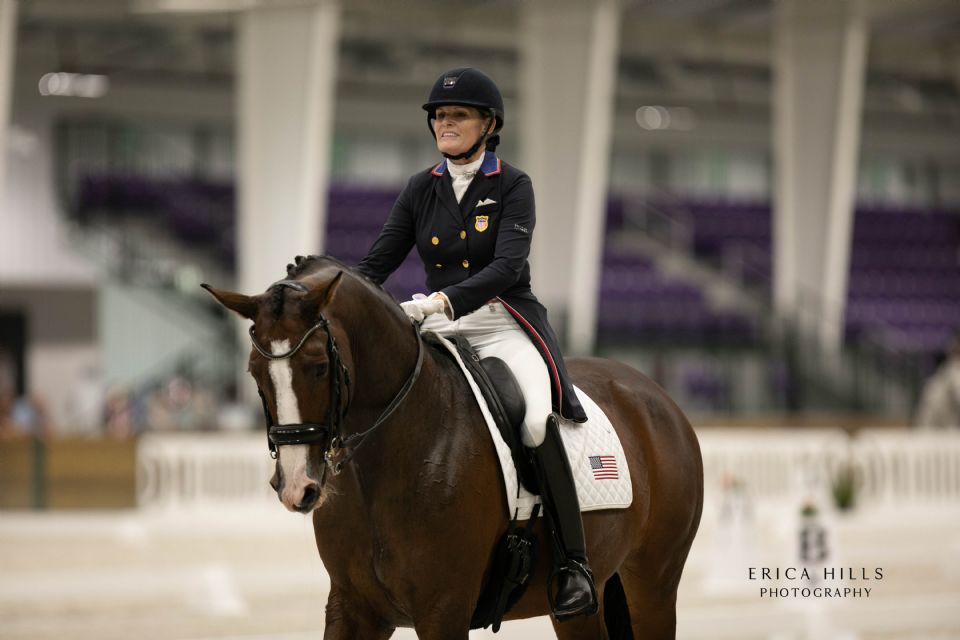 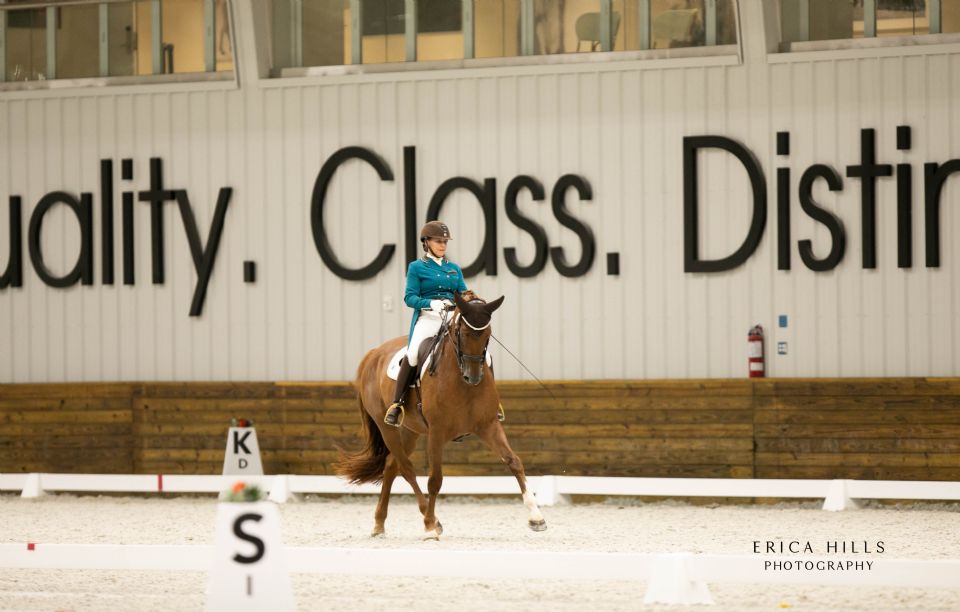 The winners of the FEI Intermediate 1 were Erin Brinkman and Fenomenal JW.
Photo by Erica Hills Photography 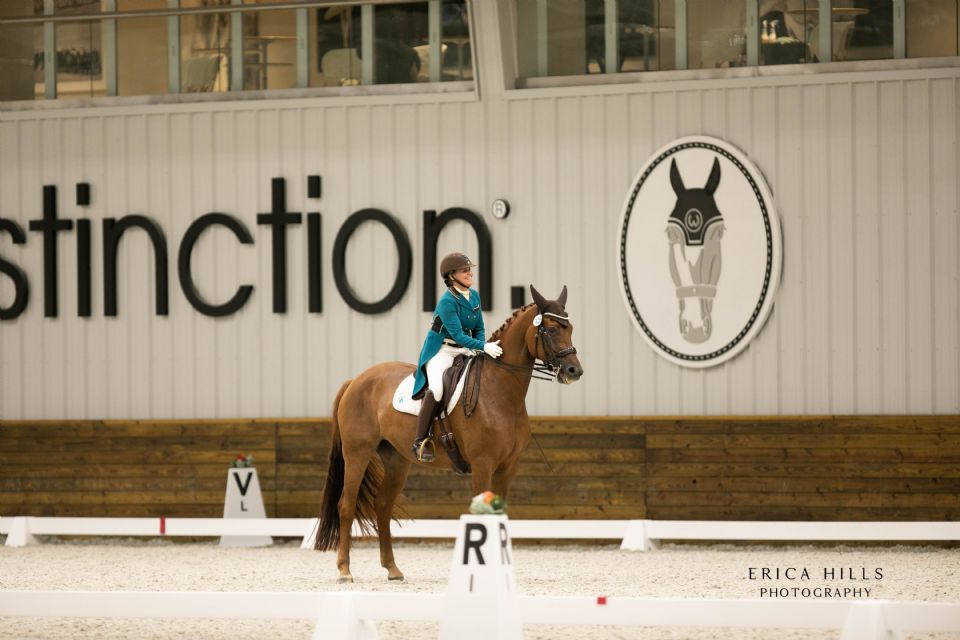 Erin Brinkman and Fenomenal JW were all smiles after their test.
Photo by Erica Hills Photography

It was a nice return to the show ring for Holzer, of Wellington, Fla., and Havanna 145, who last competed at the World Equestrian Center Dressage III competition in April. Havanna had been working with her owner, but when Fellows was away for the summer, Holzer took back the ride.

Holzer has been riding Havanna for six years. “We’ve been really happy with her progress,” she said.

Coming into this week’s competition, Holzer arrived on Tuesday to give her horses a breather from the weather and work in the air-conditioned arenas at WEC. “It’s great to feel her fresh and so great to be in the air conditioning!” said Holzer. “We have been riding in the heat all summer and you don’t have much of a horse in it. Here, you can really work them, and they feel fit, fresh and happy. It’s been really such a lovely experience. What a facility this is; it’s unreal.”

Holzer and Havanna, a 14-year-old Hanoverian mare by Hochadel x Rodgau, received a score of 72.391% in the Grand Prix.

Holzer recounted, “She was a little too fresh on her first diagonal but was great for the rest so I’m pretty thrilled. We have been working on piaffe and passage. I was really excited about her changes being straight and forward; a lot of the test I loved.

“I’m very lucky to be involved with Diane [Fellows],” she continued. “She is so supportive and always thinking of me ahead of herself. When she saw the score, she said, ‘I guess I’m not getting Havanna back.’ We were joking about that!”

Holzer plans to return with Havanna to compete in the FEI Grand Prix Freestyle at the World Equestrian Center Dressage IV CDI-W in October. After attending the Tokyo Olympic Games to watch and help students, she returned with a renewed sense of determination and devotion to top sport.

“Going to the Olympics really made me aware that the top riders in the world really are able to train and compete all the time,” she said. “We weren’t able to go to Europe this year for many reasons, so [being at WEC] has been really super. It’s good that there is a lot going on here. It’s not like a normal national show where it’s quiet with no atmosphere. Here there is music playing from an incredibly strong sound system; there are people moving around in the bleachers. There is still a lot of atmosphere. We are lucky to have the opportunity to expose horses to this, to another venue, and get them ready for international competition. They’ve got to be doing this.”

In the FEI Grand Prix, Eline Eckroth and Liberty owned by Hannah Smith finished second with 67.609%. In third place were Ivo Juhrend and Karen Young’s Eye Catcher, who received a score of 67.500%.

Erin Brinkman and Fenomenal JW picked up their first FEI Intermediate 1 victory with a score of 74.118%. After a top-three performance in the Prix St. Georges at the U.S. Dressage Festival of Champions as a seven-year-old with Lindsey Holleger, Fenomenal JW made her way to Brinkman’s Valhalla Farm in Wellborn, Fla., in March 2021. Holleger is a former student of Brinkman’s, having won a USDF Gold Medal with a horse that is a half-brother to Faithkeeper, the mount that entered The Century Club with Brinkman’s mother Jean on Friday at at the World Equestrian Center Dressage XIV show.

Fenomenal JW had six months off before she came to Brinkman, and this was only the second I-1 class of the horse’s career. Fenomenal JW was bred in Georgia at Julia Whitfield’s Whitfield Hanoverians. The 17.2 hand-high chestnut mare by Furst Romancier x Walt Disney is “a big, gentle giant,” said Brinkman, who is just 5’3”.

“I’ve had a lot of 17-hand FEI horses, and maybe it was prep for her,” acknowledged Brinkman. “She fits me, which is surprising. She’s a typical redhead, very sensitive, thin-skinned; she only needs a little tiny spur. She’s got a lot of go and fire. She wants to do it well. I think what we struggled with at first was just teaching her to breathe and relax. I’ve done a lot of natural horsemanship with her to get her more trusting [of me]. This week she cleared her lungs early in the ride, whereas for a long time it was 20 minutes into the ride. She was so soft this weekend.”

Brinkman will aim to do the CDI Small Tour at the WEC CDI-W in October if Fenomenal JW feels strong enough.

“I absolutely love this horse,” said Brinkman. “She really is phenomenal. Her name just fits. She’s brilliant to ride, so generous, so kind. I see her as a really talented grand prix horse. She’s only nine, so I want to take my time and develop her next year, figure out how to ride her in the ring and go from there. She actually doesn’t have a weakness; that’s the cool thing about her. She could do every movement for an eight if I have enough time to develop that and we find our groove. Last week we couldn’t really do a canter zigzag and today we got an eight on it. She is learning all these things and coming along.”

This was Brinkman’s first time competing at World Equestrian Center – Ocala, but she made the decision to attend when she saw that classes would be held in the air-conditioned indoor arenas.

Brinkman noted, “I loved showing in the air conditioning. I don’t think I could have pulled the scores [outside]. By the time you get in there, the horse is overheated, you’re overheated, and you can’t quite go for the same level of fire. Today I brought a little more fire and collection.”

Second place in the FEI Intermediate 1 went to Jessica Howington and her own J’Adore with a score of 73.676%. Nikki Greenburg and her own Dario D were third with 70.882%.