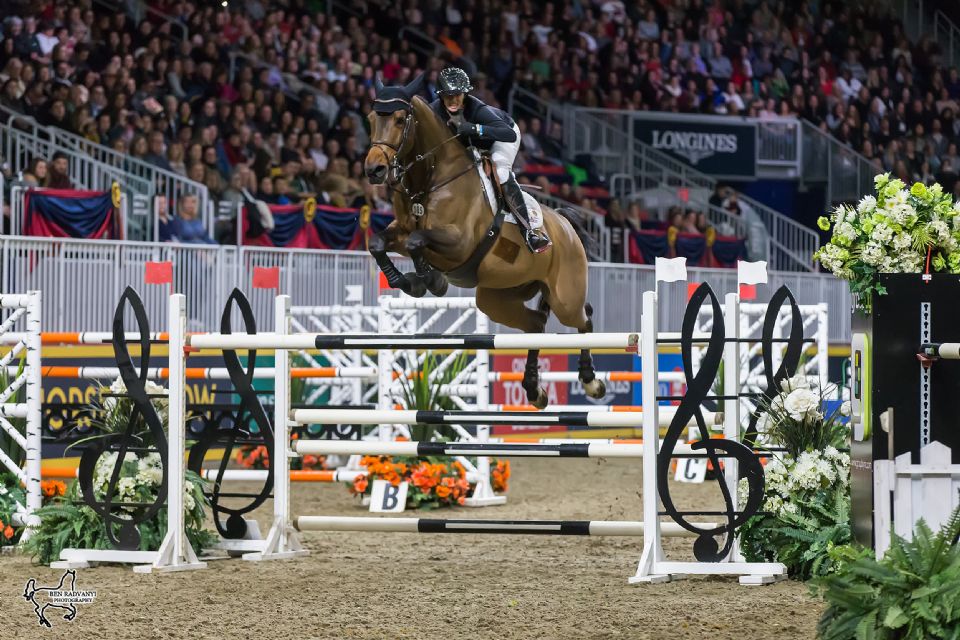 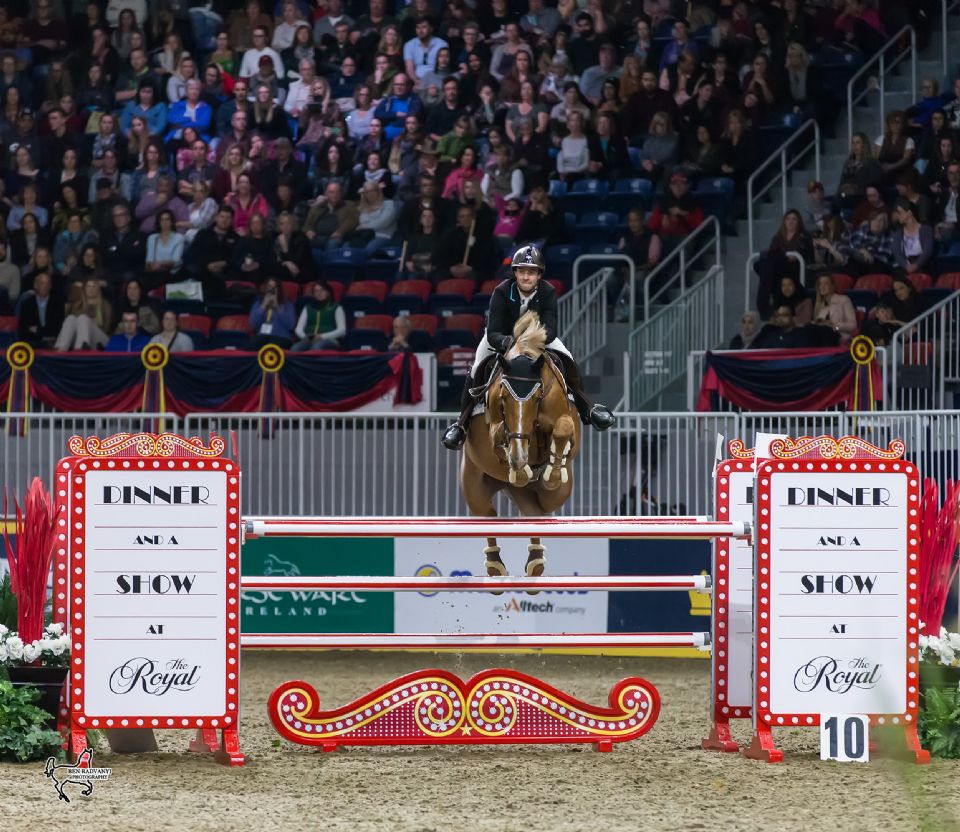 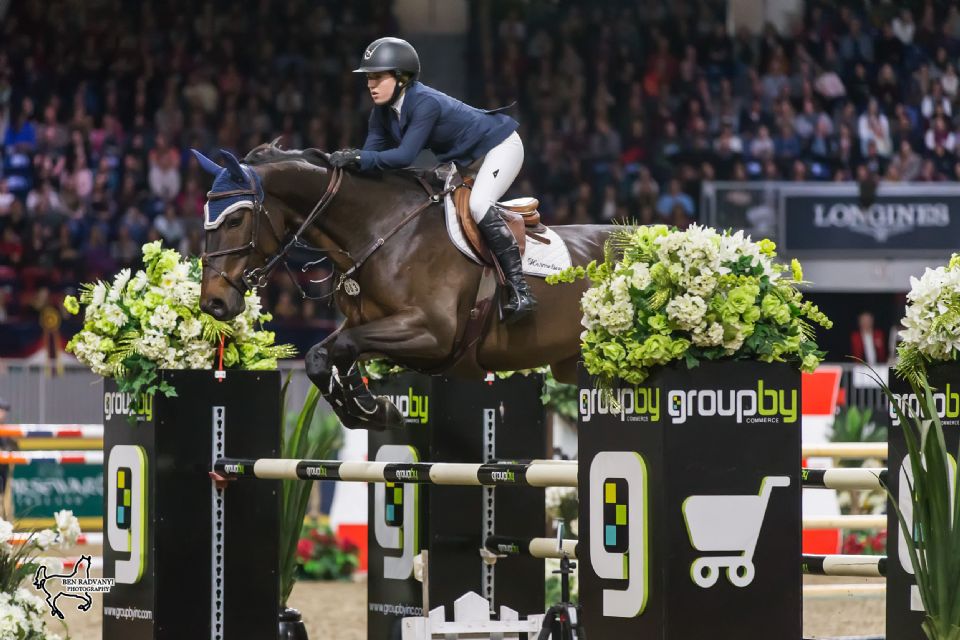 Ali Ramsay of Victoria, BC, was third in the 2017 Canadian Show Jumping Championship riding Hermelien VD Hooghoeve on Saturday, November 4, at the Royal Horse Show in Toronto, ON.
Photo by Ben Radvanyi Photography

Sitting third following Friday’s opening round of competition with 1.25 penalties, Millar returned for a two-round final in front of a full house in the Ricoh Coliseum on Saturday evening.  Piloting her 2016 Rio Olympic Games mount, Heros, Millar jumped fault-free over the tracks set by Brazilian course designer Guilherme Jorge to move to the top of the leaderboard and win her first national championship title.

“There are very few things that I get as excited about as the Royal Agricultural Winter Fair,” said Millar, 40, whose father, Ian Millar, has won a record 12 Canadian Show Jumping Championship titles in his illustrious career.  “It has been such a big part of my life for so long that I have wanted this for probably the whole time I have been alive!  It is so important to me and to Canada; the stands are filled with Canadians who love the sport, and it has always been so prestigious to win.”

Francois Lamontagne, 33, of St. Eustache, QC, jumped up from fifth in Friday’s standings to a second place finish behind Millar with a total score of 3.73 riding Chanel du Calvaire.  Ali Ramsay, 25, of Victoria, BC, piloted Hermelien VD Hooghoeve into third with a final score of 4.24 while Nicole Walker of Aurora, ON, celebrated her 24th birthday with two clear rounds aboard Falco van Spieveld to finish fourth overall with 5.34 penalties.

Isabelle Lapierre, 38, of Levis, QC, was close behind with 5.86 penalties for fifth riding Cescha M.  Laura Jane Tidball, 39, of Langley, BC, rounded out the top six riding Concetto Son for owner Thunderbird Show Park with 9.06 total penalties.  Ten-time Canadian Olympian Ian Millar was poised to defend his Canadian Championship title, but three rails down on Saturday night moved his daughter into the spotlight.

“I've done this class many times and, by far, this was the biggest and most difficult Canadian Championships that has ever been built,” said Amy Millar of Jorge’s tracks.  “I think that is a reflection of how strong our Canadian riders are.  It's the first time that our starting field has been this strong, and that’s pretty exciting for Canadian show jumping.”

Of her performance in the 2017 Canadian Show Jumping Championship, Amy Millar noted, “I just had to keep telling myself to ride well, jump clean, and stay focused.  Every time winning entered my mind, I pushed it away and thought, ‘just concentrate on what you know; ride well and jump clean rounds’.  And obviously it worked!”

“Heros is owned by a group, AMMO Investments,” explained Amy Millar.  “It’s Ann Matthews and her daughter, Karen Sparks, and Patty Overlund and Patrick O’Brien, who are mother and son, and my family.  It's a group of people that I've known a long time and really love; they are all good friends of mine, and I can’t thank them enough for their support.”

Based on their performances in the Canadian Show Jumping Championship, Amy Millar and runner-up Lamontagne will move forward to the Royal Horse Show’s international division, beginning Tuesday, November 7.  They join fellow Canadian athletes Tiffany Foster of North Vancouver, BC, Keean White of Rockwood, ON, Vanessa Mannix of Calgary, AB, Erynn Ballard of Tottenham, ON, Ali Ramsay of Victoria, BC, and Ian Millar of Perth, ON, who were all pre-qualified based on their world ranking.

The $150,00 Longines FEI World Cup™ Jumping Toronto on Wednesday evening, November 8, highlights international show jumping competition at the Royal Horse Show, and is a qualifying event for the 2018 Longines FEI World Cup™ Jumping Final in Paris, France, next April.  Joining the Canada’s top contenders will be a star-studded lineup of international riders, including the current number one and two ranked riders in the world, Kent Farrington (USA) and McLain Ward (USA).