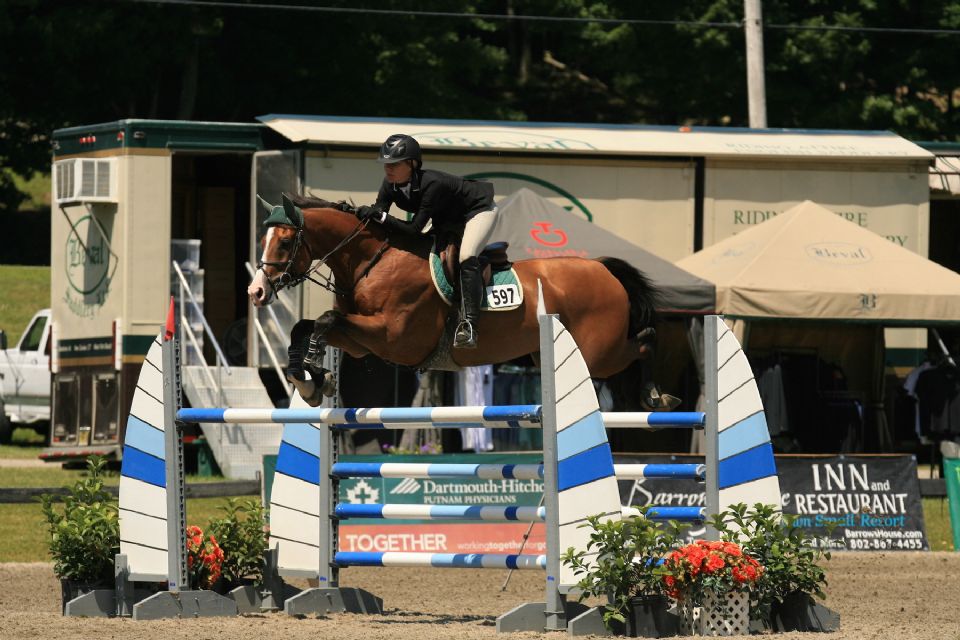 Amanda Starbuck and Carte Blanche on their way to victory in the $10,000 Kate Spade Welcome Stake, presented by Manchester Designer Outlets, on July 16 at the Vermont Summer Festival in East Dorset, VT.
Photo by David Mullinix Photography 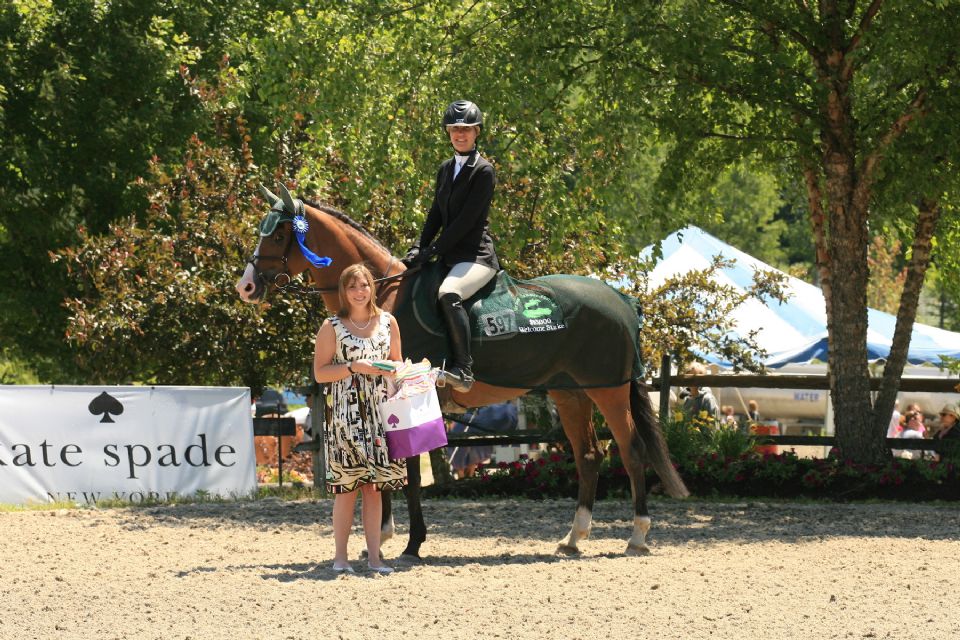 Starbuck and Carte Blanche, an eight-year-old Dutch Warmblood gelding (Lupicor x Wildcard) were the fastest out of four double-clear rounds. From the third spot in the original order, Carte Blanche, improved upon his second-place finish in Sunday's $30,000 Battenkill Grand Prix with Starbuck in the irons.

“It was just challenging enough to see some rails come down, but was a great course to prepare for Saturday's grand prix,” said Starbuck. “My horse is still young and I could feel him gain a lot of confidence in the ring today.”

Starbuck's jump-off time of 40.57 seconds was quickly contested by a clear effort from Kimberly Mulligan-Mangione of Milford, CT, aboard her own Psalms 23. Their 46.77-second ride sat second until Jimmy Torano of Wellington, FL and his own Daydream posted a time of 46.29 seconds, taking the red ribbon and bumping Mulligan-Mangione to third.

Cassandra Orpen of Weston, CT and Casis, owned by SCCA Ventures, took fourth with a clear jump-off ride in 48.04 seconds. Matthew Metell of East Falmouth, MA, and Cyon Z, owned by Wolver Hollow, pulled a rail in the jump-off, but their time was the fastest of the day in 38.55 seconds for fifth.

Starbuck and Carte Blanche produced the win thanks to a long-time partnership. She found the gelding she affectionately calls Cartier at a dressage barn as a yearling. He was bred by Carlos and Karin Jimenez, who have a reputation for producing talented young stock.

“I watched him and he was so cute, but too small,” said Starbuck.

Carte Blanche, who stands at roughly 15.2 hands, didn't appear to be the horse Starbuck could train up to the grand prix level, but she couldn't stop thinking about his willingness to try. “Six months after I saw him, I called to see if he was still available. I vetted him that week and brought him home,” Starbuck recalled. “He lived in a field for a year and then I broke him myself.”

When Starbuck introduced Carte Blanche to the show ring in five-year-old jumper classes, she realized just how impressive her young horse was. “At first, I figured I could turn him into a child/adult jumper and make my money back, but I knew he would be a star when I started jumping him,” she said. “Whenever he would have a rail down, it was because he didn’t know where to put his body yet. He would land and shake his head. He was disappointed with himself.”

Impressed with Carte Blanche's natural competitive nature, she has plans for him to compete at the 1.45m and 1.50m level in Florida this winter. “He has been amazing and tries to win every time,” she said. “He's classic, athletic, very tidy up front and has always been that way.”

Starbuck's experience at the Vermont Summer Festival began when she was only 17 and Starbuck Equestrian has been spending time in Southern Vermont each summer since. “I went to UVM, so I wanted to check out this show, came with my horse to do the Junior Jumpers and loved it,” she said. “Now we bring our whole barn every year.”

In addition to their share of the prize money, the top two finishers were presented with awards from Manchester Designer Outlets in Manchester, VT. Starbuck – a self-proclaimed girly girl – was pleased to earn a $1,000 gift card from Kate Spade. For second-place honors, Torano was awarded $100 to Polo Ralph Lauren.

Encouraged by Carte Blanche's performance early in the week, Starbuck is now focused on pointing him toward the big prize this Saturday in the $30,000 Otter Creek Grand Prix.