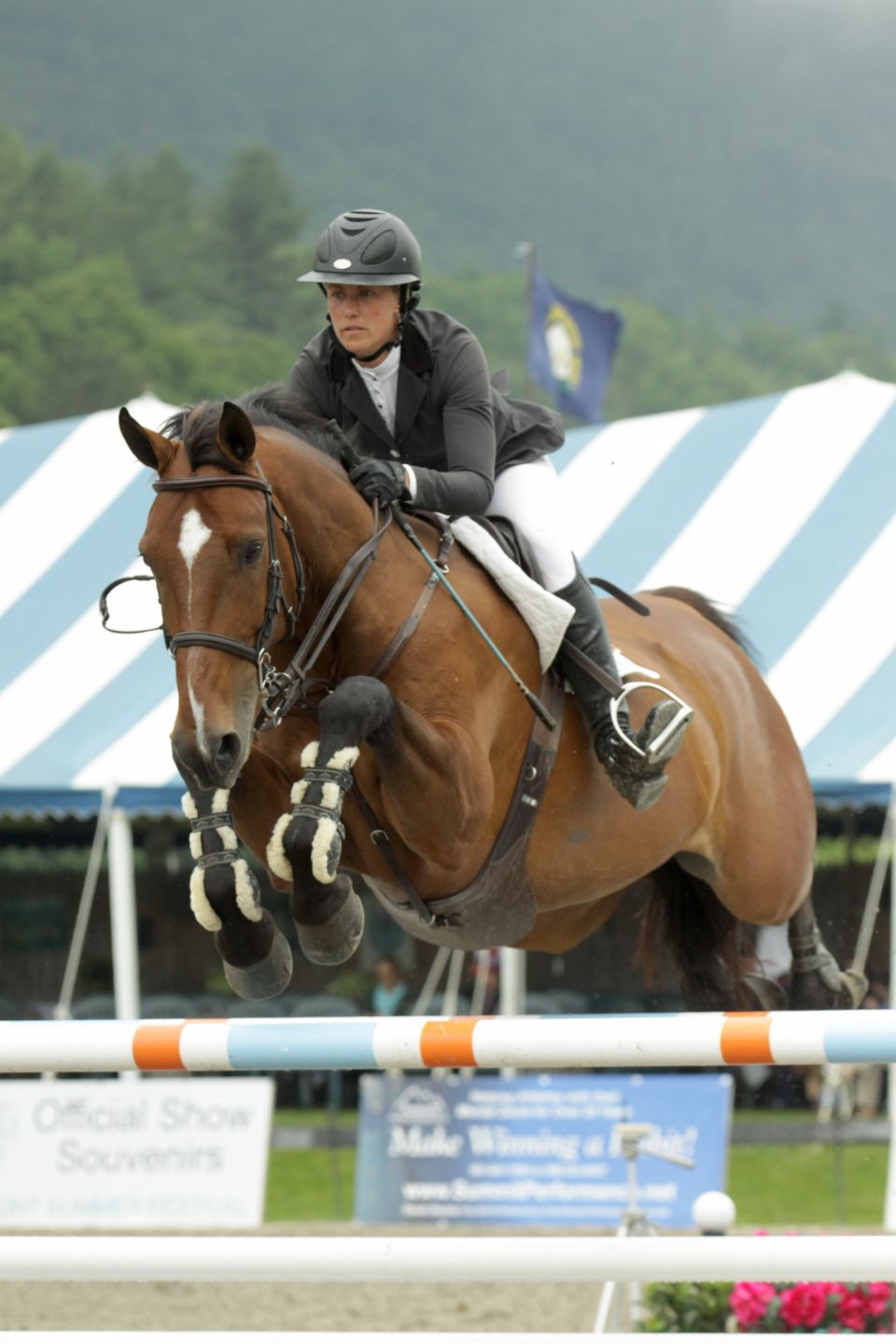 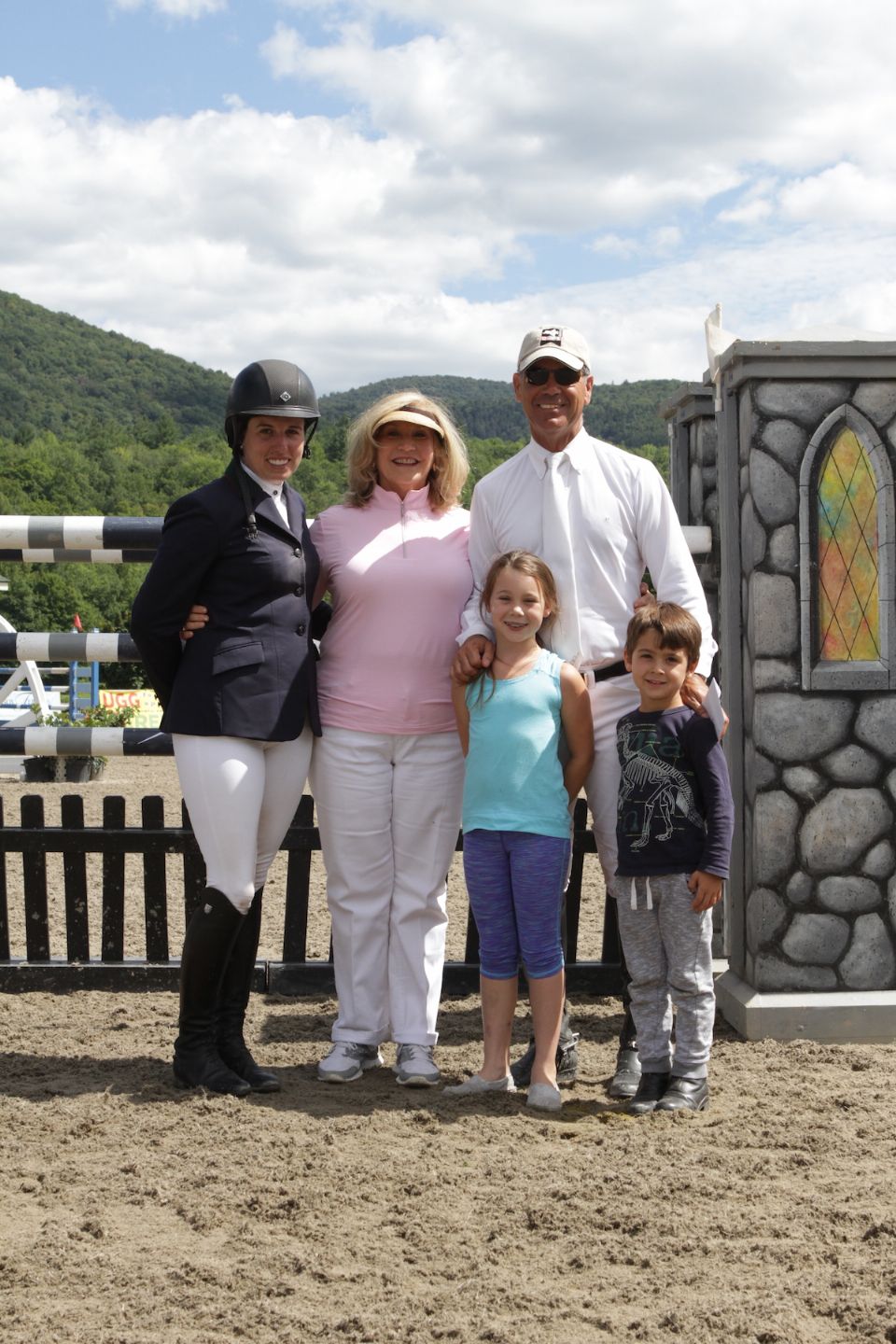 Julie Welles and Jimmy Torano are presented with their Sir Ruly, Inc. Awards at the conclusion of the Vermont Summer Festival by members of the Torano family, including Raul “Ruly” Torano's wife Maria Teresa.
Photo by David Mullinix Photography

For the second year in a row, Flint accumulated enough points to dominate the Sir Ruly Inc. Open Jumper Standings each week throughout the six-week circuit in Vermont. After kicking off Week 1 with a win in the $10,000 New Balance Welcome Stake, presented by Manchester Designer Outlets, aboard VDL Wittinger, Flint went on to win the $30,000 Vermont Summer Special Grand Prix, presented by Johnson Horse Transportation, aboard Superbad.

Her repeat performance during Week 2 yielded a blue ribbon for Flint and Child Z in the $10,000 Brooks Brothers Welcome Stake, presented by Manchester Designer Outlets, and a win in the $30,000 Battenkill Grand Prix, presented by The Inns at Equinox, with VDL Wittinger.

As the leading rider at this year's Vermont Summer Festival, Flint took home $5,000 for the honor. A regular competitor in Vermont, she admits that bonus money is an added perk for riders and plays a role in their loyalty to horse shows like the Vermont Summer Festival. "We had a great couple weeks [in Vermont] and they did a really nice job with the improvements to the footing this year," said Flint, who finished the circuit with 147 total points towards her Sir Ruly, Inc. Award.

Consistent Open Jumper placings helped Jimmy Torano of Wellington, FL, to collect $2,000 for his third-place finish and 121 points in the final standings.

For the past nine years, the Sir Ruly, Inc., Open Jumper Awards have offered $10,000 in bonus money to the top show jumping competitors at the Vermont Summer Festival. Initiated by Raul "Ruly" Torano, uncle of Jimmy Torano, the awards now serve as a legacy of his incredible generosity and support for the annual Vermont Summer Festival and the Manchester community at large.

The Sir Ruly, Inc., Open Jumper Awards reward the show jumping riders who consistently place at the top of the three open jumper classes held each week of the Vermont Summer Festival: the $5,000 1.40m Open Jumper, the $10,000 Open Welcome Stake, presented by Manchester Designer Outlets, and the $30,000/$50,000 Grand Prix. Riders accumulate points by placing in any of the three classes, with the $10,000 in bonus money awarded to the top three finishers at the end of the six-week circuit.

“Ruly loved this horse show so much, and these awards were something that we wanted to continue in his honor,” said Torano who owns and operates JET Show Stables with his wife and amateur rider Danielle. Torano. “We have been coming to Vermont for over 20 years and we enjoy everything about it.”

The Vermont Summer Festival is New England’s largest hunter/jumper competition, and the richest sporting event based on purse in the state of Vermont. It is a proud member event of the Show Jumping Hall of Fame, the Marshall & Sterling League, and the North American League (NAL).