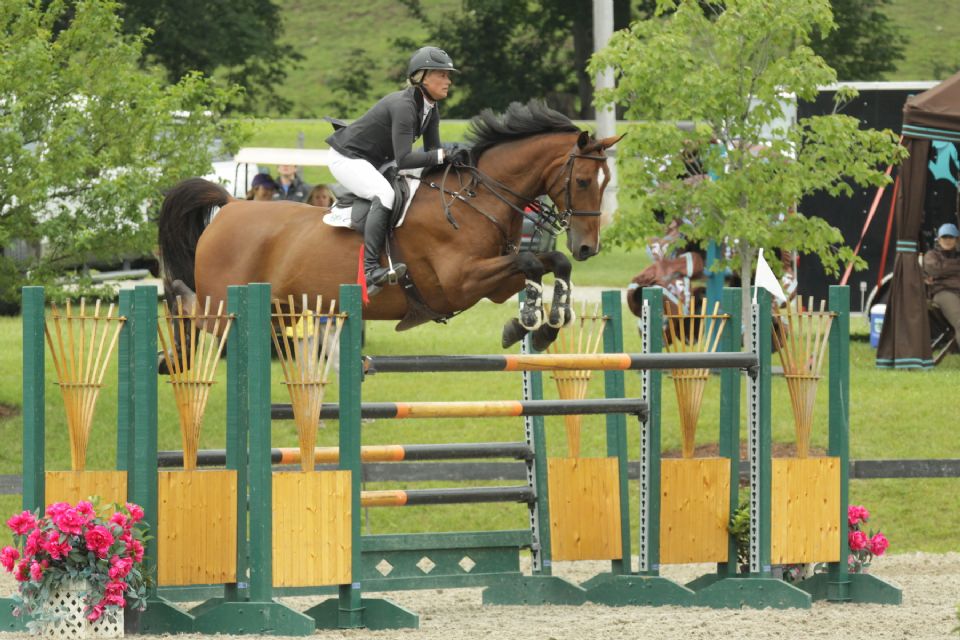 For the second year in a row, Flint rode Superbad, an 11-year-old German Sport Horse gelding (Ludwig Von Bayern x Kora) owned by The Coverboy Group, to victory in the $30,000 Vermont Summer Special Grand Prix. The pair was one of seven challengers from the 25-horse starting field to successfully conquer the first round track set by Irish course designer Alan Wade.

Riding from the fourth position in the original order, Theodore Demetriou of Huntington, NY, and Wolver Hollow's Conntador were the first to jump clear. Three trips later, Flint guaranteed the crowd a jump-off with VDL Wittinger, her winning mount from Thursday’s $10,000 New Balance Open Welcome Stake, presented by Manchester Designer Outlets. Jackie McQuade of North Salem, NY, was the next rider to add her name to the list with Copilot, followed by Flint and Superbad. Leann Kelly of Valatie, NY, on Honorway Farm LLC's Leander made it five, while Child Z, owned by The Party Girl Group LLC, gave Flint her third jump-off contender. Jonathan Corrigan of Southampton, NY, and Aries rounded out the jump-off field for Noel Love Gross.

Demetriou pushed a rail from the cups coming into the final line of the jump-off before Flint laid down a clear round in 37.26 seconds with VDL Wittinger to set the time to beat. In the end, Flint was also double clear riding Superbad and posted the winning time of 35.15 seconds to relegate VDL Wittinger to second.

Flint and Superbad showed off the gelding's signature chip into the double combination that started the final line of the jump-off.

“With most horses you move up to the jumps, but with him you have to wait and add,” explained Flint. “He is super scopey and he can jump anything. He was just playing around out there today.”

Kelly and Leander had Flint beat on the clock with a time of 34.92 seconds, but four faults saw them settle for third. Demetriou and Conntador took fourth place while fifth was awarded to Corrigan and Aries on eight faults and McQuade and Copilot were sixth. Flint rounded out the jump-off contenders in seventh place after incurring eight faults with Child Z.

“I just wanted to go slow and give him a nice ride, but he wanted to go faster and it hurt us,” said Flint of her jump-off trip aboard Child Z. “Wittinger was a little sticky in the beginning, so I didn’t go as fast as I wanted to on him, but Superbad had what it took.”

Flint added Superbad to her string at the end of his five-year-old season and won the Young Jumper Championship the next year.

“He's always fighting you a little bit, but he loves to run and jump,” said Flint of Superbad, who was named after the 2007 hit comedy film.

Saturday's $30,000 Vermont Summer Special Grand Prix, presented by Johnson Horse Transportation, was the only class that Superbad jumped during the first week of the Vermont Summer Festival. It’s a strategy that is paying off for Flint.

“We did the same thing last year, saved him for Saturday and won this grand prix then, too,” she said.

While Flint was honored with prizes for her win, the Vermont Summer Festival also recognized Superbad’s groom with the weekly Grand Prix Groom Award. In recognition of his hard work to prepare Superbad for grand prix competition, Marco Turcios was presented with a monogrammed jacket and coolerette from sponsor Glenn Geary of Horsewatch.