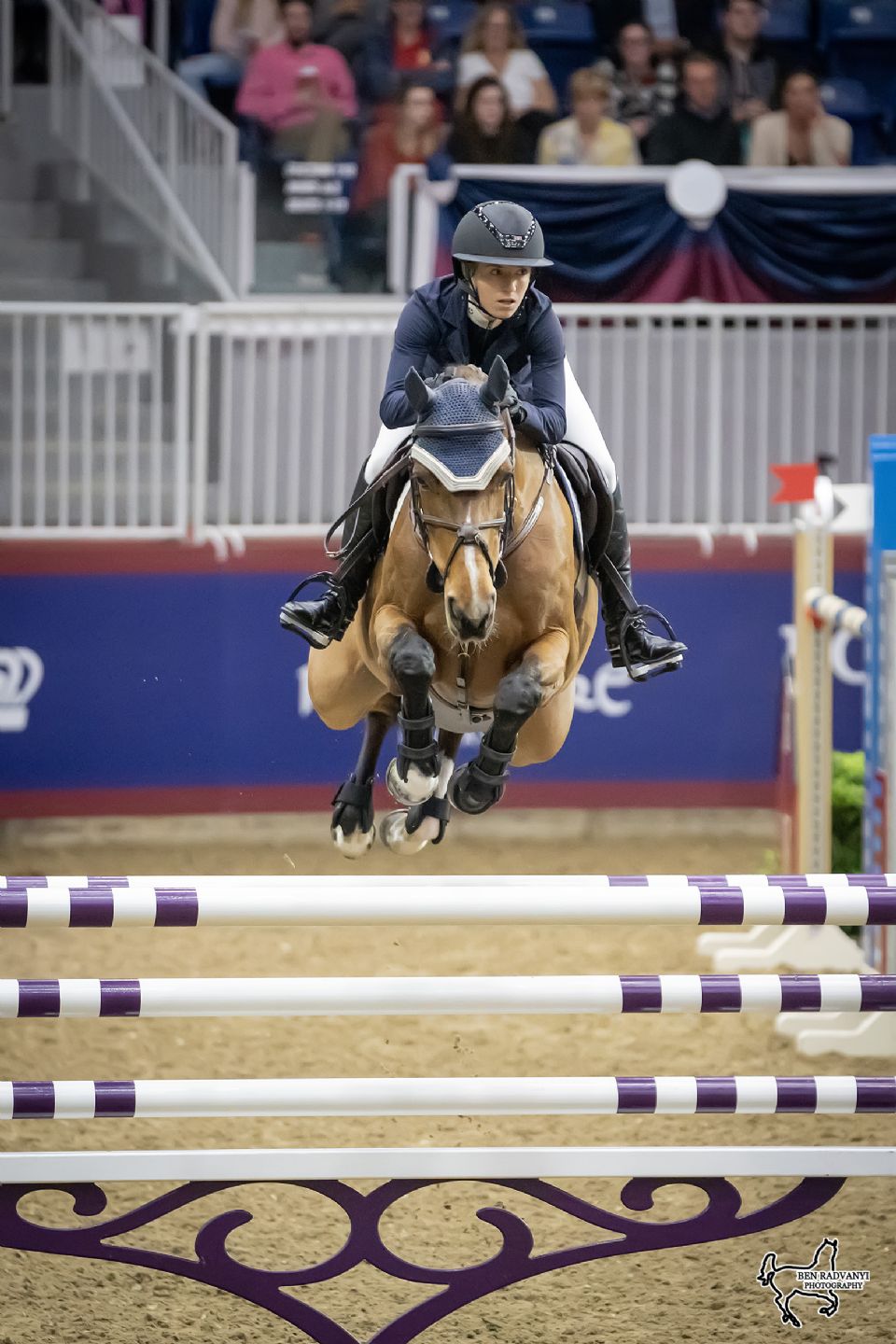 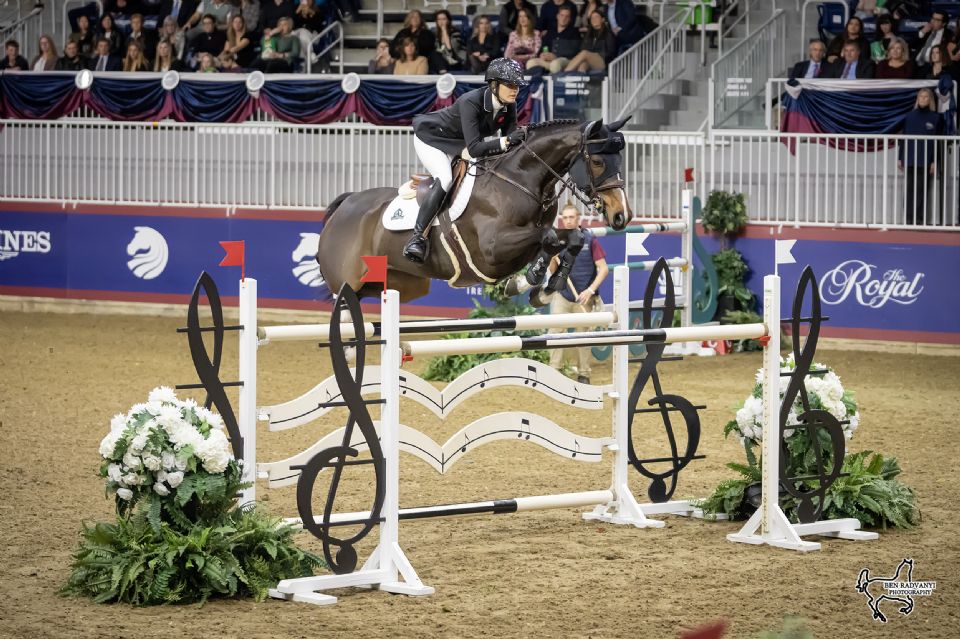 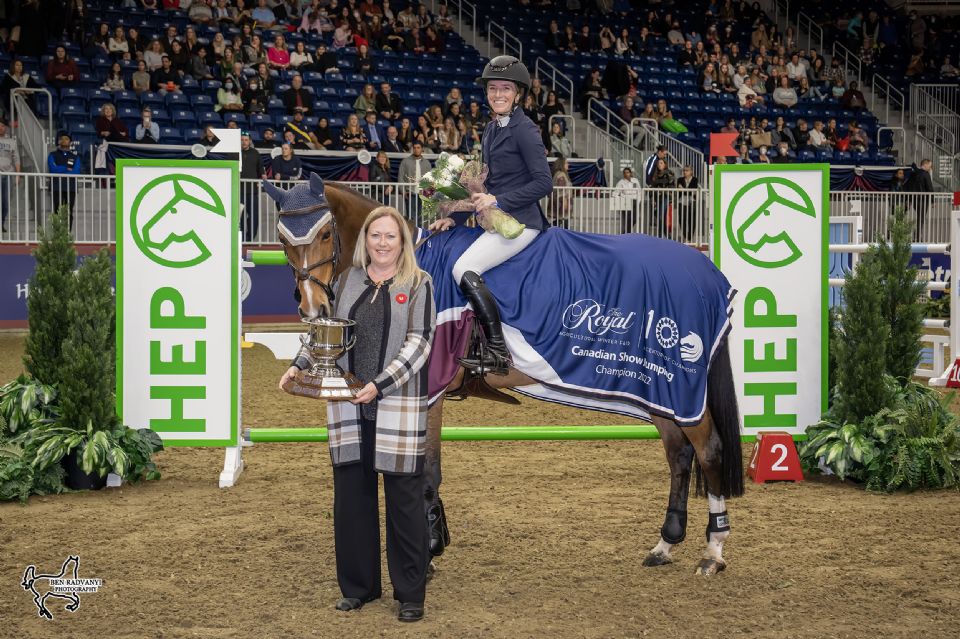 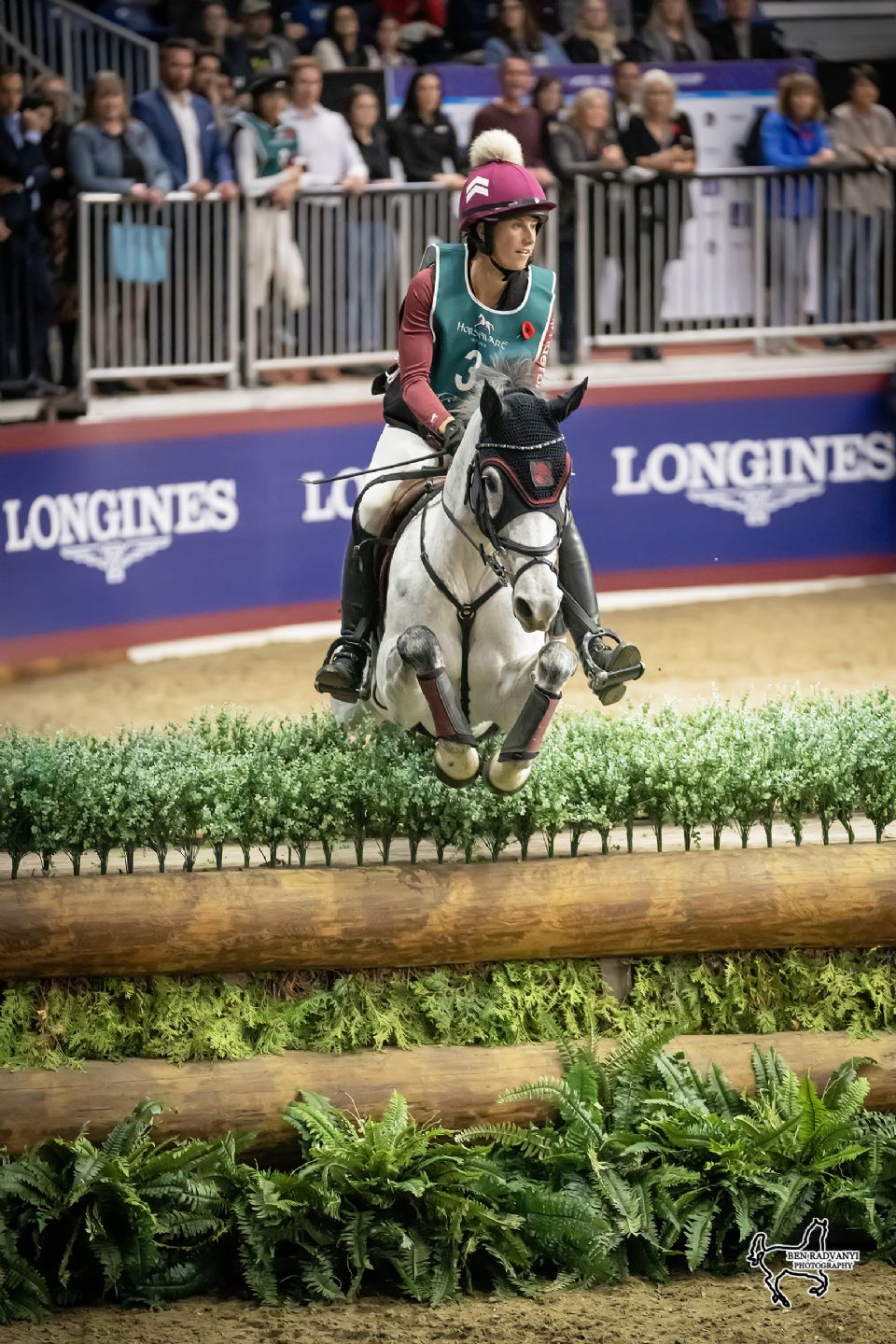 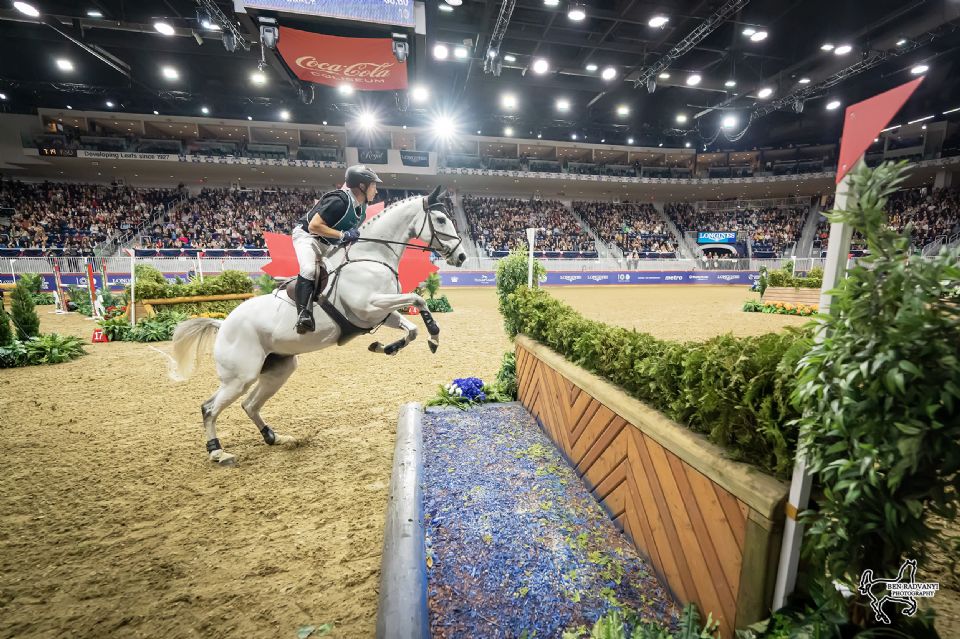 Ali Ramsay of Victoria, BC, claimed her first Canadian Show Jumping Championship title on Saturday night, November 5, in front of a packed house at the Royal Horse Show, held as part of the 100th Royal Agricultural Winter Fair in Toronto, ON.

The $125,000 Henry Equestrian Canadian Show Jumping Championship was held over two phases on Friday and Saturday nights.  Having competed for $25,000 in prize money during the opening speed round on Friday, riders returned to the Coca-Cola Coliseum in reverse order of standing to tackle the $100,000 two-round finale.  Ali Ramsay won Friday’s opening speed round, earning the advantage of being the final competitor to contest Saturday’s course.  She demonstrated the same composure that put her into the lead, delivering another clear performance with Bonita vh Keizershof Z.

“I thought the course rode pretty straightforward in the sense that there weren’t really questions on the striding in the lines,” explained Ramsay of the track designed by Canadian Olympic individual silver medalist Michel Vaillancourt.  “Watching everyone else maybe just reassured me of my plan.”

Carrying their scores forward, the top six riders from round one advanced to an all-deciding second round.  Ramsay was once again the last to return, knowing she could have two rails down and still claim victory.  She used up one of those fences before crossing the timers triumphantly to thunderous applause.

“She felt even better tonight, if that’s possible,” said Ramsay of the 11-year-old Zangersheide mare (Bustique x For Pleasure) owned by Ramsay Equestrian Inc.  “The whole game of this championship is consistency, and she was really good.  She felt amazing.”

Tiffany Foster, of Langley, BC, riding Northern Light, an 11-year-old Swedish Warmblood mare (Plot Blue x Contender) owned by Artisan Farms LLC, was carrying 4.12 faults at the start of the evening.  She put the pressure on with a clear round in the first phase, but a dropped a rail in the second phase brought her overall total to 8.12, forcing her to settle for the reserve championship.

Susan Horn, of Bolton, ON, came into Saturday’s competition sitting on one fault behind Ramsay.  She had two rails down with Kirlo van den Bosrand, a 12-year-old Belgian Warmblood gelding (Cardento 933 x Utrillo Z) owned by Kingsfield Farm, in Saturday’s first round to bring her total to nine faults.  Despite the setback, Horn rallied for a clear in the all-deciding second round to finish in third place.

In the end, it was Ramsay who grabbed the lead and never let go to claim her first Canadian Show Jumping Championship title.

“I was just thinking about how 10 years ago I won the CET Medal Final and that was the last time I actually won a class at The Royal,” reflected Ramsay, 31.  “I’ve jumped here probably six times in the last 10 years and had good placings but never won, so 10 years later here we are.”

While Foster, Mario Deslauriers, Amy Millar, and Sam Walker were pre-qualified for the Royal Horse Show’s international division based on their standings in the Longines World Rider Rankings, Ramsay and Horn will now join them with their top placings in the Canadian Show Jumping Championships.  They will return to compete among a star-studded line-up when CSI5*-W international show jumping begins on Wednesday, November 9.

Holly Jacks of Hillsburgh, ON, kicked off Saturday night’s competition with a thrilling victory in the $20,000 Horseware® Indoor Eventing Challenge aboard Josephine.  Jacks came into the second and deciding round sitting on five penalties in third place after Friday’s first-round effort.  After producing the second of only two clears, she shot up the leaderboard where she remained to claim the top prize.

“It’s so fantastic to be back at the Royal,” expressed Jacks, who represented Canada at the 2022 World Championships in Pratoni del Vivaro, Italy, in September and rides in memory of Zara Buren, a young rider who died in a tragic accident in 2020.  “It’s a community here, and I have a lot of students that showed up to watch me ride in memory of Zara.  It was amazing and the crowd was electric.  It was a lot of fun.”

Though many combinations ran into trouble across the track designed by renowned British course designer Captain Mark Phillips, Jacks gave an impressive preview of what is to come for her and the nine-year-old Canadian Sport Horse mare owned and bred by Donna Van Beek.

“She is a pretty exciting horse for the future,” shared Jacks.  “She’s very classy.  She’s always been a spooky horse, but I think her bravery tonight just shows that she’s going to step up to be a fabulous horse for Canada in the future.  I’m really excited to have had the opportunity to ride her here tonight.”

Friday night’s winner, Waylon Roberts, originally of Port Perry, ON, and now residing in Cartersville, GA, had an unfortunate miscommunication at one of the skinny brushes, which caused his mount CS Carrera, owned by Sher Schwartz, to run out at the obstacle, incurring a 10-point penalty.  That meant the eight-time winner of this class would have to settle for second this time around.  Three-time Olympic gold medalist Michael Jung of Germany climbed the standings from fifth to third with a great round on Renegade, who was borrowed from owner Emma Saraullo.

The Royal also offers numerous hospitality experiences which sell out quickly.  The Royal Terrace is available for VIP and corporate hosting while the Coliseum’s Sky Suites offer stables and groups their own private suites.  New for 2022, the Tanbark Club will offer an upscale luncheon buffet on select days.  Visit www.royalfair.org/hospitality/ for more details.