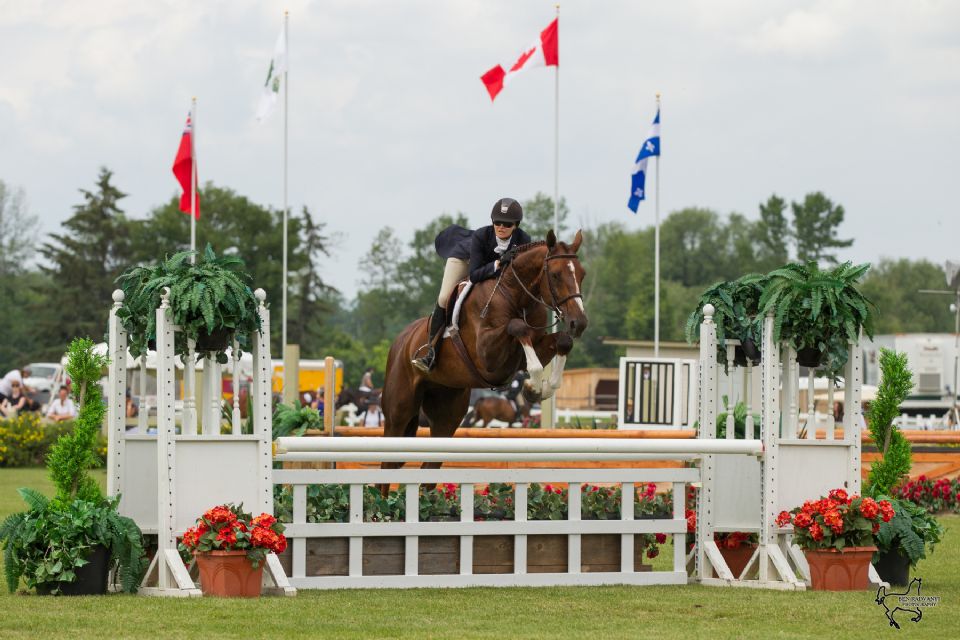 Ainsley Vince of Burlington, ON, and Magic Show, owned by Knightwood Stables, on their way to victory in the $10,000 Canadian Hunter Derby at the Ottawa International at Wesley Clover Parks on Sunday, June 21.
Photo by Ben Radvanyi Photography. 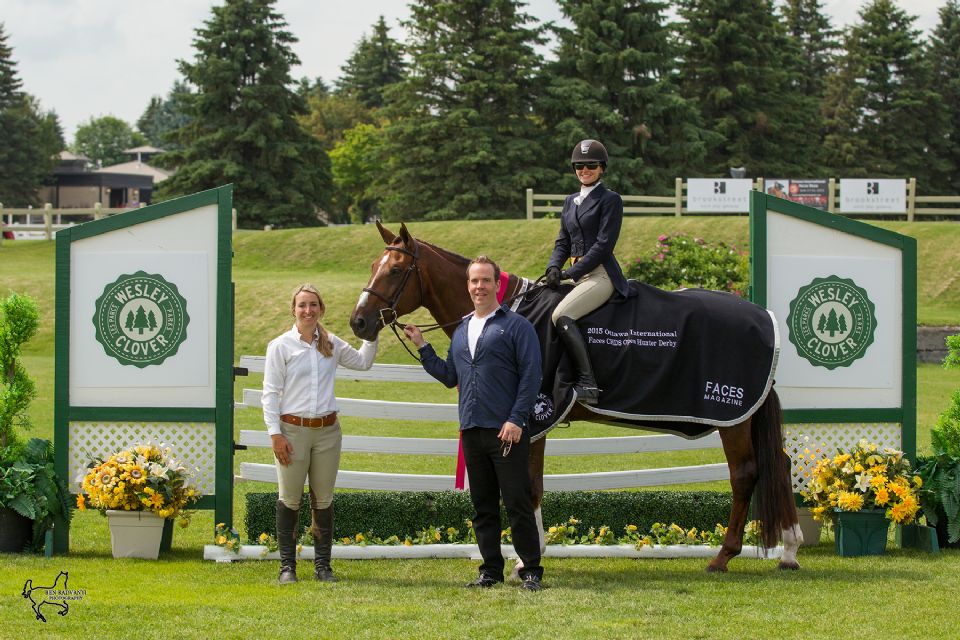 Ainsley Vince and Magic Show are presented as the winners of the $10,000 Canadian Hunter Derby, presented by Faces Magazine, by Justin MacKinnon of Faces Magazine and Karen Sparks of Wesley Clover Parks.
Photo by Ben Radvanyi Photography. 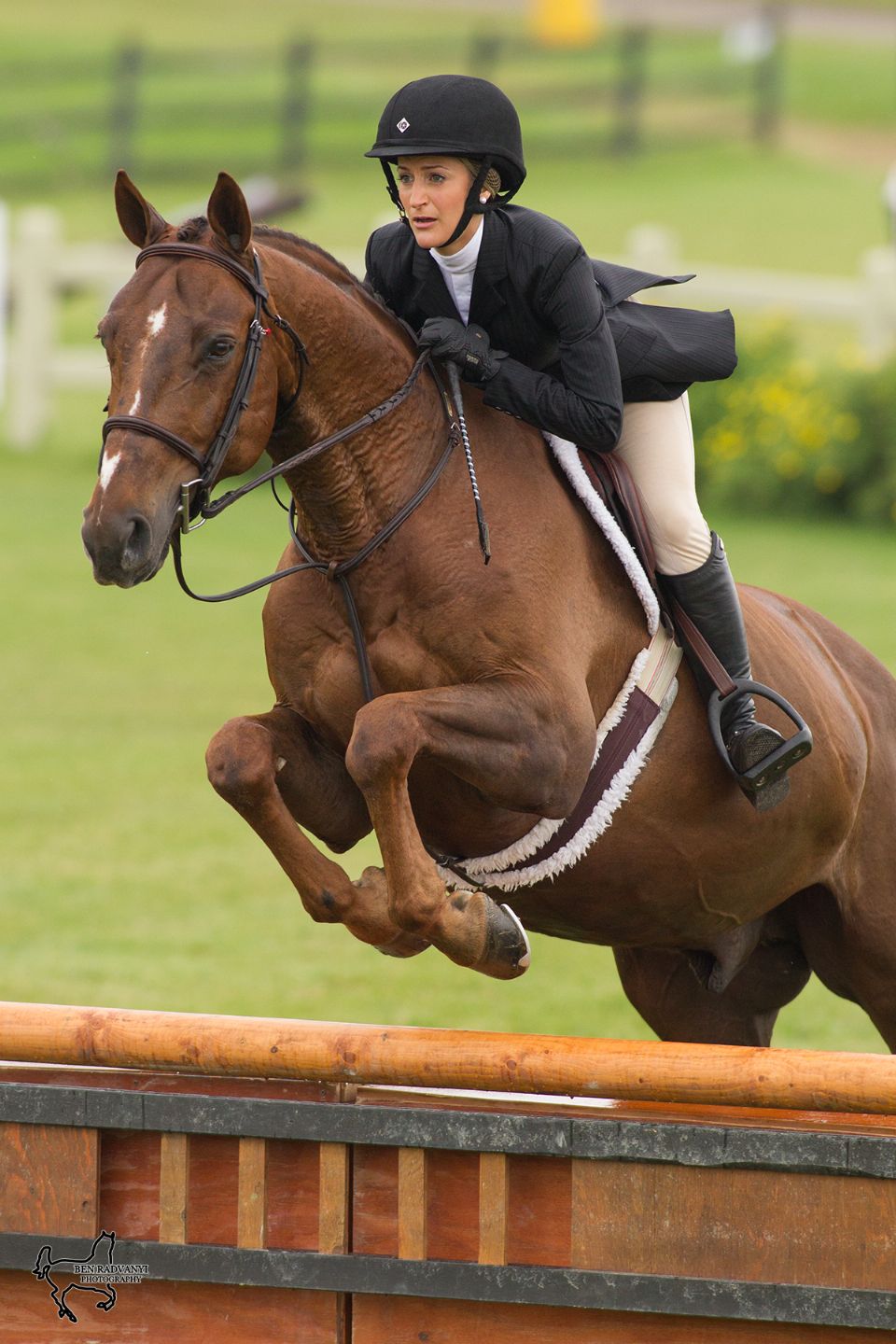 Ainsley Vince of Burlington, ON, and Magic Show led the victory gallop following the $10,000 Canadian Hunter Derby, presented by Faces Magazine, on Sunday, June 21. The event highlighted the final day of competition at the inaugural Ottawa International Horse Show, which ran June 17 through 21 at Wesley Clover Parks in Ottawa, ON.

Owned by Muffie Guthrie and Jeff Brandmaier’s Knightwood Stables of Guelph, ON, Magic Show was imported from Europe several years ago as a hunter derby prospect and has since proved himself on many occasions. At the Ottawa International, Vince and Magic Show earned an impressive score of 109 points from the judges, including a perfect 10 out of 10 for beautifully executing all of the high options.

“Muffie and Jeff have done great things with this horse and I was lucky enough to get to borrow him this week,” said Vince. “He was super. He walked right out there and was all business. He has a great jump, is very scopey, and looks beautiful over fences.”

Fittingly, Guthrie and Brandmaier are also the driving force behind the Canadian Hunter Derby Series, of which the $10,000 Canadian Hunter Derby in Ottawa is a member event. Vince also took eighth position in the final standings with a second entry from Knightwood Stables, Lucky 2 Knight.

A total of 30 entries contested the $10,000 Hunter Derby, featuring a challenging course on the expansive grass grand prix field designed by Tommy Feigel and decorated by Evie Frisque, both hailing from Canada.

Vince was impressed with Feigel's use of the grob and bank options, as well as the improvements to the field at Wesley Clover Parks, saying, “I have been showing here since I was a kid, and it was beautiful out there today. We were lucky to be able to do this class here, and it's great for us in Canada to have another facility that we can go to, especially one of this caliber. It's really exciting to see what they have done so far and even more exciting to see what they're planning for the future.”

Six points shy of the winning score, Taylor Brooks of Vars, ON, and It's Coolman were awarded a score of 103 for second place. Third was presented to Taylor Mulligan of Merrickville, ON, riding Dorado of the Lowlands on an even 100 while Laurie Bucci of Carignan, QC, took fourth place with a score of 97 riding Quatro Z Fortuna. Lauren Ferguson of Almonte, ON, and California Gold rounded out the top five with a score of 93.

“I'm not used to having such a huge field to ride on, but it felt good, and my horse loved it,” said Benoit, who trains with Ann Hodgson at Hodgson Stables, Ltd. in St-Lazare, QC. “He was really taking me to the jumps.”

Of Marciano, a nine-year-old chestnut she started herself as a five-year-old, Benoit said, “He's a really sweet horse, and today he was very attentive to my aids – if I was asking him to move up or slow down, he was right there with me. I focused on the basics and that's what got us through.”

Finishing four points behind Benoit in second place was Kathleen Anderson of Etobicoke, ON, and her own Paragon. The pair received scores of 79 and 81 for a total 160. Rounding out the top three was Cawthra Burns of Toronto, ON, who improved her first round score of 71 to an 81 the second time out for a total of 152 riding Munnings for owner Paddy Ann Burns.

“I’m thrilled with our inaugural event!” said Karen Sparks, Executive Director of the Wesley Clover Parks and also a competitor at the Ottawa International. “We were lucky to enjoy beautiful weather throughout the week, and witnessed fantastic riding which resulted in great competition. The riders are so pleased to be back in Ottawa. This is only the beginning of grand horse shows in our great city!”