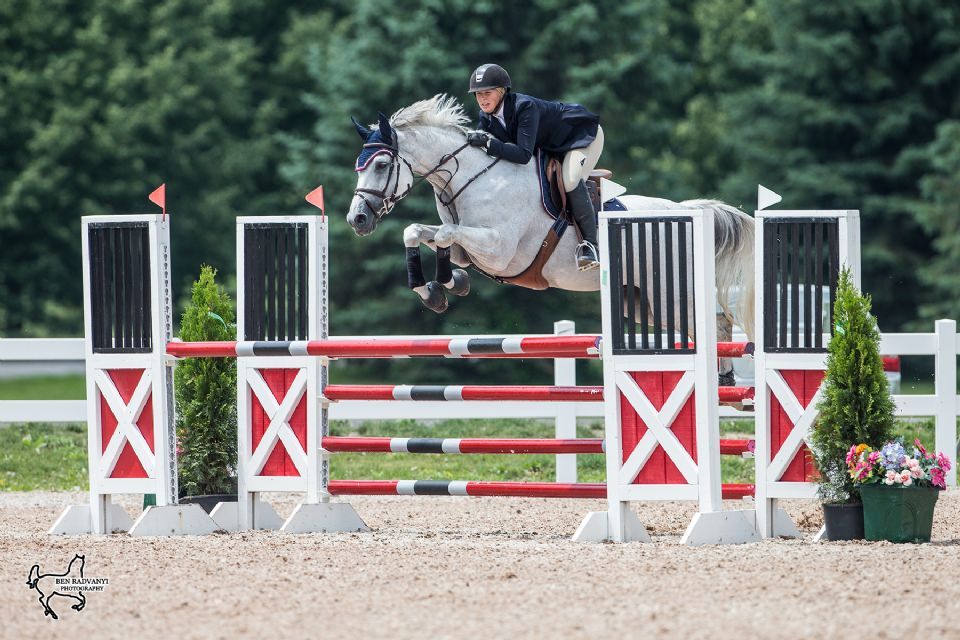 Two weeks of world-class show jumping competition is officially underway with the Ottawa National Horse Show hosting its opening day on Wednesday, July 13, at Wesley Clover Parks in Ottawa, ON.

The Wesley Clover Foundation took over the management of Wesley Clover Parks, formerly known as the Nepean National Equestrian Center, in 2013.  In 2015, they orchestrated the return of show jumping competition to the nation’s capital for the first time since 2011 with the inaugural, one-week Ottawa International Horse Show.

“This is my community,” said Sparks, who is also the founder of her family’s Wesley Clover Foundation.  “I grew up here.  I feel very strongly about Ottawa being a great place to live, to raise your family, and to compete.

“I did compete here in the past, and I knew how beautiful the field is,” continued Sparks, speaking of the facility’s vast grass grand prix jumping field, the only one of its kind in Eastern Canada.  “It was such a shame to have a beautiful field like this, engineered to a world-class level, just sitting vacant, so we choose this as our flagship project for the Foundation.  Everything done here is not-for-profit, and every dollar made on the facility is invested back into it.  Living here, I knew what the economic impact over all those years was to this community.  To lose it, even though we have this world-class facility, was heart-breaking.  It meant a lot to me to bring the horse show back, and having the demand to do so was great.”

Sparks further explained, “We’ve moved to a two-week format based on demand from last year, and we’ve grown by 60 percent in horses and competitors.  We were oversold; we had to put in 104 extra stalls to accommodate demand, and we still have a waiting list.  Having that overwhelming support from the equestrian community has been fantastic.  Then from a local Ottawa perspective, having the economic impact back in the community and having this field used to its potential is really meaningful.”

Sparks’ father, Terry Matthews, founder of the Wesley Clover Corporation, also recognized the incredible opportunity to invest in and improve the ideally located park property as a well-maintained green space for the benefit of the community and the enjoyment of people of all ages.

“A location right on the 416 and the 417?  This is the best junction in the city!” emphasized Matthews.  “It all starts with a good location to become high-profile; we make investments here in this location.  The Wesley Clover Parks is coming on strong with people who know what they’re doing, work hard, and are having fun at the same time.  Frankly, I’m delighted to be part of the team.”

Joining that team is Ian Millar, a ten-time Canadian Olympian and an advisor to the Wesley Clover Parks organizing committee since its formation.

“I was part of the beginning of the park many years ago as a riding school, I was part of the show that eventually ran out of steam, and now I’m part of helping here,” said Millar of Perth, ON, who is also competing at the event.  “It’s a great honour to do that because it’s all about giving back.  If there were to be theme for Wesley Clover Parks, that’s probably the theme – giving back.”

Millar continued, “There are 725 stalls up here.  With every horse comes about four people, and they’re all right here in this community, doing their thing and running the plastic.  The economic impact is huge at $11 million.  It’s great to have show jumping of this level in our community.  It makes me so proud to live just up the road in Perth.”

The grass grand prix acted as the backdrop for the opening day press conference, and it wasn’t long before Millar made his mark on the competition as well.  The 69-year-old captured victory in the 1.35m Open Jumper competition aboard Baranus, owned by The Baranus Group.  Making it a family affair, his daughter-in-law, Kelly Soleau-Millar, topped the 1.25m Open Jumper riding Itty Bitty, a horse that was bred and raised at Millar Brooke Farm in Perth, ON.

Competition highlights throughout the remainder of the Ottawa National Horse Show include Thursday’s $20,000 Open Welcome beginning at 3 p.m., the $7,500 Lynn Millar Memorial Speed Derby at 3 p.m. on Friday, and the $50,000 Brookstreet Hotel Grand Prix on Saturday at 2:30 p.m.  Competition concludes on Sunday afternoon with the $10,000 Canadian Hunter Derby, sponsored by Topline Trailers.