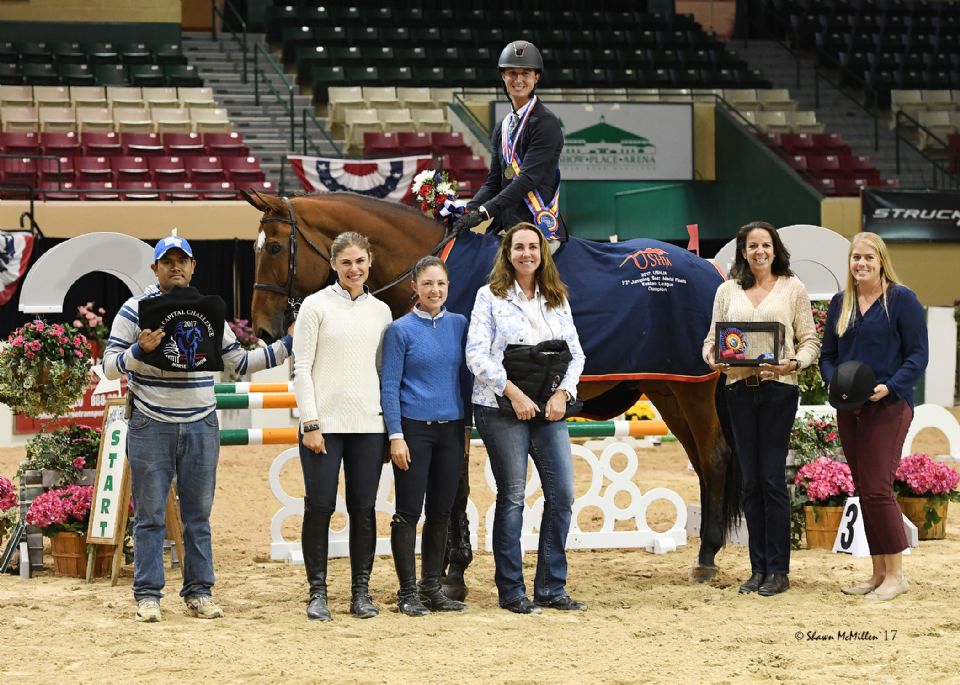 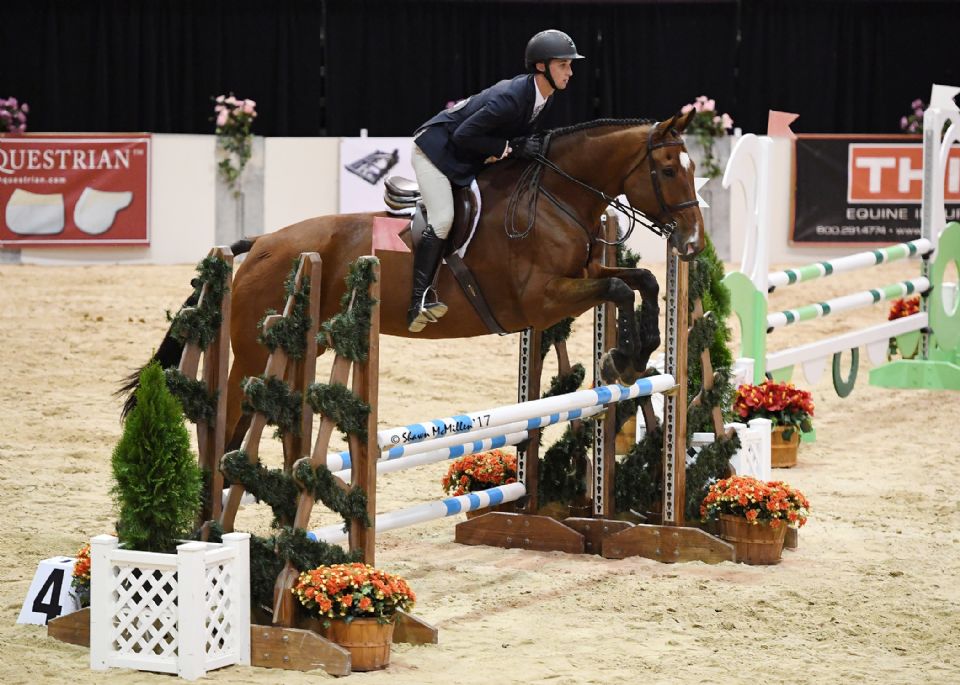 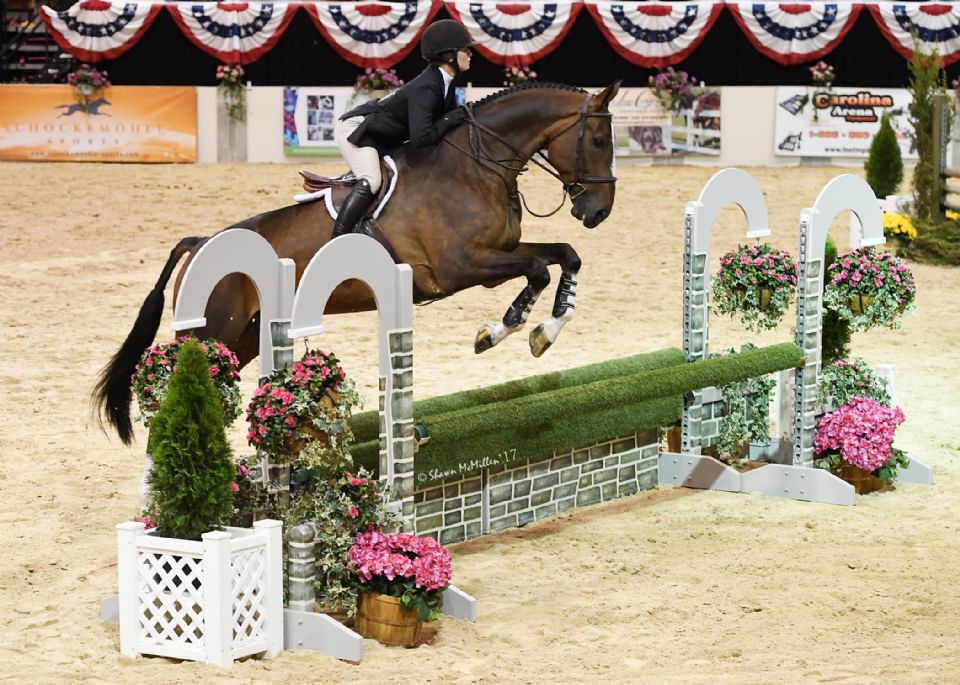 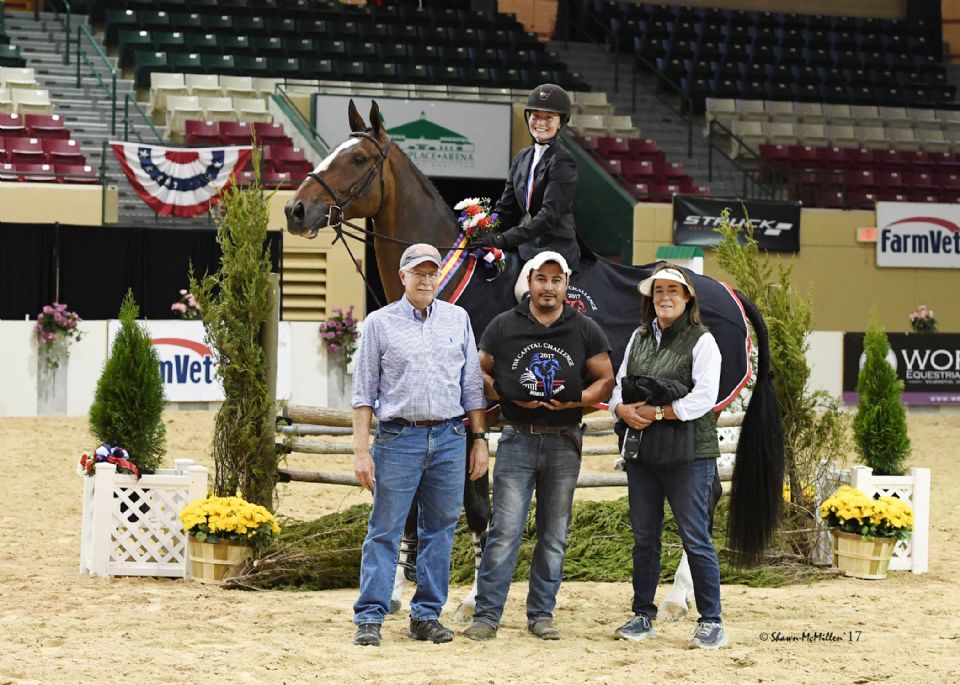 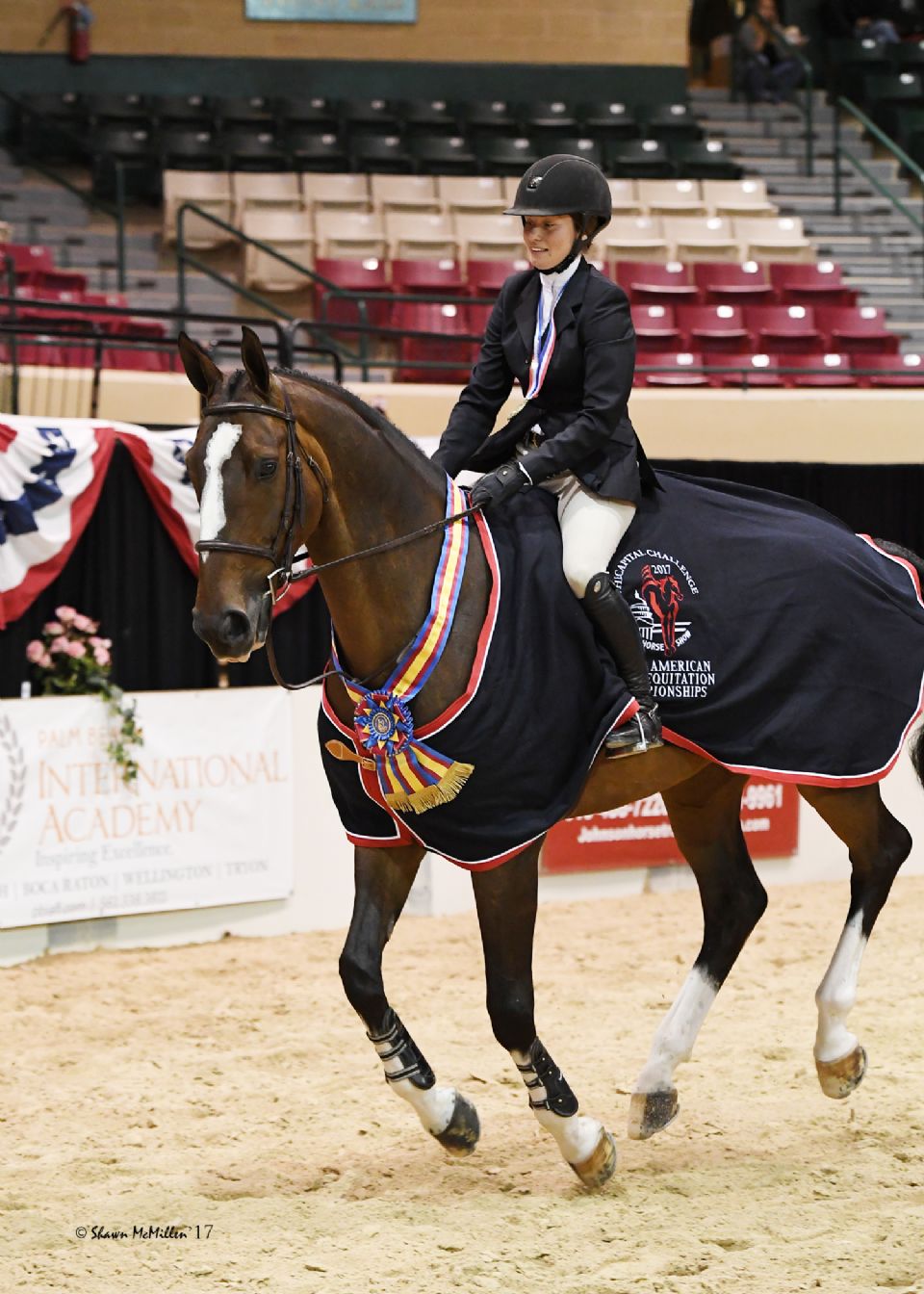 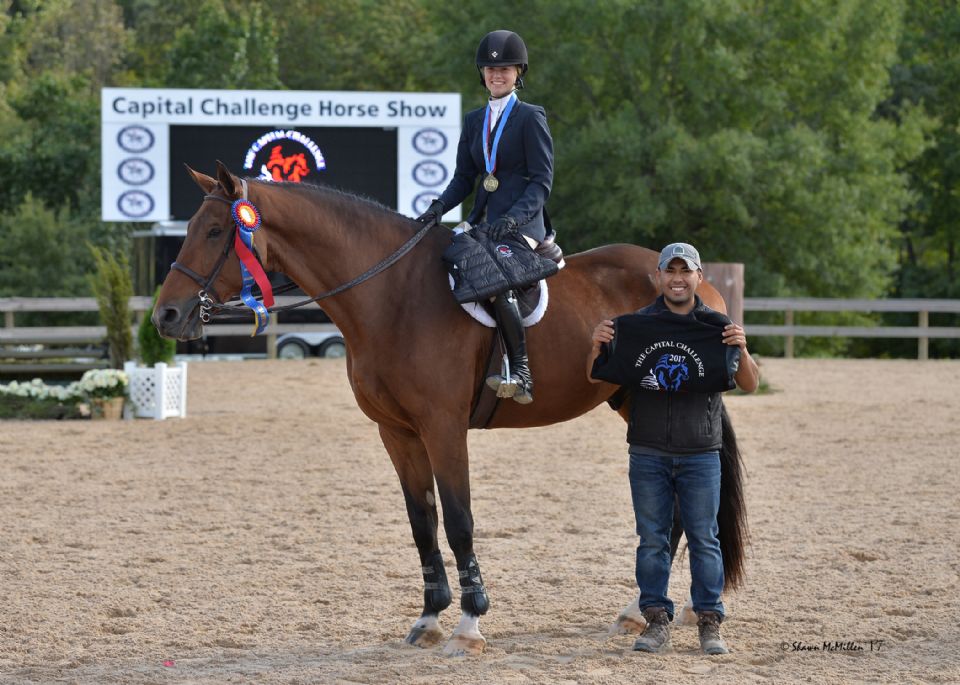 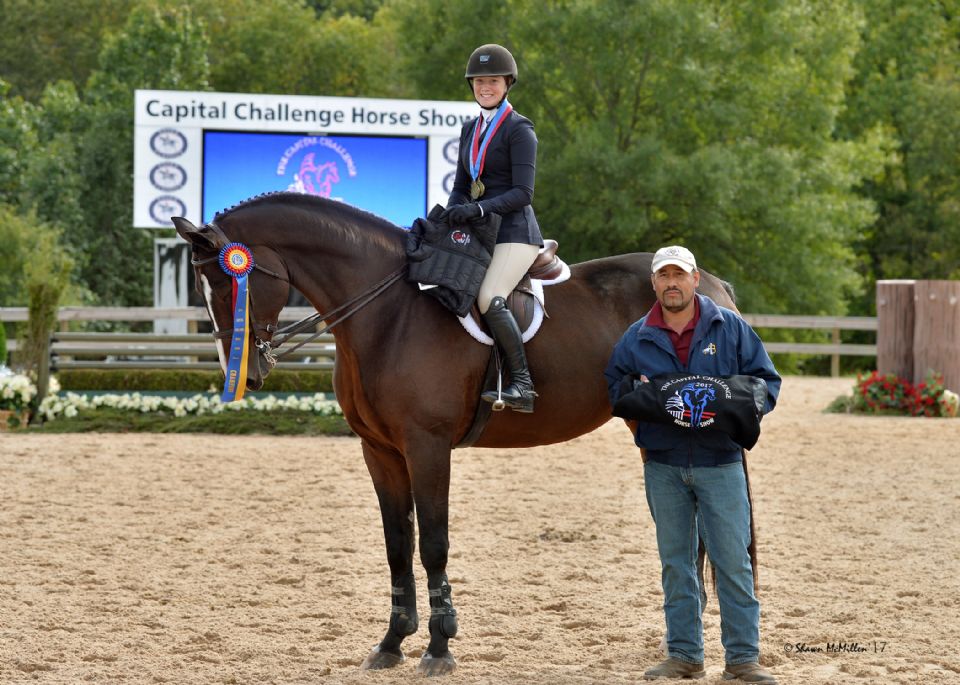 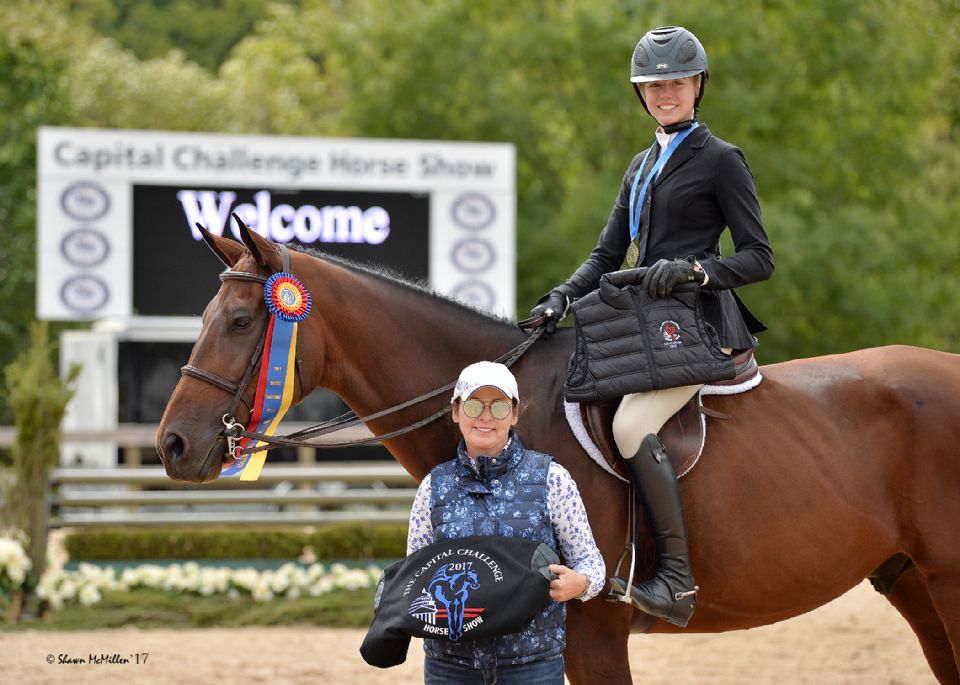 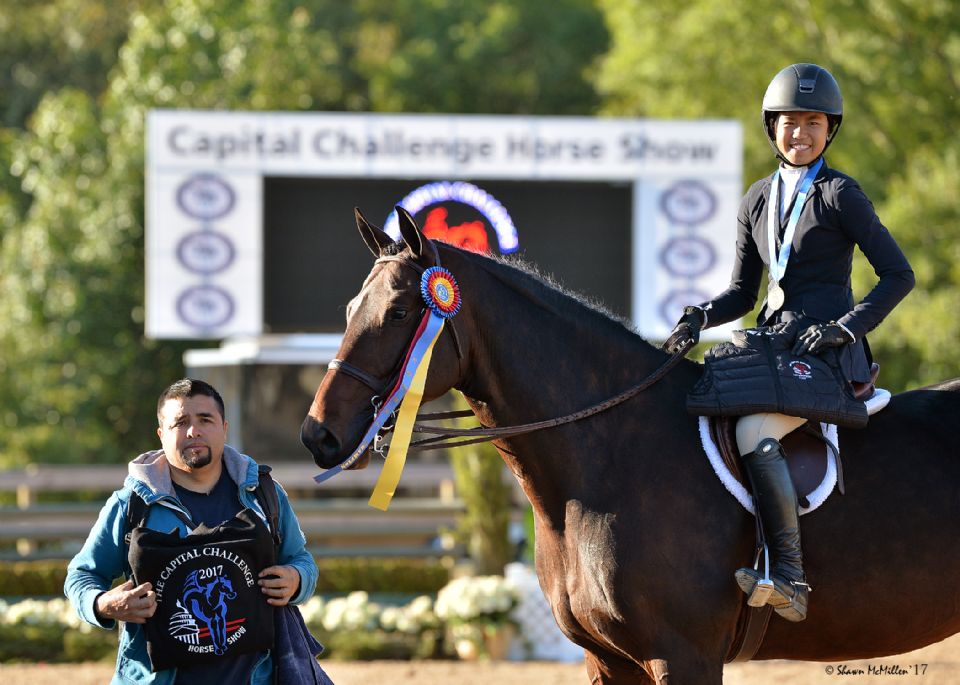 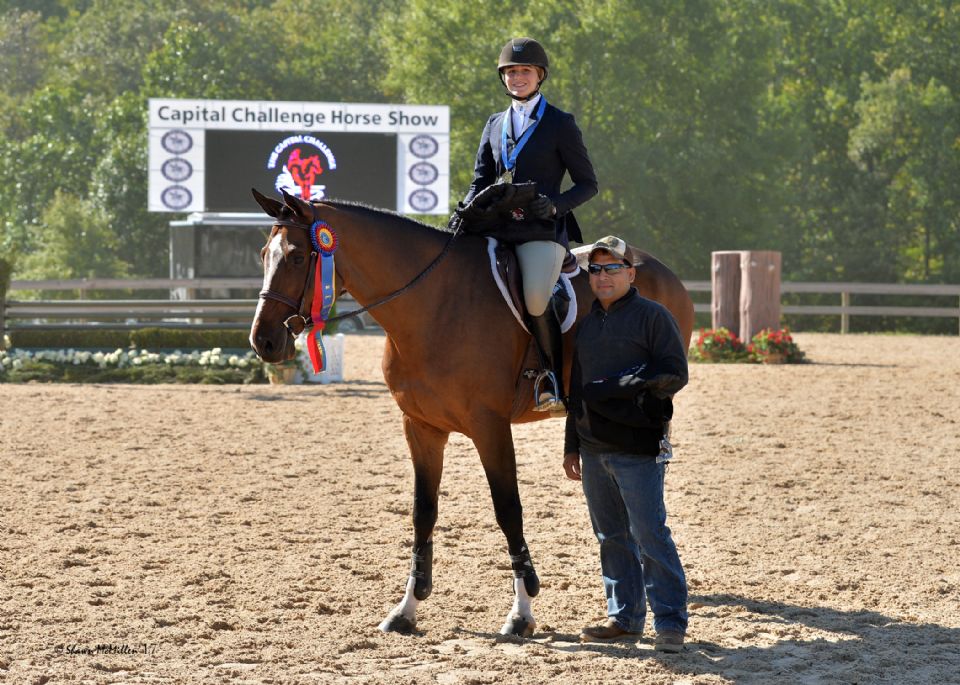 Judges Linda Andrisani and Chance Arakelian presided over the class, which attracted 39 entries over two days of competition. Following the Flat, Gymnastics, and Jumping phases, Helmer and Rachael Davis were fewer than five points apart. Therefore, they were required to work off over a second, shortened course with a tight time allowed, designed by Kenny Krome.

Davis went first and accrued five time faults, scoring a 79, and providing Helmer with the opportunity to consider his strategy. In the end, Helmer’s tighter turns and quick pace scored an 80 and clinched the title without time faults.

“The work-off was really fun,” Helmer said. “It tested your ability to ride at a quick pace but still required you to think and execute really well. I thought my work-off was decent. I wasn’t overly pleased, but I went for it and tried to make it work as best I could. I did realize the time allowed was tight, and I saw Rachael go in and go a few seconds over the time, so I really wanted to make an impression that being under the time was really important.”

Helmer, 16, credited his horse Canterbury and trainer Stacia Madden and the team at Beacon Hill for helping him to achieve success this year. He finished with a score of 477 points, with Davis as reserve champion with 474.5.

“As an inaugural class, I think it’s absolutely awesome that I’m the first to win,” said Helmer, a high school junior who attends Stanford University’s online high school. “It’s something special to keep, and of course, it’s my first major championship win, so that will always be close to my heart.”

Alexandra Worthington, who placed third overall, won the Jumping Phase with a base score of 92. Contelido, ridden to sixth place overall by Sophie Gochman, received the Best Equitation Horse Award.

The 21-year-old rider was awarded scores of 86.33 in both rounds of jumping to finish on a cumulative score of 172.66. At the conclusion of the two rounds, Caroline Ingalls of Rancho Santa Fe, CA, sat just behind Foster in the standings with a cumulative 173.33 score, after earning scores of 86 and 87.33.

“It was extremely nerve-wracking! I feel like such an old lady, because I cannot tell you how nervous I was before going in there,” joked Foster following her victory.

Foster trains with her mother, Patty Foster, out of Rolling Acres Farm and is no stranger to success at the Capital Challenge Horse Show, having grown up competing at the prestigious event and earning numerous accolades there throughout her junior career. However, this year marked Foster’s first time showing at Capital Challenge Horse Show since 2013, when she began attending Auburn University to study Horticulture and to ride on the school’s National Collegiate Equestrian Association (NCEA) team.

“It’s a lot different going into a final like this,” Foster said. “There are a lot of different pressures, and I haven’t done a test in awhile. It’s nice to get back in there and practice a little bit more. And it’s fun being here at Capital Challenge.

“I love how many people get to watch,” Foster continued. “I love that there’s live streaming because it’s really fun to know that my friends are watching me back in Auburn. I think that’s a really great thing about this horse show. I love all the enthusiasm, all the decorations, and the prizes – I think it makes it fun to show.”

With Foster clinching the win, Ingalls took home the second place honor, while Allyson Blais of Boynton Beach, FL, finished in third with a cumulative score of 168.33.