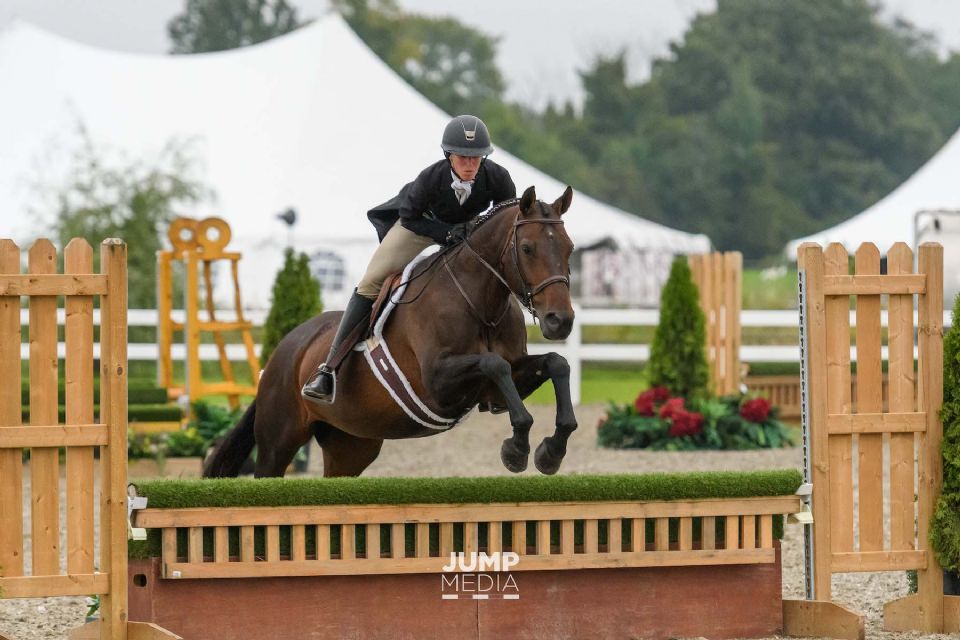 Melissa Marcotte of Contrecoeur, QC, won the $5,000 Hunter Spectacular and Team Challenge, presented by Giant Tiger, on Sunday, September 18, 2022, to close out the Ottawa National show jumping tournament at Wesley Clover Parks in Ottawa, ON
Photo by Jump Media 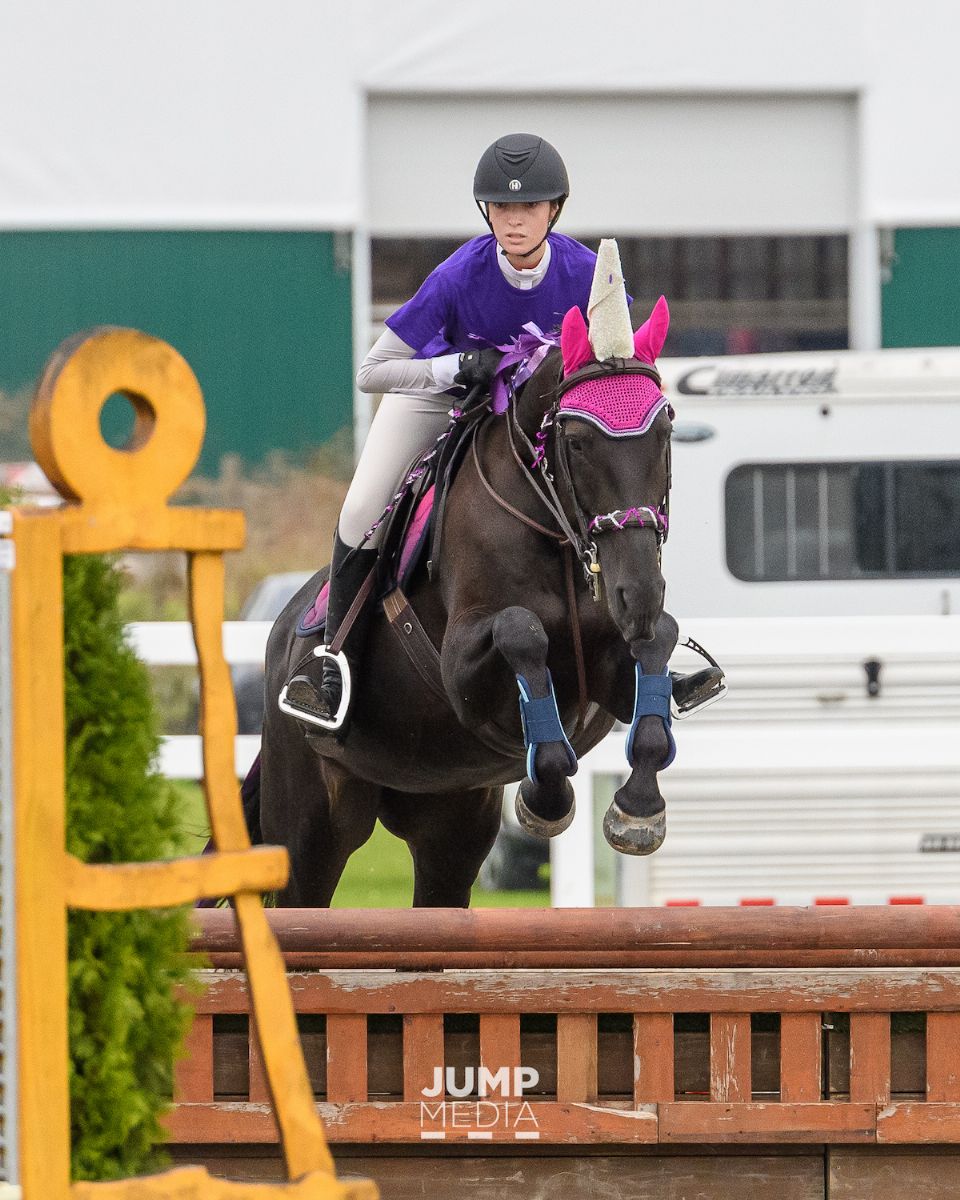 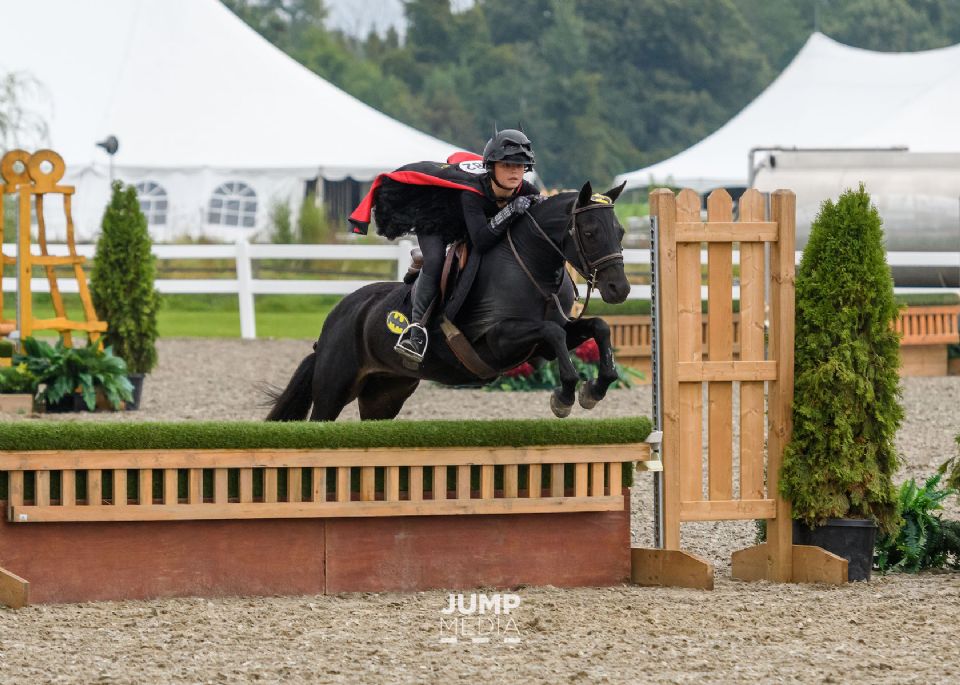 
Melissa Marcotte of Contrecoeur, QC, won the $5,000 Hunter Spectacular and Team Challenge, presented by Giant Tiger, on Sunday, September 18, 2022, to close out the Ottawa National show jumping tournament at Wesley Clover Parks in Ottawa, ON.

With both individual and team titles up for grabs, the Hunter Spectacular attracted a large starting field of 45 entries for a fun-filled competition.  Three heights were offered – 2’6”, 2’9” and 3’ – with teams consisting of one rider competing at each height.

Marcotte topped the individual standings riding Rivercross Ophelia, a 13-year-old bay mare by Rivercross Onyx that was bred in Bromont, Quebec.  The pair executed a beautiful trip in the 2’6” division over the course designed by Pierre Burch to earn a score of 176 from the judges.

“It was super fun, the track was really nice,” said Marcotte who operates Octopus Garden Stables in Calixa-Lavallée, QC, with her husband, Nicolas-Xavier Bélanger.  “The ring is good and Pierre did a great job.  It’s a nice, big ring and I’m sure we’ll have lots of fun in there in the future.”

“I’ve been riding her since November,” said Marcotte of Rivercross Ophelia, who also competes with her owner, Lucie Picard.  “We had some issues at the beginning but now she is perfect.  She’s 13 but she’s really green.  Maybe next year we’ll do some hunter derbies together.”

Junior competitor Sarah King of Lanark, ON, finished runner-up after riding Rosalea, a 16-year-old black mare owned by Elizabeth Steinberg, to a score of 174 in the 2’9” division.  Ottawa’s Mckenna Wu, also a junior competitor, took third place after earning a score of 173.5 riding Dear Prudence in the 2’6” division.  King and Wu were the only two competitors to earn the maximum of eight points for the handiness they showed over the course.

Maude Boulanger Bouchard of Mirabel, QC, followed close behind in fourth on a score of 173 riding Copilote.  Junior rider Caitlyn Tighe of Oxford Mills, ON, and Caught in the Clouds were fifth with 171.5 while yet another Junior competitor, Ellen Hutchings of Perth, ON, and her off-the-track Thoroughbred gelding, Macallan, rounded out the top six with a score of 171.

When the team scores were calculated, Team Ottawa came out on top.  Consisting of Hutchings and Macallan, Hannah Shadbolt riding Intuition, and Brooklyn Winfield aboard Platinum Card, the trio had the highest combined score.

The Prancing Pony Princess Party team, dressed to match their team moniker, took second place overall.  The team was made up of Caitlyn Tighe and Caught in the Clouds, Suzanne Tighe riding Dream of Glory, and Hayley Howell aboard Monterosso.  Third place went to the Queen Bees team made up of Ananya Kalra and Sparks Fly, Jennifer Mulligan and Namesake, and Katie Owens riding Handcrafted.

With prizes on offer for the best team costume, creativity sparkled as much as some of the ponies and horses.  The Wizard of Oz team made up of Michelle Gauthier riding Owami OBF, Kathryn Charky and Beswick, and Sydney Morris riding Charlies Secret Move nailed the theme to earn the ‘Best Costume’ title.

The Ottawa National, held September 15-18, marked the final Gold-rated hunter/jumper tournament of the 2022 season at Wesley Clover Parks and the last opportunity to earn points towards the Ottawa Circuit Awards, presented by Ride Every Stride.  With prizes awarded in 29 divisions, competitors collected points at all Gold and Platinum shows hosted at Wesley Clover Parks this season.  For more information, visit https://www.ottawaequestriantournaments.com/ottawa-circuit-awards.