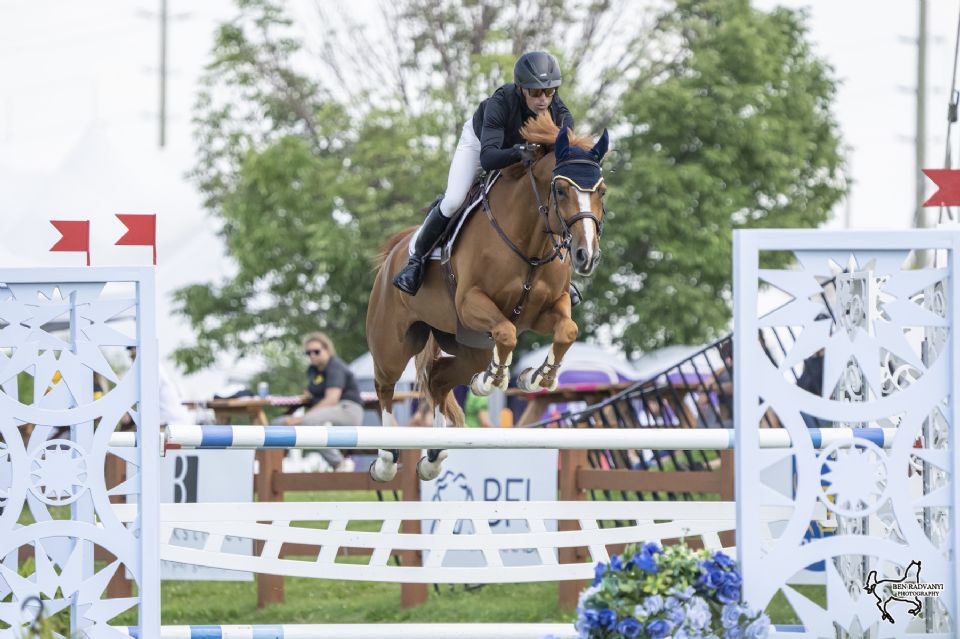 Hyde Moffatt of Brantford, ON, celebrated victory for the second day in a row at Wesley Clover Parks after winning the $10,000 Mark Motors Group Modified Grand Prix on Sunday, July 17, 2022, in Ottawa, ON.
Photo by Ben Radvanyi Photography 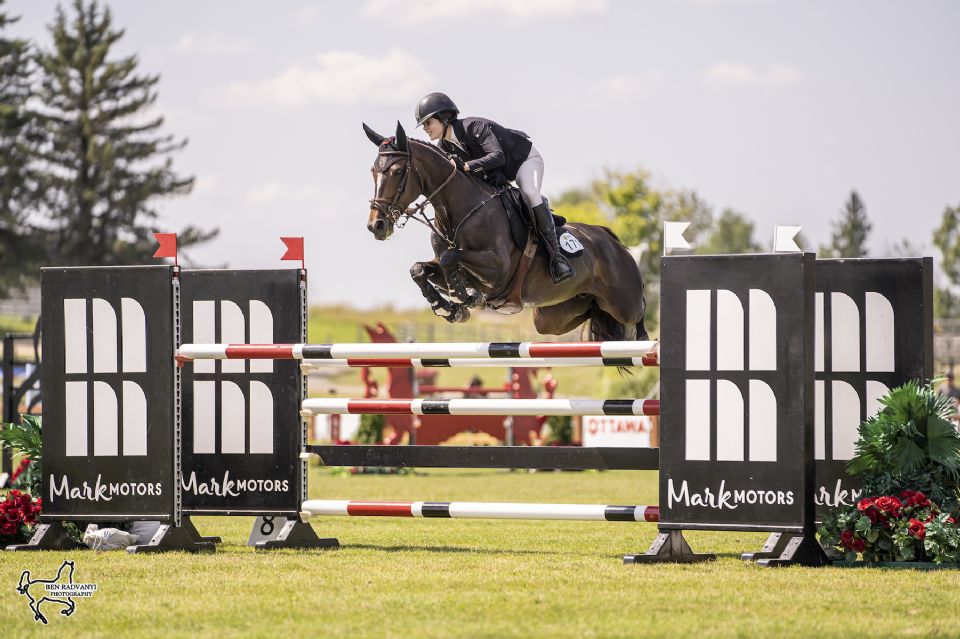 Stephanie Gallucci of Toronto, ON, and Jersey clear the Mark Motors Group signature fence on their way to a second place finish in the $10,000 Modified Grand Prix.
Photo by Ben Radvanyi Photography 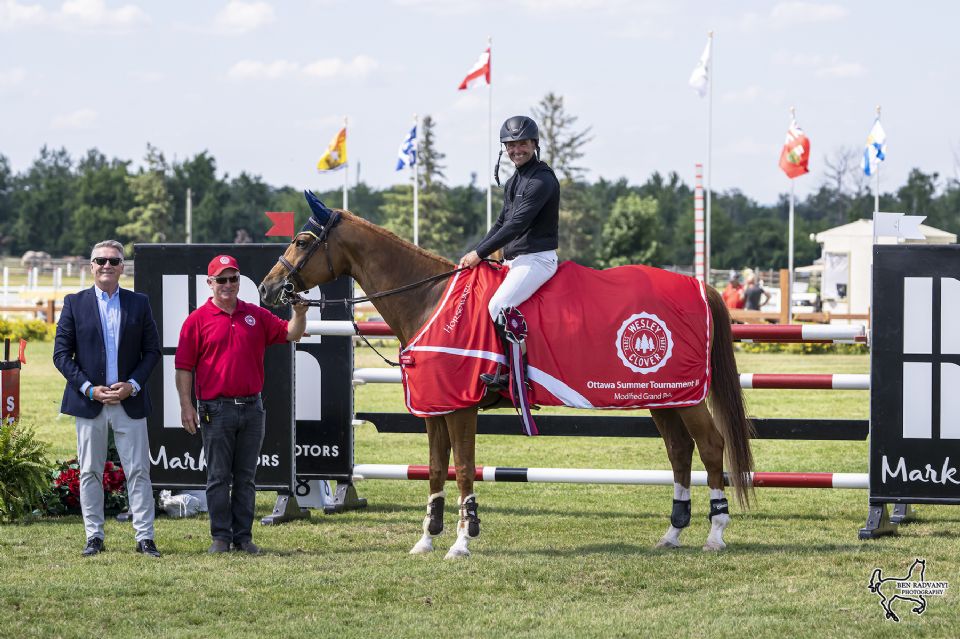 For the second day in a row, Hyde Moffatt of Brantford, ON, was in the winner’s circle after winning the $10,000 Mark Motors Group Modified Grand Prix to close out the two-week Ottawa Summer Tournaments.  On Saturday, Moffatt and Donjo successfully defended their title in the $50,000 RBC Grand Prix at Wesley Clover Parks in Ottawa, ON.

The final day of the Ottawa Summer Tournaments saw 18 challengers come forward to jump the 1.40m Modified Grand Prix track set on Wesley Clover Parks’ expansive grass grand prix field by Brazilian course designer Marina Azevedo.  The first to go, Vanessa Robert of St. Bruno, QC, produced a clear round and would eventually be joined by four other horse-rider combinations in the jump-off.

Coming back first for the tie-breaker, Robert again jumped clear riding Miss Peggy Sue PS, an eight-year-old mare owned by Ecuries La Montee, and set the time to beat at 50.41 seconds.  Moffatt followed next in the order with his first of two mounts and proved that Robert’s jump-off time was beatable by stopping the clock in 41.69 seconds, but a rail down at the second obstacle would leave him fourth in the final standings with Jeffrey Jarden, an eight-year-old Dutch Warmblood gelding (Bustique x Warrant) purchased at the beginning of the year by Ariel Grange.

Beatrice Daviault of St. Damase, QC, was next to challenge riding Levaro Z, her 10-year-old Zangersheide stallion (Levisto Z x Calvaro Z), but two rails down would leave the pair in fifth place overall.  Stephanie Gallucci of Toronto, ON, blazed around the shortened jump-off track in 39.73 seconds, leaving all the rails in place to take over the lead with Jersey, an eight-year-old Dutch Warmblood mare (Brainpower x Ramires) purchased by Equine Partners International LLC in the summer of 2021.

As the final challenger, Moffatt knew what it would take to win.  Having shown Langley sparingly but with great success in the young horse divisions, Moffatt asked the eight-year-old Canadian-bred mare (Lansdowne x Andiamo) for speed and precision and got both, crossing through the timers in 37.83 seconds to claim victory.

“She’s really turned out to be a fantastic horse,” said Moffatt of the mare bred and owned by Grange of Cheltenham, ON.  “She is the true definition of a homebred.  It’s fun to see them grow up from the time they hit the ground.”

Langley’s sire, Lansdowne, was ridden to great success by Ireland’s Conor Swail, including at the 2013 European Show Jumping Championships in Herning, Denmark, while her dam, Pitareusa, was a member of Canada’s fifth-place team at the 2010 World Equestrian Games in Lexington, KY, under Yann Candele.

As for winning for the second day in a row at Wesley Clover Parks, Moffatt noted, “It’s a real privilege each and every time to come here and it’s a privilege to win on this field.  I’ve been coming here since I was a junior watching the best in Canada do their thing, and to have a turn to do those same things is a dream come true.”

In a special presentation held before the $10,000 Modified Grand Prix jump-off, Lauren Esdale of Seagrave, ON, was named the winner of the MarBill Hill Under 25 Jumper Bonus Awards.  Awarding $5,000, $3,500, and $1,500 in bonus money respectively to the top three finishers in Under 25 jumper competition, Esdale, 20, took home the lion’s share by earing the most points with her mount, Viamdios d’Avril, and also took third place in the standings with Hilco.  Rayne Dubois, 21, of Ottawa, ON, squeezed into second place with her mount, Dublin.