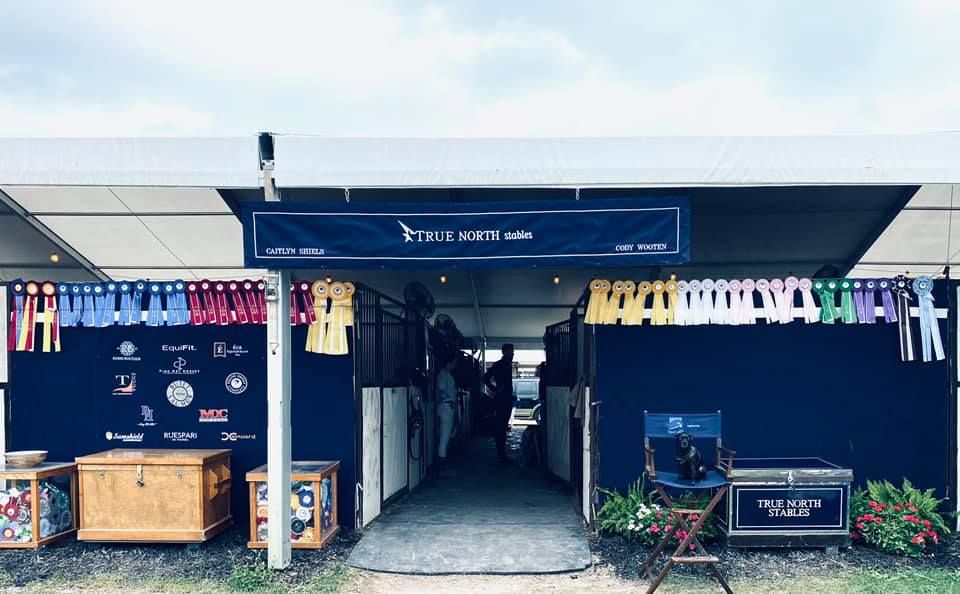 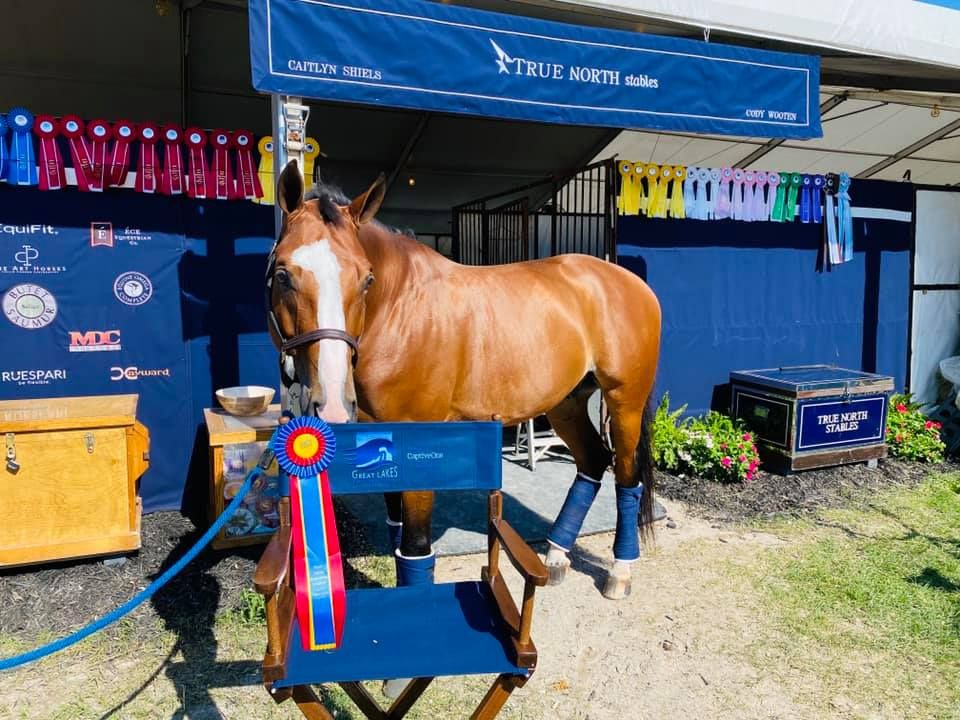 One Dance and his championship ribbon.
Photo courtesy of True North Stables 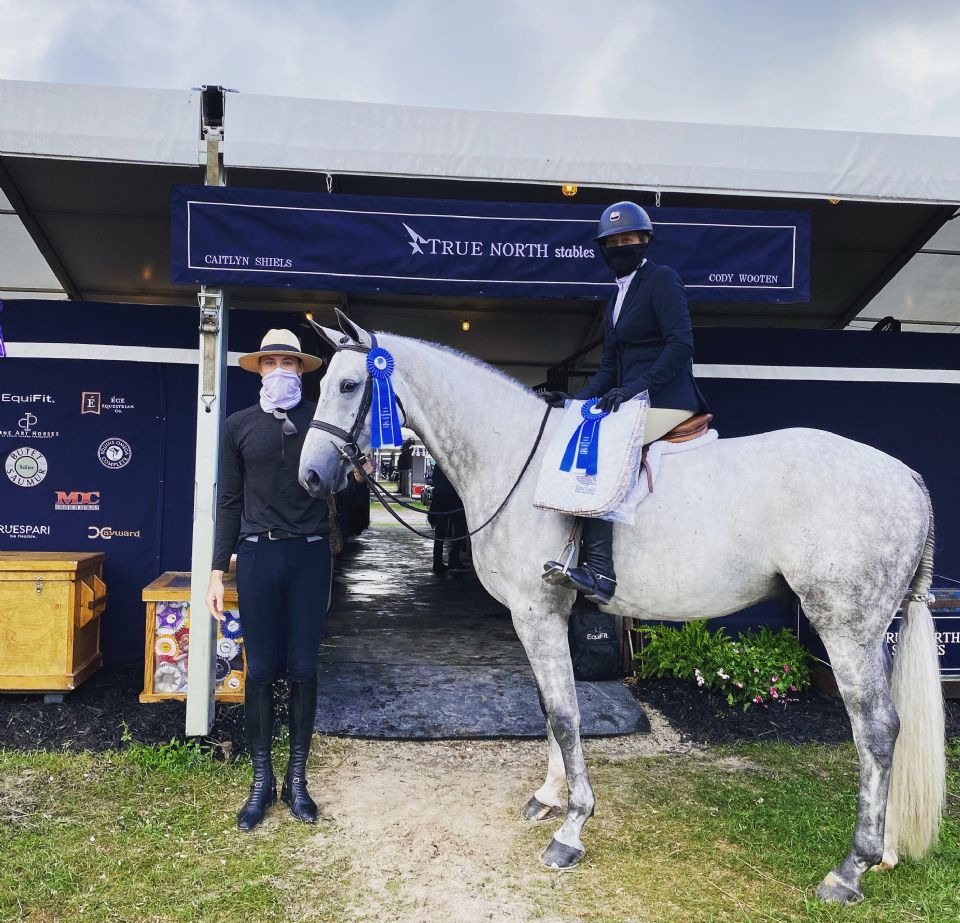 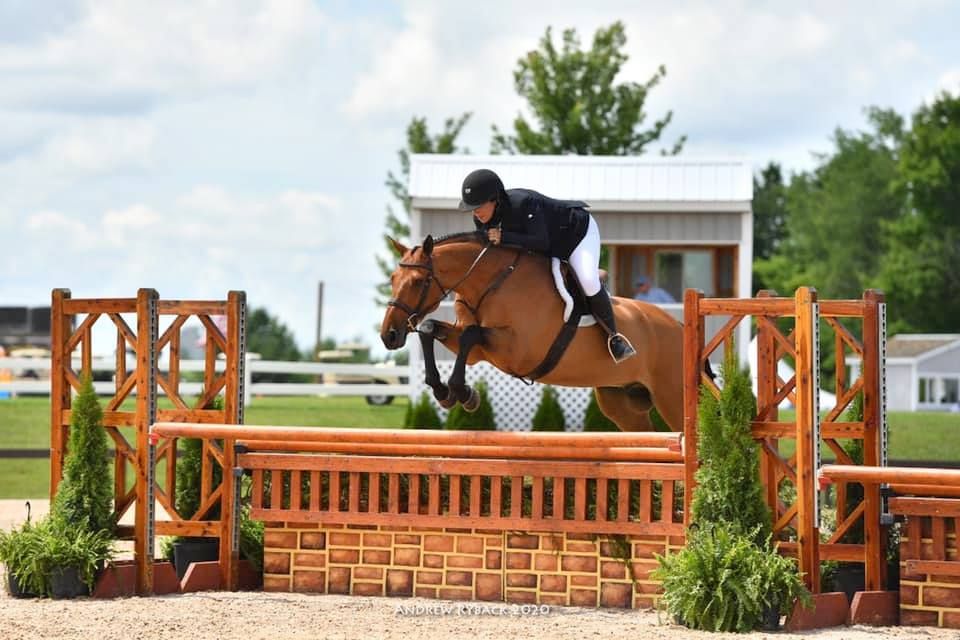 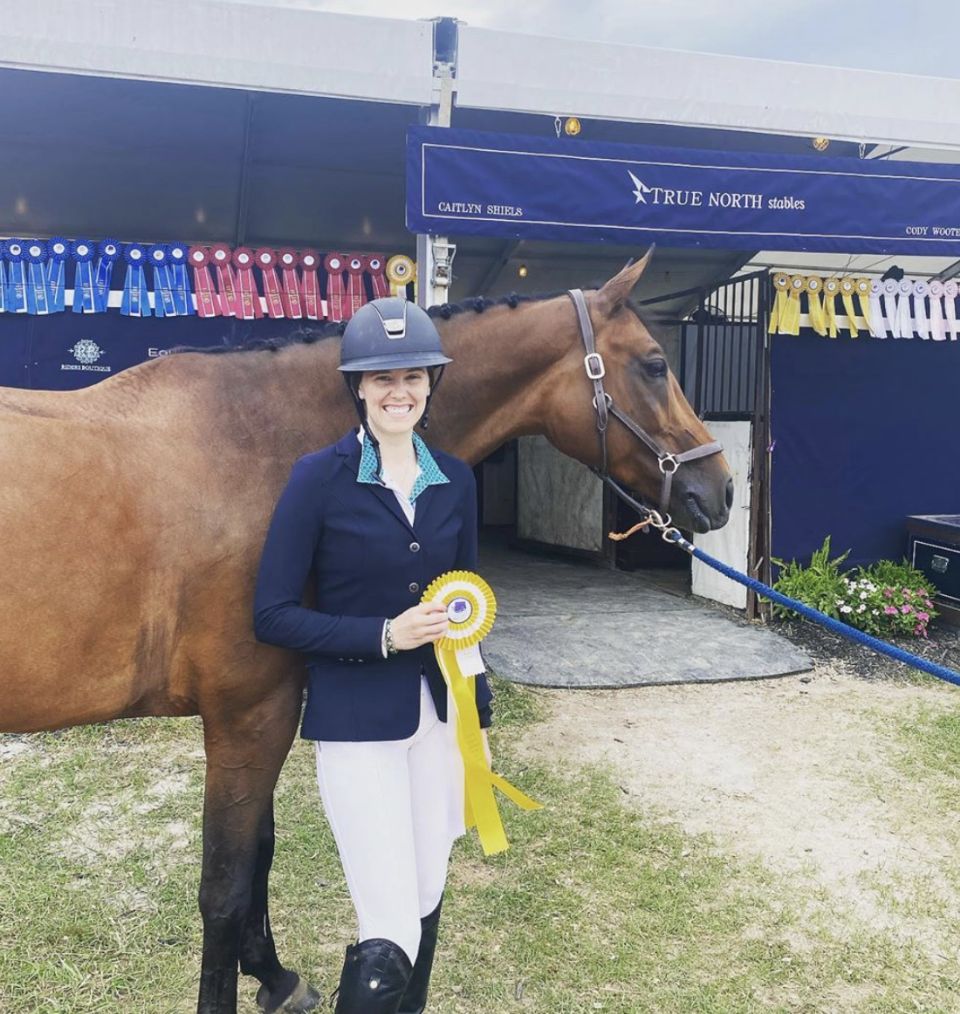 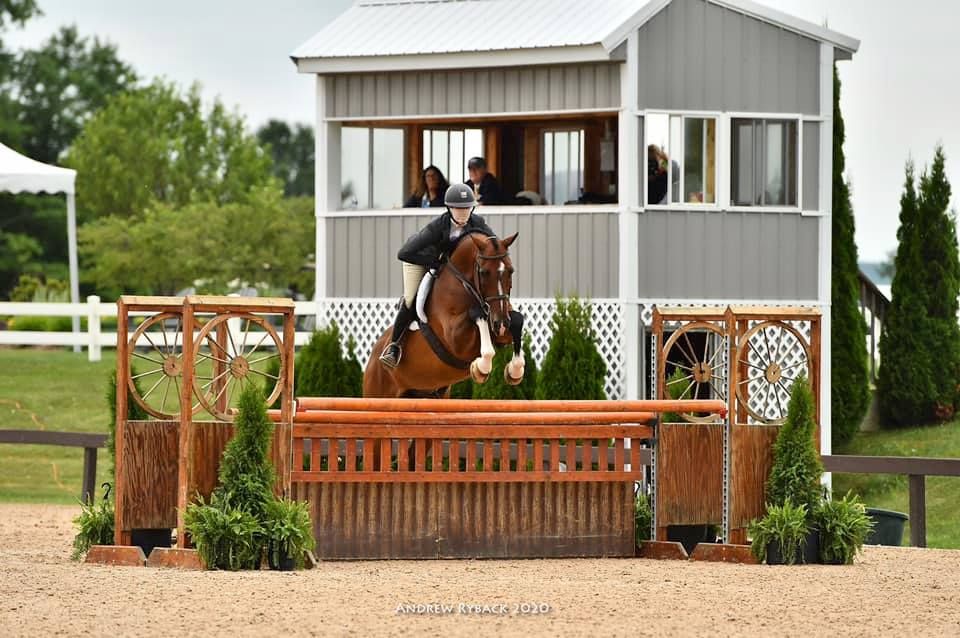 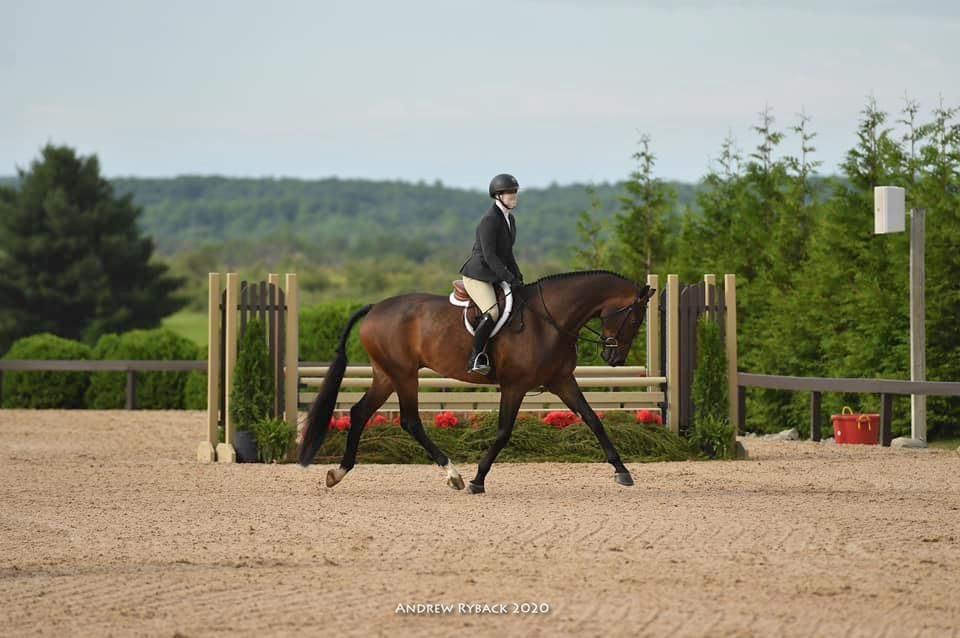 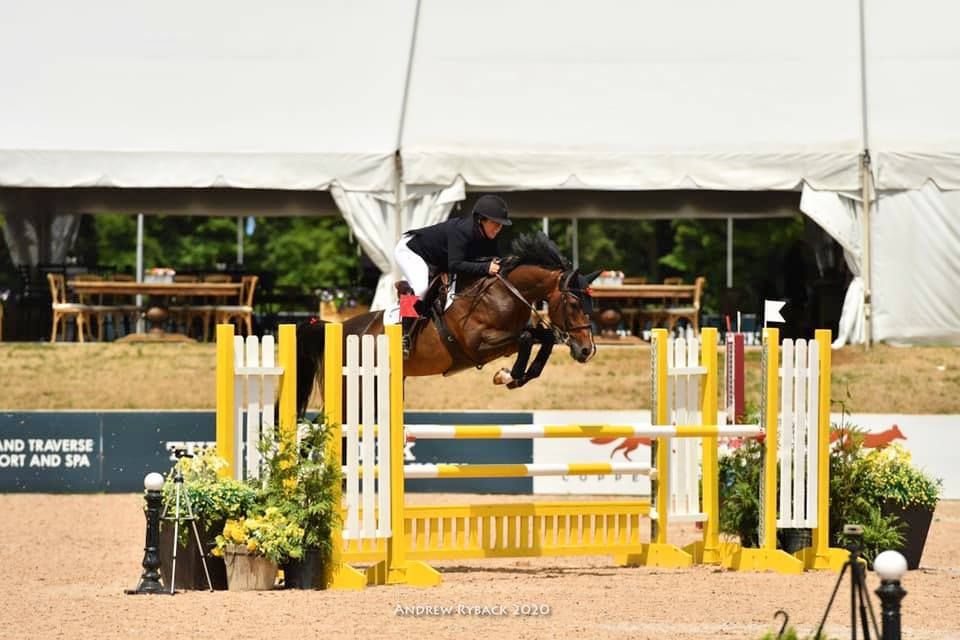 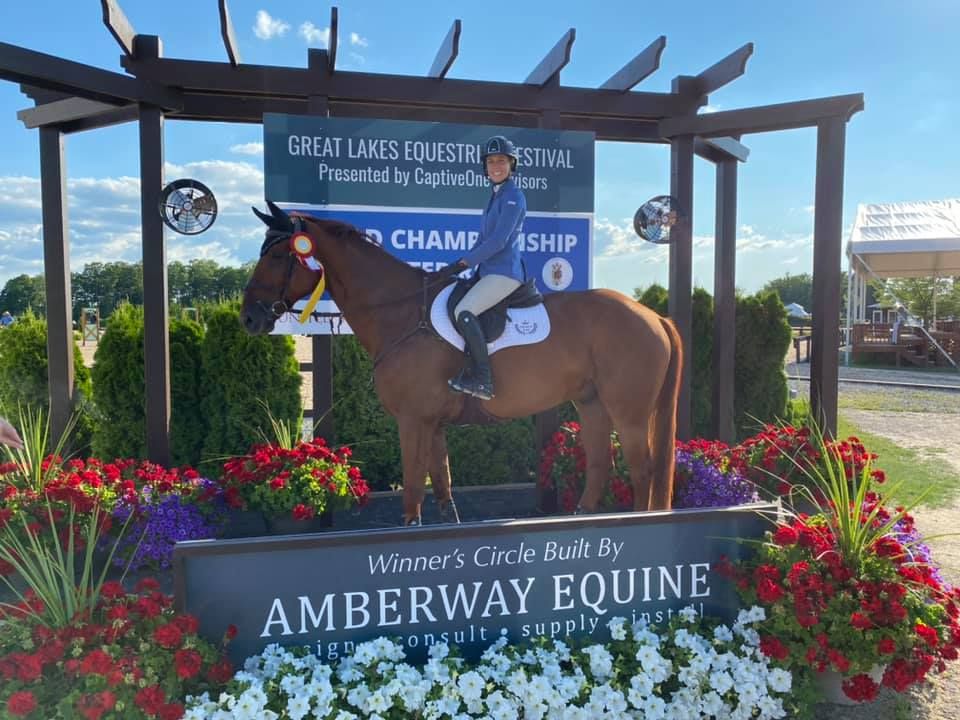 The team from True North Stables, led by head trainer Caitlyn Shiels, had a successful two weeks competing at the Great Lakes Equestrian Festival in Traverse City, MI, on July 15-26. Based outside of Chicago, IL, True North Stables is a full-service hunter/jumper training program.

Earning the Young Hunter 3'3" championship during WCHR week, One Dance, a six-year-old Belgian Warmblood gelding, and Caitlyn won two jumping classes as well as placed second over fences and third under saddle. One Dance also had a top eight finish in the $5,000 USHJA National Hunter Derby during week three.

At just five years old, Carlisle is showing immense talent! He and Caitlyn won the reserve championship in the Baby Green Hunters during week three at GLEF. They placed first, second, and fourth over fences and were second under saddle.

One Dance and Carlisle are offered for sale and can be seen in Kentucky at the Bluegrrass Festival and KHJA Horse Shows in August.

"This was Michelle's first show since March in Florida. She has a lot of trust in our team and in her horses. She was mentally focused. I give her a lot of credit, and I'm very proud of her and her horses. It was a huge reward to what (assistant trainer) Cody Wooten and I have been doing with her horses' programs." - Caitlyn Shiels

With her horse Europa on a break, Jennifer Betts took to the ring on Lola, a horse she is leasing from Oakland Ventures. They placed second, third, and fourth in the Low Adult Jumpers.

"Her riding has come a long way. She was able to get right on a new horse, go in the ring, and be competitive. She's worked very hard for it!" - Caitlyn Shiels

Caitlyn and Cassius, owned by Durpetti Equestrian, picked up two seconds and a third in the High Performance Hunters during week four. Although they had a hiccup at the first jump in the derby, Caitlyn used it as a way to learn.

"We continued with our plan and did all of the high options on course. I utilized the rest of our time in the ring to practice and refocus." - Caitlyn Shiels

Apollo made his Green Hunter 3' debut at GLEF and had competitive ribbons with consistent performances.

"He's becoming a show horse!" said Shiels of his growth.

Michelle Durpetti also took to the jumper ring in her first time back in competition since the Winter Equestrian Festival in March. She and Serafina had a blue ribbon clear in the 1.00m Jumpers.

Also showing under the guidance of Shiels and Wooten was Alexis Bodo of Coronation Farm. She and Donald Duc T&LZ were reserve champions in the 1.20m Jumpers during week four.

Caitlyn Shiels shared with Jumper Nation her tips for incorporating ground rails and poles into a warm-up routine.

“Whether it’s to help the rider think about rhythm or to help the horse, I’ve always utilized rails like an extra friend or an extra tool,” explained Shiels.

"The warm-up ring isn’t the place to introduce something new or complex or to really drill what you’re going to do in the show ring. Instead, I want both the horse and rider to feel confident going into the show ring.”

True North Stables is accepting new sales horses and clients. Contact Caitlyn Shiels if you want to join the True North team and start 2021 with a fresh outlook.

About True North Stables
True North Stables is a full-service hunter/jumper training program, dedicated to horsemanship and to providing top-class riding, training, and sales services to both horse and rider. Led by Caitlyn Shiels and assistant trainer Cody Wooten, with bases in Illinois and Florida, True North Stables offers highly individualized instruction, horse acquisition and sales assistance, and the opportunity to excel in the sport and in nationwide competition. Learn more by visiting www.TrueNorthStables.com.