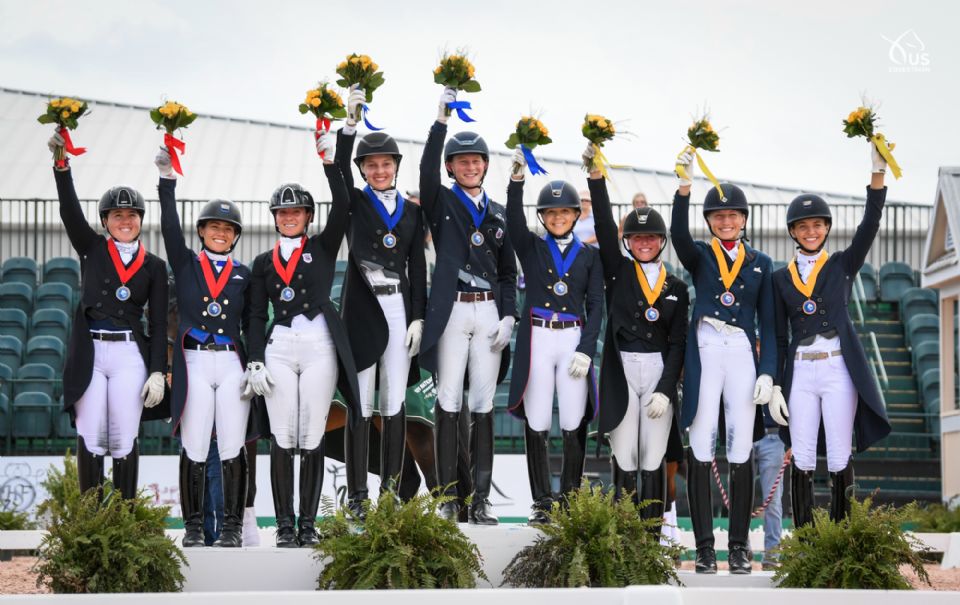 The U.S. Stars and Stripes Team won the FEI Nations Cup CDIO25 on Wednesday.
Photo by Taylor Pence US Equestrian

Personal best FEI Intermediate II 16-25 Test scores from Benjamin Ebeling with Illuster Van de Kampert and Emma Asher with Elegance N helped give the U.S. Stars and Stripes Team the gold medal edge in the FEI Nations Cup CDIO-U25 on Wednesday, March 11. The competition, which debuted in 2017, is part of the Adequan® Global Dressage Festival (AGDF) Week 10 festivities and gives young dressage athletes, aged 25 and under, the opportunity to participate in team competition format. Along with teammate Rosemary Julian-Simoes aboard Rankrado and led by Chef d’Equipe George Williams, the U.S. Stars and Stripes Team earned a total score of 139.559 for the win. The U.S. Star Spangled Team, led by Chef d’Equipe Charlotte Brehdal, consisted of strong rides by Hope Cooper with Hot Chocolate W, Kerrigan Gluch with Vaquero HGF, and Natalie Pai with Utopie Douilly, and earned silver with a score of 137.911. Canada earned bronze with a score of 134.000.

“This team did extremely well, but I was very proud of all the U.S. riders on both teams. I think it really reflects the programs we have and what we have been trying to do, what Charlotte Bredahl and our whole coaching program [has done], and the way we all work together,” said Williams, the U.S. Dressage Youth Coach. “These riders are making tremendous strides in their ability to compete and ride, and they look very good, so it’s wonderful to see. I think it is through programs like this, and the Discover Dressage USEF/USDF Emerging Athlete Program, we are really able to do things and move forward. It is exciting times.”

“He always lights up a little bit in this arena. He’s naturally a hot horse. Coming into the arena, I could tell this was going to be one of those tests where I really had to be precise with my movements and positioning,” said Ebeling, a U.S. Dressage Young Rider European Tour veteran. “I think his passage was really great today. I was really pleased with his piaffe. He kept calm in that and maintained his balance.”

Competing in her first FEI Nations Cup CDIO-U25, Asher of Greenwood Village, CO, and Elegance N rose to the occasion to receive a score of 69.559%. She and the 11-year-old Dutch Warmblood gelding owned by Seeley Equestrian Ventures improved upon their winning score collected during AGDF 1. Julian-Simoes of Barrington, IL, also made her FEI Nations Cup CDIO-U25 debut, and finished with a score of 64.352% aboard Rankrado LLC’s 16-year-old German Sport Horse gelding.

In only their third FEI test together, Pai of Wellington, FL, and Utopie Douilly, Melanie Pai’s 12-year-old Selle Français mare, led the U.S. Star Spangled Team with a score of 70.676%. Pai, a member of the Discover Dressage™ USEF/USDF Emerging Athlete Program, acquired the ride on ‘Topie’ with the help of her trainer Adrienne Lyle last year, following the retirement of her longtime partner, Unlimited, who jump-started her participation in the program.

Cooper of Concord, MA, who made her FEI Nations Cup CDIO-U25 debut, earned a consistent score of 67.235% with Hot Chocolate W, Mary Mansfield’s 15-year-old Hanoverian gelding.Gluch of Wellington, FL, a four-year veteran of the AGDF FEI Nations Cup CDIO-U25, advanced Vaquero HGF to the U25 level this year for the first time since 2016. She and the 13-year-old Andalusian gelding owned by Hampton Green Farms, who are members of the Discover Dressage™ USEF/USDF Emerging Athlete Program and competed on the U.S. Dressage Young Rider European Tour in 2016, earned a score of 65.059%.