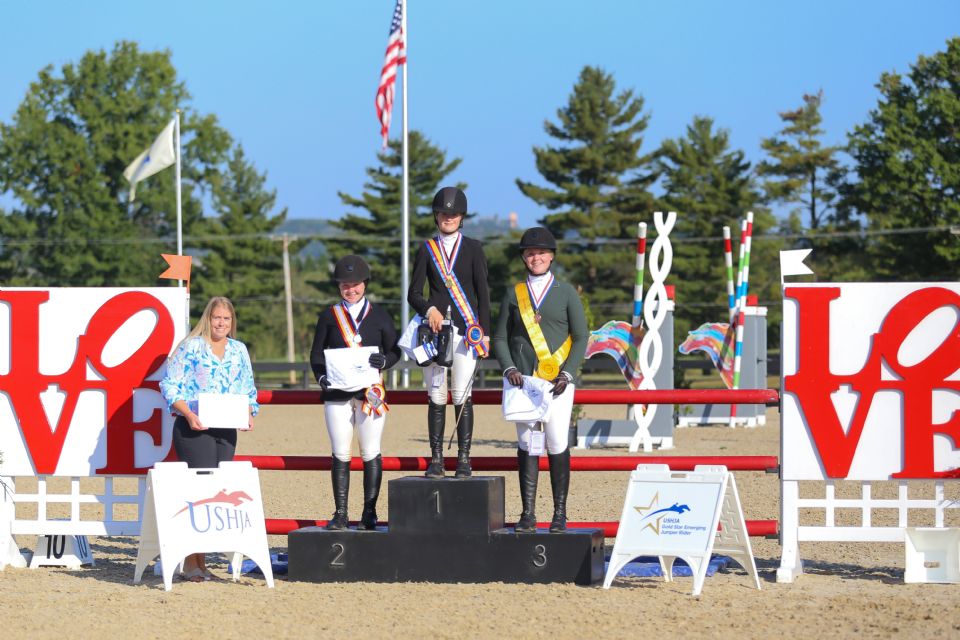 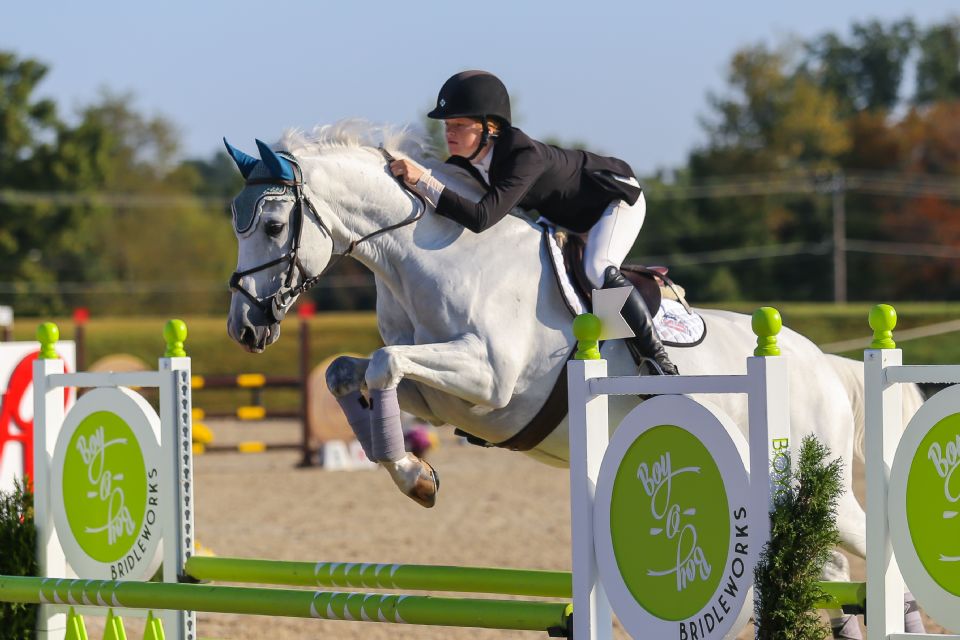 Phoebe Topping earns the gold medal aboard Epic in the Children's section without a single fault over the three-day competition.
Photo by Jump Media 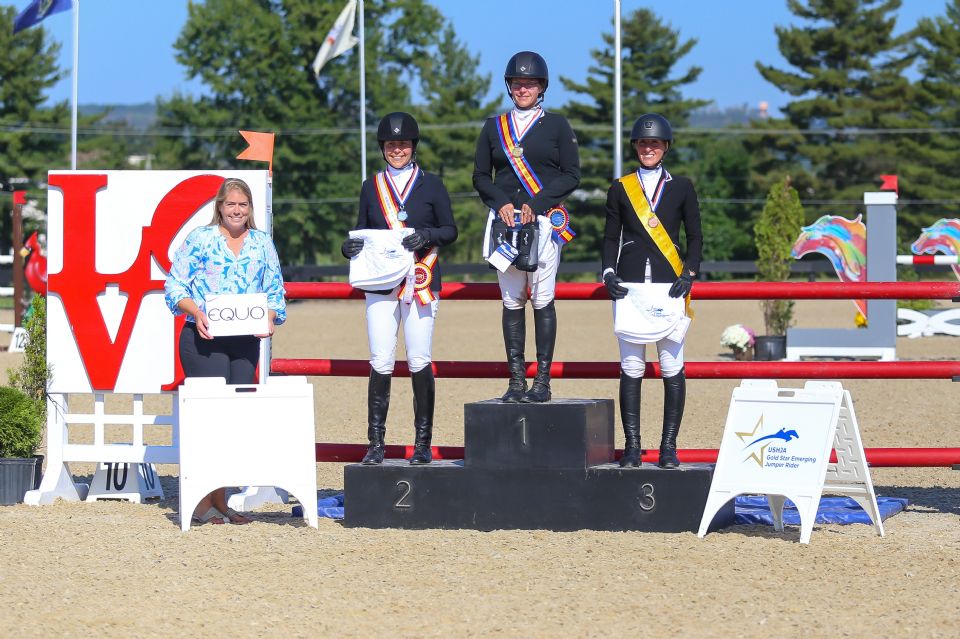 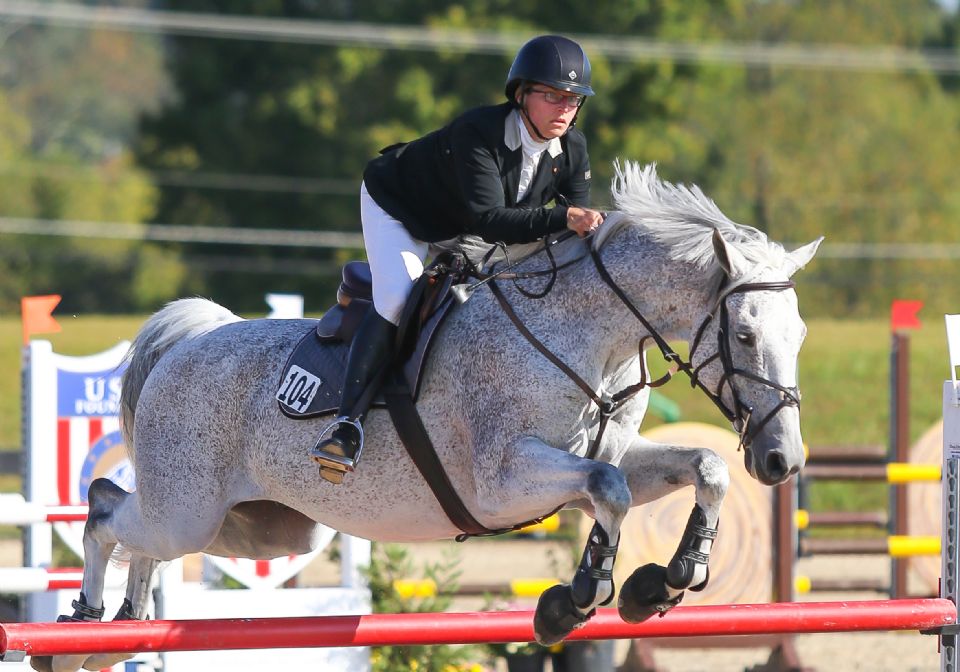 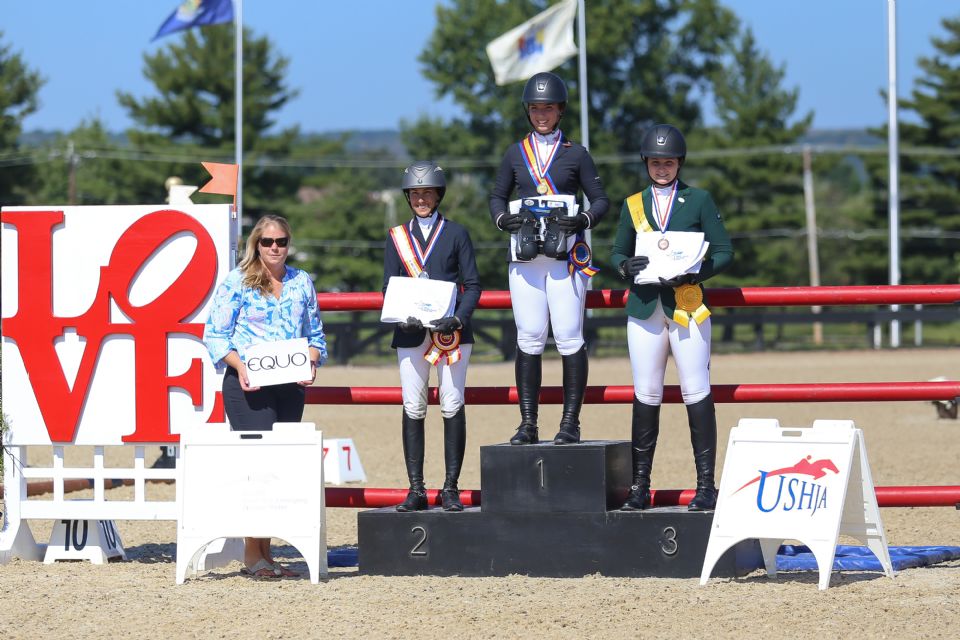 Carley McInerney, Jaime Auletto and Bridget Perier were named 2017 Gold Star Emerging Jumper Riders for earning their spots on the podium in the 1.20/1.25m and 1.30/1.35m Junior/Amateur Individual Championship.
Photo by Jump Media 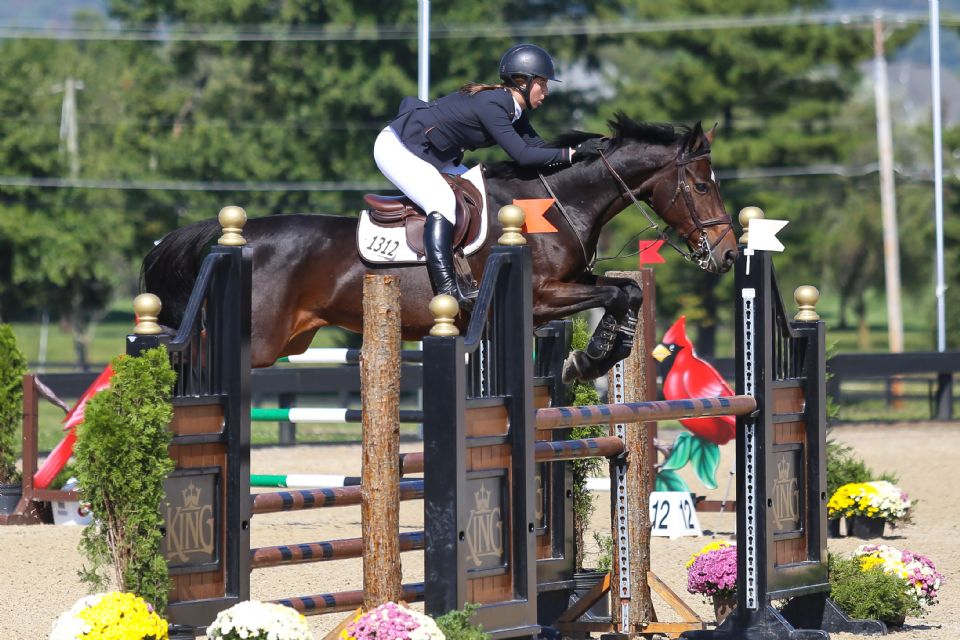 After four rounds over three days, 15-year-old Phoebe Topping of Zone 2 (Sagaponack, N.Y.) finished fault-free to earn the gold medal in the 1.10/1.15m Children's section riding her own 13-year-old Dutch Warmblood gelding, Epic. With just four faults from round three, Sydney Berube of Zone 1 (Bedford, N.H.) took silver riding Lilly. Gigi Moynihan of Zone 2 (Oldwick, N.J) was presented with the bronze medal aboard Golden Dream to round out the podium positions with 5.06 faults.

"I am still a little shocked, really emotional, and very excited," said Topping, who trains with her mother, Amanda Topping. "I am really proud of my horse; he was with me the whole time and always is.

"I have been riding him for two-and-half years and he's a very opinionated ride, which I love about him," continued Topping, who also won a gold medal on Saturday as part of the children's team. "I never thought I would get an opportunity like this. This was my first time riding on a team, and it was a really fun feeling to have teammates and support each other."

Topping was primarily riding hunters until last year when she stepped into the Children's Jumper ring.

"We are still rather new to this ring, but since the Hampton Classic I have seen a tremendous growth in Phoebe as a rider," said Amanda Topping. "James [Benedetto, the Zone 2 Chef d'Equipe] was very helpful, kind and patient. Overall, it is important that these kids have these types of championships, and they are meaningful on a lot of levels for the trainers and the riders."

All three medal winners in the 1.10/1.15m Adult Amateur section finished without jumping faults after four rounds to sweep the podium for Zone 2. Sheila Ann Sadighi (Essex Fells, N.J.) earned the gold medal riding her own 16-year-old Dutch Warmblood gelding, Ulano, while Leslie Schillat (Malvern, Pa.) took silver aboard SLF Destiny with .43 penalties carried over from the faults-converted first round. Kimberly Beattie (Mahwah, N.J.) was presented with the bronze medal after her 1.28-fault performance with Charmander. Sadighi, Schillat, and Beattie were also members of the Adult gold medal team during team competition on Saturday.

"This horse is my soulmate," said Sadighi, who works full-time as a lawyer when she isn't riding. "He has the biggest heart and is such a trier. This is my last show of the season, so I am very thankful that I got to end it on a high note. I love the Adult Amateur division because it is super competitive, but everybody is also really supportive of each other. I am grateful for my team, this facility, and my horse, but I am also privileged to have had some luck out there, which always goes a long way in this sport."

"I am unbelievably excited to go to the Gold Star Clinic," said Sadighi of the opportunity. "I took 20 years off from riding to attend college at Mount Holyoke College and then Law School at Boston College, so I am very thankful for opportunities like this now that I am back in the sport."

Of the weekend's courses built by Olaf Petersen Jr. of Germany, Sadighi noted, "They were technical without being trappy or dangerous. We saw the course reward the horses who were listening, and it showed off adjustability and rideability. Overall, the courses were great."

Petersen has been a popular course designer at Princeton Show Jumping and returned this week for the third time, saying, "I have built the European Championship and Nations' Cups, but this is my first time doing a Championship at this level. I approached it the same way and tried to build up to the specifications and make it as difficult as I could for the riders who were here. I think a championship should never be too easy. These riders handled it very well, and we had fabulous conditions."

New this year is the addition of the 1.20/1.25m and 1.30/1.35m Junior and Amateur sections, which were combined for the Zones 1 & 2 Championship. The individual medals in the Junior/Amateur section saw another sweep for Zone 2 with 16-year-old Carley McInerney (Randolph, N.J.) taking the gold medal aboard her own 12-year-old Holsteiner mare, Cortina 200 with no jumping faults. Jaime Auletto (Tabernacle, N.J) and Ecamorka also jumped to a fault-free finish and were awarded the silver medal with .83 penalties carrying over from round one, while Bridget Perier (Summit, N.J.) took bronze with just four jumping faults riding Welfare.

"I am so happy with my horse," said McInerney. "She was amazing and four rounds is a lot of jumping, but she was jumping incredibly well all weekend. I got her one year ago, and she has been amazing and trying to win ever since. She is so scopey, tries her hardest every time, and has a lot of energy, but is so fun to ride. I could not have asked for a better weekend."

McInerney competed at the 1.20m height, but already has plans to move up, saying, "I am going to try to do more 1.30m classes and then hopefully be able to jump my first grand prix here next year."

McInerney trains at Chester Riding Club in Chester, N.J., under the direction of Jamie Maillet and Sarah Scheiring.

"Carley can ride any horse," said Scheiring. "Whenever we get a new horse into our barn, we put Carley on it first to see what it is like, but she and her mare click especially well."

This year is the first time the USHJA Zones 1 & 2 Jumper Team Championships were hosted by Princeton Show Jumping, managed by Andrew Philbrick. Of the facility, Scheiring noted, "We think one of the biggest reasons that our mare was able to jump four clear rounds is because of the impeccable footing at this facility. It was the perfect place for a championship like this."

USHJA extends special thanks to Andrew Philbrick and the entire Princeton Show Jumping team for hosting the Championships.