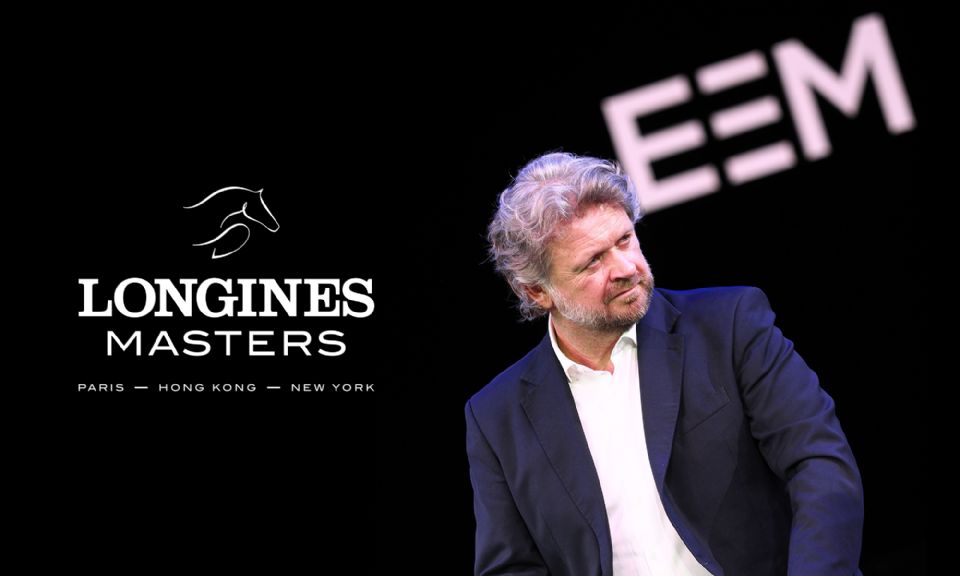 -        From its very first year, the American stage was voted “best indoor showjumping competition in America” by the North American Riders Group.

-        In 2016, the Hong Kong stage won the award for “best experience at a professional sporting event” at the Sports Industry Awards & Conference.

For nearly 15 years now, visionary Christophe Ameeuw and his team at EEM have been guided by a single aspiration: to champion equestrian sports and bring them to the widest possible audiences. More than the best in sports, the Longines Masters Series also offers all audiences—whether with a passing interest or passionate followers—a unique multi-cultural experience that celebrates lifestyle, luxury, fashion, gastronomy, and music on three continents, a story that unfolds across Europe, Asia and America, with tagline #WERIDETHEWORLD.
Season III of the Longines Masters of Paris will open this year with its European stage, in Paris, from November 30th to December 3rd at the Paris Nord Villepinte Exhibition Center – hall 5B – parallel to the Paris Horse Show. The competition will continue in Hong Kong, February 9-11, 2018, and culminate in New York, April 26-29, 2018.

For visuals, the event line-up, posters, accreditations and press kit:

The Longines Masters of Paris will be viewable live and in full on: EEM.tv

A passionate of equestrian sports, Christophe Ameeuw - CEO of EEM and Founder of the Longines Masters Paris-Hong Kong-New York Series - founded the Ecuries d’Ecaussinnes in 1997. Based in Belgium, the stables are internationally reputed for their activities in trading sport horses and high-standard breeding. They are also home to an offering some of the best teaching available in the field. In opening EEM, Christophe Ameeuw and his teams were in pursuit of a challenge: to reinvent show jumping by organizing equestrian events of an entirely new kind. The company built its development by creating the concept of the “Masters”, which together, under the same roof, the best of show-jumping, resplendent displays and art de vivre. After the successes of the Audi Masters in Brussels and the Gucci Masters in Paris, EEM came out with one of the world’s most prestigious equestrian events, the Longines Masters Series, on three continents, in Paris, Hong Kong and New York. Inspired by the Grand Slam in Tennis, EEM created a concurrent “Grand Slam Indoor of Show Jumping”, approved by the FEI, this intercontinental challenge is offered to the world's elite in show jumping, with two prize levels: The Super Grand Slam - a €2,250,000 super bonus for the three consecutive wins in the Longines Grand Prix, in the season order -  The Grand Slam - a €1,000,000 bonus for three successive victories at Longines Grand Prix straddling two Longines Masters seasons.

In 2017, EEM will be creating a new iconic competition, the Riders Masters Cup. Offered to the public alongside the EEF (European Equestrian Federation) and alternating between Europe and the United States, this battle will pit the world's two leading powers in show jumping against one another: Europe and the United States. On the Asian continent, “Asia Horse Week”, rallying point for the international equestrian community there, also serves as a prime setting for the Longines Masters of Hong Kong, illustrating EEM's determination to develop the sport's international arms in the Asia-Pacific Region. Firmly set on putting equestrian sports front and center and making them accessible to all, EEM rolled out a new digital TV channel on November 14, 2017. EEM.tv offers viewers the chance to follow live and free of charge all EEM events worldwide.

ABOUT THE LONGINES MASTERS

Set in the three of the world's most emblematic metropolises - Paris, Hong Kong and New York - the Longines Masters series is recognized as one of the most prestigious events in the equestrian world. Created by EEM and inspired by the Tennis Grand Slam, the series quickly expanded their international reach (Hong Kong in 2013, Los Angeles in 2014). In 2015, the inter-continental trilogy turned into the Longines Masters Series.  Alongside it, EEM created the “Grand Slam of Indoor Show Jumping”, approved by the FEI, the Grand Slam Indoor is the ultimate challenge for the world's elite in show jumping, with two levels of prizes:The Super Grand Slam: a bonus of 2.25 million Euros for winning 3 consecutive Longines Grand Prix in the same season. The Grand Slam: a bonus of 1 million Euros for three successive victories in the Longines Grand Prix from one season to the next. The TV broadcast of the Longines Masters Series reachers, to over 120 countries, almost 320 million households, a coverage increased this year by the launch of EEM.tv, the new digital channel of EEM. It allows everybody to freely livestream the all competition and events during the four days. Save the date : Paris 2017 : November 30th – December 3rd Hong Kong 2018 : February 9th – February 11thNew-York : April 26th – April 29th

Based in Saint-Imier, Switzerland since 1832, the watch-maker Longines can lay claim to know-how honed through tradition, elegance and high-performance. Its long-lasting involvement in sports' timekeeping at world championships and as partner to international federations has helped Longines develop solid, lasting bonds with the world of sport. Renowned for the elegance of its timekeeping devices, Longines is a member of Swatch Group SA, the world's leading maker of time-keeping products. With a winged hourglass as its emblem, the brand is established in over 150 countries.