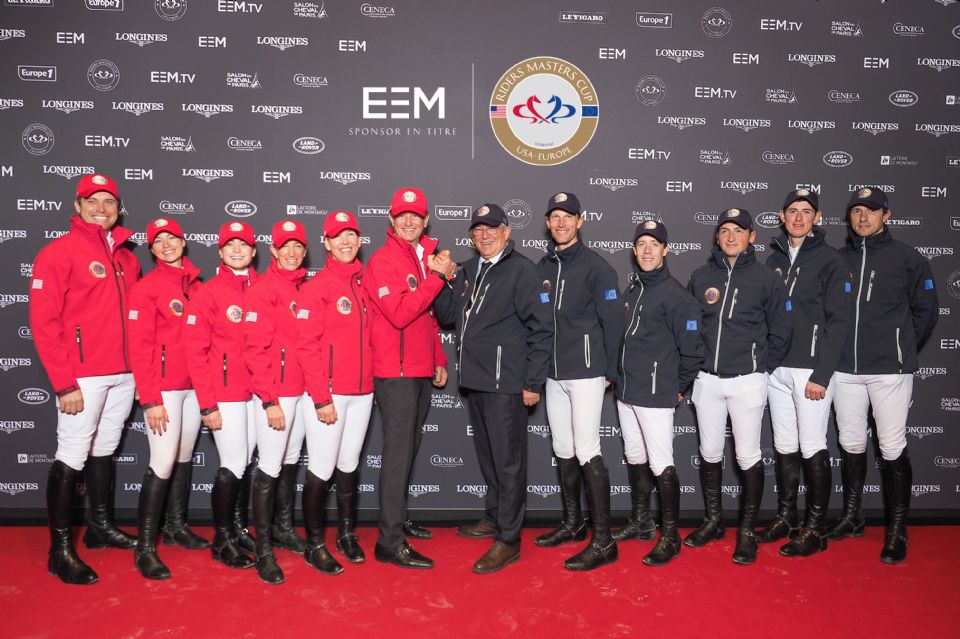 Europe topped the USA in round one of the Riders Masters Cup in Paris, France.
Photo by Laurent Vu for EEM

A brand new type of equestrian competition premiered today at the Longines Masters of Paris, pitting the United States and Europe against each other in an exhilarating head-to-head matchup. Presented by EEM, in collaboration with the European Equestrian Federation (EEF), and with Longines as a founding partner, the initial stage of the two-round Riders Masters Cup captivated the Paris audience at the international Longines Masters Series. The heart-pounding competition will culminate with the second and final showdown taking place on April 28, 2018, during the inaugural Longines Masters of New York.

EEM CEO Christophe Ameeuw stated, “When we decided to move our American Leg of the Longines Masters to New York, we were living a dream to jump on the grandest stage. Our show has become known for combining glamour, lifestyle, and gastronomy with the best in show jumping; a true 6* experience! We are thrilled we have the opportunity to bring an exciting new competition along with it. The Riders Masters Cup brings the best of equestrian sport together with exhilarating team competition and is a showcase for the exhilarating event in the world’s biggest media market.”

A new annual equestrian competition, the Riders Masters Cup bridges the first and third leg of EEM’s Longines Masters Series, which presents one of the most prestigious show jumping events in the world spanning three continents: Europe, Asia, and North America. Season III of the Longines Masters Series kicked off this week in Paris, travels to Hong Kong in February, and premieres in New York in April.

The passion and intensity from the 2016 Rio Olympic Games continued into the Riders Masters Cup, which featured multiple Olympic show jumpers for both sides. Team USA is led by 1976 Olympian and 2016 USA Olympic Coach Robert Ridland, who brought home the silver medal last summer, while Team Europe’s Chef d’Equipe is led by two-time Swiss Olympian Philippe Guerdat, keeper of the Gold medal from the 2016 Rio Games with the French team. Six of the 10 riders from the two teams are also previous Olympians, including: the youngest competitor in show jumping history to compete in the Olympic Games, 2012 Olympian Reed Kessler of the USA; two-time Olympian and 2008 Olympic Team Gold Medalist Laura Kraut (USA); a member of the 2016 French gold medal-winning Olympic Team and current World #3, Kevin Staut, and more.

The fans were enraptured showing their team spirit as the first two riders took to the ring to kick off the highly-anticipated Riders Masters Cup. Competing on a course designed by 2017 Longines FEI European Championship designer Louis Konickx, Team USA’s Devin Ryan and Cooper faced the daunting competition of current world #3 ranked show jumper in the world Kevin Staut and Ayade de Septon et HDC.  Staut showed an incredible clear round with a time of 59.05, but unfortunately Ryan suffered a tack malfunction forcing elimination.

The powerhouse of female show jumpers then took the reins for Team USA, starting with the second duel of the evening, in which the formidable 21-year-old Chloe Reid and Sally 643 competed against world-ranked #5 Maikel van der Vleuten and Dana Blue from Team Europe. The Team USA rising star evened the score as she raced around the course in a clear round with a time of 64.08 leaving van der Vleuten in the dust after he dropped rails at the first and last jumps.

Laura Kraut and Viper Vrombautshoeve Z took the lead for Team USA with another clear round and a time of 63.01 to beat Team Europe’s world-ranked #10 Grégory Wathelet and MJT Nevados S who had four faults after a refusal at the last jump finishing with a time of 65.85.

Then, Team Europe’s Jos Verlooy and Igor evened the score for Team Europe with a time of 59.84 just edging out Team USA’s Reed Kessler’s and KS Stakki’s time of 60.71.

Every fan in the arena was on their feet, anxiously awaiting the final duel of the first round of the Riders Masters Cup as Team USA’s Lauren Hough and Waterford entered the ring against Team Europe’s No. 4 world-ranked Lorenzo de Luca and Jeunesse Van’t Paradijs. De Luca dominated the course with a time of 60.07 and fans eagerly awaited the appearance of Olympian Lauren Hough. Unfortunately, two refusals forced Hough out of the ring and Team USA fell to Team Europe in the first round by a score of 3-2.

With a close first round and an electric crowd, the second round had riders and horses return to compete over a Table C faults converted course, where three penalties were added for every rail that fell and riders scored two points for each winning ride.

In the first match-up, Devin Ryan of Team USA redeemed himself with a clear round, adding no penalties to his time of 60.16 seconds riding Cooper and scored the first two points for his team after Kevin Staut and Ayade de Septon et HDC had a rail at the final jump and finished with a final time of 62.79 seconds after three penalty seconds were added.

Maikel van der Vleuten and Dana Blue dropped the top plank of the Masters Riders Cup fence, adding three seconds to their time and finishing with a total of 63.12 seconds. Chloe Reid and Sally 643 also had a rail down for a time of 65.09 seconds and gave Team Europe two more points.

“I was lucky this time!” said van der Vleuten.

Laura Kraut and Viper Vrombautshoeve Z had one rail down and missed an inside turn to record a time of 64.84 seconds. Gregory Wathelet and MJT Nevados S came away with the win after they recorded a time of 61.97 seconds despite pulling rails at the final jump.

Reed Kessler scored another two points for Team USA when she and KS Stakki finished clear in 65.38 seconds, besting Jos Verlooy and Igor.

Lauren Hough and Qantas struggled again in the second round, dropping a rail and with a refusal, while Lorenzo de Luca, came back into the ring with the same gusto and took the round once again with a clear round and a time of 68.09.

Team USA now turns its eyes on New York with renewed intensity and Ridland was extremely proud of his team, which included four female riders and faced a dominant all-male team on their home turf. “There was a little bit of the unexpected and a couple instances of bad luck. It’s probably a faster paced action event than we’re used to,” said Ridland.

When asked what he would do differently, Ridland smiled and seemed confident that his team would change the tides when they crossed the Atlantic and head to New York in April. He said, “I would leave a couple more jumps up!! For New York, I think we came in with a pretty good strategy and a very good team. The home field advantage will be for us and in our favor in New York. The spectators, riders, and the sport in general will realize what it’s about after seeing this and I really look forward to that. We’ll give them a run for their money.”

The first edition of the historic Riders Masters Cup will culminate on U.S. soil on April 28, 2018, at the Longines Masters of New York at NYCB Live, home of the Nassau Veterans Memorial Coliseum. Until then, each team will continue training and strategizing in anticipation of their return to the ring next spring with a renewed fervor and the goal of either revenge or continued domination.

Fans can stay updated on the news from each team at www.RidersMastersCup.com and show their support on social media with the hashtag #WaveYourFlag.

ABOUT EEM
Christophe Ameeuw, founder and President of EEM, is passionate about equestrianism and created the Ecuries d’Ecaussinnes in 1997. The Belgian-based stables enjoy an international reputation in the sport horse and top of the range breeding businesses as well as boasting an excellent teaching academy. Organising equestrian events soon became the next obvious step, and Christophe Ameeuw and his teams set themselves the challenge of reinventing show jumping. EEM set up its main office at Ecaussinnes where everything first began, and the development of the “Masters” concept that brings together the best of show jumping, showmanship and lifestyle in one venue is a sign of the company’s continued growth. Following the success of the Audi Masters in Brussels, the Gucci Masters in Paris and inspired by tennis’s Grand Slam, EEM set out to conquer new continents with the creation of the Longines Masters international series. This “Grand Slam of Indoor Show jumping" over three continents in Paris, Hong Kong and New York is now one of the most prestigious equestrian events in the world. In 2017, EEM added a new emblematic competition to its other prestigious events. Presented in partnership with the EEF (European Equestrian Federation), it is a battle between the two great birthplaces of show jumping, Europe and the United States. Information about EEM: www.eemworld.com.

ABOUT THE EEF
The European Equestrian Foundation (EEF) was founded in February 2010. As a young and modern organization, the EEF strives to promote the values of equestrianism, educate its members and works closely with all the independent organizations to maximize the sport’s potential in Europe. As most of the major equestrian events take place in Europe, the EEF embodies the highest level of expertise and experience in the equestrian sector. Information: www.euroequestrian.eu.