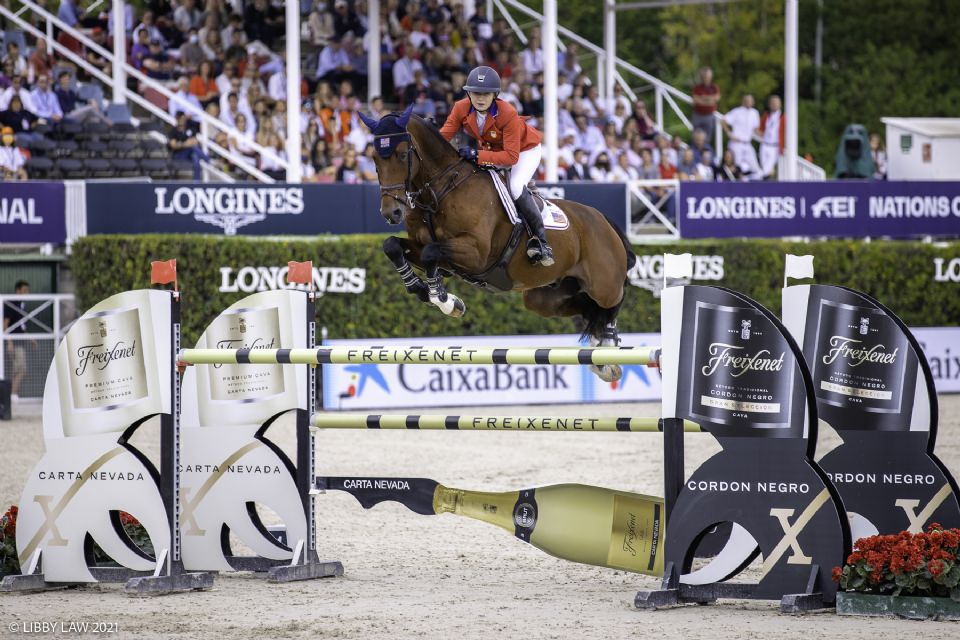 The NetJets® U.S. Jumping Team will advance to the final round of the 2021 Longines FEI Jumping Nations Cup™ CSIO5* after a sixth-place finish in the first round on October 1, 2021, in Barcelona, Spain, at the Real Club de Polo de Barcelona. Led by Chef d’Equipe Robert Ridland, the team consisted of Lillie Keenan, Laura Kraut, Schuyler Riley, and Spencer Smith.

The tracks for the event are set by Spain’s own Santiago Varela, the Tokyo 2020 Olympic Games course designer. The first-round course proved challenging with a tight time allowed of 80 seconds.

Germany led the way in the first round, while Spain finished in second and The Netherlands was third. The U.S. team finished tied for sixth place with 10 faults, but achieved the overarching goal of finishing in the top eight and advancing to Sunday’s final.

“As we all know, finishing ninth is not a whole lot of fun, and we’ve had experience with that,” said Chef d’Equipe Robert Ridland. “We live to fight another day.”

The U.S. will bring the same four riders back on Sunday, where they will have a different goal from Friday’s round. “The strategy on Friday is totally different than on Sunday,” confirmed Ridland. “On Sunday you’re trying to win the whole thing. On Friday, you’re trying to beat seven other teams. That’s the only objective.”

With Friday’s strategy, Ridland said that Keenan’s time fault was intentional, in order to have a greater chance to leave all the jumps up by taking a little extra time. He explained, “What Lillie did was spot on and exactly what we planned for. Each one of them was just a minor little glitch on the course. It was a solid performance by everybody.”

For more information about the CSIO Barcelona, visit www.csiobarcelona.com.