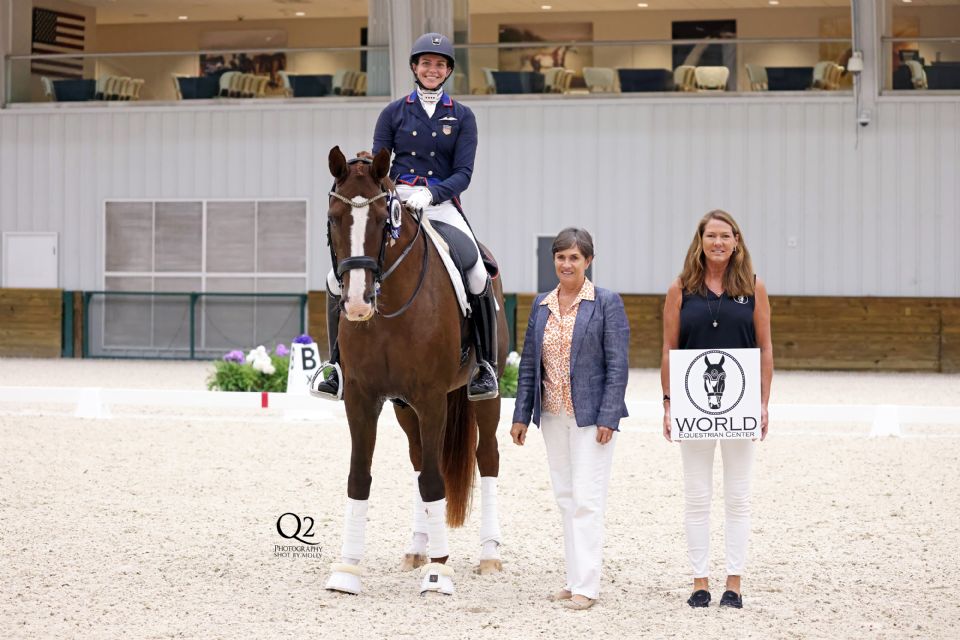 Anna Marek and Duvel in their third winning presentation for the week.
Photo by Q2 Photography 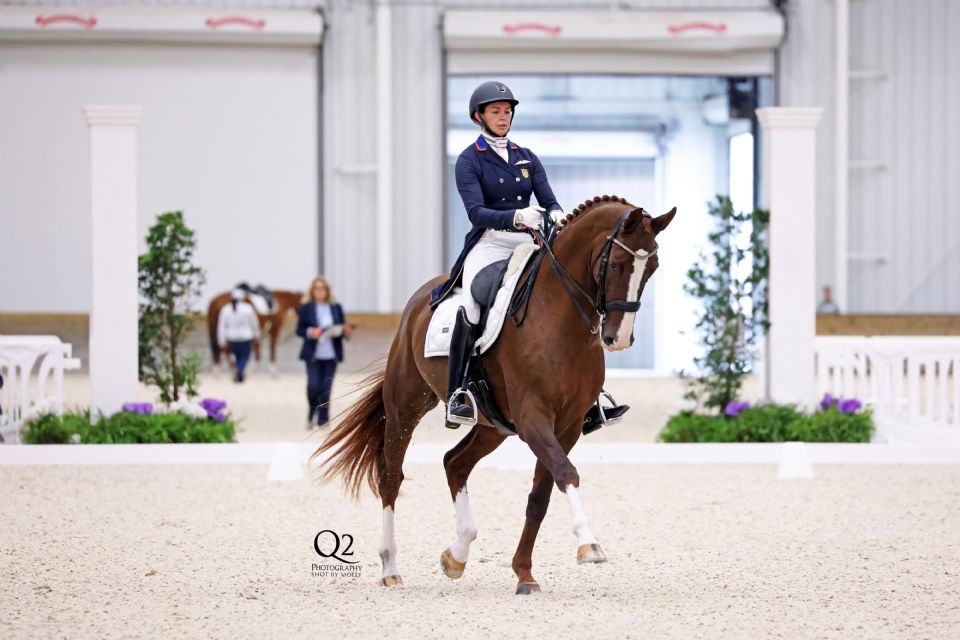 Duvel strutted to a freestyle win to the music of Imagine Dragons with Anna Marek.
Photo by Q2 Photography 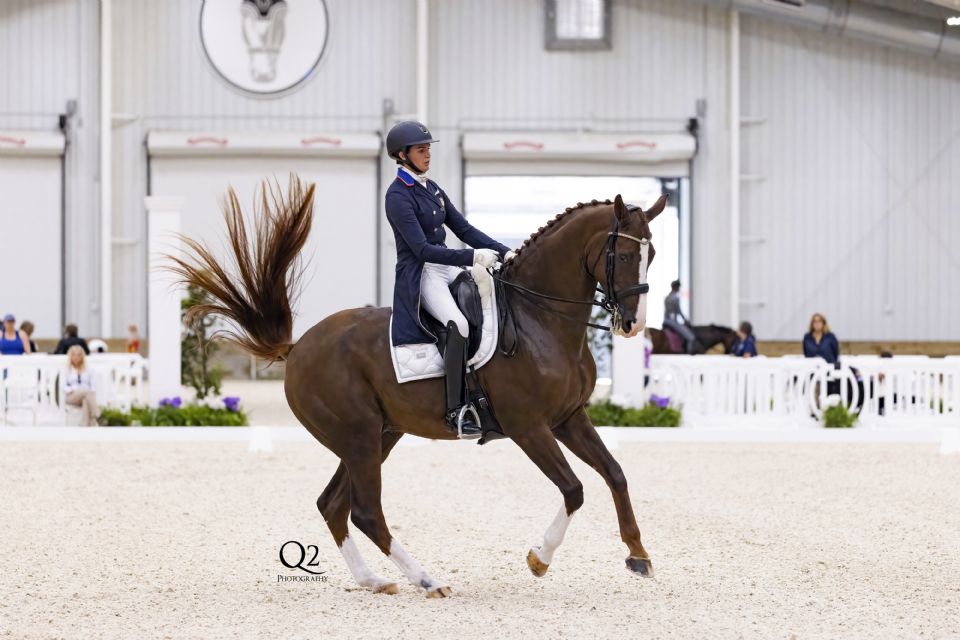 Anna Marek noted that Duvel has made her better at riding canter pirouettes.
Photo by Q2 Photography 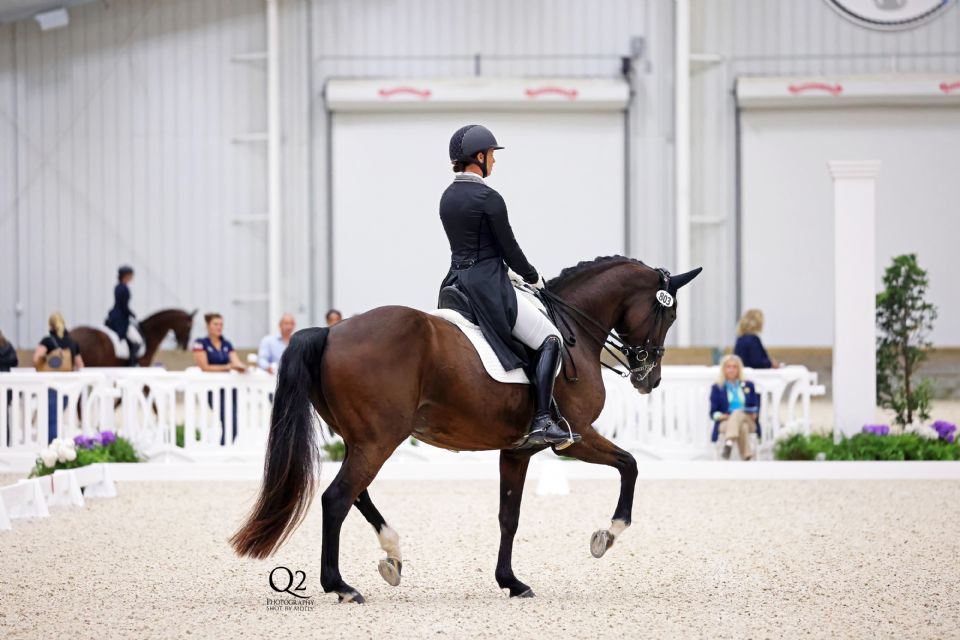 Eline Eckroth and Daphne won the Intermediate II CDI3*, their second victory in the medium tour.
Photo by Q2 Photography 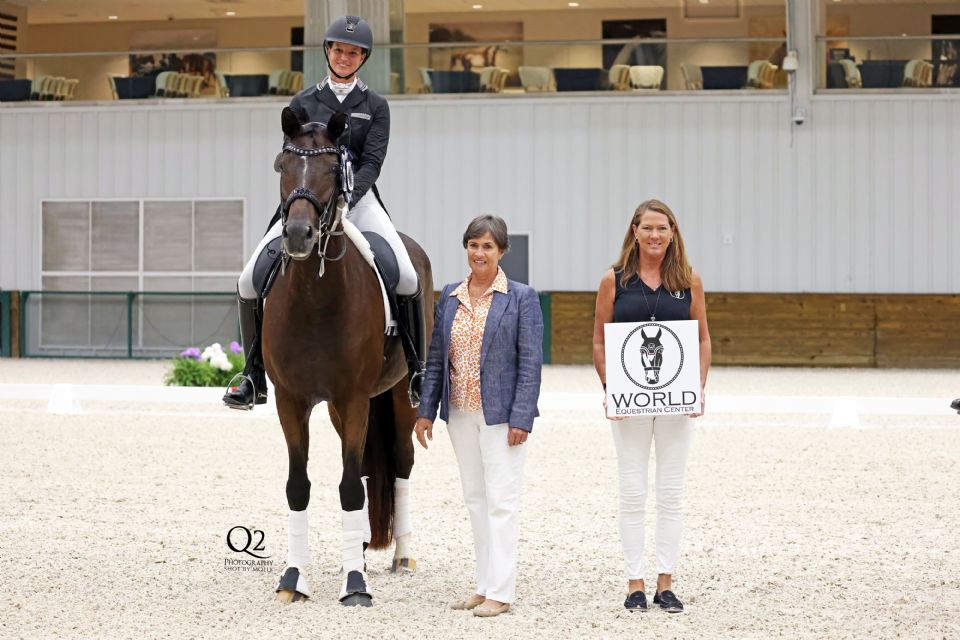 Eline Eckroth and Daphne in their winning presentation.
Photo by Q2 Photography

Marek and Duvel repeated their performance from the CDI3* at WEC in April by winning all of their classes. In Sunday’s I-1 Freestyle CDI3*, they scored 74.710%, with particularly high marks on their choreography and their music, which featured the songs "Natural" and "Believer" from the band Imagine Dragons.

“It suits him perfectly because he’s so big and impressive,” said Marek of the 17.2 hand-high horse’s music. “His owner chose the music a long time ago. She thought it suited his overall appearance and presence. It was his character.”

This was only the second time Duvel has done a freestyle, and Marek noted that they hit all of their marks better than the first time they completed it in April.

She recalled, “Sometimes the freestyle and the music can amp him up, but he was very relaxed in there. I couldn’t have asked for anything better.”

Marek has been particularly gratified to work with Duvel, a 14-year-old KWPN gelding by Florencio, on the small tour movements.

“We have spent a long time perfecting Prix St. Georges and I-1 with this horse,” she said. “I told my coach Anne Gribbons that I feel like I’m always riding those levels and training the horses up and never stay there for a while to really ride them very well. This horse is so solid at the movements, that I feel like I’m going through and riding an easier test because he’s so spot on.”

She continued, “My favorite movement and what he has taught me to ride better on other horses are the canter pirouettes. He has such a good technique, he’s so good at them, and he’s so reliable. I come to the pirouettes and I’m like, ‘This is the easy part.’ On any other horse, I’m always stressed about the pirouettes.”

Marek noted that Duvel has piaffe and passage, and they will show again in the small tour at the CDI3* in November, while a goal is to bring him up to grand prix level in national shows.

Second place with 72% in the I-1 Freestyle CDI3* went to Erin Brinkman (USA) and Fenomenal JW, a 10-year-old Hanoverian mare by Fürst Romancier owned by Julia Whitfield. Shelly van den Neste (USA), the previous rider of Duvel and Anna Marek’s grand prix mount Fire Fly, placed third on her own Ferrarie, a 12-year-old KWPN gelding by Tango, with 69.065%.

With a personal best score of 65.235%, Eckroth and Daphne, an 11-year-old Oldenburg mare by Diamond Stud, captured the win in the Intermediate II CDI3*, part of the “medium tour” division of which they also won the Intermediate A CDI3* on Saturday.

The pair’s highest movement score came from the piaffe, which Eckroth said was a “brand-new thing” this weekend. “She’s been getting better, but we’ve been wondering if it was going to happen in the test, and this weekend it really came together,” she explained. “She felt a little bit tense yesterday, but with the air-conditioning and the schooling, she’s settling in. Today she felt pretty confident and happy to do her job.”

As for Eckroth’s favorite part of the test, she replied, “I love half-passes, and she’s good at them.”

Daphne came into Eckroth’s barn three years ago as a mount for her owner, but Eckroth took over the ride a year later.

“Daphne has so much talent that Connie is gracefully letting me ride her,” said Eckroth. “She’s super fun. She’s just about the best owner that you can have for a horse I think. This year we started with medium tour and hope to move her to large tour by the end of the season.”

Eckroth plans to bring Daphne back to WEC for the dressage competition in November, but it remains to be seen if the mare will move up the grand prix level in the national competition or stay at medium tour in the CDI3*. “We’ve never done a grand prix test with her before,” said Eckroth. “The sky is the limit. We will take it step by step. We are trying to do everything the right way so she builds up and is the best she can be. When she does that, we’ll see where it’s led us.”