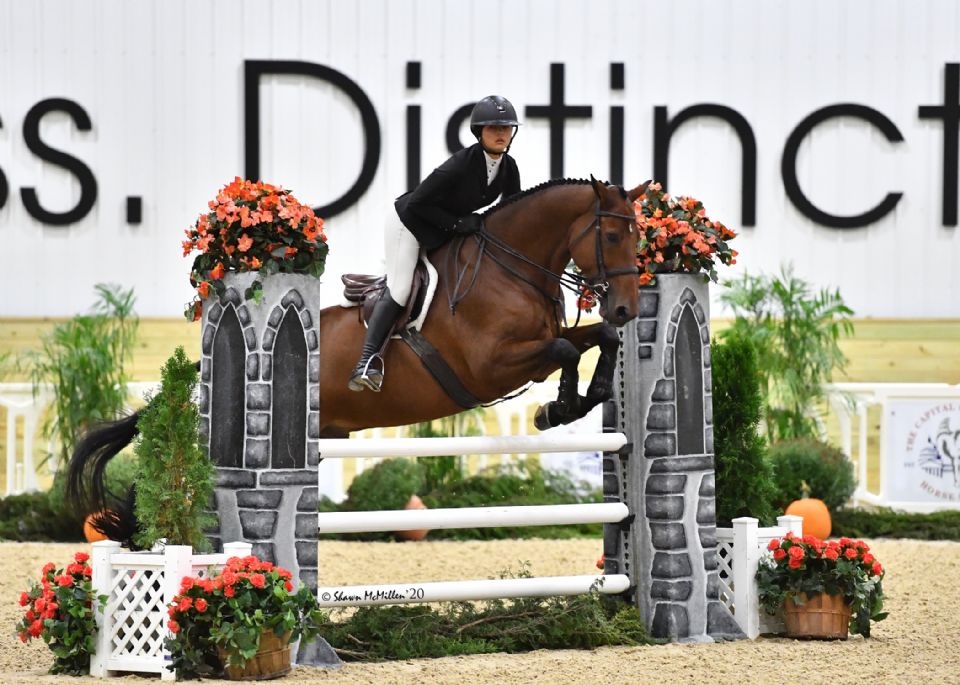 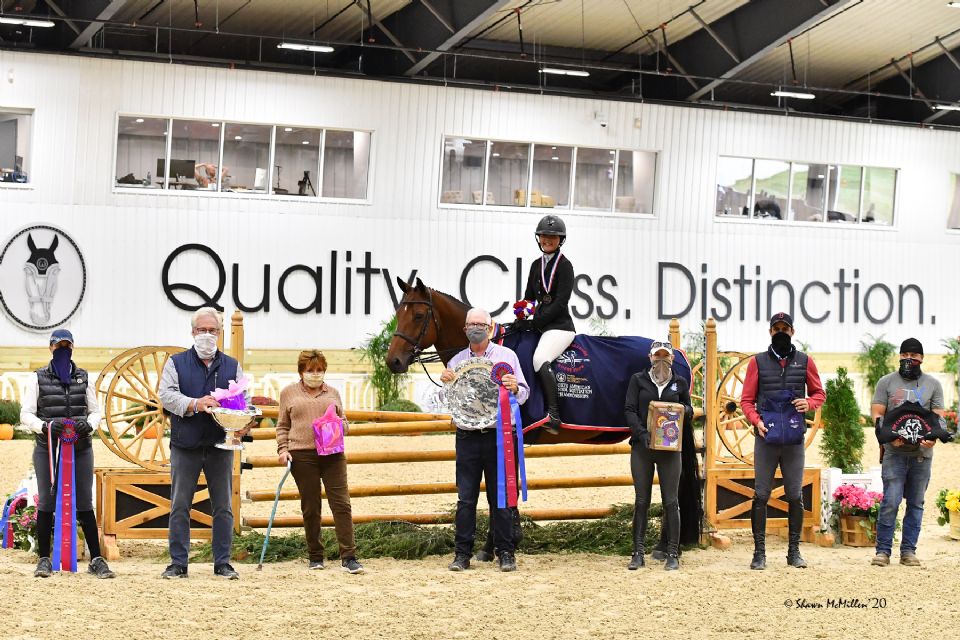 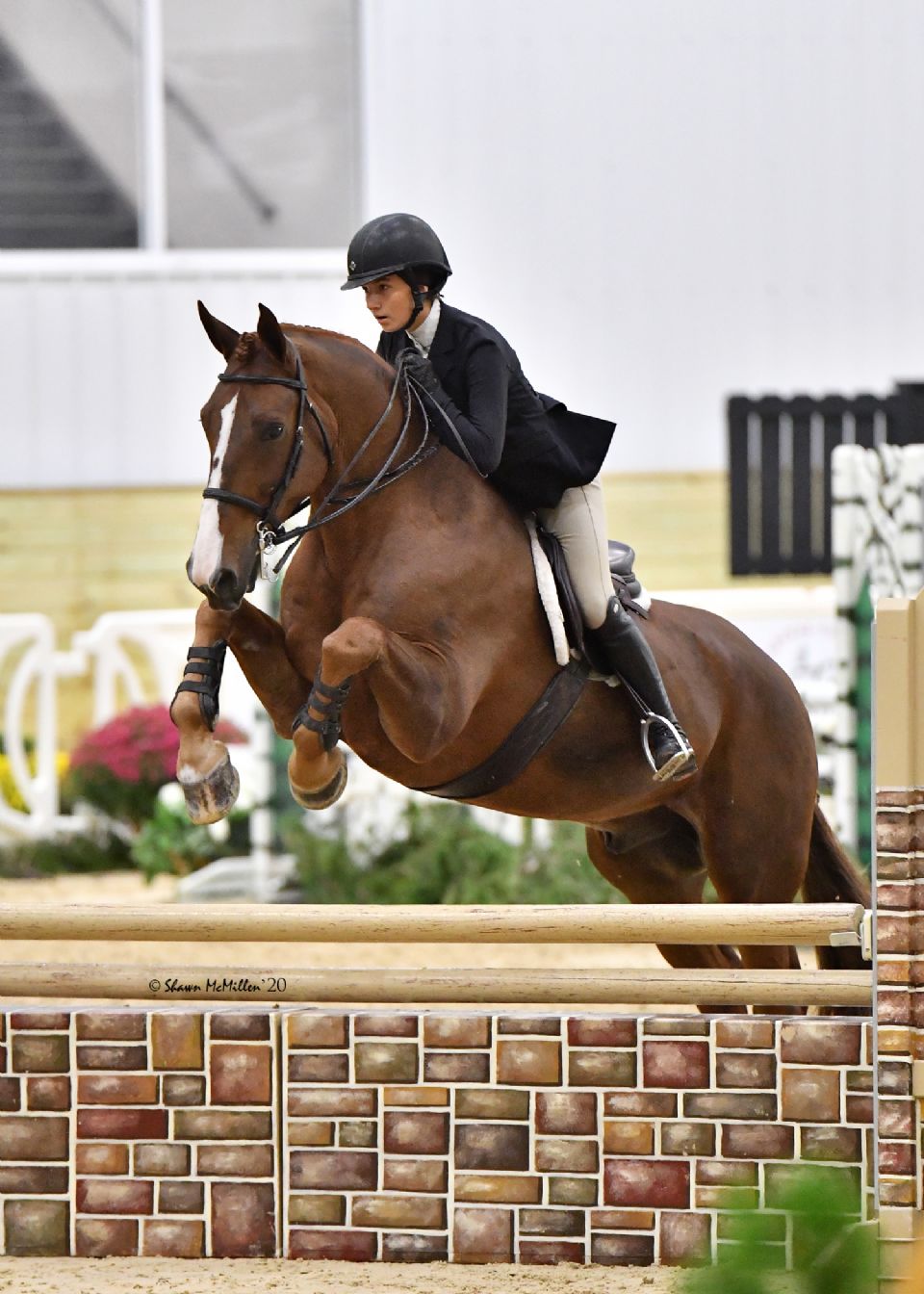 Schuyler Dayner on her way to the win in the THIS National Children's Medal Final.
Photo by Shawn McMillen Photography 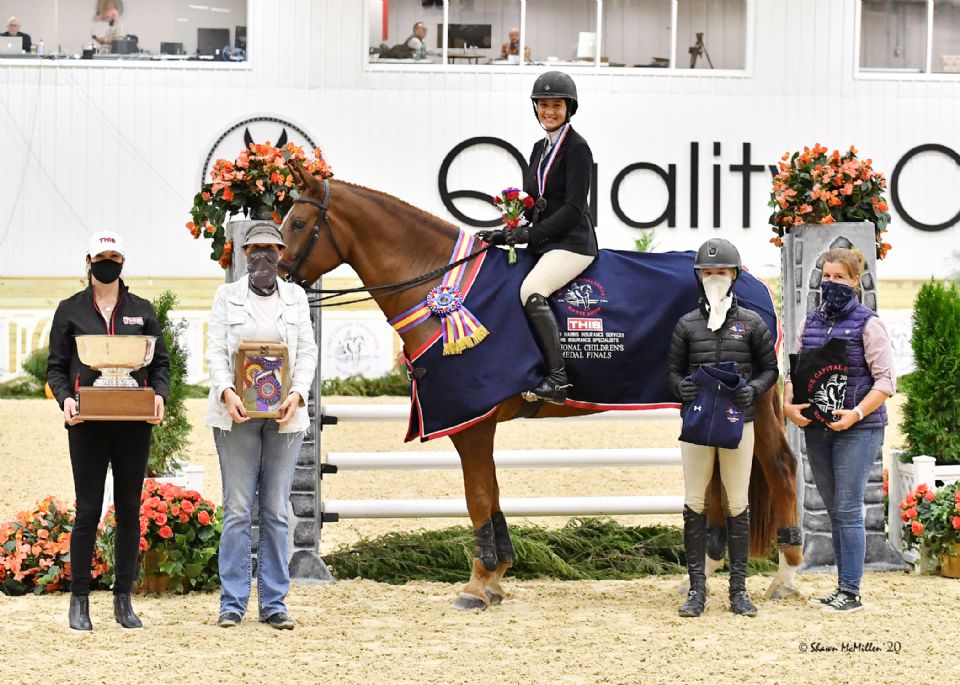 The Capital Challenge Horse Show continues through October 4, but Sunday’s championship finals marked the conclusion of the show’s Equitation Weekend, presented by BigEq.com. Throughout the three days of equitation competition, more than 250 riders contested the featured year-end finals and equitation divisions, including 100 entries in the PBIA North American Junior Equitation Championship.

Following the opening round of the PBIA Equitation Championship, that field of 100 junior riders was narrowed to the top 20 competitors, who then returned in reverse order of their standings for a second round, designed by Ken Krome.

With the first-round high score of 89.33, Rauschenbach was the final rider to return for the second course, and the 17-year-old only further cemented her lead, earning a score of 91.33 for an overall winning score of 180.66.

Second place with an overall score of 177.79 went to Taylor Griffiths-Madden of Wellington, FL. Augusta Iwasaki of Calabasas, CA, rounded out the top three with a score of 175.33.

“It’s amazing to win this; I don’t even know how to explain it!” said Rauschenbach, who is a seasoned competitor in the jumper ring but a newcomer to the equitation division and a first-time exhibitor at Capital Challenge. “This is my first equitation final ever. I didn’t do the equitation really until this year, so in my second round, I was nervous. I went in there and jumped the first line, and I thought, ‘I just need to relax.’ I kind of took a breath, and my horse, Iwan, couldn’t have been any better. He was outrageously perfect.

“He’s only seven, and he goes in and does his job every single day,” continued Rauschenbach in speaking of her Dutch Warmblood gelding. “He doesn’t spook. He’s just so lovely. He’s so game to do anything. I could not love him more.”

Rauschenbach began training for the equitation with Don Stewart in June of 2020, and she is quick to attribute her success in part to this training. As for Iwan’s success, Rauschenbach jokes that it may have to do with the horse’s favorite fruit: bananas.

The EMO Equitation Trip of the Show, sponsored by EMO Insurance and presented to the rider with the highest scoring equitation round over the course of the week, went to Dominic Gibbs of Colorado Springs, CO, who earned a score of 90.5 in the 16-Year-Old Equitation.

The top 44 THIS National Children’s Medal competitors, qualifying from across the country, were invited to compete in the final at Capital Challenge, and the top 10 from Sunday’s first round then qualified to come back for a second round.

“Winning Taylor Harris Finals really felt amazing,” said Dayner. “In my first course, I was just aiming for high 80s so I could make it to the second round, and in my second course I was really nervous, so I was just trying to stay calm and have a nice solid round and keep my scores consistent.”

Consistency paid off for the fourth-ranked rider in the THIS National Children’s Medal national standings, who was aiming to ribbon in her first outing in this final, having attended Capital Challenge two times prior to boost her confidence.

Dayner trains at home with her mother, Heather Dayner, but attended the finals with Stacia Madden and Beacon Hill Show Stables. “At home, we usually work on a lot of bending lines with collecting and going forward,” Dayner said. “In the second course, the first line was a little forward. Then after the in-and-out you had to collect for the six, so I think working on that at home really helped.”

Dayner was aboard her own Gambino, a 13-year-old Irish Warmblood. “He’s a great horse for my first few times at finals and for getting me around some tough courses,” she said of Gambino. “My goals for this year with him were to get a ribbon at Jumping Seat Medal Finals, which I got 10th in; to get a ribbon at Taylor Harris Finals, and to qualify for the Medal and Maclay.”

While Sunday marked the conclusion of BIGEQ.com Equitation Weekend, competition at the 2020 Capital Challenge Horse Show continues on Monday, September 28, with the professional hunter divisions beginning at 7:30 a.m. Learn more and view the full schedule at www.CapitalChallenge.org.