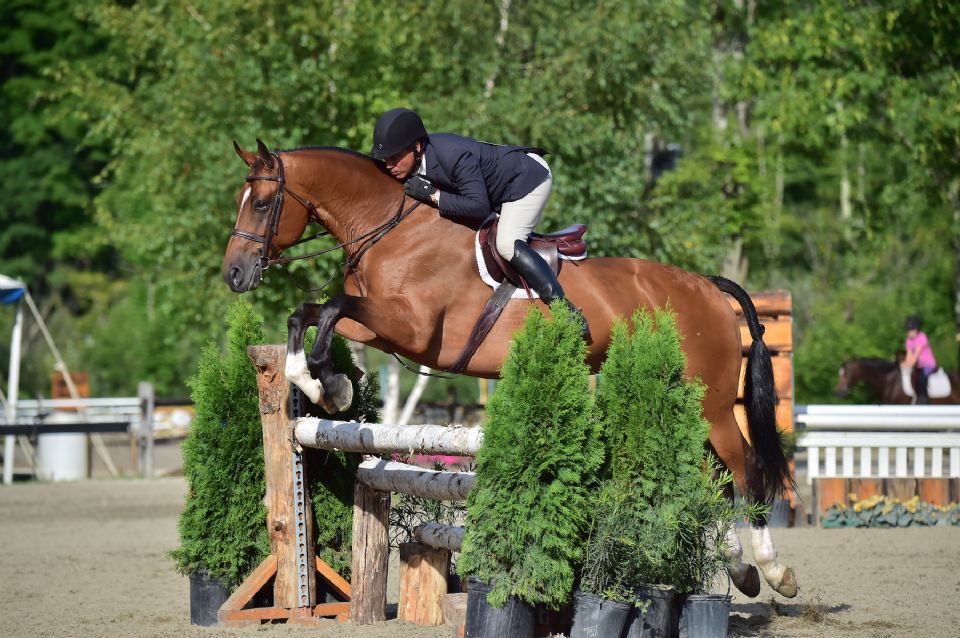 The track, set by Joe Carnicom, spanned two competition rings as it has each Thursday afternoon during the six-week Vermont Summer Festival. Following the first round, the top 12 entries returned in reverse order of standing for a handy course, which again utilized both rings.

Scoring an 89 in the first round, Torano and Lion Hearted returned last over the handy course where they pocketed a 90 to post a final score of 179 for the win.

When he entered the ring aboard Lion Hearted, Torano was in the unique position of already having the class won aboard his second mount Argentus, owned by Isalou, Inc. Because of his multiple rides, Torano returned second with Argentus and earned a handy score of 88, which combined with an 82 for 170. That score sat in the lead throughout the entire second round until it was bumped to second by Lion Hearted.

Donald Bourque of Hudson Falls, NY, and Apollo, owned by Timothy Hooker, finished third with scores of 84 and 80 for a 164 total. Jennifer Bauersachs of Frenchtown, NJ, rode Overjoyed, owned by Courtney Carey, to fourth on scores of 88 and 72 for a 160 total. Kirsten Malacarne of Wakefield, RI, and Kalifornia Dreamin' rounded out the top five for owner Kelley Norton with an 80 and 75 to finish on 155.

Torano imported Lion Hearted as a three-year-old and recently took the ride back over for Beacon Woods. The pair was also first and third over fences in the 3'3” Performance Working Hunter division this week.

“I was really happy with him. He hasn't done much of this stuff, so winning last week and then coming back and doing it again is kind of shocking really,” said Torano. “He was amazing in the handy last week and really good in both rounds this week. He deserved to win the class.”

Torano shined over the handy course on both Lion Hearted and Argentus, who is a nine-year-old Hanoverian gelding (Argentinus x Agenda) he's had the ride on for more than a year. “I went for it on both horses and took all the risks,” he said. “I set up the trot jump and asked for the turns and they responded really well.

The crowd held their breath as Torano cantered much of the approach to the trot fence element of the handy, but he admits the delayed reaction was all part of his plan. “I like waiting to trot in the handy. I figure anybody can trot 20 strides out, I like to trot four our five strides out and really make it handy,” he said. “I asked of the horses and they both came through for me.”

“It was a great class,” said Torano. “What the Vermont Summer Festival does for the exhibitors with this class as the finale is a great thing and they were rewarded with a lot of entries. It was the perfect way to end for the hunters.”

For the win, Torano was presented with a scrim from Mona's Monograms and earned the Kastel Denmark Style of Riding Award for the second week in a row. In addition, all ribbons winner's earned ForeRunner samples from ForeFront Equine.