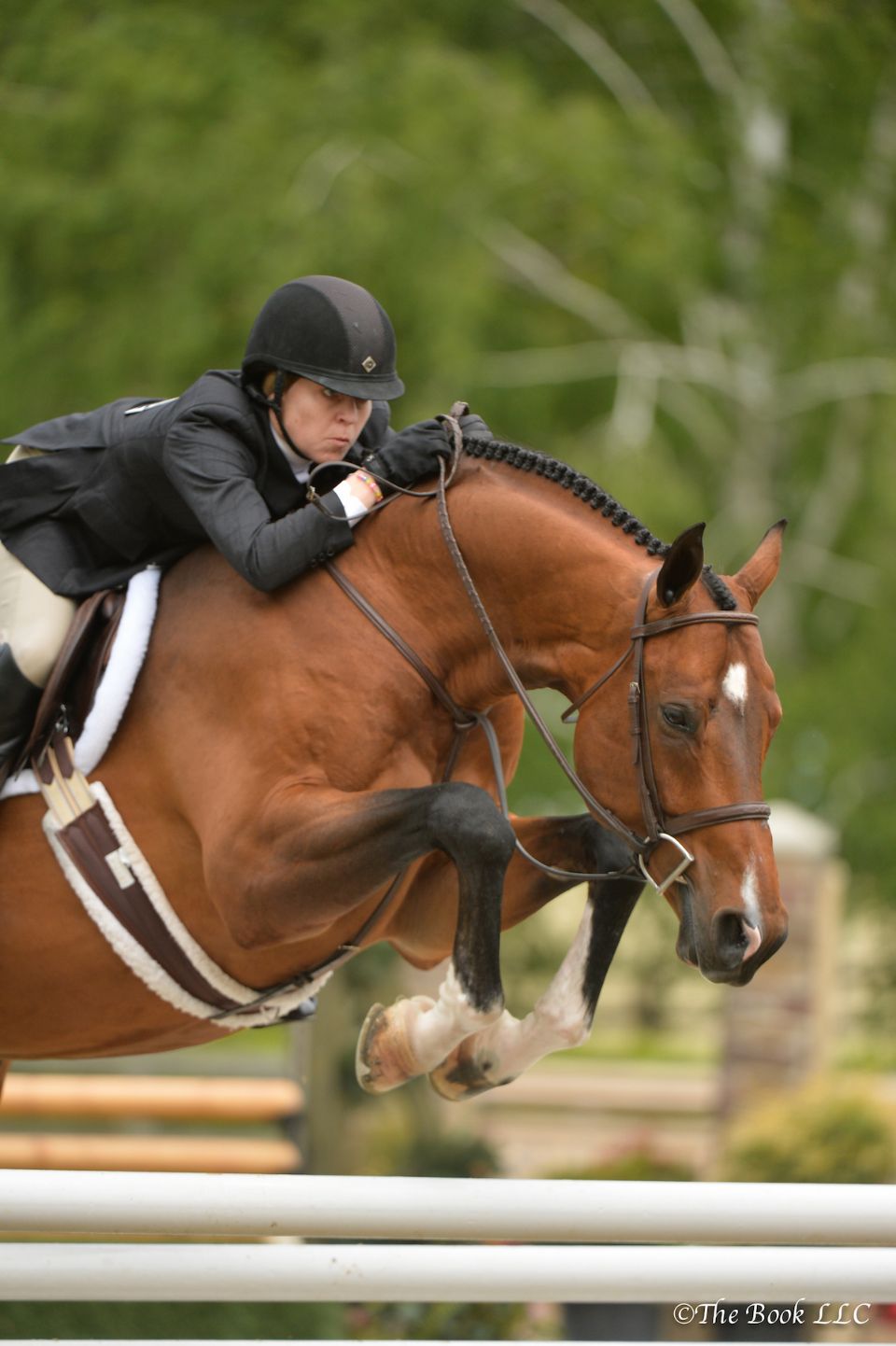 Holly Orlando and William Hill.
Photo by The Book LLC 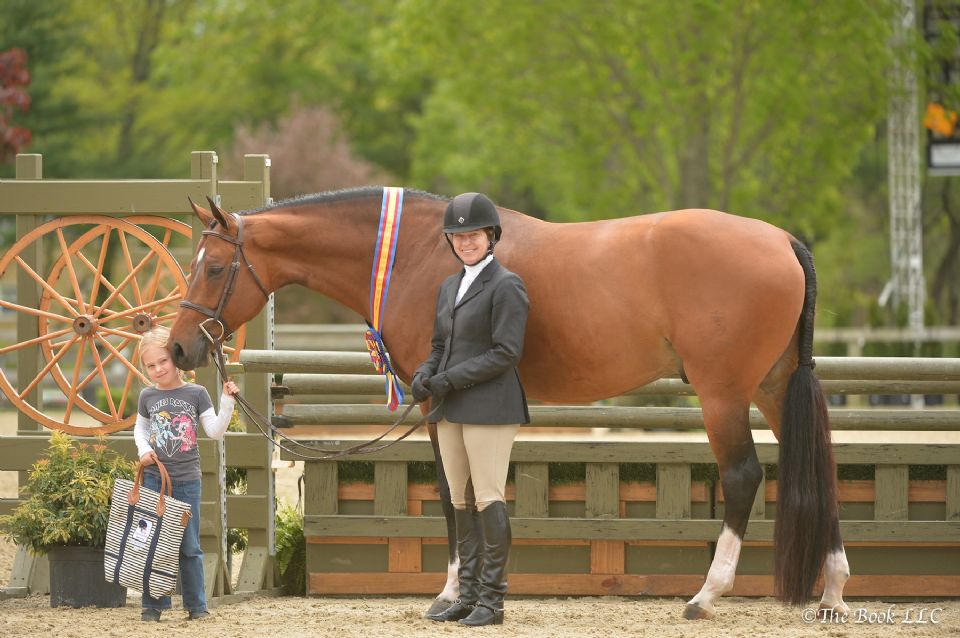 Holly Orlando and William Hill in their winner's presentation with Holly's daughter, Logan.
Photo by The Book LLC 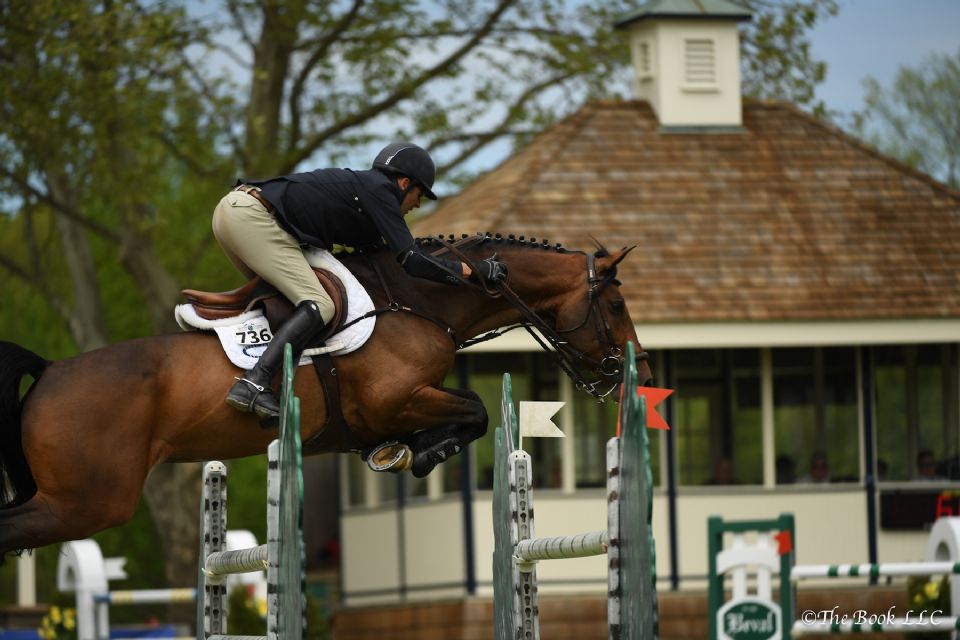 Orlando, who hails from Wellington, FL, had not sat on William Hill before Monday, but got the ride for his owners, the Hymowitz Family of Rose Hill Farm. The six-year-old Warmblood gelding is regularly piloted by Scott Stewart in the Green Conformation division, as well as owner Lilli Hymowitz in the Small Junior Hunter division.

“I was really lucky to get to ride him, without knowing much about him. All I know for sure is what a nice horse he is,” said Orlando. “He is a blast to ride, tries hard, and was perfectly prepared. He's one of those horses that, as soon as you get on, you know you're going to like.”

After only one school earlier in the week, Orlando kicked off the division by winning the model and under saddle on Tuesday before earning the top spot in all four classes over fences, including Wednesday's handy round.

“Winning the model is always a nice place to start,” smiled Orlando. “Over fences, I loved that I could gallop along on him. I didn't know that much about him for the handy, but I took a little bit of a shot at it and he sliced the trot jump and was scopey and game.”

Stewart imported William Hill during the summer of 2014 before the Hymowitz Family purchased him in Florida this February under the direction of trainer Jane Ehrhart.

“Scott brought him up and developed him before we purchased him, and he's always been a calm cucumber,” said Ehrhart. “He's a little bit of a shy horse, but he's never scared of the ring and has always been really consistent for us. We are excited about him, and we were very lucky to have Holly take over the reins for the week.”

After leaving Old Salem Farm, Ehrhart plans for William Hill to head to Devon and then focus on qualifying for indoors this fall with both Scott and Lilli in the irons.

Patricia Griffith and Fetching, owned by Lexi Maounis, were reserve champions in the Green Conformation division. They picked up second place finishes behind Orlando in every class.

Wednesday's hunter competition wrapped the divisions counting towards the $5,000 Leading Hunter Rider Award, which was presented to Louise Serio after her consistent performances throughout the Old Salem Farm Spring Horse Shows. This week alone, she collected 13 blue ribbons, all contributing to the 235 points that crowned her leading rider.

Paul O'Shea (IRL) had not taken the opportunity to test the speed of Skara Glen's Presence before Wednesday's 1.40m, but the stallion was quick to prove he has what it takes to win in the jumper ring. O'Shea and the eight-year-old Holsteiner he owns with Skara Glen bested 49 horses in the immediate jump-off class over courses by Alan Wade (IRL).

“I normally don't go fast on him, but today he felt good, so we went for it,” said O'Shea. “There is no harm for them to go fast sometimes to learn how to do it, and he really responded well. He listened and did it like it was easy.”

O'Shea has plans for Skara Glen's Presence to be a top contender for ribbons at the grand prix level and is off to a great start.

“He's got such a huge stride and is always thinking about where the fences are,” said O'Shea. “He has everything that's needed; he's very brave, very scopey, and very careful. That all makes my job a little easier. ”

O'Shea, who is based out of Whipstick Farm in South Salem, NY, brought Skara Glen's Presence to the Old Salem Farm Spring Horse Shows to gain valuable experience on the grass Grand Prix Field. But, this venue also serves as an anniversary of sorts for O'Shea and Skara Glen's Presence. The stallion first caught O'Shea's eye as a six-year-old while competing at the American Gold Cup with pervious owner, Derek Braun.

“This is a great place to show for any horse, but the young ones really do well here,” said O'Shea. “The ground is really good, and the horses are able to learn a lot.”