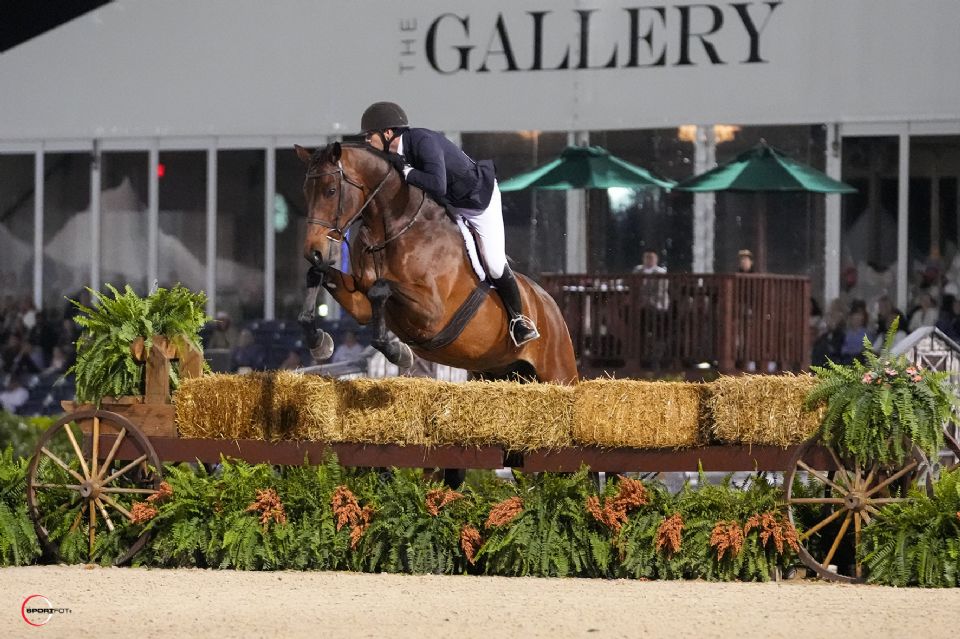 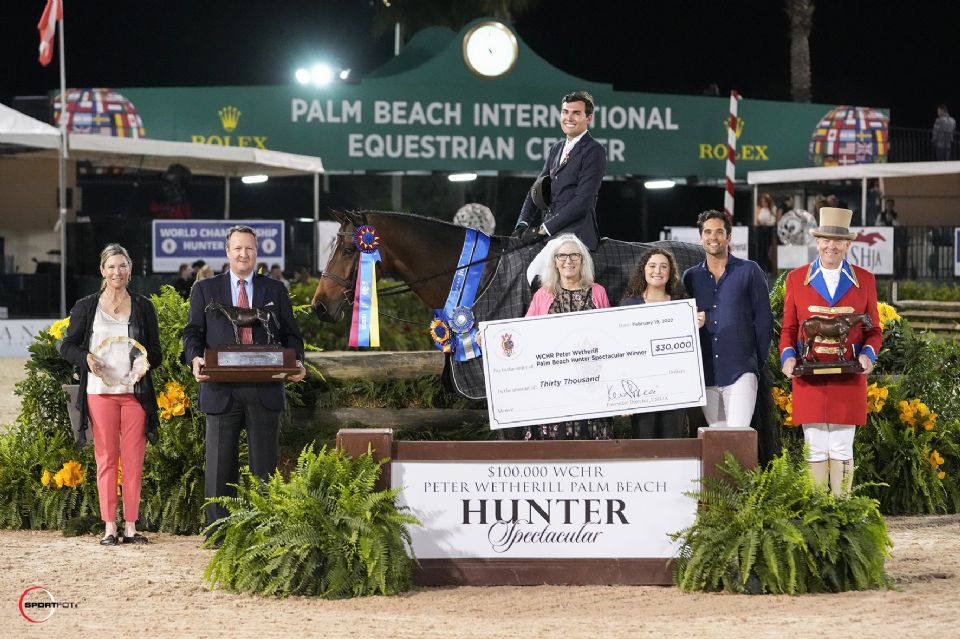 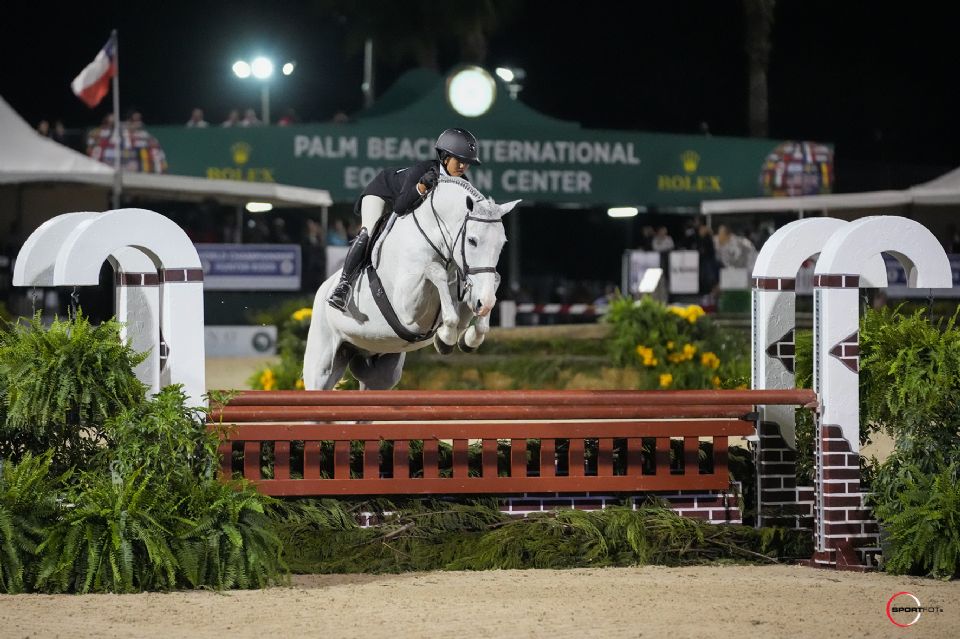 Mimi Gochman and Catch Me.
Photo by Sportfot 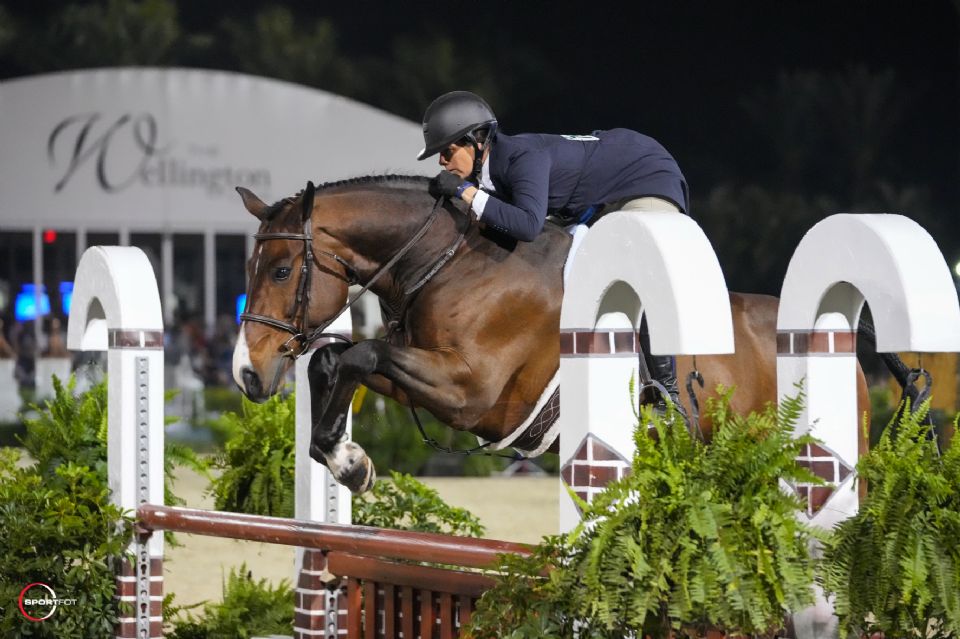 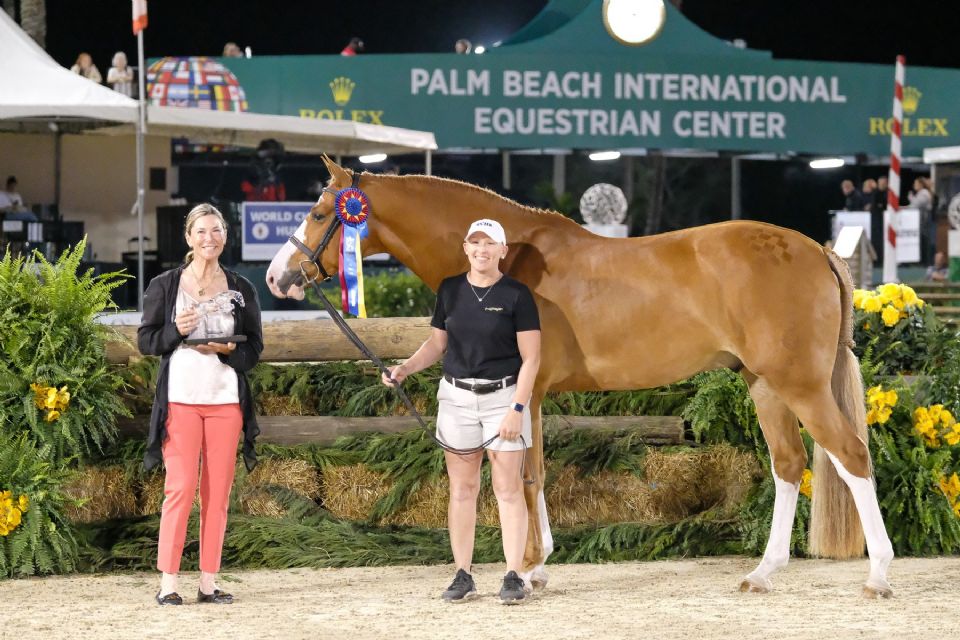 Hesslink and Mon Tresor set the tone in the first round with a score of 90.66. They returned for the second round as the final combination to show over the course designed by Andy Christiansen Jr. that included a walk transition, a post-and-rail option fence, and long gallops to the final two jumps. The pair rose to the occasion and sealed the win with a high score of 90.5 for a total of 181.16.

“I had a plan from the moment I walked it,” said Hesslink of the course. “I don’t know my horse that well, but he does give me a lot of confidence, so I just wanted to stick to the plan and obviously stay calm and not mess it up.”

Hesslink and the 10-year-old Holsteiner gelding by Nekton have only been together since November 2021, but their record speaks for itself as they have been champions every time out, including winning the Performance Hunter 3’6” division at WEF 6 to qualify for Saturday night.

“He is extremely talented and very athletic,” described Hesslink, who hails from Shelburne, Vermont. “Actually, he has a background in three-day eventing, which I think played as a strength in this class in particular. I do know that he is extremely brave and has never spooked at a jump, but yet is quite sharp and athletic and covers a lot of ground. I thought he was confident in doing all of those obstacles today.”

“This has to be one of the most special, prestigious wins I’ve ever had,” he expressed. “I’ve grown up watching this class, and it always held a very special place in my heart. I think it has so much history and prestige that I’ve been fortunate enough just to compete in it, but to win it is really indescribable. I’m very thankful for everyone and everything that helped me get here.”

Gochman started riding Catch Me last year, taking over the ride from her mother Becky and trainer Scott Stewart. Catch Me, a 15-year-old Holsteiner gelding by Casiro I known as “Snoopy” in the barn, won this class in 2016 and 2017 with Stewart. This was Gochman’s second time competing in the Hunter Spectacular.

“I’m super honored to have been in such a great field of riders, and I’m super excited,” said Gochman of her experience. “Of course, Snoopy knows what he’s doing, so that makes it a lot easier for me. He always rises to the occasion at these kinds of events. I’m really glad that I get to ride him and thankful to my mom for letting me ride him, Scott [Stewart] for training me up, and for Peter [Pletcher] and all of my team. I think it’s a huge group effort, and Snoopy always puts the cherry on top.”

Last year’s Hunter Spectacular winners, Amanda Steege of Califon, New Jersey, and Lafitte de Muze, owned by Cheryl Olsten, finished third. They were in second after round one with a score of 90, and a second score of 87.66 gave them an overall total of 177.66.

With a storied career over the past four years, Steege hasn’t taken for granted what “Lafitte” does for her. “Riding that horse every day never gets old, and certainly showing him and being competitive with such a competitive group of horses never gets old,” she said.

Steege only brought Lafitte this week from her regular winter home in Ocala, Florida, and they had a bye into the Saturday night class thanks to last year’s victory. They showed in just one Performance 3’6” class on Thursday.

“He loves showing in any class, but he particularly loves showing in a night class and the night class here with the atmosphere and the amount of people,” said Steege of the 11-year-old Belgian Warmblood gelding by Darco. “I just have a horse that’s a real showman and loves to go out there. I had an amazing time.”

All three riders expressed how important the WCHR program is to their riding careers, how they plan out their show schedule and how it helps them set goals. Gochman, who started in the WCHR pony classes and graduated to the Junior Hunters, feels that “the atmosphere is always bubbly and intense, and it’s something that I hope to continue doing forever,” she said. “I love the WCHR program and shows, and I think that Hunters are always going to be a very important component in my riding.”

Hesslink echoed the sentiment of WCHR having been important to him since his junior years, and now as a successful professional, he bases his schedule around WCHR shows.

“We make not only the Regional, but the National Championships a real goal for everyone,” he said. “Capital Challenge is one of, if not the most, important show for us for the year. The WCHR program means a lot to me.”

Steege agreed and pointed out the fact that having the WCHR program lets horsemen set goals and only compete at those shows that are most important to them.

“I think it’s really nice as a horseman to be able to pick and choose the very best shows and not feel like you have to show at 15 or 20 or 25 horse shows a year to have some real goals,” she explained. “Especially with a horse like Lafitte, this is my fourth year with him, but I’m really hoping to have him for many years to come. I don’t have to show my horse like crazy to have these lofty goals for Capital Challenge and this horse show. I love that part of it, and I love that the horse shows that are incorporated into the program are the most special horse shows out there.”

Riders earning champion or reserve champion in the 3'6" and higher rated WCHR hunter sections qualified for the $100,000 WCHR Peter Wetherill Palm Beach Hunter Spectacular, with additional riders qualifying based on points if the qualified riders chose not to compete or were pre-qualified. In addition, riders also qualified based on their 2021 standings in the WCHR national awards programs.

The class, a two-round Hunter classic, was scored by three panels of two judges, including Chris Wynne and Shane George; Mary Lisa Leffler and Tom Brennan; and Wendy Peralta and Mark Jungherr. The 12 top-scoring horse-and-rider combinations returned for a second round. Earning the highest combined score, Hesslink and Mon Tresor won $30,000 in prize money, the Dark Continent Perpetual Trophy courtesy of Jim Greene, and a custom WCHR jacket and a cooler. Hesslink, as the winning rider, also received the Let's Dance Perpetual Trophy donated by Gene R. Mische. Lafitte de Muze’s earnings from this class, as with all the money he wins in competition, will be donated to the Equus Foundation.

In between Rounds 1 and 2, Champs Elysees, owned by Hallowell Lane Farm LLC and ridden by Patricia Griffith, received the Charlie Weaver Memorial Award for the highest-scoring Conformation Hunter in Round 1 with a score of 83. The Mark Gregory Award, established by Susie Humes, for the best-conditioned horse in Round 1 was presented to Babylon, owned by Marnell Sport Horses and ridden by John French.

The WCHR Kiara Barnett Rider Style Award, donated by Davlyn Farms and Meralex Farms, was awarded to Nick Haness. On hand to present the award was Tammy Williams and Donna Moeckel. Created in honor of Charleston, South Carolina, equestrian and restaurateur Kiara Barnett, the style award is presented to the rider in this class who displays the American style of riding and exemplary sportsmanship outside the ring.

The Wheeler Family’s Cannon Creek, ridden by Hunt Tosh, was named the 2021 USHJA WCHR Hunter of the Year and was presented with the WCHR Peter Wetherill Cup on Saturday night. Since 2011, the USHJA has honored the life and legacy of the late accomplished horseman, Peter Wetherill, by recognizing a current equine athlete that exemplifies the qualities of a top-class show Hunter. Wetherill, who passed away in February 2010, is also fondly remembered as an exemplary owner and an equestrian community advocate who supported the WCHR’s philanthropic endeavors from the start.

With Hunt Tosh in the irons, the Wheeler Family’s Cannon Creek had a remarkable 2021, including winning the Platinum Performance/USHJA International Hunter Derby Championship. The gelding’s success in the High Performance Hunter division at the Pennsylvania National Horse Show, Washington International Horse Show, and many more earned him the honor of WCHR Hunter of the Year.

Jeff Wirthman was awarded the Kavar Kerr Perpetual Trophy for his lifetime involvement in many aspects of the Hunter sport and the WCHR program. The trophy is awarded annually by the WCHR Task Force to an individual who’s demonstrated exceptional dedication, leadership and commitment to the World Championship Hunter Rider program’s philanthropic efforts.

“Whether it be fundraising for the WCHR program or helping create and modify the specifications and classes, Jeff is always there to help and give invaluable guidance. He brings to the table a broad and in-depth knowledge of our sport,” said the WCHR Task Force.

The Palm Beach Hunter Spectacular Gala returned to the International Club and was once again a great success, raising more than $100,000 to support the WCHR program.

The USHJA sends special thanks to the entire Equestrian Sport Productions team for hosting the Spectacular and to Official Sponsors Exhibitor's, CWD, Nutrena, Parlanti and Rood & Riddle Equine Hospital.